The Kindle Fire HDX 8.9 runs on Amazon’s own Fire OS which is such a heavily skinned version of the Android operating system that it’s barely recognisable from something like the Nexus 9. While Google goes for dessert-based names for its updates, Amazon is opting for a drinks theme instead – after Mojito we now have Sangria.

Again, it’s one of those operating systems that’s going to divide a lot of people. It’s becoming easier to use, even if you’re not already locked into the Amazon ecosystem, but it certainly helps if you are. You do still have to make some compromises with elements of the software, such as a native web browser that’s certainly not as slick as something like Chrome, and dealing with some high-profile omissions in the Amazon Appstore.

The new Fire OS 4 is built on top of Android 4.4.3 KitKat, and at a glance the UI hasn’t been drastically overhauled. There’s still the main navigation bar at the top to take you into the different content sections, a stream of recently viewed content at the centre of the screen, and a line of apps at the bottom of the screen which, when swiped down, reveals the app tray. 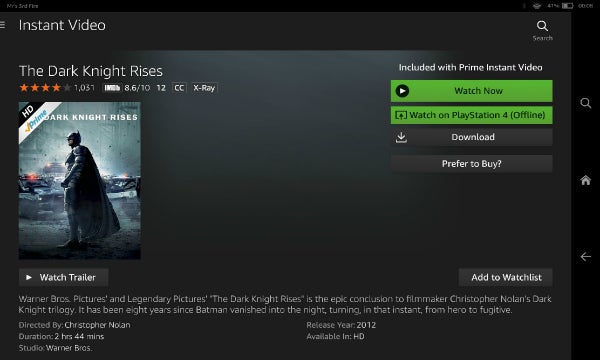 Key features introduced with the last tablet, like Mayday, X-ray for movies and music and Freetime, are all still there. There’s also Goodreads integration, the ASAP queuing feature taken from Fire TV and closer PS4 support so you can send content such as movies to Sony’s next-gen console.

Icons and text appear smaller, but the biggest, most notable changes can be found inside the settings menu. You can now adjust font sizes and there’s new power-management features, so you can turn off wireless connectivity when you’re not using the tablet or even schedule times to switch it off.

There’s bigger changes on the sharing front, too, with the new Family Library feature. This means you can now share books and other content bought through Amazon apart from music, film and TV programmes. Up to six people can take advantage of the Family Library, and it will work with other Kindle tablets and the Kindle Fire phone, as well as third-party tablets and phones that have the Amazon app installed. 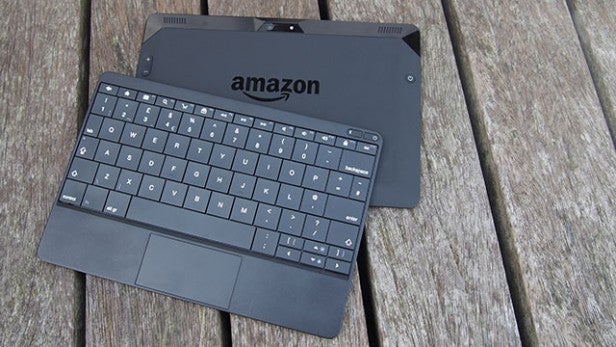 If you’re planning to do some work on the Kindle Fire HDX 8.9, it’s not really something it excels at in the same way that an iPad or something like the Surface Pro 3 does. What you do now get within the Docs section is the ability to create and edit documents and spreadsheets through its WPS Office software.

Doing that is made easier if you invest in the additional Bluetooth keyboard. It costs around the £20 mark from Amazon and is roughly the same size as the 8.9, with a similar soft-touch finish on the back. It’s very basic, with nice big keys and a rough-feeling trackpad. It offers decent travel and we managed to make notes for this review without any frustration of hitting the wrong keys. You’d need Amazon’s origami case or a tablet stand to get the best typing experience, which does mean spending more money, of course.

One of the most contentious aspects of Amazon’s Fire OS is the app support. The HDX 8.9, like the rest of Amazon’s tablet range, supports Android apps which are all accessed from Amazon’s own Appstore. What that means is you’re not getting the same catalogue of content you can find in Google Play. It’s getting better, but it’s unbelievable to think there’s still not an official YouTube app. 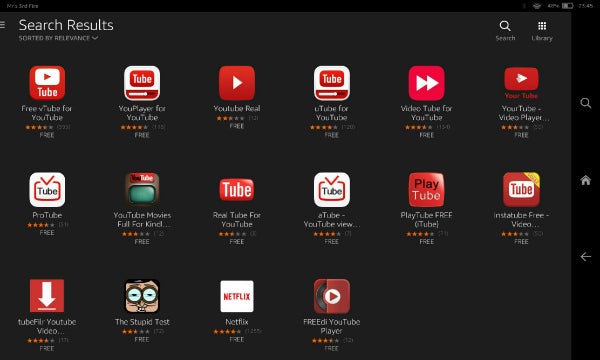 Comparing the top 10 best sellers in the Google Play store and the Amazon Appstore, most were present aside from Worms 3 and a slightly more expensive version of Goat Simulator. It’s £3.07 on the AppStore, in case you were wondering. 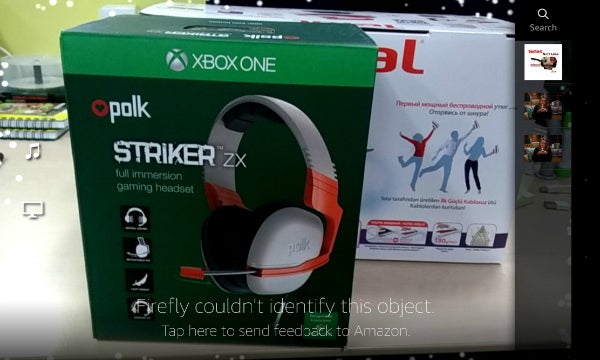 On the native application front, Amazon doesn’t pack in a lot of bloatware. There’s a pretty standard email app, along with one for the weather and a calendar. Then there’s Firefly. First seen on the Amazon Fire phone, this is a feature where you can scan items using the tablet’s rear camera to find out product information or additional details. It also works with music and TV programmes and will help you to purchase them through the Amazon shopping portal.

It sounds like a fun feature, if not something entirely new, but at the moment it simply doesn’t work. While it managed to identify an episode of The Big Bang Theory and lead us to more information about the episode on IMDb, it failed to recognise an episode of Family Guy and actually thought a Tefal iron was a kettle.

Powering the Fire HDX 8.9 is a new 2.5GHz Snapdragon 805 processor with an Adreno 430 GPU to ramp up its gaming prowess, although it has the same 2GB of RAM as its predecessor. That gives it roughly the same specs as the Samsung Galaxy Note 4. The first HDX 8.9 was by no means slow, and while there’s some slight improvements for gaming, it’s much the same everywhere else.

Running it side by side with last year’s Kindle Fire HDX 8.9, there’s not a discernible difference in the way it handles everyday tasks. Apps launch swiftly and there’s no lag when you’re swiping through homescreens or rifling through settings from the notification bar.

The benchmark suggests there’s a greater gap between this year’s and last year’s tablet. In a Geekbench 3 multi-core test, the 2014 edition scores a 3169, while the last generation manages a still impressive 2771. In reality and away from the numbers, this is up there with the best for overall performance.