As part of the Kindle experience, Amazon has created a bespoke interface for its Kindle Fire tablets. The Kindle Fire HD 8.9 runs Android underneath it, however the Kindle interface is so different from the look of Google’s vanilla OS that you might not guess it unless someone told you.

The home screen is a scrolling conveyor belt to bits of digital content you accessed most recently, whether that’s an app, a game or a book. The idea is that most of the time you’ll be able to access what you’re after with just a flick through these. 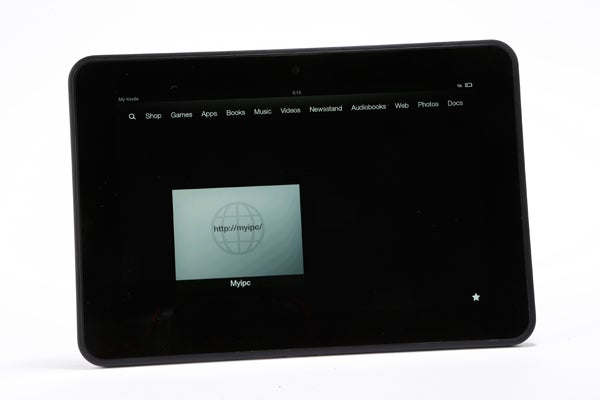 The Kindle Fire HD 8.9’s other contents are laid out along the top of the screen as tabs. These include the web browser, your apps and games stashes and the Amazon apps store. 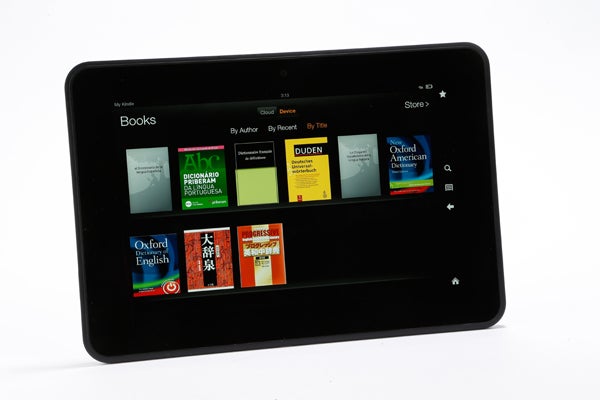 The custom Amazon Appstore doesn’t have quite as many apps or games as Google’s own store, however the Amazon name has ensured it still has a healthy crop. There are now relatively few gaping holes in its line-up.

The Kindle Fire HD 8.9 offers most of the big games and apps you’d get with a Google Nexus 7, but if you’re used to Android in its pure form, day-to-day navigation does take a little getting used to.

Rather than sitting along the bottom as it does in Android Jelly Bean, the Kindle Fire HD 8.9’s main navigation bar is on the right edge of the screen, intended to be operated with your right thumb. Yes, the Kindle Fire HD 8.9 hates lefties – we couldn’t find a way to switch the menu to the left hand-side either.

Although it takes a bit of patience to master, the Kindle Fire HD 8.9 software is nevertheless reasonably accessible. The interface works better here than on the 7-inch version too, giving the navigation tabs more room to spread out.

There is one serious problem, though. It’s just not quick. Compared to a tablet running Android 4.1 or 4.2 Jelly Bean, there are irritating little pauses between transitions that make moving around the interface laborious. 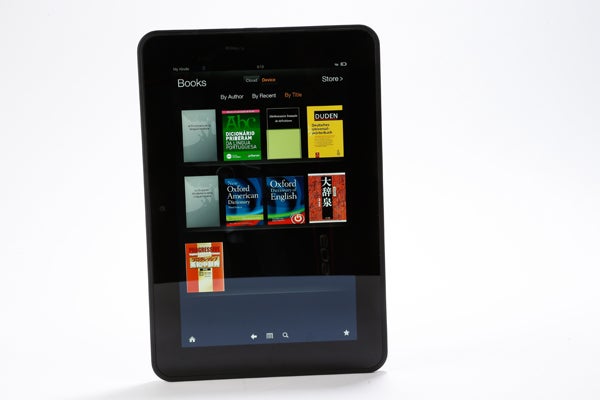 It’s not a case of a lack of power, as the reasonable TI OMAP dual-core 1.5GHz CPU and 1GHz of RAM should be enough to make the tablet fly. It’s more a case of lacking optimisation, and that the software is reportedly based on an earlier version of Android. The Android OS system only became truly slick with Android 4.1 Jelly Bean, which introduced a bunch of speed upgrades on the back of Google’s ‘Project Butter’ optimisation project. The Kindle Fire HD 8.9 doesn’t benefit from this. It also performs terribly when not connected to the net, as so much content displayed is streamed directly from the web, rather than relating to what’s actually on the tablet itself.

However, get into an app or game and performance is much better. It has the grunt to play top-end 3D games like Real Racing 3. You’ll just need a bit of extra patience to wait for the tablet to access the thing.

Although the Kindle Fire HD 8.9 lets you install reams of apps and games, what Amazon really wants you to do is use the tablet to access Amazon’s own services. That’s the Amazon book store, its music store, the video store and the newsstand.

These services combine a few large brands. The book store is Kindle’s, the music store is the same MP3 treasure trove you’ll find on Amazon’s website and the movie hub is LoveFilm, which was acquired by Amazon back in January 2011 for a tidy £200 million.

Amazon doesn’t let you ignore these services too easily, as they’re all given non-removable home-screen shortcuts. But they are all quite excellent, so we don’t mind too much.

The Amazon Kindle Fire HD 8.9 can also play your own content. Within each of the tablet’s sections are tabs for Cloud and Device. The latter lets you play your own music and videos, which you can transfer to the tablet’s internal memory by dragging and dropping them using a desktop computer.

However, codec support is limited so if you want to play files you’ve downloaded from the internet, you’ll likely need a third-party media player app. Several free ones are available from the Amazon Appstore, though.