Let’s be clear right from the start: I have never been all that excited about Killzone 2. I remember all too well the ‘Halo killer’ hype that surrounded the PS2 original, not to mention the disappointment that followed on release. The whole fiasco about pre-rendered footage at E3 2006 left a sour taste in my mouth, and subsequent reports on the game didn’t fill me with much confidence either. Frankly, I might have expected Killzone 2 to be a pretty game – to be an accomplished demonstration of the PS3’s prowess – but did I expect it to be a great game. Nope. 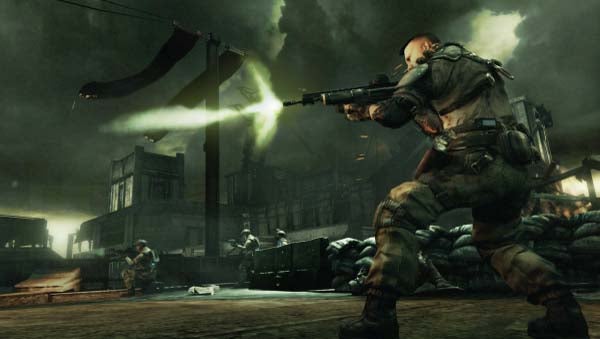 So when I tell you that Killzone 2 is extraordinary, it’s not wishful thinking, fanboy enthusiasm or a case of getting blinded by the visuals, it’s simply my honest opinion of the game. Would I – like some others – go so far as to say that this is the best console shooter ever? No. But it would certainly figure high in my top five.


With all the garlands and rose petals being hurled at Killzone 2, it’s important to stress that it’s not a landmark title in gameplay terms in the way that, say, Halo, Far Cry or Half-Life 2 were before it. Killzone 2 is not particularly innovative; the overall feel is of a slick synthesis of Call of Duty: Modern Warfare, Halo 3 and Gears of War, with the Infinity Ward classic making up the main part of the ingredients. The majority of the levels are fairly linear and the action is heavily orchestrated. Where Gears of War and its sequel stole ideas from other genres – notably survival horror and the Resident Evil series – Killzone 2 plays straight to the standard-issue FPS template. The storyline is classic ‘men on a mission’ stuff, without the dense sci-fi backstory of the Halo games or the melodrama of Gears of War 2. I’m not sure I can think of anything that Killzone 2 does that you won’t have seen before, and a lot of it will be very familiar indeed. 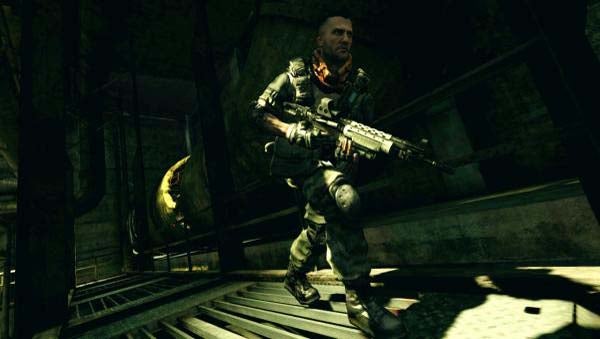 But the key thing to understand is that you won’t have seen it done so solidly and so expertly outside of a handful of titles, including those mentioned above. What Killzone 2 brings to the party is believability, coherence and consistency. Everything, from the incredible visuals to the taut pacing to the generally superb AI, is in place to create one of the most visceral and convincing all-action experiences you’ve ever had on any games platform. When the game is running at full power it’s almost impossible to tear your eyes from the screen. 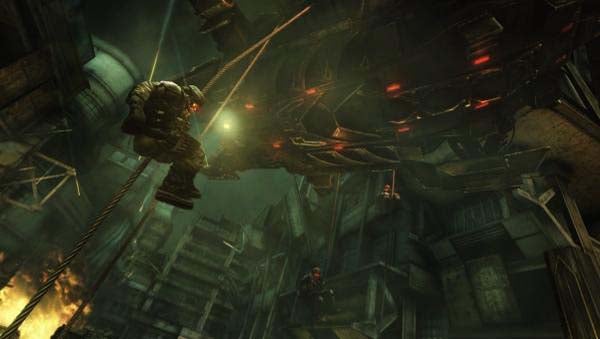 It’s a fearsomely bombastic game, kicking off with a massive-scale assault on enemy soil, as the forces of the Interplanetary Space Alliance invade the planet of the militaristic, neo-fascist Helghast in the aftermath of Killzone 1. Even in the first game, the Helghast has the potential to be an iconic adversary, with their totalitarian imagery and trademark, glowing orange goggles. Here that potential is realised, the game not stinting to put dozens of them on screen at a time, taunting and boasting in a range of slightly thuggish English accents that make them seem half anime villain, half sci-fi Millwall supporter.

The environment is all blast-ravaged, soviet-style architecture and industrial decay, bar the grand, marble-clad state buildings where the Helghast elites hang out. In the midst of the invasion, squads on both sides throwing themselves into the fray, there is bang and bluster everywhere. Outside of the Call of Duty and Gears of War titles I can’t think of a game so determined to assault your senses. The action flows expertly from one explosive set-piece through tense, small-scale skirmishes and brief, relaxed interludes to the next, and Killzone 2 carries this on from level to level to level, jazzing up the formula with a last-stand defence or a nerve-testing incursion into a derelict mining town, but never letting the action grow dull or overly repetitive. It’s a fantastic achievement of sustained games design. 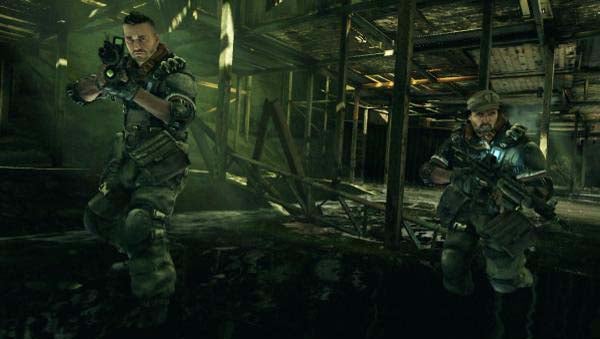 The combat itself is hugely satisfying. First, Killzone 2 has hit an excellent balance between tactical, cover-based gunplay and all-action heroics. Facing superior numbers – and frequently superior firepower – you won’t survive long if you don’t move carefully from cover to cover and learn how to outflank, but at the same time you’re not forced to play Killzone 2 as you would a Rainbow Six or Ghost Recon. The cover system is simple but practically transparent, and the health recharge system works well enough to give you a fighting chance without working so well that you ever feel superhuman. 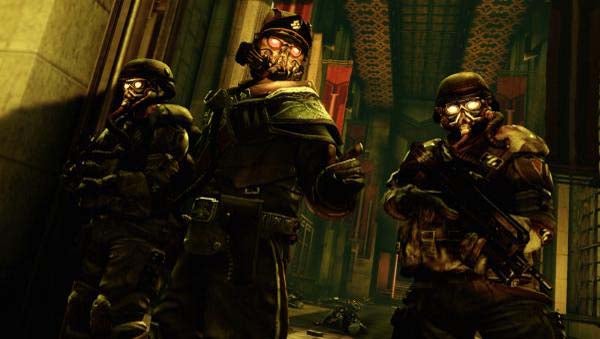 Secondly, Killzone 2 has a fine selection of weaponry. At first, I was worried that we were stuck with a fairly generic selection of assault rifles and sub-machine guns, but as the game throws in favourites like the flamethrower, a high-powered bolt rifle and a fantastic ‘lightning gun’ device, any anxiety on that count soon dispersed. These babies rock, boom and rumble with a real sense of punch and impact. It’s a bit disappointing that you can only carry one weapon and a back-up pistol at a time – the old Halo system is a lot more flexible – but it makes weapon choice one of the big tactical decisions you make at every juncture of the game. Grenade launcher or heavy machine gun? Decisions, decisions, decisions…. 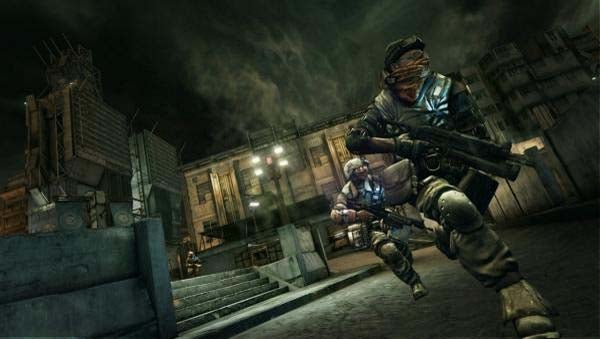 Thirdly – and most importantly – the Helghast are the most fearsome adversaries I’ve seen since F.E.A.R. They use cover intelligently, but don’t loiter behind it in the ‘shooting gallery’ style of Call of Duty. They’ll work in concert and try to outflank you, but you’ll also get have-a-go Helghast heroes who will try bold, frontal assaults, and sneaky snipers who will constantly move into position to exploit some weakness to their advantage. Not since Monolith’s flawed FPS favourite has a game had me trying out so many strategies for different situations, hopeful that this time my choice would work. And as with Halo, your enemies are unpredictable. What nearly worked last time might not work so well when that last checkpoint reloads. Your computer-controlled allies aren’t so smart – ignoring close enemies and wandering directly into your stream of fire are regular issues – but you can trust them to lay down suppressive fire while you move to a stronger position, and their foul-mouthed, Full Metal Jacket/Aliens-style dialogue adds a warm, human presence to the slaughter. When Killzone 2 really lets loose on a full-scale battle, the sense of taking part in a sci-fi war is about as good as it gets with current console hardware.

Now, the visuals are astonishing. I think the ‘ruined beauty’ of the Gears games and the lush jungles of Crysis are the only serious competition Killzone 2 faces in the all-action genre. Yet again there’s a feeling that it’s not all about grandeur or epic scale, but about creating a convincing world. Friend and foe alike are superbly modelled and animated with a real sense of character. The lighting is gritty and hugely atmospheric, and no expense has been spared on lavish surface treatments, dust swirls, volumetric fog and dazzling particle effects. Like the Gears games, it’s the details that make all the difference, from flags and banners flapping in the wind to the way that everything emits or reflects light as you might expect. 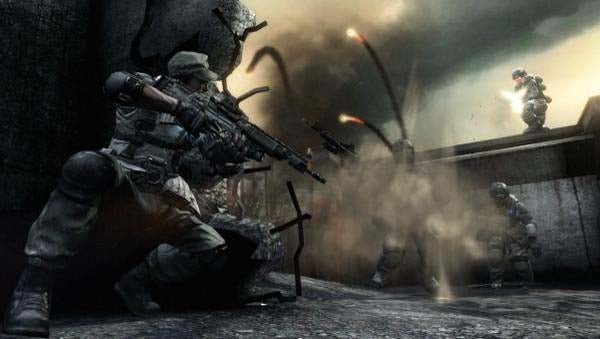 I’ve yet to see any game – even Crysis – that can 100 per cent transport you to a warzone, but played on a great big screen with surround-sound blaring in your lug’oles, Killzone 2 comes awfully close. What’s more, it manages this while still being a hugely cinematic game, the action seamlessly transitioning to cut-scene and back again, with the latter sequences never outstaying their welcome and becoming surprisingly emotive as the game goes on. It’s a big, old-fashioned macho tale, but Killzone 2 isn’t nearly as simple or as dumb as it first appears. 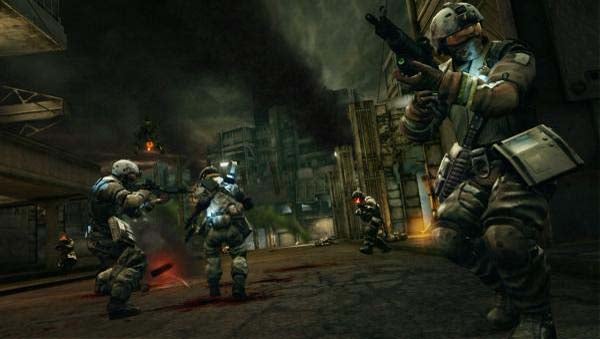 The single player campaign is fairly short – you can easily crack it within eight to ten hours of play – but it’s a definite case of all killer, no filler. It’s also the sort of game that you’ll be happy to replay on a harder difficulty level. It’s the multiplayer, however, that should give Killzone 2 its longevity. I say ‘should’ because, at the time of writing, I’ve had very little chance to sample it outside of botmatches, but what I’ve seen shows plenty of potential. The class system and array of game modes again put you in mind of Call of Duty: Modern Warfare, and the maps and weapon sets are well designed for 32-player mayhem. Game types include assassination, search and destroy and control point games on top of the basic deathmatch options, and the game cleverly mixes them together in matches that alternate in type from round to round. Kick me in three month’s time if it doesn’t work out, but I think Killzone 2 will be a mainstay of PSN for some years to come. 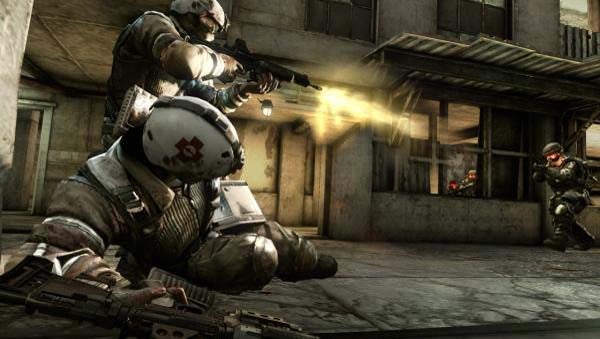 There are some disappointments. The lack of a co-op campaign is practically unforgivable, particularly in a game where you’re just one member of a constant four-man squad. It’s also annoying that, while you can heal team-mates, they never have the courtesy to do the same for you. Finally, a couple of boss battles degenerate into the sort of affair where you’re either under so much fire or in constant danger of a one-hit kill that victory is more a matter of persistence and good fortune than tactics or genuine skill. None of these things, however, spoil Killzone 2 so seriously that you can feel anything less than awe. It’s not the best FPS ever, nor is it the sort of game that redefines genres or sets new benchmarks. It is, however, the most convincing demonstration yet of the PS3’s sheer grunt, and one of the finest action games of recent years. Don’t miss it.


While there’s nothing really new about Killzone 2, the phenomenal pacing, stunning polish and overwhelming bombast of the whole experience elevates it to the top tier of FPS games. The PS3 finally has the flagship shooter it deserves.