Available on Nintendo 3DS
Kid Icarus, or Pit as he’s known to fans, is the great lost hero of Nintendo’s classic 8-bit line-up; the guy who could have been up there with Mario, Link and Samus, but somehow never quite made the grade. Resurrected after twenty years in the doldrums, the little chap with wings is now the star of one of Nintendo’s biggest flagship titles of the year. However, this might not be the game that you expect.

Why? Well, the original Kid Icarus was a 2D platform adventure game – a sort of cross between Mario and Zelda with a hotch-potch of Greek legend and Japanese fantasy. From this, we might expect this update to take the shape of a 3D adventure, perhaps a Zelda-like epic with a little flight on the side. Instead, Kid Icarus: Uprising is a weird hybrid, part on-rails shoot-em-up, part third-person shooter/brawler. It features a very idiosyncratic control system and some of the most unusual game mechanics we’ve seen in a Nintendo game for ages. Unlike Super Mario 3D Land or Mario Kart 7, there’s no way that you could accuse the new Kid Icarus of playing safe. 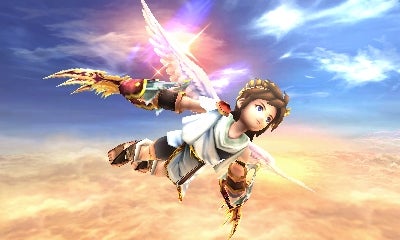 There’s nothing too peculiar about the basic premise. Medusa, goddess of the underworld, has returned from a long exile, and her underworld forces are attacking humanity in a fantasy world that’s only vaguely modelled on ancient Greece. The goddess of light, Palutena, and her angelic envoy, Pit, are the only things standing in her way. Defeating Medusa involves a series of two-stage levels, with the first stage being an on-rails shooter in the style of Space Harrier or Afterburner, and the second an on-foot section which sees Pit navigate the enemy HQ, battling waves of enemies,until he reaches and confronts the final boss.

The controls take some getting used to. The analogue stick controls Pit’s movement, and by quickly double-tapping the stick in the relevant direction, you can make him dash forwards or backwards, or to the left or right. The stylus, meanwhile, is used to aim, both moving a targeting cursor and rotating the view once you near the screen edge. Finally, the left shoulder button either fires off your current ranged weapon or unleashes a close-up melee attack, depending on how close you are to the nasty in your reticule. Left-handed players have a couple of choices, either moving Pit with the face buttons (boo) or buying a Circle-pad Pro and using the extra analogue stick. 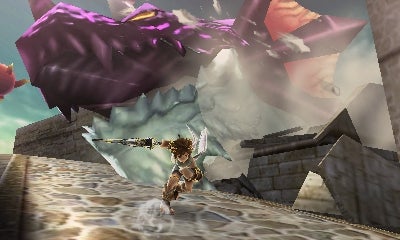 To be perfectly honest, we didn’t really like Kid Icarus: Uprising at first. The controls feel awkward, and while targetting far away is precise and easy, shifting the view rapidly so that you can see what’s going on can be a nightmare. The camera in general isn’t helpful, and double-tapping on an analogue stick isn’t quite as easy as it sounds (and it doesn’t sound that easy – Ed.). The position you have to hold your hand in to play gets agonising after roughly twenty minutes, Most of all, Kid Icarus: Uprising seemed a bit like a waste of the character. How much do you really want to play a simple on-rails shooter, anyway?

Except it soon becomes clear that the game isn’t quite as simple as it looks. Firstly, there are the weapons. Pit starts with a basic bow, but before long you’re collecting a little arsenal of cannons, claws, staves and floating, death-ray firing orbs from downed beasties and sneakily located treasure chests. The more powerful your weapons get, the easier it becomes to storm your way through the underworld’s major nasties, obliterating anything that stands in your path. Getting a new gun or club and taking it for a spin is one of the big pleasures of the game. However, to get the best weapons you need to purchase them from the between-levels store with the game’s currency, hearts. You earn these for slaying monsters, but the payment never seems to be enough to reach the juiciest offensive options. 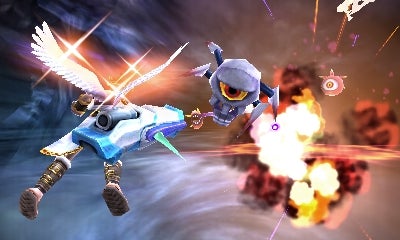 This is where Kid Icarus: Uprising gets clever. Before each mission you set the intensity, changing how numerous and tough the monsters will be and how potent their attacks. Pushing the intensity up beyond the default setting will cost you hearts, but if Pit wins through you’ll get more back, repaying you for your investment. If Pit dies, however, while you can continue, you’ll lose some hearts and see the intensity level decrease. As a result, you’re effectively taking a bet on your own skills, in the knowledge that you’ll actively be punished for any failures.

This doesn’t just make the game more compelling – how far can you push the intensity before you get your sorry behind handed to you on a plate? – it also encourages replay. To get the best guns you’ll need a lot of hearts, so why not go back to an earlier, easier mission and see if you can push it up a couple of notches now that you have more skill. If you want to earn the big bucks, it’s the only way.

Yet there might be another way. Weapons can not only be found and bought, but also combined, and by making different fusions it’s possible to create new weapons with different characteristics in terms of range, melee or ranged effectiveness and damage. In short, for a game that looks very simple, Kid Icarus: Uprising has a surprising amount of depth. 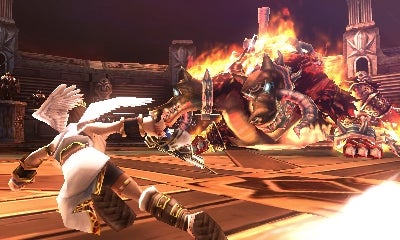 Not only that, but it’s undeniably spectacular. Kid Icarus isn’t just one of the best-looking games on the 3DS, matching Super Mario 3D Land and Resident Evil: Revelations for its scenery, its detail and lighting and effects, it’s also one of the few games to make you realise why Nintendo thought 3D was ever worth it. As you soar across majestic landscapes, over ancient cities and into the underworld’s depths, the sensation of speed and the impression of scale is hugely impressive. It can be hard work on the eyes, while holding the 3DS in position is a challenge, but when it’s working this is the 3DS’s strongest showcase yet.

Unfortunately, it’s still not quite in the same league as Mario’s 3DS debut. Nor is it as emphatically successful a reworking of a Nintendo classic as, say, the Metroid Prime trilogy. Kid Icarus: Uprising nearly has it all, with great creature design, a fantastic and vast range of weaponry and missions that deserve a second play through, but there’s something a bit uninspired about many of the levels – particularly once Pit is on foot – and after a while the game’s repetitive structure begins to grate. 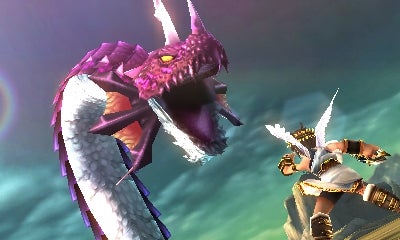 It’s not that there aren’t some brilliant and inventive moments, but there’s also a lot of wandering from one chamber or arena to another, bashing whatever you find there. Ingenious monster design helps keep things varied, with foes that require a mix of melee and ranged attacks, but at times you’re left wishing that Kid Icarus had taken another approach; one less dependent on combat with a little more space to explore.

And while you do acclimatise to the controls, they never become 100% intuitive or entirely satisfactory, not just because they make holding the 3DS so damn uncomfortable, but because they sometimes leave you ill-equipped to handle the action. Pay attention in the early tutorials, because if you haven’t mastered the dash moves by the midway point of the game, you simply won’t survive on any but the lowest levels of Intensity. 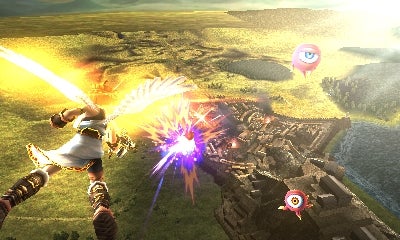 To balance this, Kid Icarus: Uprising still has its thrills, its weapons and its spectacle, not to mention a host of features that we haven’t had the space to cover. It’s a very charming and surprisingly funny game, regularly breaking the fourth wall with silly gags and gaming in-jokes, while the snappy repartee between Pit, Palutena and the game’s various oddball villains would be enough to recommend it to some gamers on its own. It’s also a game that’s not afraid to pull the rug out from under you from time to time. The game even manages to pack in multiplayer, with an enjoyable team-shooter option and a rather chaotic all-against-all deatmatch. If you end up loving it, then there’s plenty here to keep you occupied for some time.

Verdict
Impressive 3D spectacle and some very clever game mechanics make Kid Icarus: Uprising a far more exciting 3DS shooter than it first appears. Uncomfortable controls and repetitive level design ensure that its not quite up there with Nintendo’s best, but the more you put into Kid Icarus’s return, the more you’ll come to love it.