What is the Kenwood Turin SJM550 Kettle?

One of the most premium kettles that Kenwood has in its range, the Turin looks great – all polished steel and superior soft touch plastic. So much quality comes at a price, however – £59.99 to be precise. For a further £44.99 you can pair it with a matching two-slice toaster.

The Kenwood Turin is so polished that it reflects everything around it. Surprisingly, for such a polished kettle it doesn’t get marked or dirty easily. Indeed it’s seemingly impervious to greasy fingers (don’t test this while it’s on!).

Build quality is excellent, as you’d expect for a kettle this expensive.  The lid pops open with satisfying force when you press the release button, which is carefully hidden in the handle. The lid hinges are thick and solid, suggesting it should last a good long time.

The handle is made of soft touch plastic which is both robust and provides more grip than you get from metal or the hard plastic you find on most kettles. A water level indicator is cunningly concealed behind the handle leaving the polished steel clean aside from a Kenwood logo. The indicator measures in both cups and litres making it easy to boil only the water you need.

The Kenwood Turin keeps up its impressive build quality with a small plastic switch that has a small bluish-white light that stays on while the kettle is on the boil. Unlike most kettles we’ve tested the on/off switch is very solid and doesn’t move about at all. 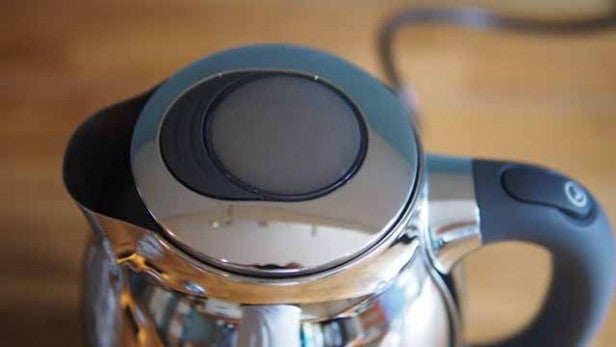 The base is also covered in polished stainless steel and is very stable. It also supports 360 degree attachment of the Kenwood Turin so you can position the kettle in the way that suits you best.

It should be noted that all metal kettles tend to get very hot on the surface so some care should be taken to avoid touching the surface once the Turin has boiled.

The 1.5 litre capacity is enough for five mugs of tea, which should be enough for most households. It’s quick to boil too. One litre of water is ready in 2 minutes and 12 seconds making the Kenwood Turin on of the fastest kettles we’ve tested.

It also manages to keep the water at 90 degrees Celsius when left for 30 seconds and poured into a mug. That’s the perfect temperature for the black tea preferred in the UK and is higher than most other kettles tested.

That speed and temperature comes at a price, however. The Turin is noisier than most kettles. Oddly the noise is at the beginning of the boil rather than at the end as you’d expect. It only lasts for the first 30 seconds and is not too much of nuisance unless you’re trying to listen to the radio or TV or are on the phone.

The Kenwood Turin SJM550 is both a great looking and well-built kettle and while it doesn’t come cheap it should last a very long time. It’s noisier than other kettles but that is offset by its ability to achieve a fast boil and higher than average water temperature.