What is the Kenwood Scene SJM480 Kettle?

The brushed stainless steel Kenwood Scene SJM480 is not the prettiest, but this is a handsome and solid kettle retailing at around £40. Aside from its good build quality it also comes with an impressive 1.7 litre capacity making it perfect for larger households and it can be paired with a matching 2-slot or 4-slot toaster.

The Kenwood Scene kettle has an understated elegance with some neat design features. The button that flips the lid feels solid and is integrated into the top of the handle where it sits flush leaving the lines clean. The water gauge is neatly hidden behind the hard, grey plastic handle so it doesn’t spoil the steel body and the 360 degree base is robust and means you can smoothly move it into the ideal position, whether you’re left or right handed.

While the entire body is made of brushed steel, the spout is made of polished stainless steel which we think makes the whole kettle better looking. One minor criticism is that the clear plastic switch doesn’t feel quite as solid as the rest of the Kenwood Scene. It moves left and right as well as up and down although it does look pretty when the kettle is on as it is lit with a small white LED light. On the flip side when you open the soft touch plastic lid you’ll also notice that the hinges are well. Lids are the most usual failure on a kettle, after the heating element going, but the Kenwood Scene’s should stand the test of time. 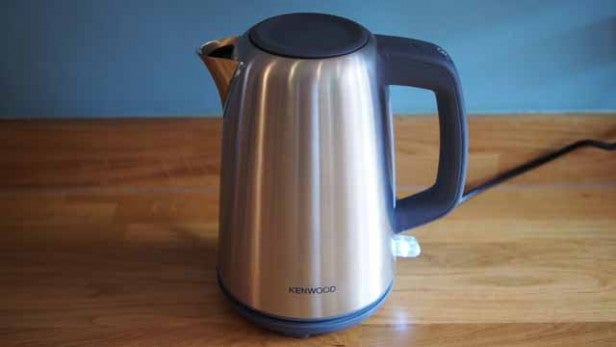 Kenwood have not scrimped on the inside of the kettle either. Look inside and you’re greeted with pure steel, the polished element is concealed which also means the Scene is also easier to descale than other cheaper kettles. A replaceable metal mesh attempts to keep some of the bigger bits of limescale out of your cup of tea and it is fairly easy to fill the Kenwood via the spout.

The plastic base is solid and comes with sturdy rubber feet and a cord management system that means you can tuck the extra cord out of sight.

With a capacity of 1.7 litres the Kenwood Scene kettle is on the large side and will happily make up to six mugs of tea from a single boil. It’s not the fastest though. One litre takes 2 minutes and 22 seconds to boil and the water comes out at a temperature of 85 Celsius after a 30 second wait. That’s a little less than tea purists would like but is in line with most kettles we’ve tested.

As with all stainless steel kettles you should be aware that the Kenwood Scene SJM480 gets very hot on the outside and should be kept well out of reach of children.

We really like the build quality of the Kenwood Scene kettle as well as its large water capacity. It’s built to last which means it’s not the best looking kettle we’ve ever seen but small touches like the polished steel spout and LED power switch give it some charm. There are cheaper kettles out there but they’re not this well made.