As a food processor, the Multipro Express Weigh+ excels. All of its chopping tests were handled well, and there’s a dizzying array of tools and attachments that mean you can do everything from grating, slicing, dicing and chopping to whisking and mixing bread dough. Plus, its weighing function is incredibly handy. However, the blender attachment lets the package down a little – while it’s a good capacity and made of glass, so you can blend soup, it lacks the power of some of the best standalone blenders. That aside, the price for this much kit makes it a great value buy.

Cooking from scratch calls for a multifunctional food processor. Which is something the Multipro Express Weigh+ excels at: it’s a 7-in-1 machine, as handy for basic slicing and dicing as it is a host of other functions, such as whipping and weighing. In this, it’s similar to the Kenwood Multipro Classic, but with more accessories. What this means is that you can effectively dispense with other kitchen kit, saving space, as well as saving time. Thanks to a 1,000W motor, it’s packed with plenty of processing power, so it whizzed through harder food without issue, as well as mixed and kneaded – perfect for keen bakers.

The first thing you’ll notice about the Multipro Express Weigh+ is just how much kit it comes with – there’s everything from a spatula and a dual whisk, to a weighing tray for using the scales by themselves. In contrast, the base is compact and pleasingly light – meaning it can be stored in a cupboard without fuss, and easily moved around a kitchen. There’s so much kit in fact, that there’s a storage bag for most of the tools and an icon guide printed on the base to show what parts to use for different food prep tasks. The front of the base is also home to a display for the scales, buttons for turning them on and off, and for switching between imperial and metric measurements, as well as the speed dial.

There’s enough capacity in the 3-litre food processor bowl for most everyday tasks. I was able to make bread dough using 500g of flour comfortably (it can accommodate up to 600g), while there’s also space to whisk five egg whites or make up to 1.5kg of cake batter. The 1.5-litre blender is also a good size, and as it’s made from glass, can be used to blend soup, although only 1.2 litres at a time. It splits apart for cleaning, which is a must for a thorough clean by hand, although it can also be popped in the dishwasher. Only the whisk head isn’t dishwasher safe. The processor is straightforward to use – the speed dial scrolls up and down smoothly, while the Pulse gives a satisfying burst of speed that’s ideal for foods that can become overprocessed.

Throughout my testing, what emerged was that the Kenwood Multipro Express Weigh+ was a very capable, efficient food processor. Every tool I tried did what it promised, and while the speed doesn’t differ greatly between midway and high, after some regular use, you’ll be bound to get a feel for what works well and what doesn’t.

I started by making white bread dough with the dough tool in place. The scales were useful for weighing out ingredients, especially the flour, which can be tricky to transfer into a food processor bowl from another container without it spilling. There’s the option of pouring in the liquid from the top as the dough comes together, but it worked equally well starting with all the ingredients in the bowl at once. Using a low speed for about 45 seconds, the dough came together into a ball quickly. While the machine strained at first, the tool gently kneaded the dough around the bowl easily after, without wrapping or getting stuck. The resulting loaf rose well.

Next, I used the knife blade to make salsa. I added halved onions to the bowl and pulsed for 5-10 seconds, which resulted in a fairly fine chop. The base shook slightly with larger chunks but stayed steady on the worktop. I used the same tool to finely chop coriander, opting for the pulse to control the consistency, rather than the suggested max speed. I finished by adding tomatoes and garlic on a low speed. The feed chute came in especially handy for pouring vinegar through as they blended. The knife blade can also be used for chopping dry food, so I used it to grind some coconut on Max. This made it finer but once the particles reached a certain size, it tended not to grind much more.

I then used one of the grating discs to grate cheese. While most of it grated well, there were chunks leftover on the disc afterwards, suggesting that a lower speed or different disc might be more suitable for that food. I finished by making a smoothie using coconut milk, yoghurt, pineapple (including the core) and ice cubes. While the fruit blended well, with only a few traces of fibre, the ice mostly escaped the blades and remained as small floating chunks.

You enjoy cooking but not all the fresh food prep that goes with it – this processer takes seconds to handle many tasks.

You’re unlikely to use all its functionality – in which case, a more affordable, or smaller, food processor might be best, such as the Cuisinart Mini Prep Pro.

It’s billed as a 7-in-1, but Kenwood’s Multipro Express Weigh+ is first and foremost a chopping/slicing/dicing food processor, which is something it does well. The addition of scales is useful for weighing in-situ, but unless you’re going to use the other accessories regularly, they may end up sitting unloved in a cupboard. Its ‘Express Serve’ dicer attachment is especially bulky, although its appeal of not having to clean the processor bowl after use could make sure it’s part of your everyday cooking.

Where the Multipro Express Weigh+ could use improvement is the blender – it feels designed more for soups and batters rather than icy drinks. If smoothies are part of your morning routine, it may be best to opt for a dedicated blender, such as Ninja’s 2-in-1.

Unlike other sites, we test every food processor we review thoroughly over an extended period of time. We use standard tests to compare features properly. We’ll always tell you what we find. We never, ever, accept money to review a product.

Used as our main food processor for the review period

We chop common items, which inlude (depending on the processor type), herbs, onions and ice.

We mix a marinade to see how well the food processor can deal with finer ingredients and liquids. 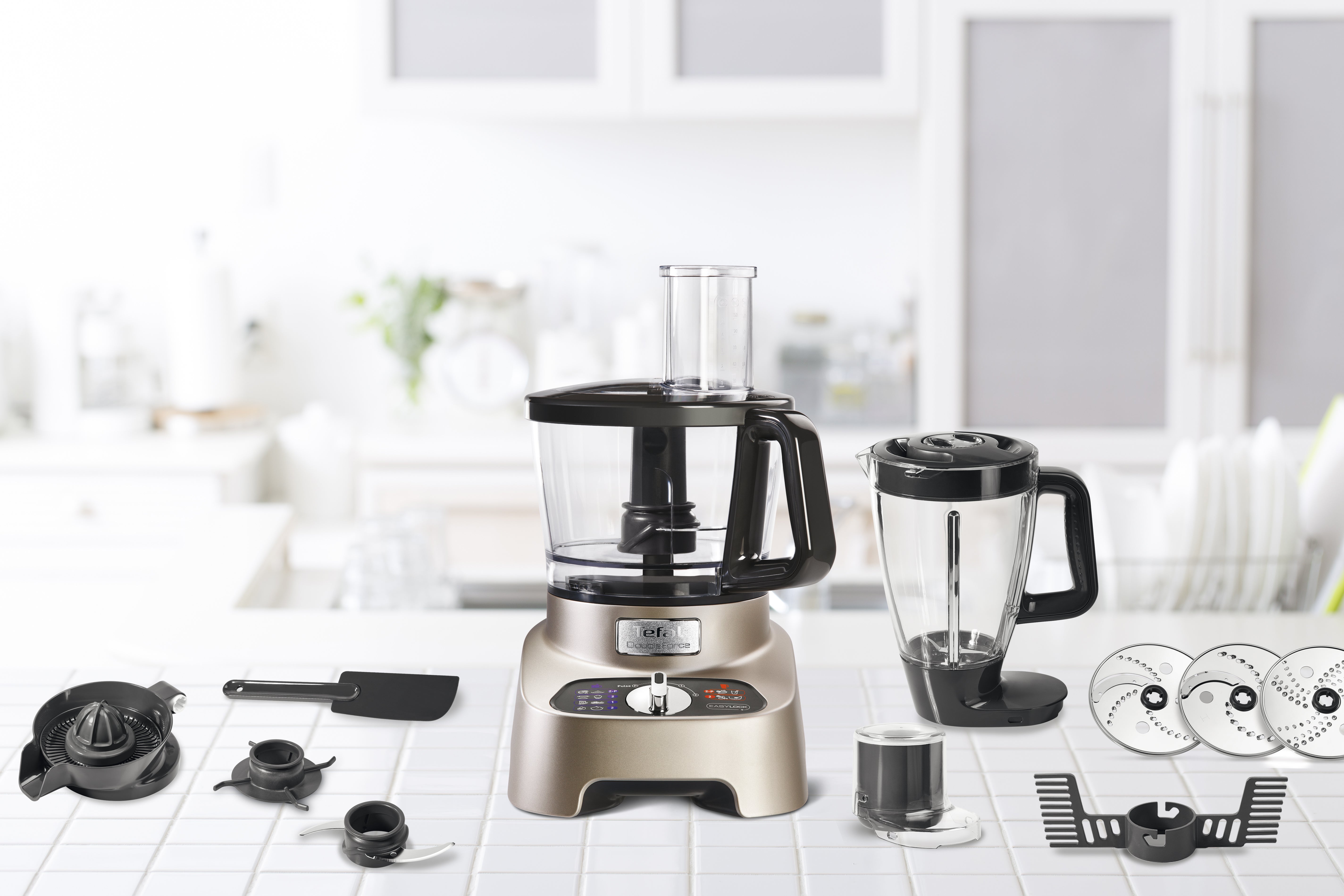 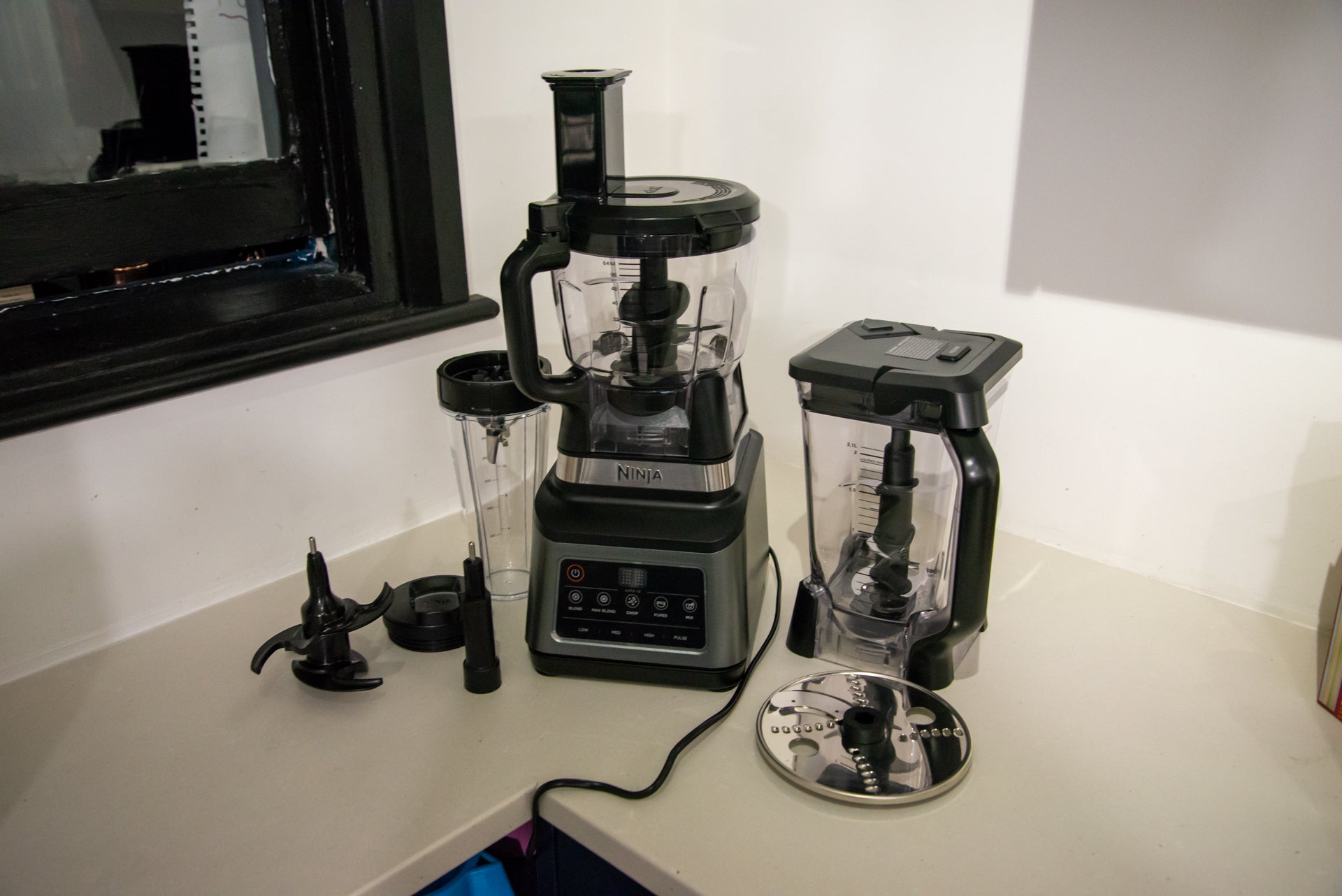 Blender vs Food processor – Which one should you buy?

Does the Kenwood Multipro Express Weigh+ FDM71.960SS have built-in scales?

Yes it does, so you can weigh ingredients straight into the bowl.

What accessories does the Kenwood Multipro Express Weigh+ FDM71.960SS come with?

It has a three-litre bowl, glass blender, citrus juicer, grater and whisk.