What is the Kenwood MultiOne KHH330?

Described as ‘one
solution for everything’ the MultiOne is several small appliances in a
single machine. While it resembles a stand mixer and comes with
attachments for whipping, beating and kneading, it also functions as a
juicer, citrus press, multi-tooled food processor, mincer and blender.

While
this means the compact motor unit comes with a lot of kit to store, the
idea is that the MultiOne can transform effortlessly from one appliance
into another, meaning there’s no need for a separate juicer or food
processor in your kitchen and their accompanying clutter. Capacity
hasn’t been neglected in pursuit of functions, fortunately, as the
generous 4.3-litre mixing bowl can still accommodate 1.6kg of cake
batter, whip up to eight egg whites and handle up to 800g of dough. 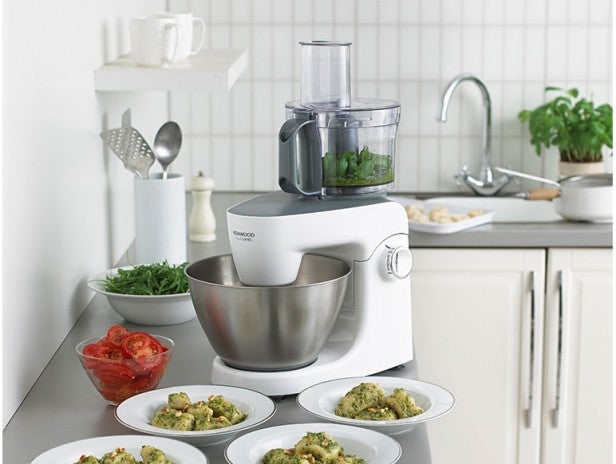 The
fact that the MultiOne only comes in white says a lot about its purpose
in your kitchen – it’s there to work, rather than be a display piece.
Its design prizes function over form, resulting in smooth lines that are
easy to wipe down, plus the motor unit itself is relatively light at
5.28kg. A chunky control knob turns to cycle through six speeds (with
soft start and an electronic speed sensor control that adapts to
different loads) and pulse, while on the opposite side a lever unlocks
the mixer’s head. On top, an outlet cover twists off to reveal a dual
drive outlet that powers most of the attachments.

What’s more
striking is the amount of accessories – laid out they feel like a
Meccano set and cover almost every aspect of processing food. The food
processor alone includes a knife blade for straightforward chopping and
pureéing, while three discs cover thick and thin slicing and grating as
well as extra-fine grating for foods such as Parmesan. However, the
processor has its limits as it shouldn’t be used to grind coffee beans
or sugar.

Kenwood MultiOne KHH330 – What is it like to use?

Any
appliance with so many configurations is bound to have a few issues
when it comes to putting it together, so while the instruction diagrams
were helpful, assembly was still a bit tricky. We started by connecting
the food processor unit and knife blade and added a roughly-quartered
onion, which the MultiOne easily whizzed through in moments, giving a
consistent, fine chop. Most of the attachments can be used on any speed
you like, so processing can be precise. 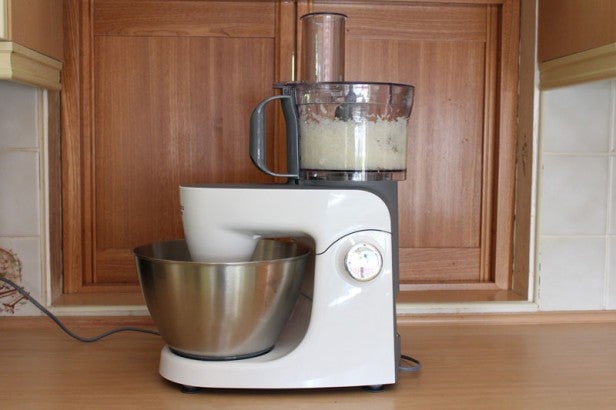 We then attached the
mincing accessory, which twists into the mixer head outlet while it’s in
the raised position. Cutting chicken into strips, we fed it into the
attachment using the pusher. The mince that emerged was of an even
consistency but taking the attachment apart revealed that some sinew had
wrapped around the internal screw. Cleaning it was awkward, especially
as this attachment has to be washed by hand. 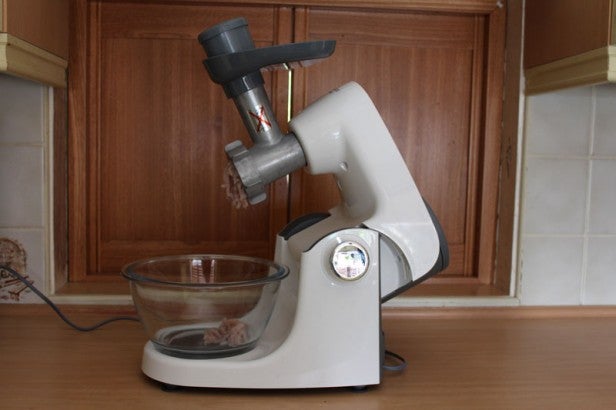 Then we used the
juice extractor to process apples. While adding them in chunks was easy,
the attachment’s position on top of the machine was problematic. While
it extracted thoroughly, the flow varied as the fruit was being juiced,
changing from drips to sudden gushes. As this was dropping from a
height, the juice tended to miss the glass below. It would be good to
see a tall jug included and/or a spout that controls the flow. Inside,
most of the pulp was dry but some unprocessed slices remained.

Next,
we moved onto the citrus press, which also attaches on top. In
contrast, this was straightforward, using a low speed to rotate a
reamer. We juiced two oranges and it produced smooth, delicious juice in
the bowl below. Swapping this for the blender jug, we made a milkshake
from strawberries, milk and ice. While the fruit was processed, chips of
ice lingered, but otherwise its consistency was beautifully frothy. 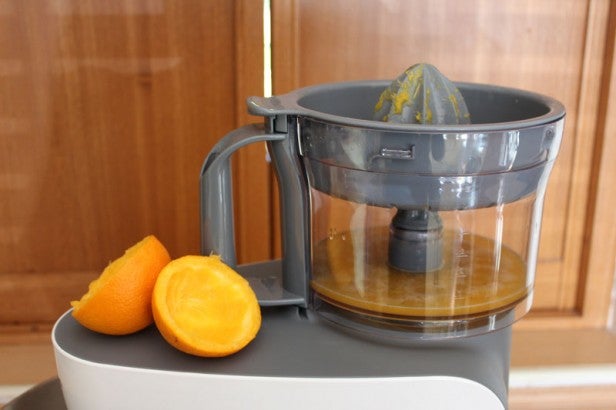 Finally,
we tested it as a stand mixer by making a chocolate cake batter with
the K beater. Here, the soft start came into its own (as well as the
splashguard), preventing flour puff as the dry ingredients combined with
eggs. The splashguard’s wide pouring spout came in especially handy as
this recipe called for liquid to be added gradually. The resulting
batter was perfectly combined and the cake noticeably light. 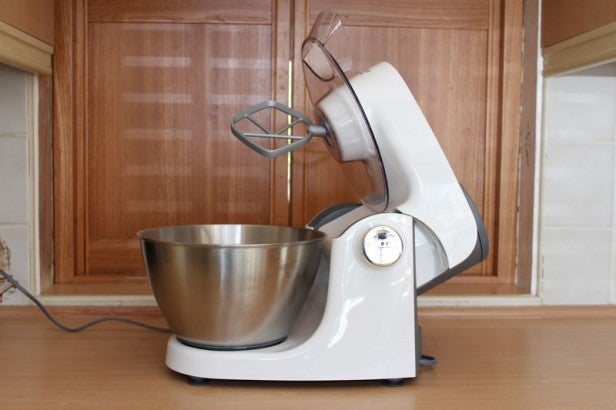 Should I buy the Kenwood MultiOne KHH330?

If
you’re in the market for a stand mixer but not sure how many weekends
you can devote to baking, the MultiOne is a great way of having mixing
capacity in your kitchen but with a whole host of other uses. It excels
at mixing, blending and processing but some of the other features aren’t
as effective as single-function appliances. Depending on how much use
you’ll get out of its extras, this could be a great value buy,
especially if you’re keen to make your own burgers or smoothies.

A
reliable all-rounder of a machine, the MultiOne might not replace every
appliance in your kitchen but it’ll definitely take the hassle out of
food prep.