The Kenwood Chefette Mary Berry Special Edition HM680CR is a hand mixer and a basic stand mixer in one. On its own, the hand mixer is on the heavy side – but it’s also sturdy and powerful. And while the price is higher than that of an average hand mixer, you're getting a stand, a stainless steel bowl, a splashguard and a spatula, in addition to the usual array of accessories.

The Kenwood Chefette Mary Berry Special Edition Hand Mixer HM680CR is part of a special-edition range of mixers, designed by Kenwood in collaboration with the food writer and former  Bake-Off host, Mary Berry.

While it’s a hand mixer by its name, it also comes with a stand and a bowl, making it a good entry-level appliance for anyone making a choice between a hand mixer or a stand mixer.

Decked in the same glossy cream with grey accents as the other mixers in the Mary Berry special-edition range, the HM680CR comes with a stand, a 3-litre stainless steel bowl, a transparent splash guard and a larger-than-average hand mixer.

While it obviously occupies more countertop space than a hand mixer, it functions as a light stand mixer, too – and takes the hassle out of finding the correct bowl. (It’s preferable to use a deep bowl with a hand mixer to avoid any spillages, but deeper bowls can be hard to come by in an average supermarket.)

When using the HM680CR as a hand mixer, it quickly becomes apparent that it’s heavier than regular models I’ve tested. At 1.04kg (with beaters attached), it’s 130g heavier than the special-edition Kenwood HM535CR and the Russell Hobbs Desire 24672 hand mixer. But it still manages to be lighter than the Swan Fearne 5-Speed hand mixer. 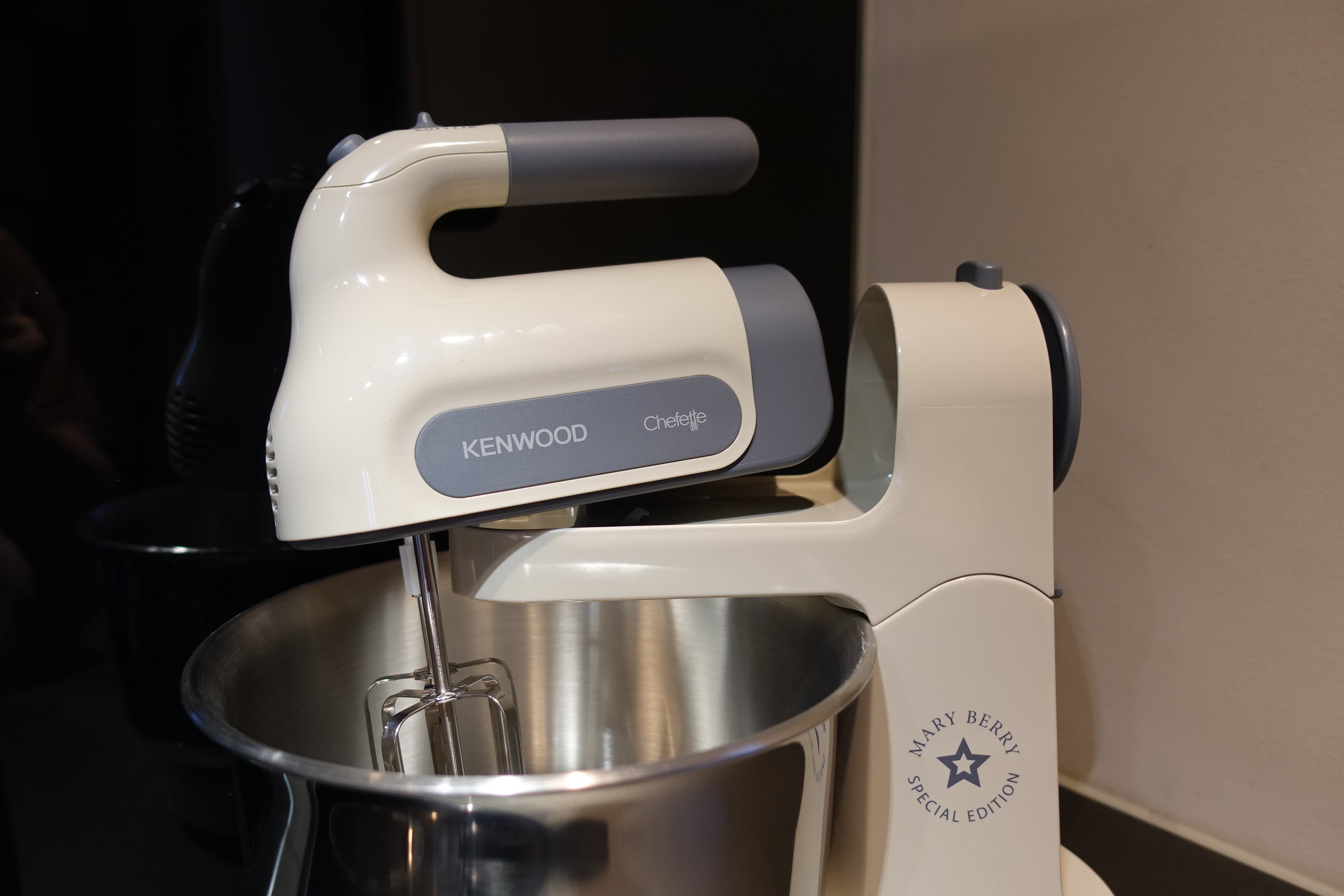 Docking and undocking the hand mixer from the stand is done at the push of a button; it can be found on top of the stand. The rear of the stand is home to a lever for raising the top part of the mixer, with or without the mixer attached, to allow for easy placement or removal of the bowl.

For those who have concerns about storage, at least the cable here can be neatly rolled up on the back of the stand while the main mixing unit is stored there. 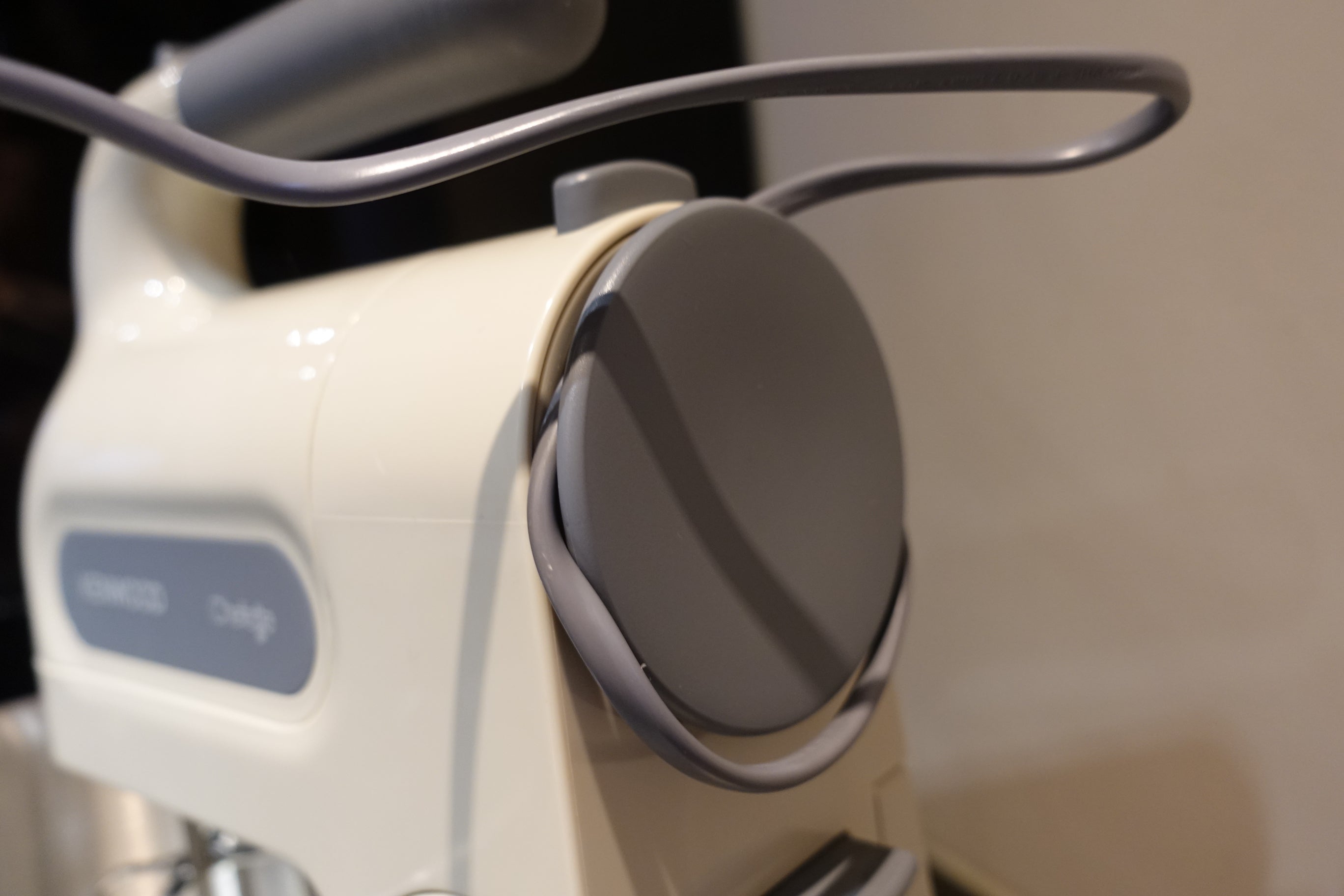 The stand itself doesn’t have a motor – but a plastic gear on the stand passively interacts with another plastic gear on one of the beaters or dough hooks  to make the mixer more stable in docked mode.

Since the HM680CR isn’t a stand mixer, the tools here don’t rotate in a planetary circuit – meaning something mimicking the manual rotation of the bowl during hand-mixing is needed. So, the bowl is designed to rotate during mixing, ensuring ingredients are combined properly. While this was the case in some instances, stickier and/or heavier mixtures required that I remove the hand mixer from its stand to get a better reach in the bowl. 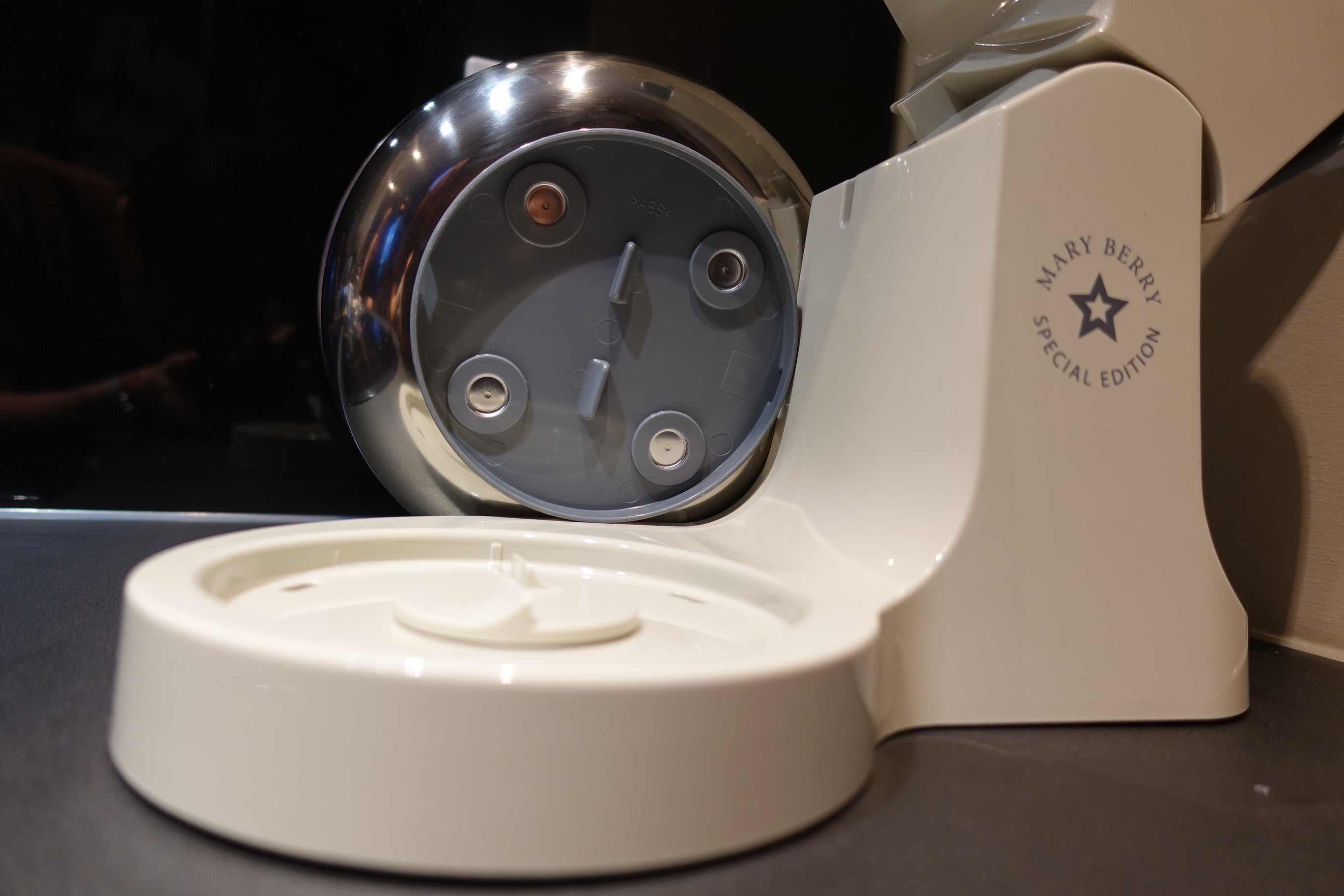 The HM680CR’s speed control switch doesn’t suffer from the same laxity as that of the HM535CR hand mixer. The mechanism on the former is precise enough not to let the switch slide down too far – meaning you won’t overshoot the mark and end up on speed 4 instead of 1.

Otherwise, the design is similar, with a grey eject button on top, and a sliding speed control switch with the pulse function on one side of the “off” switch and speeds 1 to 5 on the other. The mixer handle is rubberised, allowing for a firmer grip and helping to avoid any mishaps with greasy hands. 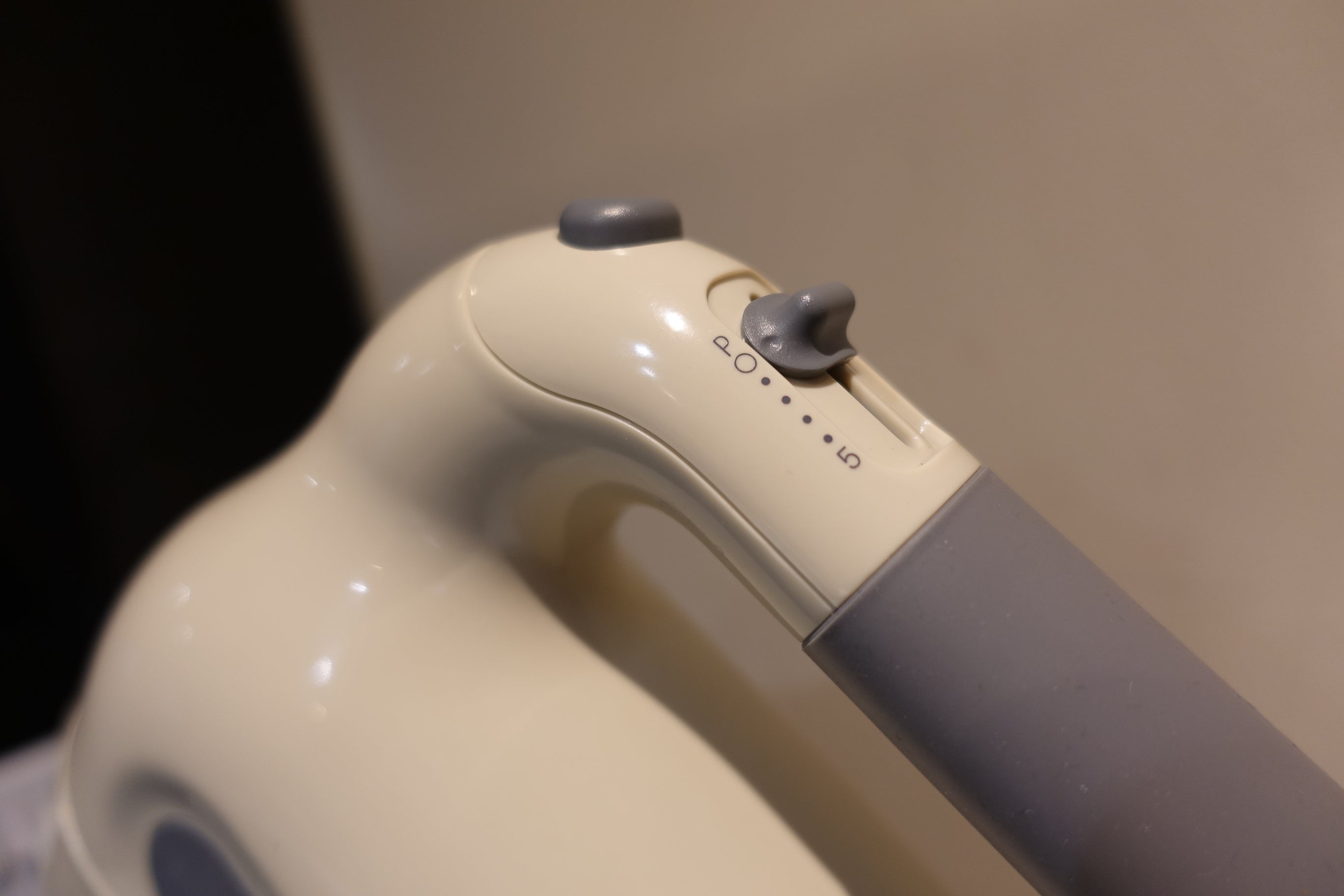 The hand mixer has its own set of speed controls

Included are two pairs of stainless steel tools – beaters and dough hooks – that are slightly bigger than average, to reflect the larger frame of the mixer. A whisk would have been welcome, but the beaters managed to fluff up egg whites without too much effort.

Disappointingly, there are no special Mary Berry recipes accompanying the HM680CR. Only four Kenwood recipes are provided within the manual: three for beaters and one for dough hooks.

First, I used the banana bread recipe from the HM680CR’s manual. The mixture was super-fluffy after just 1min 45secs, increasing the speed from 1 to 3, while keeping the mixer on the stand. 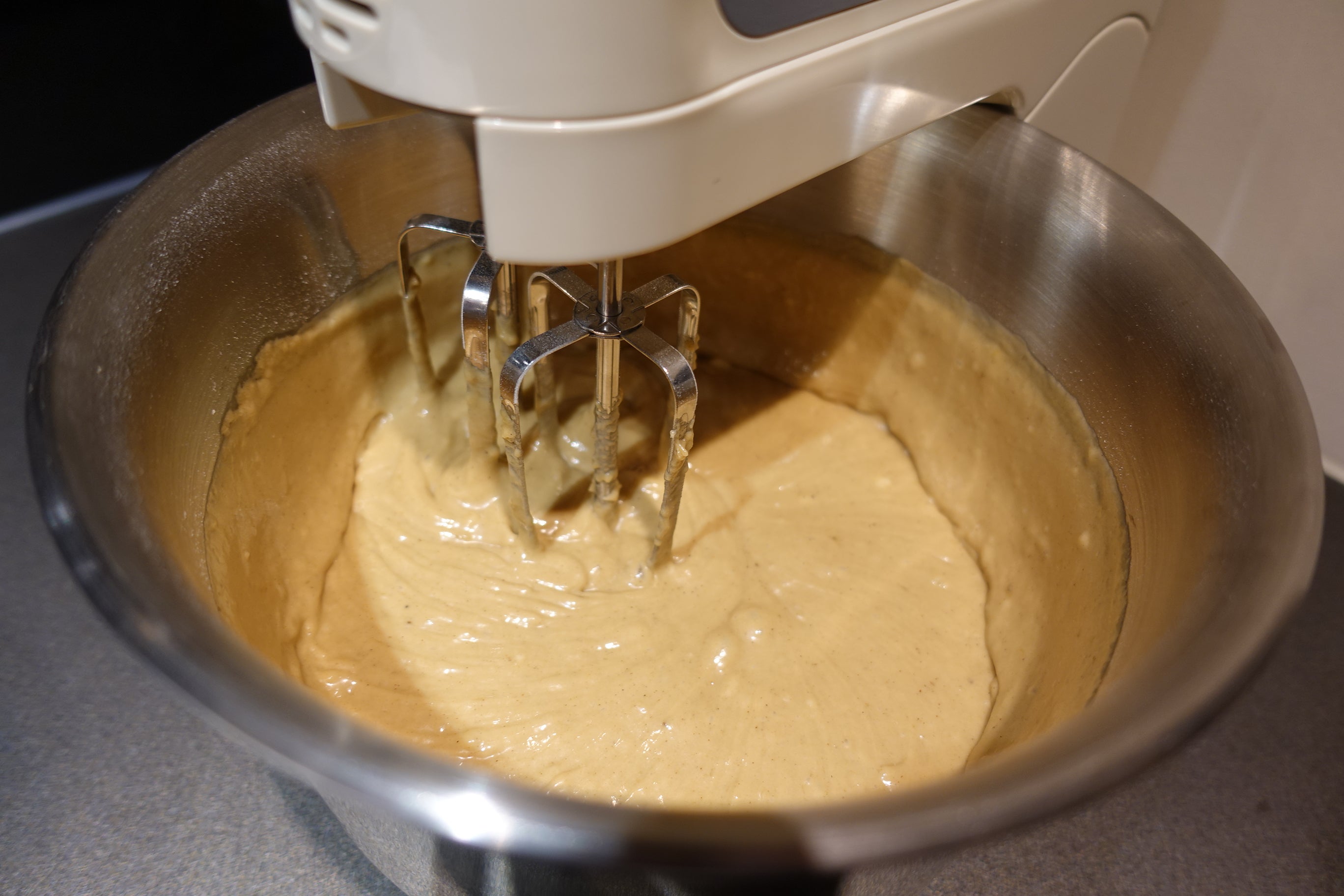 Next, I set my sights on a Sachertorte recipe by Mary Berry. On the stand, butter fluffed up nicely following 30 seconds on speed setting 1. I then gradually added sugar over 1min 45secs on the same speed as the bowl rotated. 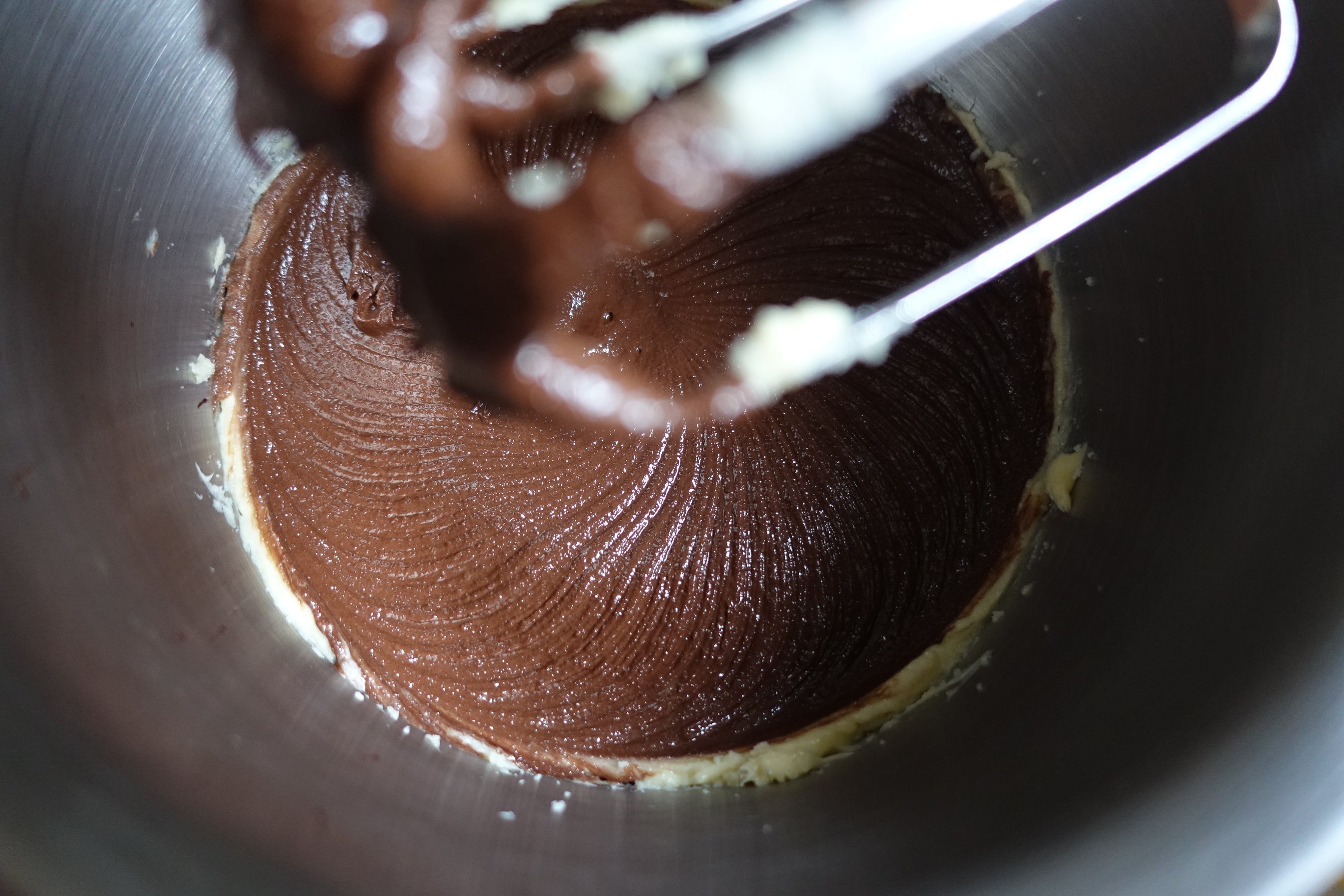 I then whisked five large egg whites separately on the stand. These started foaming almost immediately at speed 4 and formed soft peaks after 1min 15secs. In order to better gauge the texture of the egg whites, I opted to do the final bit by handholding the mixer for a further 45secs at speed 1. A total mixing time of 2 minutes is pretty fast. 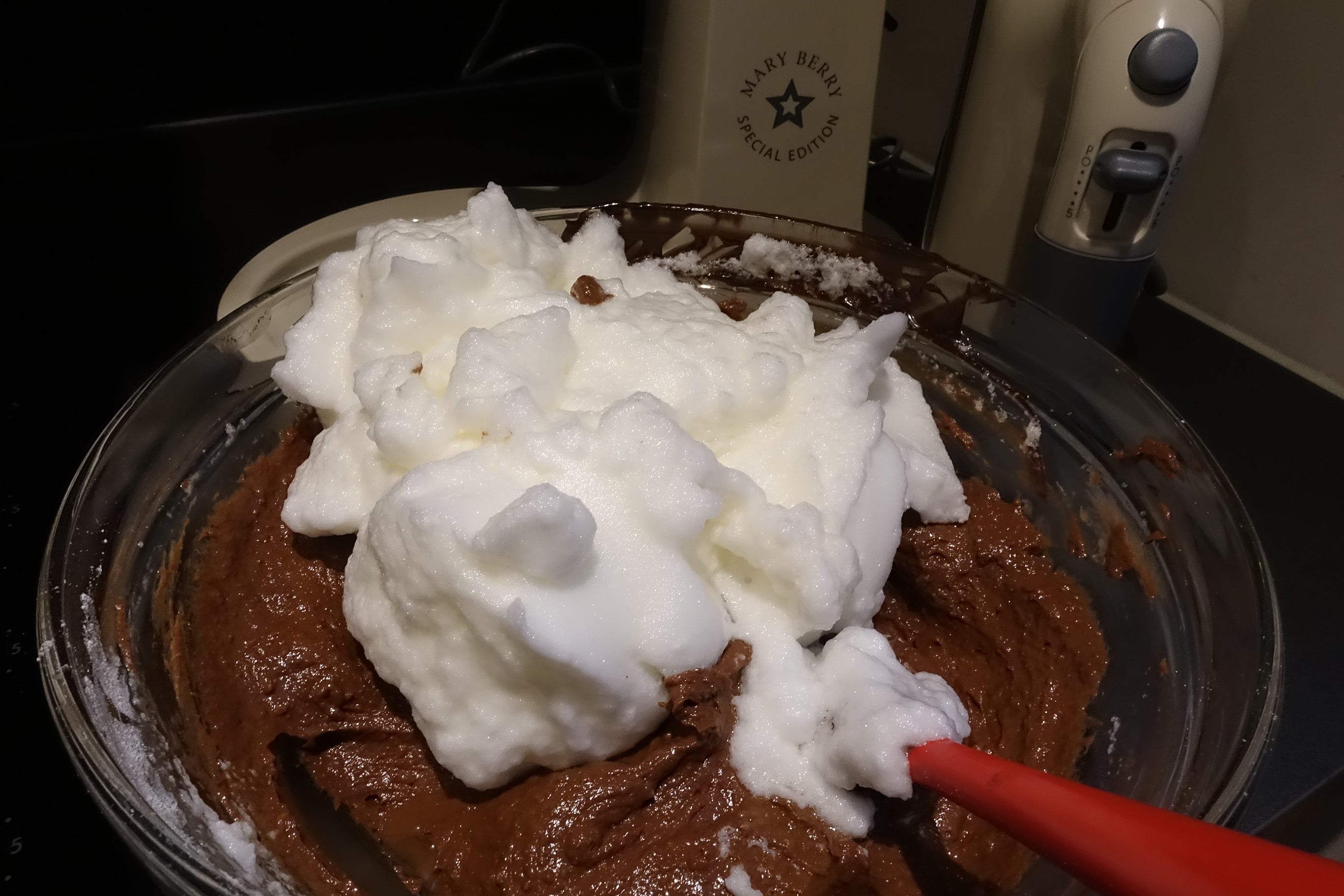 The stand proved a little less useful when kneading dough for a sweet bread. However, the HM680CR’s manual does advise to remove the mixer from the stand for heavier mixes and re-kneading.

I started off by trying to use the mixer to combine flour and chopped butter – something that’s usually advised to be done either in a food processor or by hand. While regular mixing on the stand for 2 minutes at speeds 1 and 2 did very little, I had somewhat better luck using the pulse function. 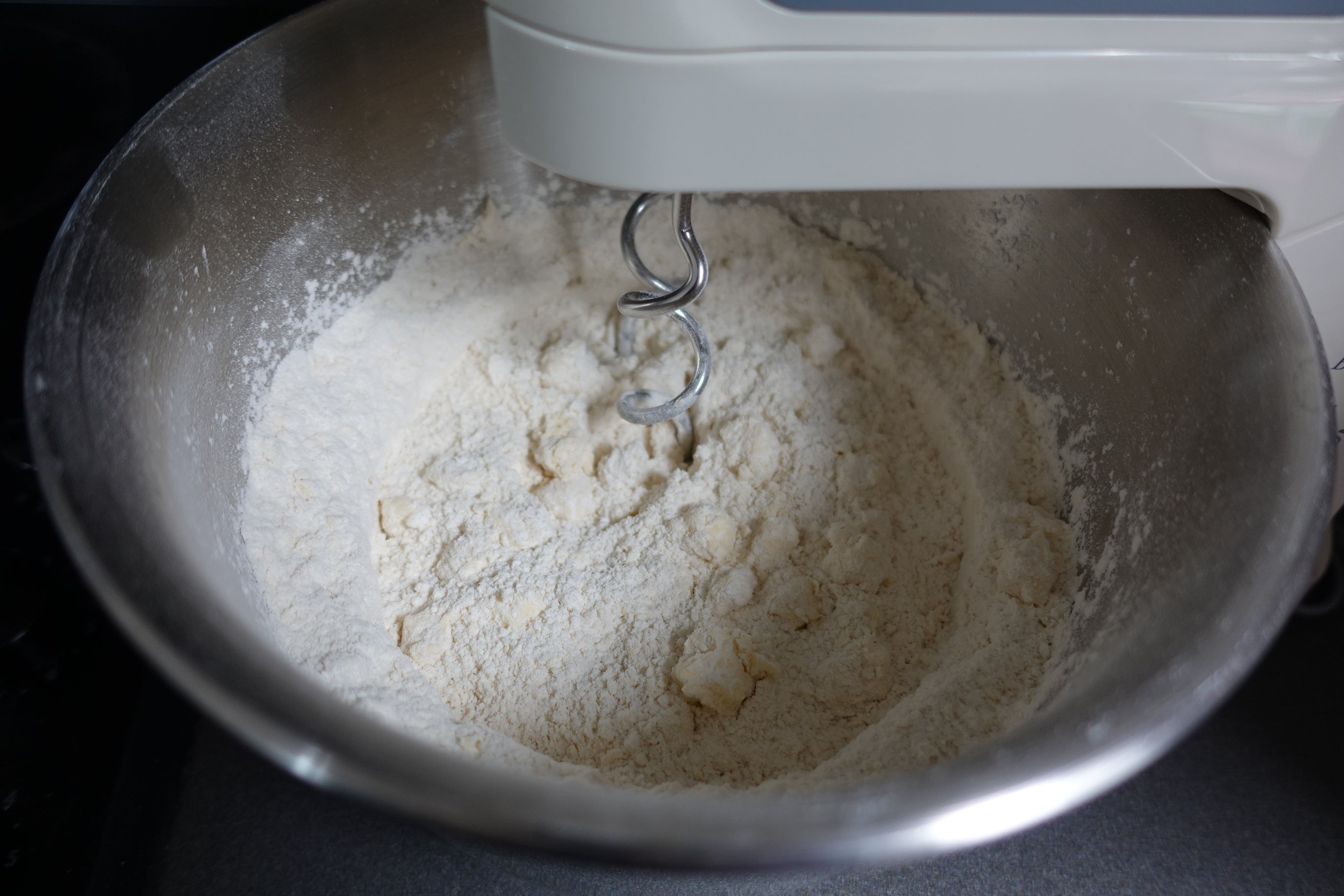 After 1min 30secs of handheld mixing with pulse, I placed the mixer back on the stand for another 2 minutes. It seemed to make little difference (and it’s easier not to have to hold the mixer).

Since the mixer was becoming a little warm, seeming to struggle with the final bits of butter, I finished off rubbing the mixture into a breadcrumb-like structure by hand. 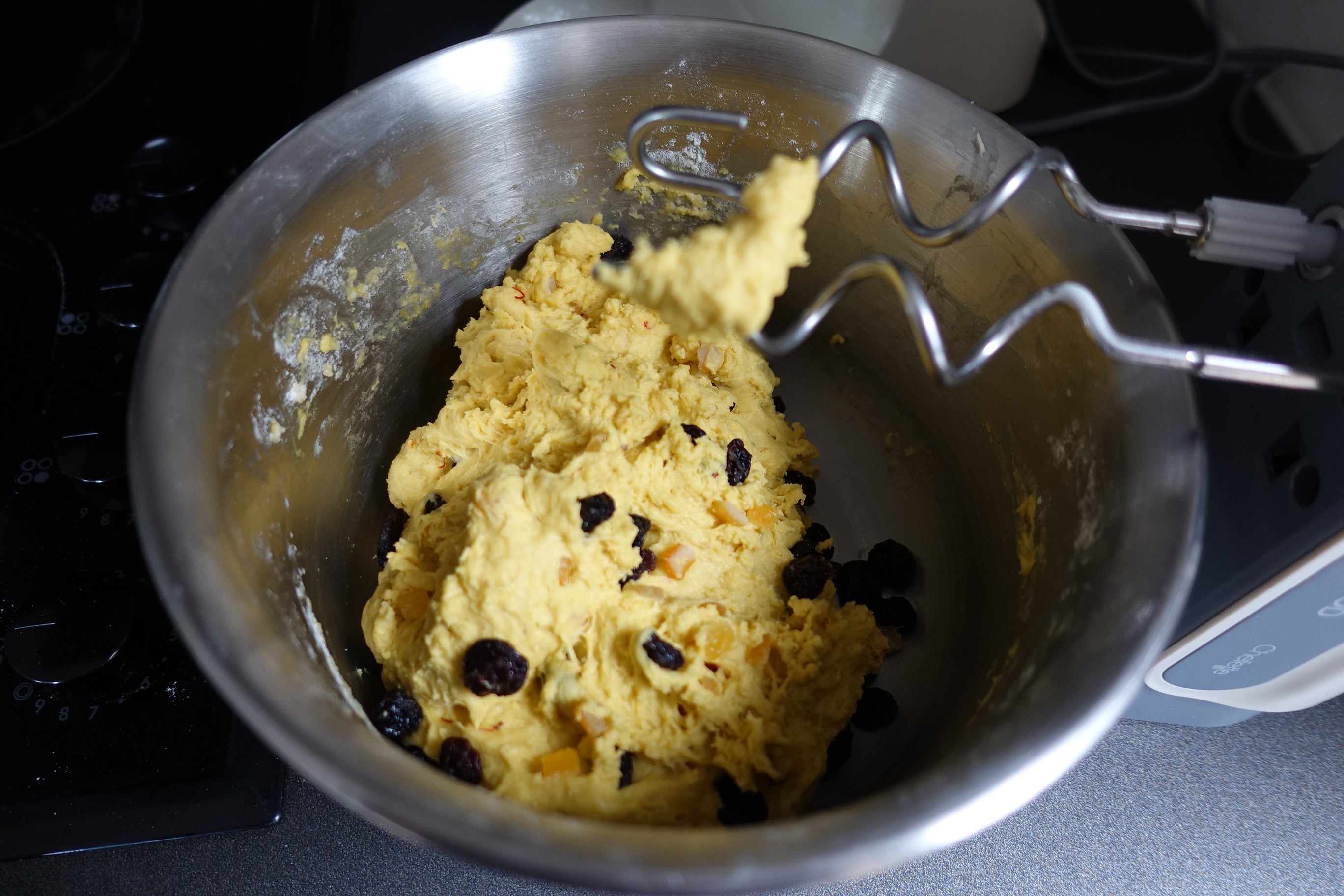 I next combined all the ingredients, stirring slightly, and set the mixer to knead on the stand. Following 20 seconds on speed 1, it became obvious the mixer was way too wobbly. So, I removed it from the stand and continued to knead for 3mins 30secs on speeds 1 and 3.

Once the dough had come together nicely, I mixed for another 1min 30secs on adding the fruit. I initially tried to blend in the fruit on the stand, but after some protesting sounds from the mixer, I went for the handheld option again. While there were a few stray raisins I had to push further into the dough by hand, I managed to get a relatively even spread overall – although due to the thickness of the dough, the raisins tended to stay slightly towards the edges rather than moving further in. Still, the bread came out with a good rise and a nice texture.

If you’re trying to decide between buying a hand mixer or a stand mixer – or you’re looking to take the first step towards owning a stand mixer without committing to a pricey machine – the HM680CR is a great entry point. While it might not be heavy-duty enough for a seasoned baker, it’s a step up from your average hand mixer, both in terms of sturdiness and price.

However, if it’s precision you’re after then the KitchenAid 9-Speed Hand Mixer with its greater range of speeds is more likely to hit the spot.