What is the Kenwood Titanium Chef KMC010?

More than a mere stand mixer, the Titanium Chef is Kenwood’s most versatile kitchen machine yet. Its electronic controls maintain speed and power regardless of load, allowing you to prep with precision, while its standard kit can cream, beat, whisk, mix, knead and liquidise.

Three outlets mean it can also be twinned with more than 20 optional attachments to mill, grind, mince, squeeze, slice, grate and chop – effectively replacing most of the appliances in your kitchen. While some stand mixers linger around the 500-800W mark for power, the Chef Titanium packs in 1,400W. As a result, there’s isn’t a task it can’t take on – from whisking up to 12 egg whites, 2.7kg of cake batter and 2.2kg of dough to a whole dinner menu.

Made from silver die-cast aluminium with a stainless-steel bowl with handles, the Titanium chef combines professional good-looks with a sturdy, solid build.

There’s no fuss or frippery, just a dial to control the speed (min, six numbered speeds, max and pulse) and a flick switch to lift the mixer’s head. Its bowl sits snugly on a non-slip mat, while a clear splashguard protects the worktop from any flying ingredients.

It comes with a good choice of tools, too: a K-beater, whisk and dough hook – all in stainless steel – plus a creaming beater with a flexible wiper for soft mixtures. 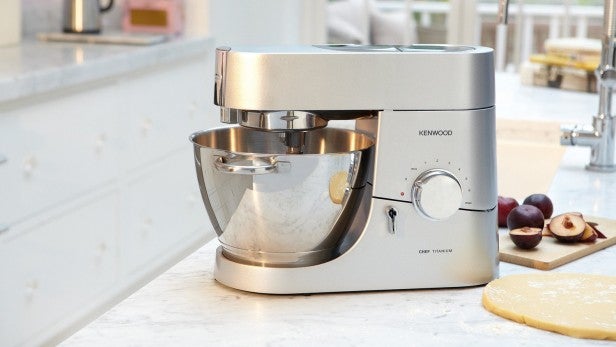 What sets the Titanium Chef apart from basic stand mixers is its outlets. A slow-speed outlet at the front provides power for anything from a pasta roller to a fruit press; a medium speed one above it can power a food processor; and a high-speed outlet runs the included blender.

The blender jug is equally well designed. It’s made from thermo-resistant glass, so it can handle hot ingredients, plus detachable blades ensure it can be cleaned thoroughly.

Kenwood Titanium Chef KMC010 – What is it like to use?

Each tool on the Titanium Chef fits with a push and twist, which makes swapping them over simple. A switch on the front unlocks the mixer head so it can easily be tipped back, but unlocking it once raised is a little trickier. We found that it sometimes became stuck.

We started with a recipe for Morning Coffee Cake from the enclosed recipe book, which put the creaming beater to the test. First, we mixed sugar and melted butter using speed 2 – here, the splashguard came in handy as the mixture was runny. At the same speed we added eggs and yogurt, before switching to minimum to add the flour and other dry ingredients.

The Titanium Chef uses Kenwood’s Total Mixing action – a planetary motion that combines the beater revolving in one direction, while the socket turns in the other, making sure all the mixture is picked up.

The finished batter was consistently mixed with a small amount of flour left on the beater. Once baked, the cake rose well, although not as much as an average sponge.

Next, we made rock cakes using oats, apples, honey and oil. Adding all the ingredients to the mixer, we used the K-beater to gently combine the mixture on minimum speed. It accomplished this very quickly, producing a loose mixture that could be spooned out to be baked.

Moving on to a recipe for pizza, we fitted the dough hook and placed the dry ingredients in the bowl. Raising the hinged section of the splashguard, we were able to pour in water and oil at a slow rate while the machine ran at minimum speed.

Once combined, we raised the speed to knead the dough. Since it was quite sticky, the dough tended to cling to the hook. Adding extra flour helped free the dough for kneading, but it still had a tendency to wrap around the hook. However, the dough was stretchy enough to form a base and proved especially well.

Next, we tried making soup in the blender from raw vegetables, cooked potato and hot stock. Attaching the jug to the fast outlet, we blended for three minutes. The finished soup wasn’t entirely smooth since small pieces of vegetable were visible, and it was tepid, having cooled while being processed. While it lacked the power to completely liquidise the contents, it demonstrated that it could blend cooked soups and liquids.

Finally, we whipped three egg whites using the whisk on speed 5. The Titanium Chef was noisy at this speed, but didn’t shift at all on the worktop. Within a few minutes, the whites formed soft peaks and were firm enough to stay in the bowl when inverted. Clean-up was straightforward – everything is dishwasher-safe, apart from the splashguard. 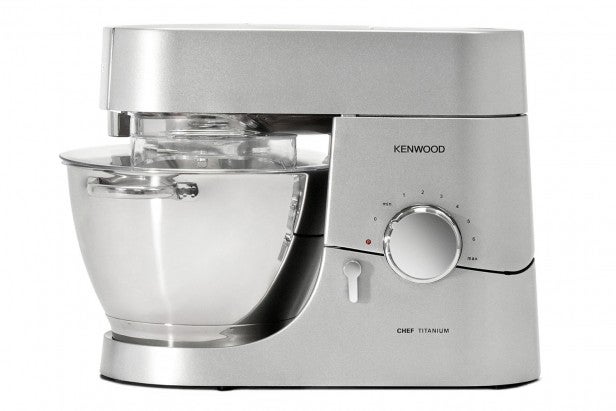 Should I buy the Kenwood Titanium Chef KMC010?

There are several features that make the Titanium Chef a good buy for cooks of all abilities. Simple controls, a forgiving motor with enough power to work its way through almost anything without struggling, and kit that can be placed in the dishwasher without a second thought, are all big pluses.

That said, it’s an investment buy and its optional accessories will push up the price further, so consider if you’ll use all its features to make it a worthwhile purchase.

More a workhorse than a display piece, it’s a good all-rounder that handles the majority of tasks well.