What is the KEF Muo?

The KEF Muo is a high-end Bluetooth speaker of tiny proportions. It’s dinky enough to slip into a handbag, or a small pocket inside a rucksack. But at £299, the price is anything but small.

For those raising an eyebrow, I’m not surprised – for this money you could easily get your hands on a seriously good wireless home-bound speaker.

But I’m not turned off, because in many respects the KEF Muo totally flattens the sound quality on offer from usual recommendations such as the Bose SoundLink Mini II. The speaker drivers used here are a cut above. However, for those considering such an outlay for a portable speaker, take note of the sound quality section of this review carefully – this speaker may not be for everyone. 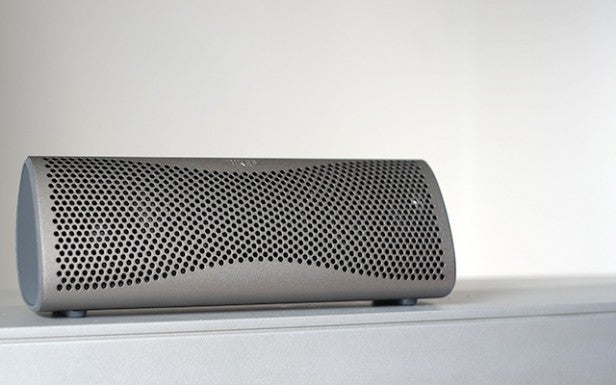 Surely splashing out £300 for a speaker that’s only big enough serve as a soundbar for an iPad is absurdity? This isn’t an unreasonable preconception to have of the KEF Muo at first sight.

However, I don’t think pictures really do justice to how well made the Muo is. The body is formed of a single piece of metal; only the end caps are separate parts. The Muo is largely made of aluminium, with lightly rubberised plastic on the ends. It’s far classier than the Beats Pill or the Bose SoundLink Mini II. It’s a little larger too. 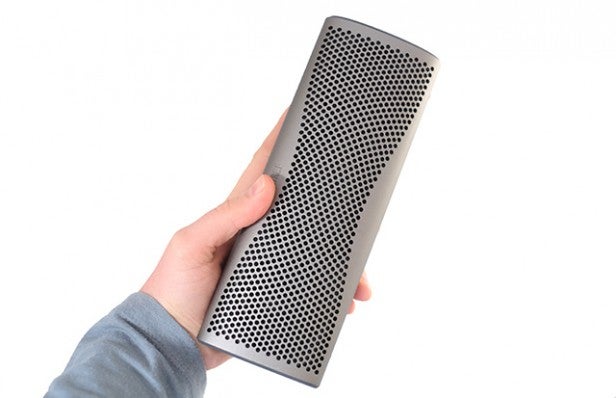 KEF’s Muo has been designed by the same people behind some of the company’s top-end speakers. And I get the impression that this is the smallest size it was possible for designer Ross Lovegrove opt for. The Muo is home to the same-sized drivers as the significantly larger B&W T7 – which are 50mm a piece.

And it is these drivers that are the most interesting feature in the KEF Muo. The UniQ drivers are of the same family as you’ll find in the company’s bookshelf and larger model of speakers.

Their design is similar, not the same.The drivers here pack mid and treble driver sections into the same unit – which is clever. Hi-fi enthusiasts reading this may have come across a similar idea in dual-concentric drivers. 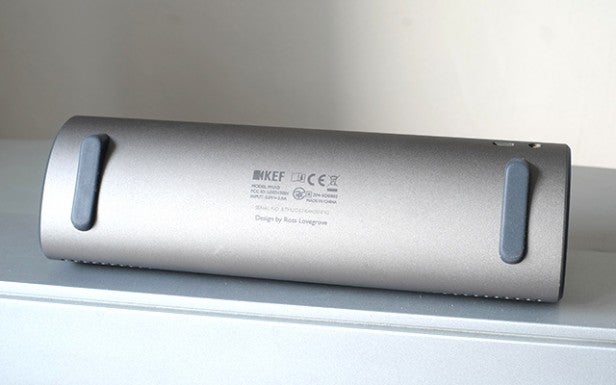 There are rubbery pads on the underside

While these aren’t common, many have been made over past few decades. It’s this smart driver design that gives the Muo a real chance of justifying its price.

Elsewhere, the speaker features most of the extras you’d expect. There’s NFC and aptX, and an aux input to let you plug in non-wireless sources. You can pair two of them for stereo sound, although I’ve not been able to try this out. The KEF Muo isn’t waterproof, however.

The Muo’s battery is rated to last up to 12 hours. Expect around half that if you’re going to play at max volume, though. 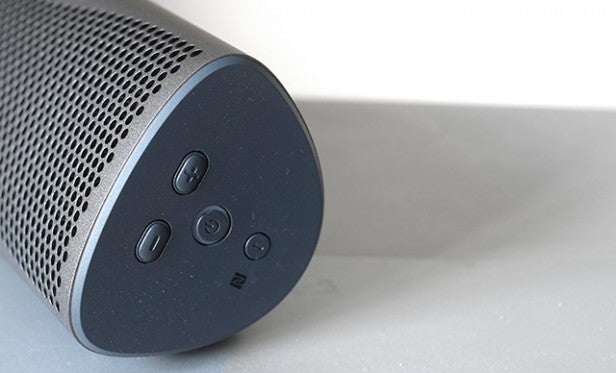 This tiny speaker absolutely isn’t a “me too” Bluetooth speaker. With hundreds of companies cranking out portable speakers these days, the Muo sticks to catering for the KEF audience, rather than someone browsing HMV for something to hook up to their iPhone.

You can hear this in the sound the Muo delivers. For mid-range and treble detail and fidelity, the Muo outstrips everything we’ve heard at this size. What is manages to achieve with only two 50mm drivers and a passive radiator is impressive. 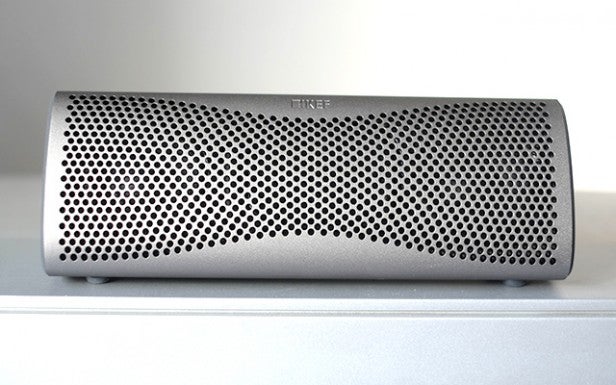 The KEF Muo is capable of playing at loud volumes too, making the Bose SoundLink Mini II seem quite tame in comparison. It isn’t only the detail that’s notable, but how pronounced the Muo’s mids are. It projects vocals powerfully, with great dynamics for such a small unit.

Most recently I heard the Beats Pill try for a similarly bold style of presentation, but where that speaker ends up sounding a little crude and “basic” when pushed, the Muo can crank up the volume to uncomfortable levels without sounding like its drivers are trying to pop out of its frame.

Looking and listening a little closer, the sort of tricks KEF has needed to use to pull this off become clear. Where most small speakers split the frequency duties between a pair of small drivers as one team and the radiator as another, the Muo breaks things down further. One 50mm driver is used for higher-end frequencies, the other for slightly lower ones. It seems likely this “lower frequency” UniQ driver is what feeds into the bass radiator. 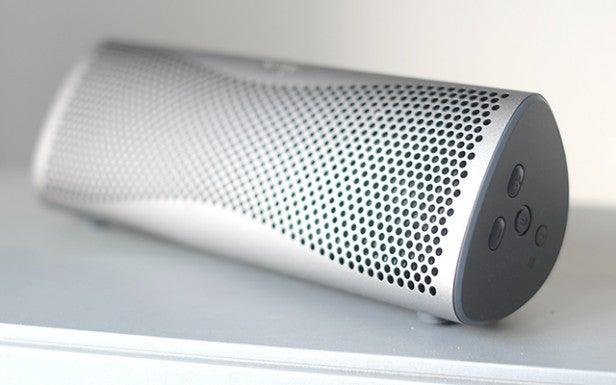 While the speaker is able to reach a reasonable bass floor for such a small speaker, I found that the sound was perhaps a little too much by the UniQ units.

The KEF Muo sound is a lot less thick, and in some respects less cohesive, than the best cheaper portable speakers. Low and mid-bass is quite spartan compared with favourites such as the Bose SoundLink Mini II and Jam Heavy Metal.

While this doesn’t stop the Muo from giving that “high-end” impression, it does make for a slightly less relaxing sound. In radically upscaling its ambitions in some areas, it has had to hold back in others.

So while in some respects I’m far more impressed by the Muo over its rivals, there’s a sense that it’s “missing” a few elements. And it appears that while some lower-end speakers do their best to mimic the tonal balance of much larger speaker systems, the KEF Muo is more about demonstrating what the companies 50mm UniQ drivers can do.

You get great mid and treble quality, but the KEF Muo doesn’t sound as “full” playing certain content. As a result, the Bose SoundLink Mini II may be of greater appeal to some. And if you can stomach a larger box, the Bowers & Wilkins T7 is another strong alternative.

However, if you want a hint of high-fidelity sound in a speaker that you can hold in your hand, you need to give the Muo a listen. 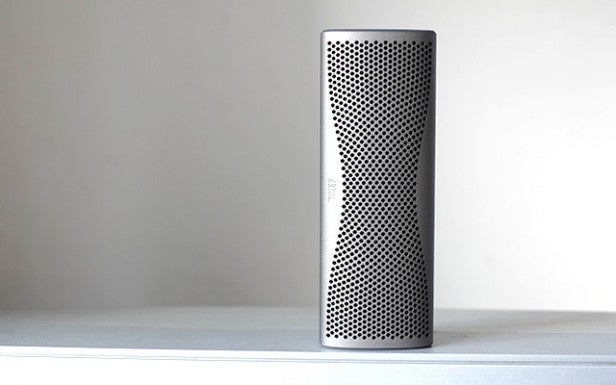 Should I buy the KEF Muo?

The KEF Muo sets a new standard for the quality of sound you can expect from such a small speaker.

It may be expensive, but this is a good portable speaker for those who truly appreciate the texture and detail of music, but have been underwhelmed by the small speakers currently on the market.

For more casual listening, though, the KEF Muo sound isn’t quite as “full” in all areas of the frequency range as some lower-grade wireless units. While not harsh or hard, those who like speakers to sound bassy or “warm” may be better off opting for something a little cheaper – or going for a bigger box.

If you’re fed up with the limited definition offered by the majority of small speakers, then the KEF Muo will truly impress.