As clever as they are, we can understand why some home cinema purists see soundbars as a bit of a gamble. Packing decoders, processors, amplifiers and speakers into such a compact cabinet must inevitably take its toll on performance, and as a result they’re never likely to match the sound quality you get from a set of separate 5.1-channel speakers.

However, there is one type of soundbar, typically produced by dedicated speaker manufacturers, that’s more likely to impress those with discerning sonic tastes. These ‘passive’ soundbars integrate the front and centre speakers into a single unit but leave all the processing, decoding and amplification to your AV receiver – that way you get the wall-mountability of a soundbar, but with the same sound quality as a traditional amp/speakers combo. The KHT8005 from KEF is one such soundbar, and is looking to replicate the success of Monitor Audio’s Radius HD system, which works on a similar principle.


Of course, without any signal processing on board, KEF’s soundbar doesn’t try and replicate a 5.1-channel effect using virtual surround technology like many soundbars. Instead, it comes with a pair of physical rear speakers (HTS7001) which guarantees a more convincing surround effect than virtual technology, but having to accommodate them and run cables to the back of the room does defeat the object somewhat. 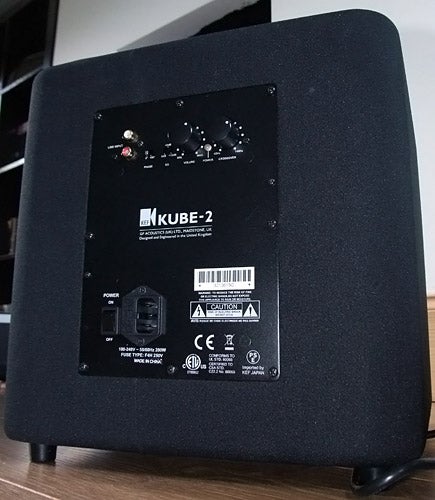 Joining the KHT8003 soundbar and HTS7001 rears is the Kube-2 subwoofer, last seen in the line-up of the excellent KHT2005.3 system – a good omen indeed. This powered bass box packs a 200W amplifier and covers a frequency range of 35-150Hz, giving movie soundtracks the extra deep bass punch that the soundbar can’t provide on its own.


As we discovered from our first meeting, the Kube-2 is highly attractive thanks to its gorgeous gloss-black top panel and all-round curviness. It also sports volume and crossover dials on the back and switches to invert the phase and turn on the ‘EQ’ bass boost feature. On the inside it packs a side-firing 250mm long-throw bass driver with a 250mm auxiliary bass radiator for good measure.


As for the KHT8003, its true beauty can only be appreciated when you get up close – from afar it just looks like a common or garden black bar, which means it’ll nicely blend in with most TVs (it’s designed for sets measuring 42in and over). But get your mitts on it and you can feel the solid build quality and elegant gloss black finish, plus its oval profile gives it an elegance missing from many soundbars.

The only wires you need to connect to the KHT8003 are speaker cables for the left, right and centre speakers, which explains why the rear panel is so sparse. There are simply three sets of gold-plated binding posts, which helpfully contain little springs that hold the cables firmly in place instead of the usual screw-type connections. 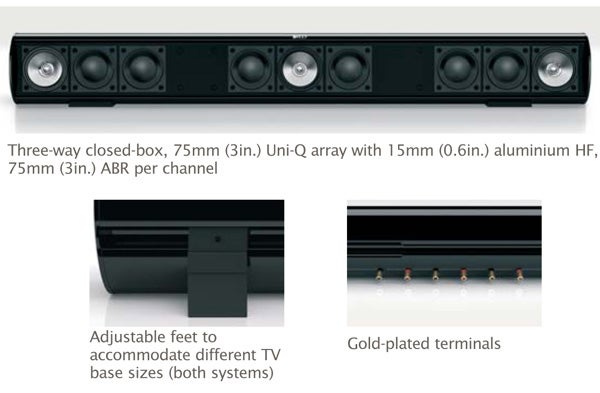 The lack of sockets actually makes it easier to wall-mount than most soundbars – after all, three speaker cables are much easier to conceal than a rats nest of HDMIs and audio leads. All the relevant brackets are supplied for wall-mounting the soundbar and the rear speakers, but if you don’t fancy that then there’s a pair of tabletop cradles for the soundbar to sit in, while the beautifully-styled rears will stand up on their own or fit into KEF’s speaker stands.


Inside the soundbar’s ‘acoustically inert’ aluminium enclosure is a showcase of KEF’s tried and trusted technology. There are three complete speakers, each one comprising KEF’s Uni-Q array with a 75mm mid-bass driver, a 15in aluminium high-frequency driver, a 75mm woofer and a 75mm auxiliary bass radiator. The rear speakers, meanwhile, feature dual 50mm woofers and 19mm HF drivers and have the same sprung binding posts on the back as the soundbar. 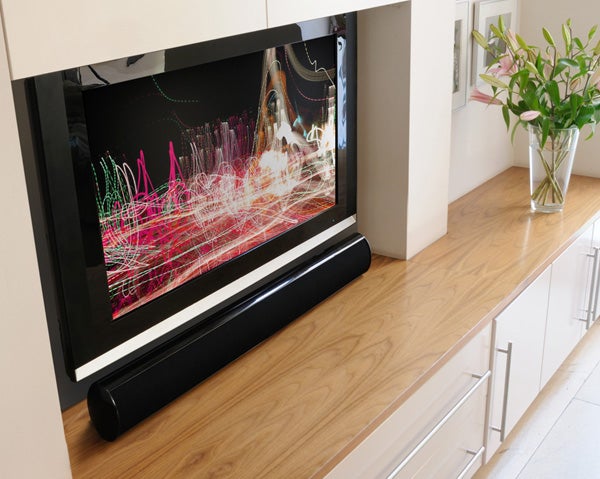 The amount of time it takes to rig up the system depends on which components you want to wall mount, and on a general note it’s worth reiterating that if you don’t already own an AV receiver then you’ll need to get yourself one, a requirement that could turn the KEF into an even more expensive option than it is already – not to mention the fact that it strips away much of the hassle-free convenience that you get from soundbars with everything built-in.


Still, once you’ve rigged it up, configuring the system is a quick process – KEF recommends setting your receiver’s speaker settings to ‘small’ and although it takes some judicious tweaking of the sub volume to get it working in harmony with the other speakers, it’s easy to do.

Once configuration is complete you’re in for a treat. We selected ”The Dark Knight’s” electrifying opening bank robbery scene for testing and were spellbound by what this system does with it. The pin-sharp tinkle of glass as the thieves break the window in the opening shot gives you a good idea about the soundbar’s refined high-frequency handling, while gunshots later in the scene are so terse and aggressive they feel like they’re ripping right through you.


There’s a clarity and directness to the midrange and high-frequencies that makes for an invigorating listen (the school bus crashing through the wall is a highlight) and you won’t strain to hear any of the dialogue – voices always cut through the din, even Batman’s gruff, menacing tones.The rears also do their job well, chucking sharp, detailed effects and subtle ambience into an open and atmospheric soundstage. 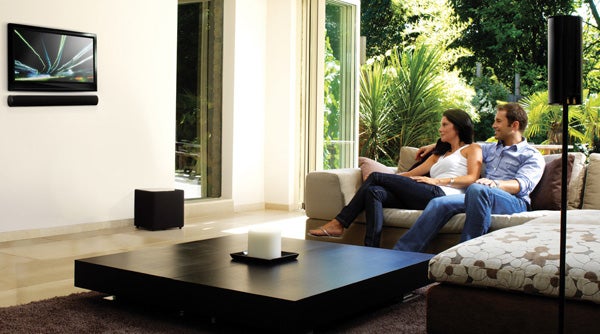 As for bass performance the Kube-2 is the business. Skip to the scene in which The Joker blows up Gotham City hospital and it bolsters the explosions with sustained bursts of luxuriously deep and powerful bass, which fuses beautifully with the soundbar and sats. But short, sharp low-frequency effects make an equally memorable impression thanks to the sub’s tautness and agility.


Swapping over to our trusty ”Kind of Blue” CD, the KEF really shines with music. The sound is cohesive, detailed and involving, with Bill Evans’ sprightly piano work dancing over the delicate drumming and solid bass, all topped off by pure, well-controlled blasts from Miles’ trumpet. Nice.


So where does the KHT8005 stand in the soundbar pecking order? Well, it can’t quite match the sublime performance and all-round exuberance of the Bowers & Wilkins Panorama – still our favourite soundbar despite its purse-draining price tag – but the sound quality is a touch more powerful and vibrant than both the Teufel Cinebar 50 and Monitor Audio’s Radius HD, while it walks all over cheapie models from the likes of Samsung, Crystal Audio and Sharp.


Yes, the KEF has a bit of an unfair advantage over most of those models due to the inclusion of real rear speakers, but the results are worth the added inconvenience of installing them. So if you already own an AV receiver then the KHT8005 is a fantastic option, but those starting from scratch might be better off going for the ‘all-in-one’ convenience and extra features offered by the Teufel or Samsung HT-BD8200.