It’s a compact 5.1 speaker system featuring five identical egg-shaped satellites, each one crammed with innovative KEF technology – most notably a new Uni-Q driver array. The system is completed by a similarly curvy active subwoofer designed to integrate seamlessly with the satellites.

E305 is a revamped version of KEF’s original KHT2005 and KHT3005SE egg systems, and is yours for a not unreasonable £900, putting it in the same price ball park as the Quad L-ite Plus, Wharfedale Diamond 100-HCP, Roth OLi RA and DALI Fazon Mikro. 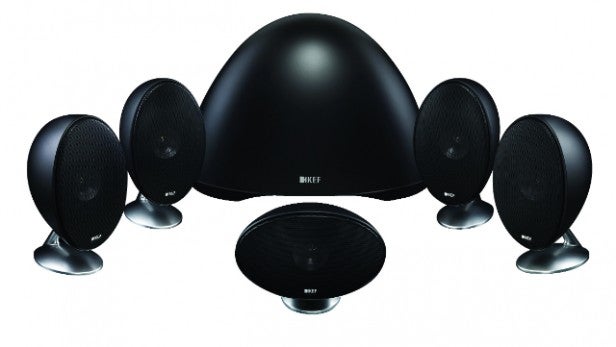 It would take a heart of stone not to succumb to the E305’s curvy charms. For us, it was love at first sight.

The E301 satellites are stunning, with a rounded back end and chrome cast aluminium base that pivots on a ball joint, allowing you to turn it to the ideal listening angle. They’re available in Deep Black and Pure White – KEF sent us the latter.

Build quality is of the highest order too. They’re satisfyingly robust, weighing 2.4kg each, while the smooth matt finish feels luxurious. Inside they’re reinforced with ribbing and damping technologies to keep cabinet colouration and unwanted resonance at bay.

The front mesh is fashioned from aluminium, and with a little coaxing you can pull it off to reveal KEF’s innovative driver arrangement.

The E-301c centre speaker has the same spec as the others but it’s aligned horizontally for easy placement under a TV. It sports the same pivot stand so you can aim it upwards.

The E-2 subwoofer sees the biggest design change from the KHT3005SE. The ring doughnut enclosure of the previous sub is replaced by a curvy dome with a downward firing driver. It’s utterly stylish and pleasingly compact at just 320mm high by 270mm deep – we had no trouble finding room for it. 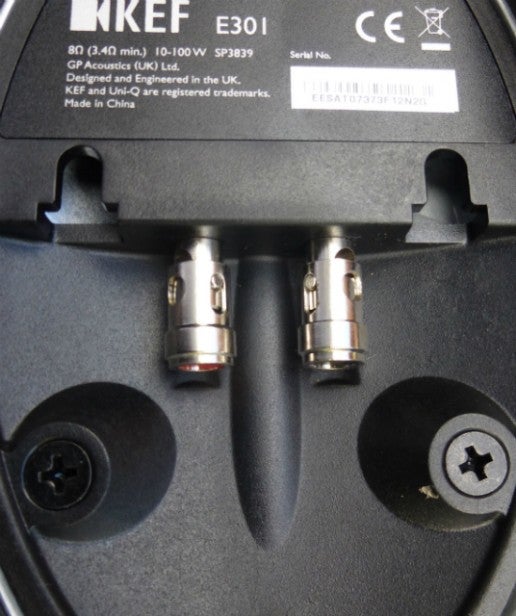 For a tidy, clutter-free look, KEF has placed the speaker terminals on the bottom of the stand rather than the back of the speaker – the cables poke out from a groove at the back. The terminals are metal push clips that hold the wires securely, although the holes are fairly small and not ideal for thick cables.

If you want to wall mount the satellites, the stand rotates and bends back to form a bracket, allowing you to hang it on screws. It saves a lot of faffing about.

The subwoofer’s line input and controls are tucked away on the bottom of the cabinet. This would normally be a pain but the lack of volume controls means you won’t need to do much tweaking on the sub itself – everything can be controlled via your AV receiver. 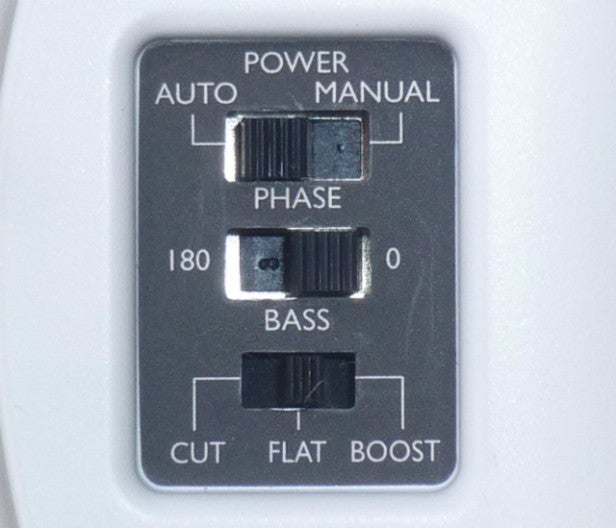 There are three switches: auto/manual power, phase control (0º/180º) and Bass Boost. The latter’s three settings let you tailor the sound to your room conditions and taste – Cut (-4dB), Flat (0dB) and Boost ( 2dB).

We had a play around and found Flat offers the most satisfying integration. KEF recommends setting the low pass filter on your AVR to 120Hz, while the satellites’ crossover should be set to 90Hz. 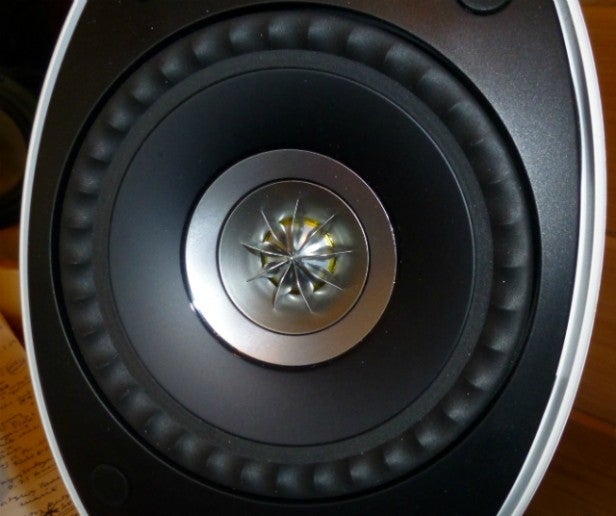 The two-way satellites’ key feature is a new 4.25in Uni-Q driver array.

For
those unfamiliar with Uni-Q, this KEF innovation sees the tweeter
mounted inside the mid/bass cone so that midrange and treble sounds come
at you from the same point in space.

According to KEF, this results in a natural sound with more convincing integration than separately mounted drivers.

Here,
a 0.75in aluminium dome tweeter sits in the middle of the 4.25in
mid/bass cone. The tweeter is vented to prevent detrimental pressure
building up behind the dome, while a tangerine waveguide helps high
frequencies radiate evenly.

The mid/bass cone, meanwhile, is
fashioned from stiffened aluminium and sits within KEF’s Z-flex
surround, while the closed-box subwoofer packs a long-throw 8in cone and
250W Class-D amplifier.

The E305
delivers an immersive soundstage with movies thanks to the seamless
integration between the speakers. The tonally identical satellites allow
effects to pass naturally and fluidly between channels, and when you
combine this with the remarkably wide dispersion of the Uni-Q driver
array, it creates the illusion of being engulfed by a 360º soundstage.

This
pays dividends during The Desolation of Smaug’s face-off between Bilbo
and the dragon. As the beast darts and swoops around the cavern, the
whooshing noises glide smoothly and convincingly across the front and
between the rears, while waves of crackling fire flood into the room.
The sense of envelopment is heightened further by the clear reproduction
of subtle echoes that reverberate from the rear speakers and down the
sides of the room. 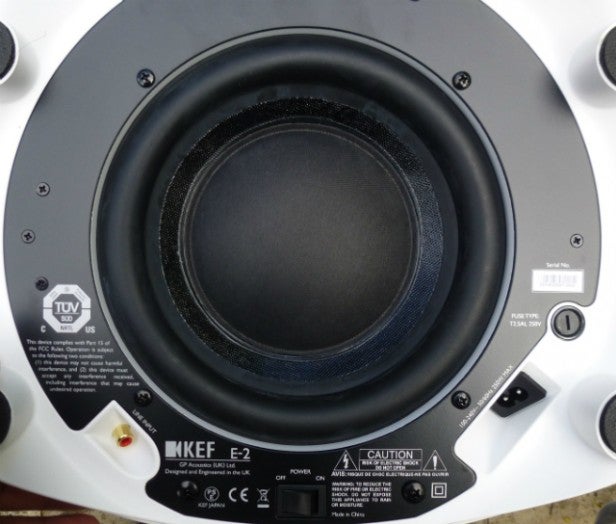 This
delightful integration extends to the subwoofer, which blends in so
flawlessly with the satellites that for the most part you don’t realise
it’s there. That means you get a solid, singular soundstage with all the
channels working together cohesively, as opposed to the satellites
competing against disjointed boomy bass. It’s easy to lose yourself in a
sound like this.

The subwoofer also packs a punch when Smaug
starts stomping around, lending a sense of heft to its footsteps, and
makes his voice sound deep. It also has the agility to keep pace with
the score’s rhythmic drums without overhang – a quality that also makes
it superb for music playback.

The satellites render high
frequencies with sparkling clarity. From the buzzing bees and squeaking
mice in Beorn’s house to the eerie, swirling ambience of Dol Guldur,
every scene is laden with detail. It’s particularly impressive when the
Mirkwood spiders wrap up the dwarves in silk – the arachnids’ chattering
and the gently creaking webs are crystal clear, sucking you right into
this creepy scene.

What’s more, dialogue emerges from the middle of the screen and is laced with nuance thanks to those sensitive Uni-Q tweeters.

Criticisms
are few and far between, but we did find that overall the speakers lack
bite and dynamism compared with systems like the Quad L-ite Plus and
Wharfedale Diamond 100-HCP. They’re only provoked into proper
pulse-racing excitement at high volumes, which you (or your neighbours)
might not always be in the mood for. At lower listening levels it lacks
impact.

And when we cranked our Onkyo TX-NR818
up to 75dB – which causes many speaker systems to rip the roof off – it
still felt as though he E305 was holding back. To its credit though,
the KEF handles such volumes without any distortion whatsoever and its
gorgeous detail and immersive soundstage make up for any shortcomings.

Sonically,
its key talent is its ability to create a seamless, immersive
soundstage, in which the speakers meld into each other naturally and
integrate invisibly with the superb subwoofer. It also reproduces detail
with sparkling clarity and has a relaxed tone that works well with both
music and movies.

Our only reservation is that it lacks the dynamism of other compact systems like the Quad L-ite Plus and Wharfedale Diamond 100-HCP, requiring high volumes to really make an impact. But there are still enough positives to make KEF’s E305 a top purchase.

Next, read our best soundbars round-ups.