What is the Kazam Tornado 348?

The Kazam Tornado 348 is a 4G 4.8-inch Android smartphone from a British-based company set up by former HTC execs that briefly held the mantle of the world’s slimmest phone until the 4.85mm thick Oppo R5 turned up. Slender design aside, it’s very much a mid-range range phone. Its 720p HD display and 8-megapixel camera mark it out as much, but its eight-core MediaTek processor suggests it might have a little more grunt than most mid-range phones.

This £250 phone achieves its goal of delivering a sleek and stylish phone at an affordable price. However, while it’s stylish, it lacks a really killer feature that would convince us to choose this over more illustrious rivals, and lags many where camera quality is concerned. 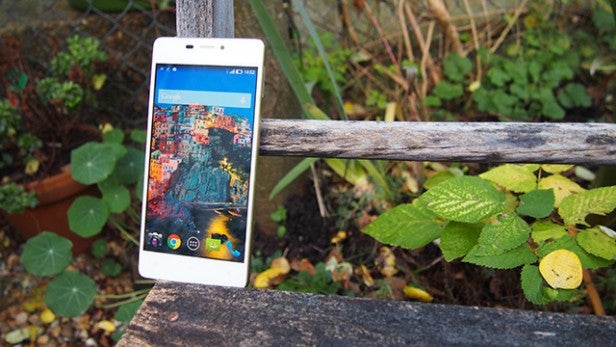 The super slim frame is the major talking point here but there’s no escaping the similarities with certain Apple and Sony phones, either. The champagne gold metal trim and slightly curved corners echo the iPhone 5S and iPhone 6, while the flat glass rear reminds us of the Sony Xperia Z3 and other Z-series phones. The trim does have a flatter, cooler anodized finish to it that gives the 348 its own character, but Kazam has clearly taken inspiration from those phones.

That’s by no means a bad thing, though, and while it doesn’t feel as nice to hold as Apple’s more delicate curves, it’s in no way uncomfortable. What’s more, the build quality doesn’t suffer too much for being so thin. At 5.15mm thick, it’s thinner than the iPhone 6 (7.1mm) and the Samsung Galaxy S5 (7.6mm) by some distance. It’s light too, just 95g, so much so you’ll barely notice it in your pocket. In the few weeks we spent with it, we saw no worrying flex in the body and the metal and glass materials ensure it doesn’t feel cheap or tacky.

SEE ALSO: Our pick of the best Android phones 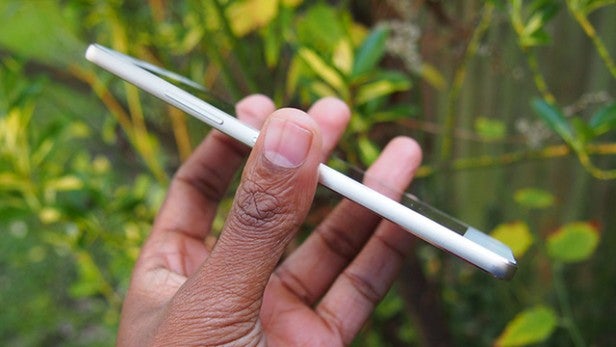 Around the back is a Gorilla glass panel that’s very Sony-like, although the 348 isn’t as slippery to handle as the Xperia smartphones. It’s here you’ll find the small speaker down at the base and the camera tucked up into the corner. It’s all very neat, though it does come at the cost of a non-removable back and the lack of microSD card expansion. That leaves you with just the 16GB built-in for all your apps, music and photo. Clearly Kazam’s vision puts design ahead of more practical concerns.

Up front, the Apple similarities continue. The slender bezel around the sides of the screen give it that nice 16:9 ratio for films, with capacitive Android buttons below the screen. The button placement on the 348 is similar to iPhones, too. The headphone jack lies at the bottom edge next to the micro USB charging port, with the micro SIM card slot on the right and the chrome metal volume rocker and standby button on the left. We found the latter slightly annoying, though, as they’re quite close together and the standby button is below the volume controls. This led us to often hit standby button when trying to turn down the volume. 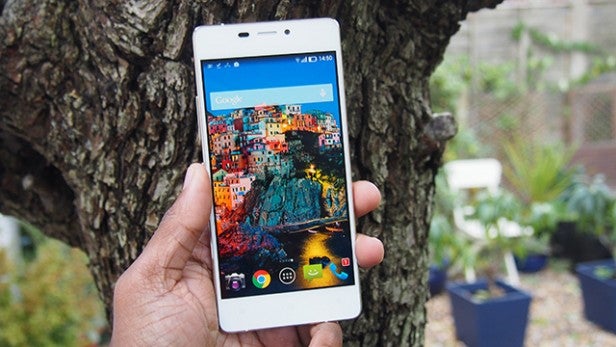 The 348 features a 4.8-inch AMOLED display that, combined with the super-slim body, makes this an easy phone handle in one hand. It’s not the best 720p display we’ve seen, but it’s solid enough performer for everyday tasks.

Its 720p HD resolution makes it about as sharp as similarly-priced phones, like the Moto G. That’s fine as Full HD displays aren’t common at this price, the Honor 6 being a notable exception.

This equates to 306 ppi (pixels per inch), which is ample to ensure good clarity for text and images. The AMOLED panel means colours are vibrant and blacks very deep, too, which is perfect for watching films.

Much like the AMOLED screens on Samsung’s phones, however, these colours can look a little oversaturated out of the box. There isn’t any special display modes to tinker with to improve matters, either. You won’t have many problems viewing this at night, while outdoor visibility is strong with only some minor glare issues.

As with all Kazam phones, the Tornado 348 is covered by the company’s free screen replacement cover as standard. That means if you accidentally smash the device’s display within the first 12 months of ownership – and many of us know how easy that can be to do – the company will replace the panel for you without charge. It’s definitely a nice little bonus to have on board.