What is the Kazam Thunder 450W?

The Kazam Thunder 450W is a Windows Phone that isn’t made by Microsoft. And it tries to outdo the Microsoft Lumia series at its own game in one obvious area: colour.

This is one of the brightest handsets we’ve seen, and is certainly one that will evoke strong emotions: like Marmite, you’ll either like it or hate it.

The phone’s design is inspired by the great-looking HTC One M7, which remains one of the best-looking phones ever made. The 450W could be described as being  an odd hodge-podge of other phone styles.

In some ways it’s behind the times; for starters, there’s no 4G for starters. Nevertheless, it’s a reasonable alternative to the Microsoft Lumia 640 and budget Android kings such as the Motorola Moto G. 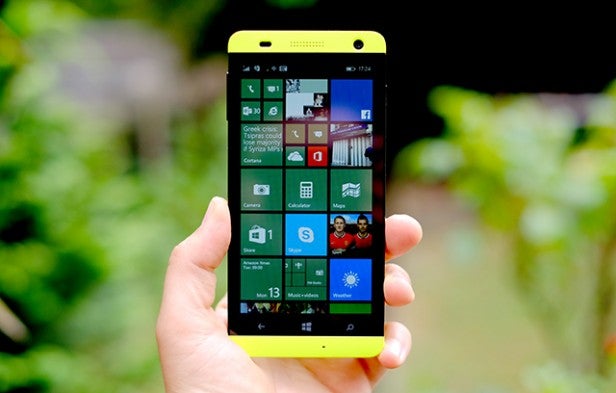 From the front at least, the Kazam Thunder 450W looks very much like the HTC One from 2013. Bold bands sit at the top and bottom of its face, the difference here is that they’re day-glo yellow instead of metallic.

It’s so HTC-like, in fact, that we were approached by a few people asking where we’d found such a “funky” skin for our HTC One phone. It may well be mimicry, but it’s one of most attractive phones we’ve seen over the past decade.

Not everyone will be quite so enamoured by the Kazam Thunder 450W’s highlighter-bright style. However, Kazam has executed the design pretty well, with a front-on look that’s both bold and confident. 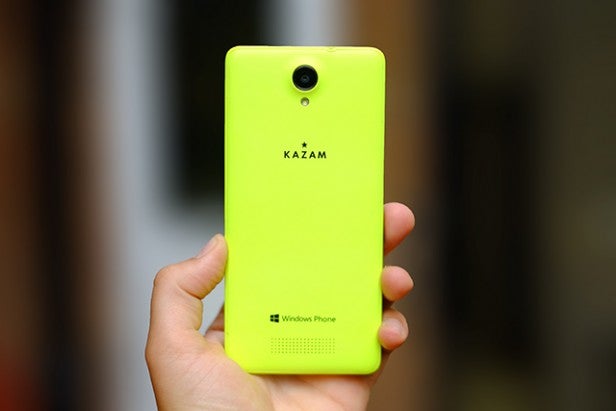 For all the similarities with the HTC One, the Kazam Thunder 450W is more modest in terms of build. It’s entirely plastic, with a thin battery cover that you can easily pull off with a finger.

Build quality is fair. The 450W creaks somewhat when any hand pressure is applied, and this isn’t only when flexing of the back panel. The sounds continue even when this panel is removed.

Given that this handset isn’t at the rock-bottom end of the market, we’d have expected the Kazam Thunder 450W to be a little more sturdy. However, on close examination it’s obvious why it suffers such issues. The 450W is a fairly seam-heavy phone, which results in plenty of tectonic plates rubbing up against each other. 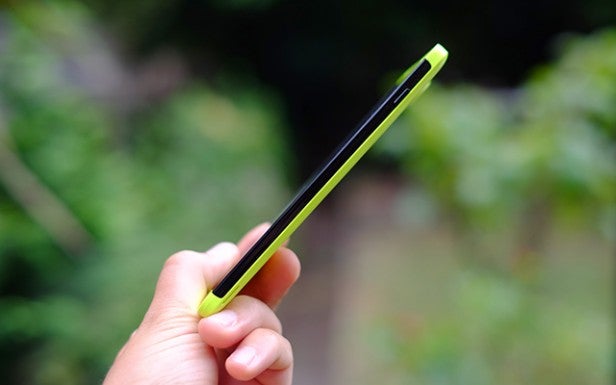 The Kazam Thunder 450W has what’s become a gold standard for entry-level and lower-cost mid-range phones: a 5in, 1,280 x 720-pixel LCD screen.

This IPS display looks reasonably similar to what’s on offer in £500 handsets – that’s to say it’s pretty big and pretty sharp. Naturally, much higher pixel densities are on offer from QHD and Full HD phones.

Colours on the 450W appear fairly natural, and an an ambient light sensor on the phone’s front lets it switch between brightness settings automatically. It’s here that we find the 50W screen’s main issue. The Auto brightness isn’t up to scratch. While the screen is perfectly capable of going very bright – enough to cater for super bright days – you’ll need to switch to the “High” backlight setting to actually make use of it. Take it outdoors and Auto brightness will leave the screen way too dim.

It suffers the other way too: it doesn’t quite go dim enough in low-light conditions either. 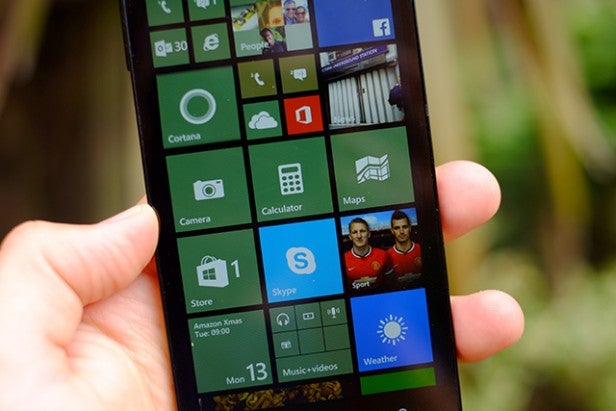 The Kazam Thunder 450W display also lacks some important finishing touches. First, it doesn’t use Gorilla Glass. While there is some form of toughened glass, in our testing it didn’t prove to be as tough as the Corning stuff – in other words, we scratched it.

The top screen layer also lacks an oleophobic coating, which would make rubbing off greasy finger marks easier. Trying to clean off fingerprints on the 450W feels as though you’re just spreading the grease around, unless you give it a proper rub-down with a cloth or T-shirt.

Once you learn to live with its compromises and quirks, though, the Kazam Thunder 450W’s basic screen quality is reasonably good.