Ever taken a taxi ride in London? Chances are, if you’ve ever hopped in a Hackney Cab in the middle of rush hour in a hurry, the London cabbie will take you on something of a hectic, hazardous and often hair-raising adventure down side alleys, dodging traffic as he or she goes.

It’s the kind of tourist attraction you just don’t get elsewhere in the world, with the many sights and sounds of the UK capital flying by at top speed as the streets are turned into a race course that makes Monte Carlo look positively pedestrian.

If you haven’t taken a cab ride in London, then there’s a way to experience this once in a lifetime (quite literally) experience without freaking out in the process. Load up Kayos by Jonathan Lanis and, within seconds, you’ll be tearing through London…well, if London had been destroyed by a nuclear blast and David Cameron had decided to rebuild it with a series of moving coloured blocks. Oh, and if we all drove spaceships, too. 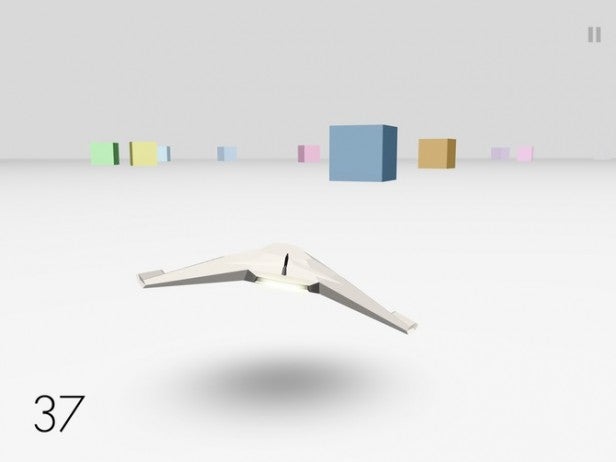 Using the iPhone’s accelerometer to steer, Kayos is one of those mobile games that can be over in a matter of seconds. Your only job is to steer through the aforementioned blocks, trying to avoid any contact in the process. As you travel, the game displays a running total, counting how long you survive with the idea to beat your top score before you inevitably run into trouble, ending the game for good.

There’s a boost system you can utilise to stream through the stage at quicker pace which, interestingly, also charges a shield gauge that you can use to deflect contact and keep you going for just a few more seconds.

The further you get, the more Kayos starts to play around with those blocks, with some tumbling over like columns in ancient Greece and others moving around, all designed to ensure that, at some point likely soon, it’s all over. It really does get ridiculously difficult, with what look like open spaces quickly becoming surrounded. Indeed, it’s very easy to drive into a cul-de-sac completely unknown, leaving you feeling a little hard done by when it comes to an end. 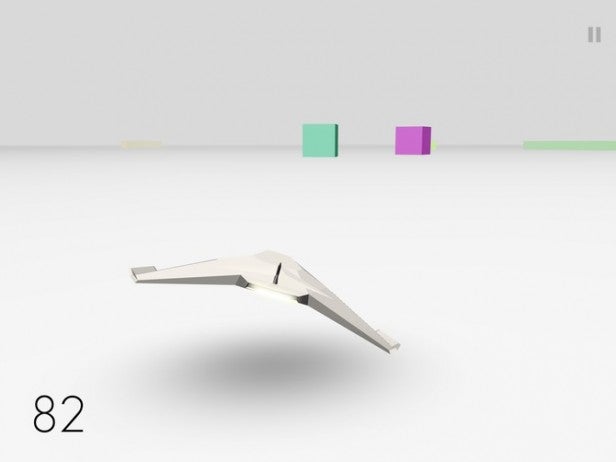 Nevertheless, in this respect, Kayos truly lives up to its name, but it’s hard to know why anyone would take this on more than a handful of times, given that the description above is, essentially, everything the game has to offer. Though Kayos boasts a leaderboard, there’s no way to share your score across social media, which seems like a massive oversight.

As such, Kayos – while boasting smooth, minimalist visuals and a catchy electro soundtrack – has an especially short lifespan and starts to lose the sheen it has almost instantly. The concept behind it and the delivery is solid enough, but no thought has been paid to keeping players engaged and, as a result, Kayos has no tail.

Which leaves Kayos in the awkward position of being a game that, viewed from a distance, has all the components of a good little package but, when put together in this fast and loose fashion, just feels a little by the numbers, a little tame, a little forgettable in truth. With a little more thought paid to both the design of the stages and the implementation of the obstacles, there’s every chance this could have been something quite special, but Kayos simply doesn’t have the content to deliver on its promise.

Verdict
The very definition of pick up and play, Kayos charges you with avoiding blocks as you fly through a sparse, white world, but the fact games can be over in a matter of seconds and there’s no social sharing means there’s very little incentive to play more than once or twice.