Kaspersky Secure Connection provides fast US connection speeds and has a free tier, but that’s about all you can say for it. This is definitely not a privacy-oriented VPN and it’s no longer even cheap for UK users.

It’s become de rigueur for antivirus makers to have a VPN and Kaspersky Secure Connection is a white-label version of Hotspot Shield, which was found leaking DNS information in 2018 but promptly fixed this when informed by security researchers, to the company’s credit.

The white-labelling here adds a bit of ambiguity as the service potentially falls under the legal jurisdictions of both the Russian Federation, where Kaspersky is based, the US and/or Switzerland where Hotspot Shield operator Pango – formerly AnchorFree – is headquartered. Although Pango says that its services are anonymous, Kaspersky’s extensive terms and conditions indicate that user data may be collected.

It also provides a very helpful free tier, which you can use without registering for a Kaspersky account. 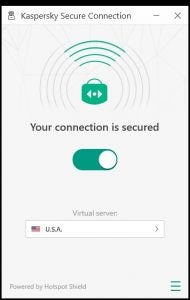 The VPN’s default installation settings opt you into the Kaspersky Secure Network, an anti-malware service which provides “instant response to new threats” and “real-time website reputation information.” If you’d rather not have this, you can untick the relevant box before hitting install.

The client opens above the notification area and is easy to use, connecting by default to the fastest available endpoint and with the option of selecting one of the VPN’s 18 endpoint countries. Free users don’t get to select their endpoint and are automatically assigned one, usually in Denmark or Ukraine.

Advanced settings allow you to configure whether the client opens at boot time, whether it connects as soon as it opens and how it behaves when you connect to an insecure Wi-Fi network. You can also select a specific country to connect to by default.

However, the privacy-conscious should note that there’s no kill switch to automatically disconnect you if your VPN connection goes down, which can expose your online activity to your ISP or someone on your local network.

Secure Connection uses the OpenVPN protocol but only allows you to connect using Windows, macOS, Android and iOS devices. No clients or connection instructions are provided for any other platforms.

Average HTTP download speeds for the January 2020 VPN group test, measured from a test system in the UK with a high-speed fibre connection, were 81.41Mbps from UK endpoints, 89.42Mbps for the Netherlands and 43.02Mbps from the US.

It’s useless for streaming UK media such as BBC iPlayer or All 4, which will be an irritant to anyone who just wants a seamless VPN experience in their own country, but I was able to watch US Netflix. The site has detected the service in previous months, but niche horror service Shudder isn’t picky and let me watch its US movies via Kaspersky’s VPN.

Should you buy Kaspersky Secure Connection?

The free version of the service – probably the most interesting thing about it – gives you 200MB of data a day or 300MB if you create an account. While this isn’t entirely useless, it’s nowhere near as flexible as Windscribe’s generous 10GB free data allowance or ProtonVPN’s uncapped free tier, and both of those have stronger and more transparent logging and privacy policies.

The paid-for extended version gives you unlimited data and extra endpoints on five simultaneous connections. However, UK users are once again stuck paying an inflated £7.99 per month or £49.99 per year, while those in the US and Europe benefit from regularly-available discounts at around half that price.

Before AnchorFree was renamed Pango, privacy groups accused it of logging user activity to serve targeted advertising, and Kaspersky’s own terms and conditions indicate that the Android app, at least, may carry out extensive logging.

Although it’s easy to use, it’s hard to recommend Kaspersky Secure Connection in general, especially as UK purchasers are now being charged a surprisingly high subscription price. It only works on the four most common mobile and desktop operating systems and there’s no kill switch, which means your privacy could be compromised if your VPN disconnects unexpectedly.

If you’re an advanced or privacy-conscious user and want a proven no-logging VPN service, Private Internet Access and ExpressVPN are your best bet, while those who want quick US connection speeds and video streaming should take a look at NordVPN.