Competing head-to-head with the evergreen (or red, blue) Numatic Henry for supremacy in commercial cylinder vacuum cleaners is Karcher’s T10/1. This bulletproof, bagged cylinder cleaner is built with an impact-resistant ABS plastic case, packs in a sizeable 1,250W motor, and offers a cleaning reach that’s good for the length and breadth of an office – which will be more than enough for most homes.

Under the lid is a strong, permanent nylon filter that’s dense enough to allow use without a bag, but the huge 10-litre bags offer ease of emptying and better filtration, and are relatively cheap too. So can this serious German vac show the UK’s funky Henry a clean set of floor tests?

The T10/1 is a solid vac, tipping our scales at 6.25kg without the hose and tubes attached. That is actually a fair bit lighter and slightly smaller than the Henry. Much of the Karcher’s weight is a result of the potent 1,250W motor, compared to the most recent Henry’s frugal 620Wpower plant – and, as such, the Karcher scores a fairly woeful E for energy efficiency. 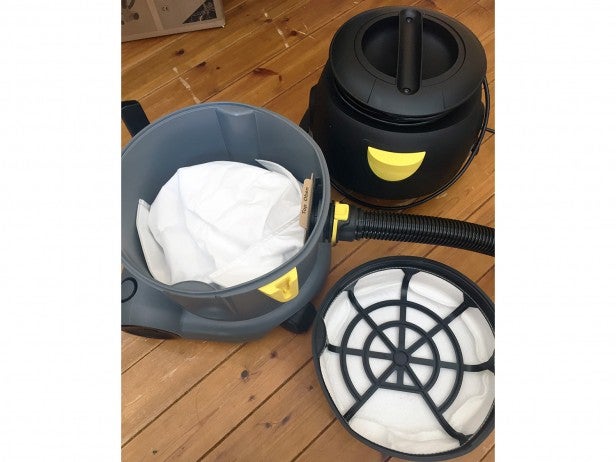 Flip up the side clips and the cleaner splits neatly in two, with the motor in the top section and the bin at the bottom. There’s a dense, washable nylon filter on the base of the motor housing that looks like it will last a lifetime.

You can run the Karcher with one of the brand’s large paper/cloth bags, or use it semi-bagless by installing a fleece filter frame below the motor. This will allow dirt to accumulate in the bin itself; you simply tip it out once you’re done – great if you have heavy debris such as brick rubble to vacuum up.

Using a disposable bag offers the same overall bin capacity but makes emptying the unit far easier, and also hugely improves dust filtration. That said, even with a bag in place, the T10/1 still only makes for a C rating for dust re-emission – exactly the same as Henry.

The 12 metres – yes, 12 meters – of mains cable can be wrapped in the channel that runs around the top of the cleaner for storage, and the cable itself is easily replaced – something commercial buyers will be pleased to hear. Henry scores points here for its internal cable winder, but loses out on sheer cable length by 2m of cleaning reach. The base of the T10/1 has two large fixed wheels and two front jockey wheels for easily being pulled around.

Unlike the Henry, this Karcher has on-board tool storage. You get two moulded-in stands for the tubes or the crevice tool, and a side clip that holds the floor head, either detached or when connected to the tubes and hose. 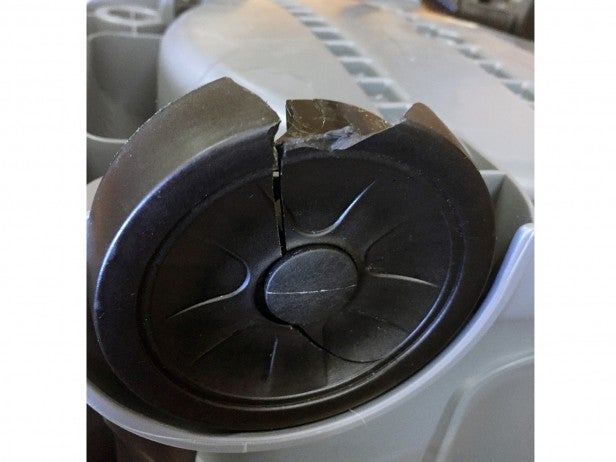 The Karcher’s hose is a fabulously long 2.5m, with a further 30cm or so of shaped ABS handle with a suction-release slider. The hose clips easily into and out of the body, and endured a minute or two being stood on by 80kg of TrustedReviews reviewer.

There are only two supplied tools, consisting of a rather short crevice tool and a multi-purpose floor head. This has a large rear roller and drop-down blade with bristles for hard floors. Henry scores here with a couple of extra tools, including a dusting brush as standard. The Karcher’s tools push-fit to the handle directly, or using one or both of the supplied metal tubes. These are definitely commercial grade and resisted as much abuse as we could muster.

This Karcher is designed to be dragged around by the hose and moves easily on all but the deepest-pile carpets. On smooth hard floors, a hefty tug will likely see it overtake you. If you do need to pick it up, the top handle is nicely balanced in the centre of the unit.

Rugged is the watch-word of these pro-style cleaners, and the Karcher lost some points here against Henry. While the case and most of the fittings feel just as solid as our face-painted favourite, our T10/1 had a broken plastic wheel straight out of the box. Still, we did tread on hoses, lean on tubes and dropped tools from the top of the stairs without any other breakages.

With a brand-new bag or clean fleece filter, the Karcher delivers outstanding suction power. It definitely sucks harder than the Henry, but not twice as much as the power figures might suggest. The big motor, big body and simple design of these commercial cylinder cleaners allows huge airflow, the likes of which most budget domestic cylinder cleaners simply can’t muster. 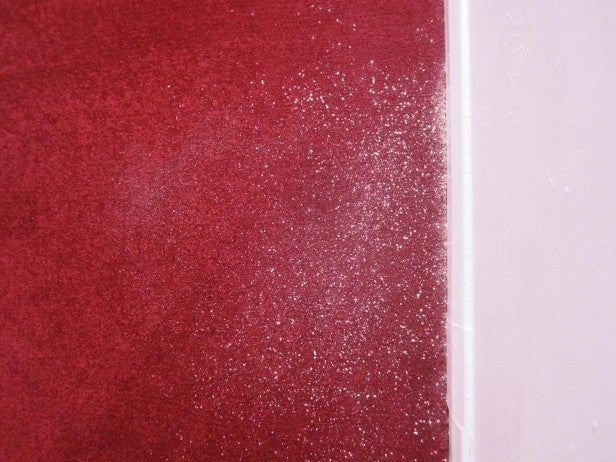 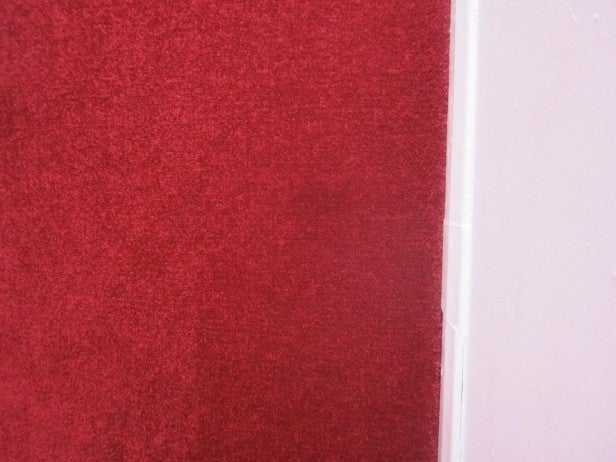 While both airflow rate and suction are impressive, you do pay the price for this in noise. We recorded around 81-82dB at ear height above the Karcher whilst cleaning carpet in our office. That’s 6dB more than the energy label states, and similarly 6dB more than the Henry. That isn’t super-loud by older vacuum cleaner standards, but you certainly won’t be stealth-cleaning your home or office.

On carpeted floors, the floor head requires plenty of effort to move around. Its flat base makes a really good seal for the high suction power. While this sucks up dirt from deep within the carpet, it tries to stick the head down like a limpet in equal measure.

However, if you have the skills and energy to get the Karcher’s floor head mobile, cleaning results are decent. Open-carpet cleaning proved impressive considering the Karcher’s E rating, and edge cleaning was also very good thanks to the high airflow rate.

Out onto hard floors, where a flip of the rather stiff foot-switch on the head brings down a row of bristles at the front and a soft plastic blade at the rear. The bristles have steps cut into them so they don’t simply push debris out of the way, and the rear blade does an excellent job of concentrating the suction in the area directly beneath the head.

Our oat-test results were perfect in a single pass, and the T10/1 performed superbly at pulling dirt out from deep within floorboard cracks and tile grooves. A slight resistance to movement remains, but if you’re strong enough to move the Karcher’s head around on carpet, hard floors will be a breeze.

Super-length cable, super-length hose and decent-sized tubes add up to great reach and very easy stair-cleaning in most homes.

Simply place the cleaner at the top/bottom and let the hose and tool reach do the rest. Alternatively, being slightly smaller in footprint than the Henry and near 2kg lighter, you can walk up the stairs and place the T10/1 down on each step as you go.

Our only stair-based issue would be that the main floor head is quite a handful on domestic stairs. This is particularly relevant if, like us, the stairs turn half way up, creating some narrow wedge-shaped steps. The size of the floor head and the level of suck-down again make this cleaner a handful to use on stairs. A smaller tool of some sort would have been very helpful here.

Let’s face it, unless you work in a veterinary clinic, pet hair in a commercial environment isn’t likely to be a major issue. That said, for home use the T10/1 needs to be able to handle the detritus of furry friends – and did so with surprising ease, despite the lack of rotating brush bar in the floor head.

Thanks to the super suction power and good (if old school) head design, the Karcher cleared our 30cm test patch of mixed dog hair on nylon carpet in around 16-17 seconds. While that’s a fair bit off of the pace of dedicated pet-specific cleaners, it’s none too shoddy – and exactly the same time as the Henry too. 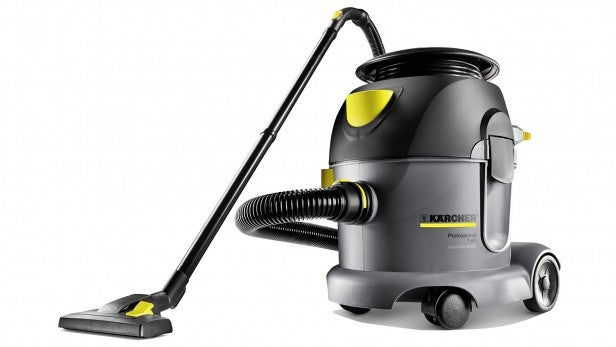 However, the Henry hits back with a better selection of tools for a home environment, better energy efficiency, and is considerably quieter in use too.

It’s a close call between the two then, but given that in a commercial cleaner you’re looking for solidity and robustness, getting the Karcher out of the box to find a broken wheel didn’t inspire confidence. The T10/1 is a solid contender for a true commercial vacuum cleaner, but Henry’s smiling face wins the day at home.

A decent option for more commercial and heavy-duty vacuuming tasks, but the Karcher T10/1 doesn’t deliver enough to knock Henry of his throne.