What is the Karcher SC5?

If you want serious steam cleaning power, super-fast hard floor steam mopping and a machine built to last, look no further than the SC5. On full power, we have never found a domestic steamer that can top 4.2bar steam pressure, has a huge tank and cut-through cleaning performance. The eye-watering price and lack of window squeegee are the only caveats to stop it bagging full marks. 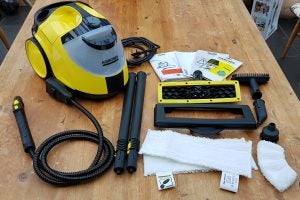 At nearly £500 Karcher’s SC5 Easyfix Premium is the most expensive steam cleaner we have tested to date. No surprise then that is also the most powerful and packs more tools and features than you can wave a dirty mop at. 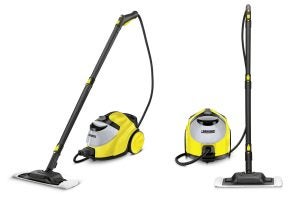 With a heater over 2kW, the SC5 is likely to pack a big punch, and the 2l tank capacity should make sure that power doesn’t leave you dry in minutes. In fact, the tank is in two parts. It has a 1.5l refillable reservoir and a 0.5l working tank that means you can refill the larger tank while keeping the unit powered up and steaming. The machine is rated at a whopping 4.2 bar of steam pressure on its maximum setting. Thankfully there is a variable steam power control for more delicate cleaning. 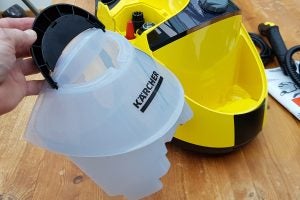 Turn the control a step past the maximum setting and the SC5 goes into VapoHydro mode. This mixes hot water with the steam, adding a sort of jet-wash to the steam power. While you are not going to need that for floor mopping duties, it adds serious cleaning gumption to the SC5’s detail hand tools.

The central steam unit is a fairly hefty 5.6kg empty, and over 8kg full of water and with a few accessories clipped into the onboard tool storage. A top handle in the middle makes it very easy to cart around though, and almost all of the tools and accessories can be housed on built-in mounts, sockets and posts for storage. 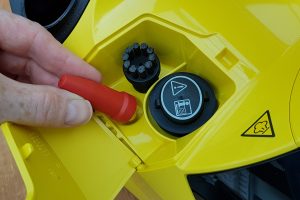 The 2m long steam hose clips to the front of the machine with firm pressure. The universal handle features a big trigger, accessory clip and a lock switch. This should be used to stop steam coming out and potentially scalding yourself if you change tools while cleaning. Having initially ignored this advice, we can vouch for its usefulness.

All the tools can be used clipped directly onto the handle for up close cleaning or extended by one or two solid-feeling plastic tubes. The main Easyfix floor-mopping head has a tilting and pivoting neck for enhanced manoeuvrability and is frankly huge compared to most steam-mops. This promises speedy mopping with a wide cleaning sweep. For the technically minded, Karcher says the wavy channels in the plate a form of a type of lamella particle separation effect to help shift dirt. As an ex-engineer, I’d say that claim warranted a sceptically raised eyebrow. 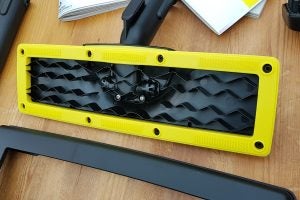 The Easyfix head promises full-width steaming through an even bigger Microfibre Floor cloth that attaches very securely by long hook and loop strips along the base. A little step-on tag on each cloth allows you to remove the cloth from the head without getting hot mucky fingers. Two of the washable microfiber cloths are supplied. A carpet glider attachment clips over the cloths so you can tackle soft flooring, too.

The detail tool roster includes (deep breath) a large square brush for tough cleaning with a microfibre cover that fits over the entire brush for a buffing effect. Attach the detail nozzle to the handle and you can then fit on the funky round brush, small detail brush or the power nozzle. All these have bayonet fitting that clip securely in place. 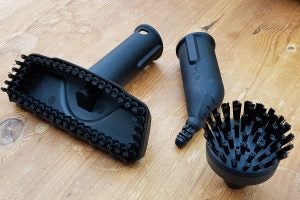 As a final flourish, you get a packet of decalcifying powder to clean the unit in hard water areas. Optional accessories include spare pads, brass detail brushes and even a clothes-ironing station. On the downside, we were pretty disappointed to see no window squeegee attachment supplied or even available though. 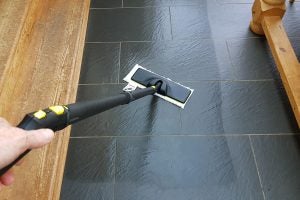 The water reservoir lifts out with ease and has a huge fill spout that even I couldn’t miss. Power the machine up and it’s ready to go within three minutes. 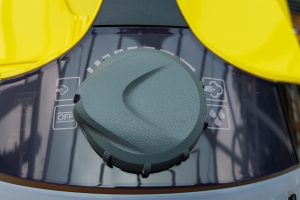 Tools and accessories clip together with a solidity that suggests they are going to last and last. Neat touches include little rubber seals in the bayonet fittings that stop the detail tools leaking or dripping back down the handle.  The SC5 cleaner body has a rather disappointingly short 5.9m cable but wheels large enough to see it rolling over most domestic hazards. Indicator lights on top to show when its heating/ready. 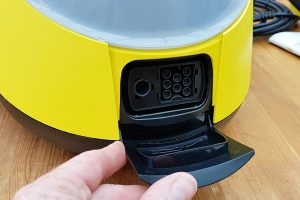 A few blips on the trigger demonstrates that the SC5 produces a properly prodigious amount of steam – even on its lowest setting! Wind the dial up to maximum, and you could turn a small room into a sauna in minutes. Great billowing clouds of steam are ejected at a serious pressure, made even more potent with the Power Nozzle. That directs the steam like a jet and in open space punched the steam over 2m out from the handle. Plenty of cleaning power here then.

With the floor-mopping Easyfix head and tubes attached, the SC5 turns in a formidable steam mop performance. The huge head covers the floor surface in double-quick time and the SC5 has the steam power to back up the size. We used a mid-setting here and were never less than impressed with the amount of steam on hand. The head is light, it slides around easily and we never had an issue with the microfibre mop coming loose. 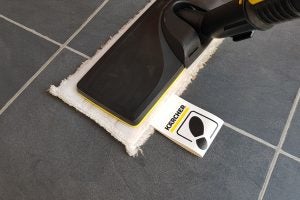 After just a small test patch across riven tiles, the amount of dirt pulled up by the Microfibre cloth was staggering. Even the grouting looked cleaner after the Karcher treatment. Moving to the laminate floor in the kitchen was perhaps even more impressive. The head glides with ease,  cleaning a wide swath as it goes. Regarding cleaning speed, we can’t think of a quicker floor mop. 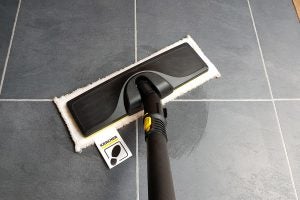 We struggled to find a use for the larger of the brush roster but putting on its Microfibre cover proved ideal for kitchen surfaces and windowsills. The combination of serious steam and the cloth lifted grime and wiped the surface as it went. 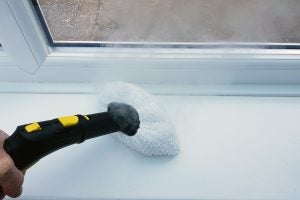 We clipped on the carpet glider attachment, which allows it to, well, glide across the carpet. We were not expecting great results as the test rug had been shampooed only a couple of weeks previously. Yet, a swift run over the entire rug showed a fairly grubby looking mop pad suggesting the steam action was certainly lifting dirt. On stains and deep-down dirt, a dedicated carpet shampooer is going to produce a much better result, but for a quick surface spruce, it does the job. 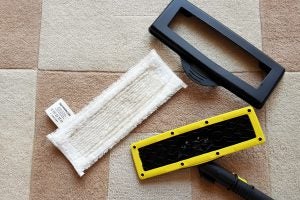 We used the funky round bristle brush around the sink bowl to good effect, on shower tile grouting and across on wire mesh of the cooker hood filter. The steam shifted the soap-residue and grease well although the sheer quantity of steam made the proceedings rather drippy and wet. if you want lots of steam to shift stubborn grime that is a natural side effect. For most detail cleaning jobs have a cloth handy to dry up. 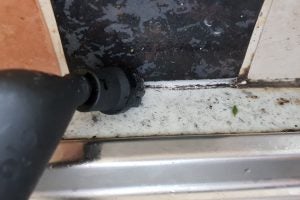 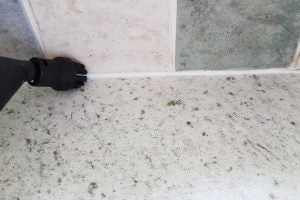 The smallest brush was a clear winner for detail cleaning around the base of the kitchen sink and the worktop/tile join. The combination of steam and the action of the brush cleaned off a lot of long-standing grime but do be careful not to scrub out any sealant as the SC5 is plenty powerful enough to do that.

The Power Nozzle is red for a good reason – it should only be used in extreme circumstances! With the SC5 on maximum power, it creates an extremely powerful jet of steam. Switch on the VapoHydro mode and it’s more impressive still. The combination of a huge about of steam and high-pressure hot water droplets is a staggeringly potent steam/jet-wash combination. We tackled a dirty bike chain with great results and it even cleaned concrete patio tile grouting in seconds. 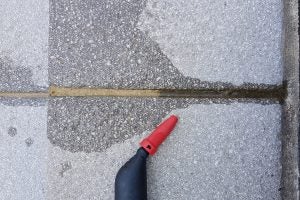 With the water being injected into the steam flow its very wet operation though. Expect puddles of water on whatever you point the jet at in VapoHydro mode, and quick use of the water reservoir. Thankfully the SC5’s continuous operation while refilling means that won’t mean a major halt to your steam cleaning. 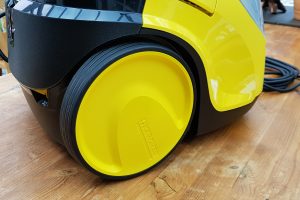 Should I buy the Karcher SC5?

The SC5 Easyfix Premium is a beast of a steam cleaner with a versatile roster of cleaning tools and abilities. As a steam mop, few dedicated models can cover ground with such speed and cleaning potential. As a detail steamer, the VapoHydro mode is unrivalled for shifting serious grime. The only caveat is that seriously premium price, for which we would have expected a window squeegee tool and a longer cable. Yet, for all-around steam cleaning and steam mopping ability, few models on the market can touch the SC5 in performance.

A super-powerful, easy to use all-round steam cleaner and steam mop that goes a long way to justify its serious price ticket.