The Karcher SC 4 EasyFix is a powerful cylinder steam cleaner that can deal with oil, limescale and other tricky staining. While it may seem almost too powerful at times, enveloping everything in steam and soaking entire surfaces with hot water when using the manual tools, it’s all about finding a balance – and keeping some dry cloths close. It’s easy to fill and can run continuously for a while thanks to a separate water tank and boiler. You don’t get many accessories for the price, though – most are sold separately.

The Karcher SC 4 EasyFix is a cylinder steam cleaner from the market leader. While it’s slightly less powerful and comes with a smaller range of tools than the Karcher SC 5 EasyFix Premium, it’s a step up from the Karcher SC 3 Steam Cleaner. The SC 4 packs plenty of power, blasting away difficult-to-remove substances such as limescale and oil, but it also leaves everything soaking wet.

While the price here is more affordable than the flagship SC 5, it’s still a little steep considering the limited number of accessories it comes with. The SC 4 EasyFix Premium, at £30 more, comes with a couple of extra tools, but still only one small brush and no squeegee tool – items that are relatively standard with most steam cleaners.

Karcher SC 4 EasyFix Steam Cleaner – What you need to know

Decked out in Karcher’s recognisable yellow, the SC 4 EasyFix has an oval-shaped plastic body featuring numerous nooks for storing the accessories and power cable. It has a castor at the front and two larger wheels at the back, allowing for good manoeuvrability.

The semi-opaque plastic water tank is removable, which makes for easy filling. Since the tank is separate from the boiler where water is heated, you can remove it even in the middle of steaming to refill. A faint MAX line indicates the maximum water level, but common sense is important here since the tank is essentially open at the top. 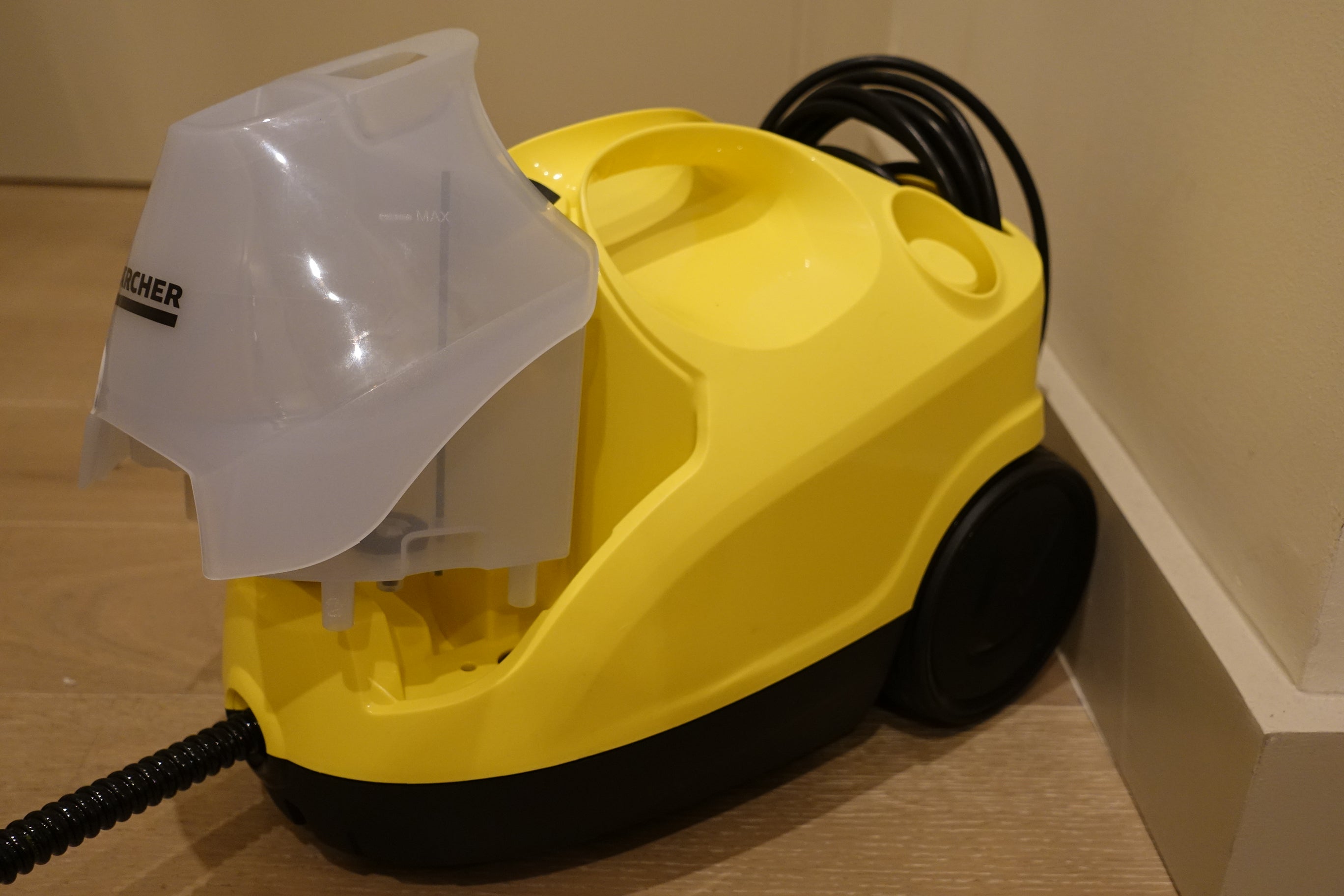 The reach of the 1.84m steam hose with the steam gun can be further extended by adding either one or both of the extension tubes, which measure about 51cm each. This also means the 4m power cable doesn’t feel too short – although it’s the shortest I’ve seen with any floor-focused steam cleaner.

The floor head comes with a microfibre pad, which is recommended for washable walls as well as floors. The detail nozzle is handy for nooks and crannies, and can be fitted with the round brush for a more thorough clean. It’s a shame there’s only one of these provided here, since the bristles can become clogged up with limescale or oil pretty quickly.

The manual nozzle is pleasantly hefty and comes with a microfibre cover, which is useful for upholstery, glass and mirror steaming. But, considering the premium nature of Karcher’s products, it would be nice if the company threw in a squeegee tool or a brass bristle brush.

The “on” and “off” switches are located next to the removable water tank on the main body of the steam cleaner. Below those switches you’ll find two symbols. The right-hand symbol will flash red to signal low levels of water. The left starts blinking green to show the cleaner is heating; it stays green when the cleaner is ready to use. 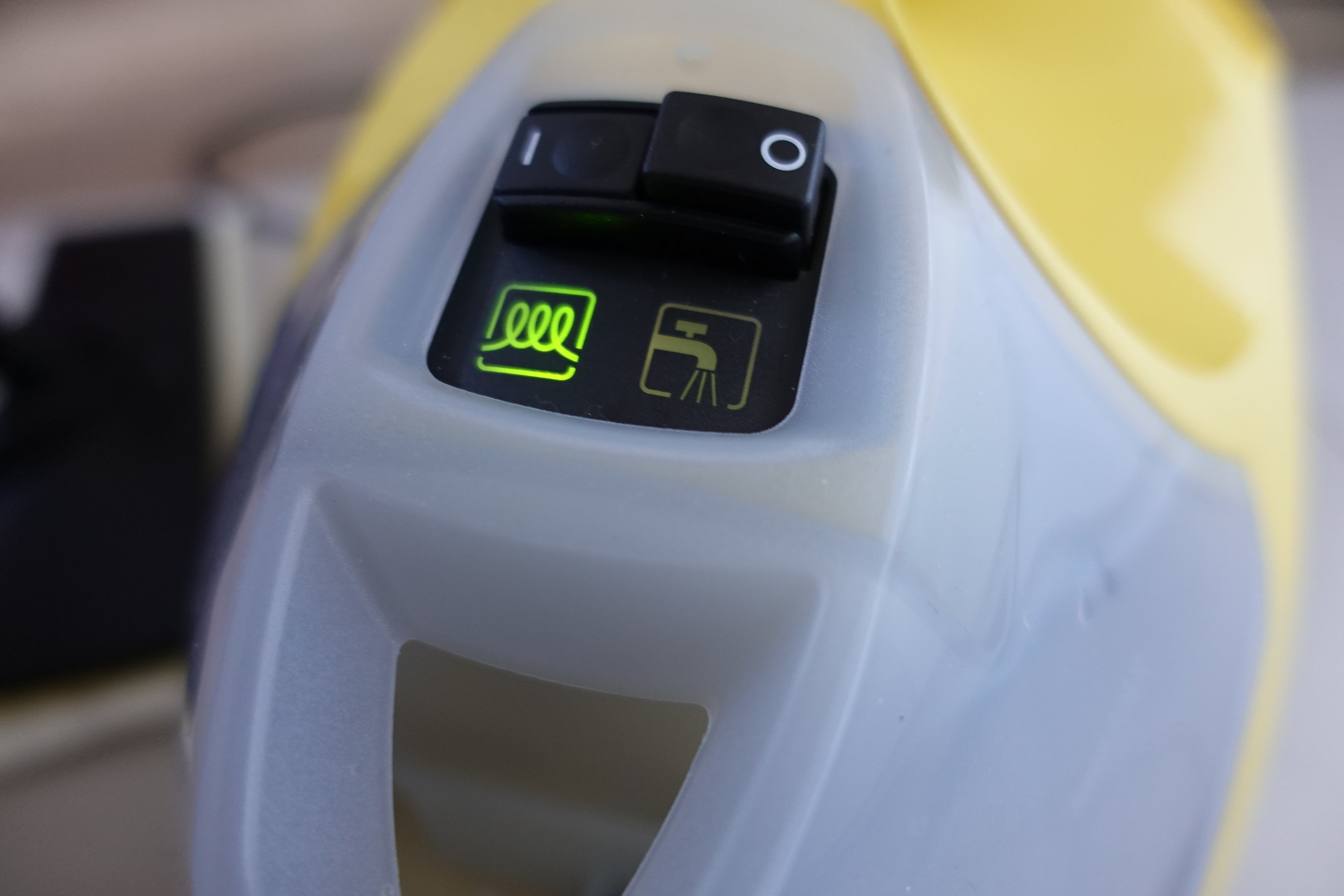 The controls are easy to use

The cleaner will initially produce a sound as water is pumped from the water tank into the boiler for heating. This will continue throughout the cleaning process, meaning the Karcher SC 4 isn’t the quietest device . However, you’re more likely to be focused on the hissing steam coming out of the steam gun by then.

Although the SC 4 EasyFix’s packaging says it will be ready in 4 minutes, it took just inside 3 minutes to heat up – not a bad result for a cleaner of this size.

The steam volume can be controlled to a degree by a switch on the steam gun. This features three stages: maximum steam volume, reduced steam volume, and a child lock. Note that the switch is quite stiff, but at least this means there’s no chance you’ll push it by accident.

This cleaner’s performance was impressive overall – if a little too powerful at times, resulting in thoroughly soaking some of the surfaces. Using the manual nozzle on the lower steam setting, I removed dirt that had gathered in my bathtub. While the steam cleaner blew all the dirt loose from the tub, it still had to be rinsed away.

Next adding the microfibre cover on the manual nozzle, I managed to remove soap and limescale from my bathroom mirror and shower screen. Some stubborn limescale right next to the shower remained – but to be fair, even the chemicals I use for normal cleaning struggle with that area. 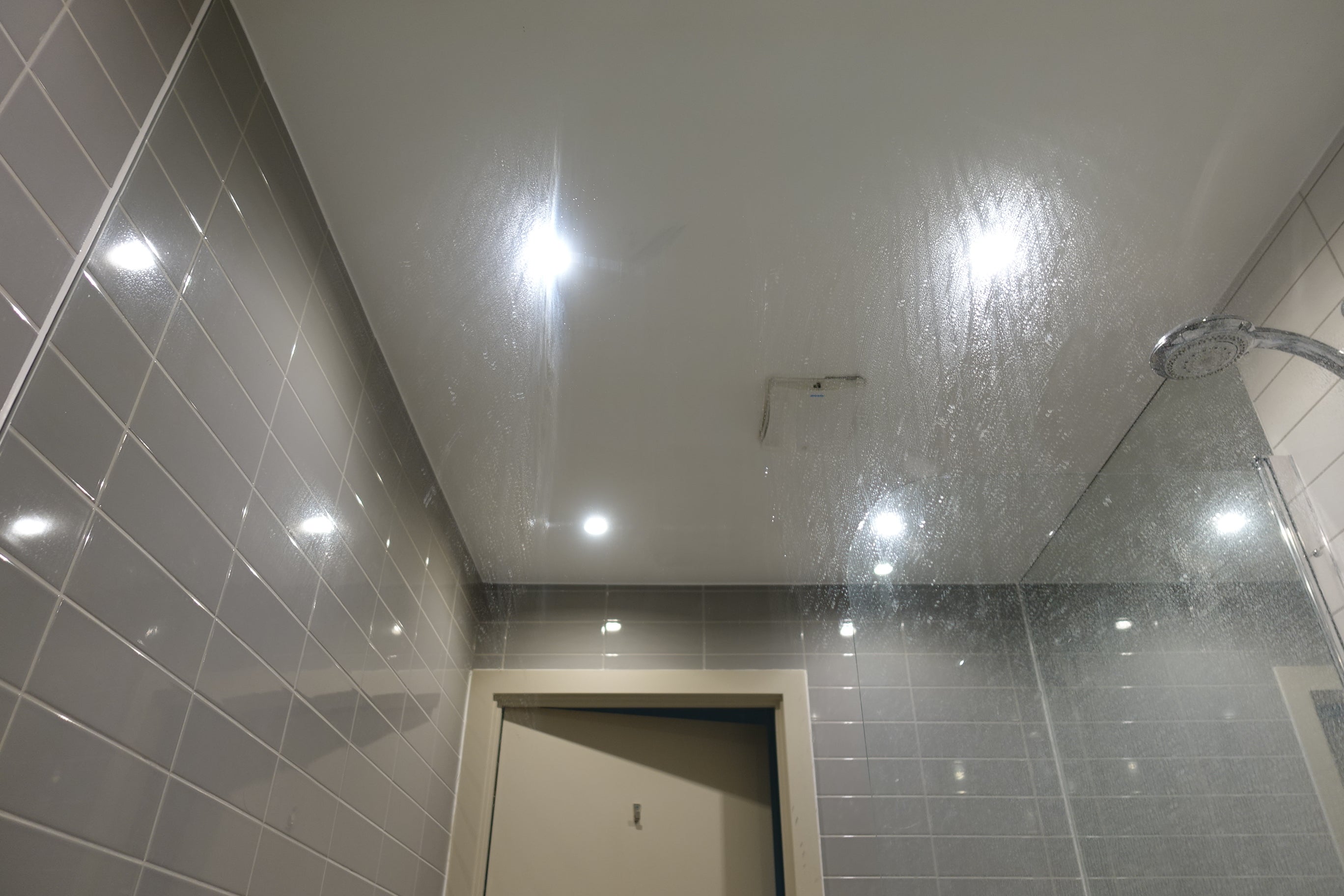 The manual nozzle and cover combo worked for cleaning windows – although drying and polishing was required afterwards because of the amount of water the steam cleaner produced. 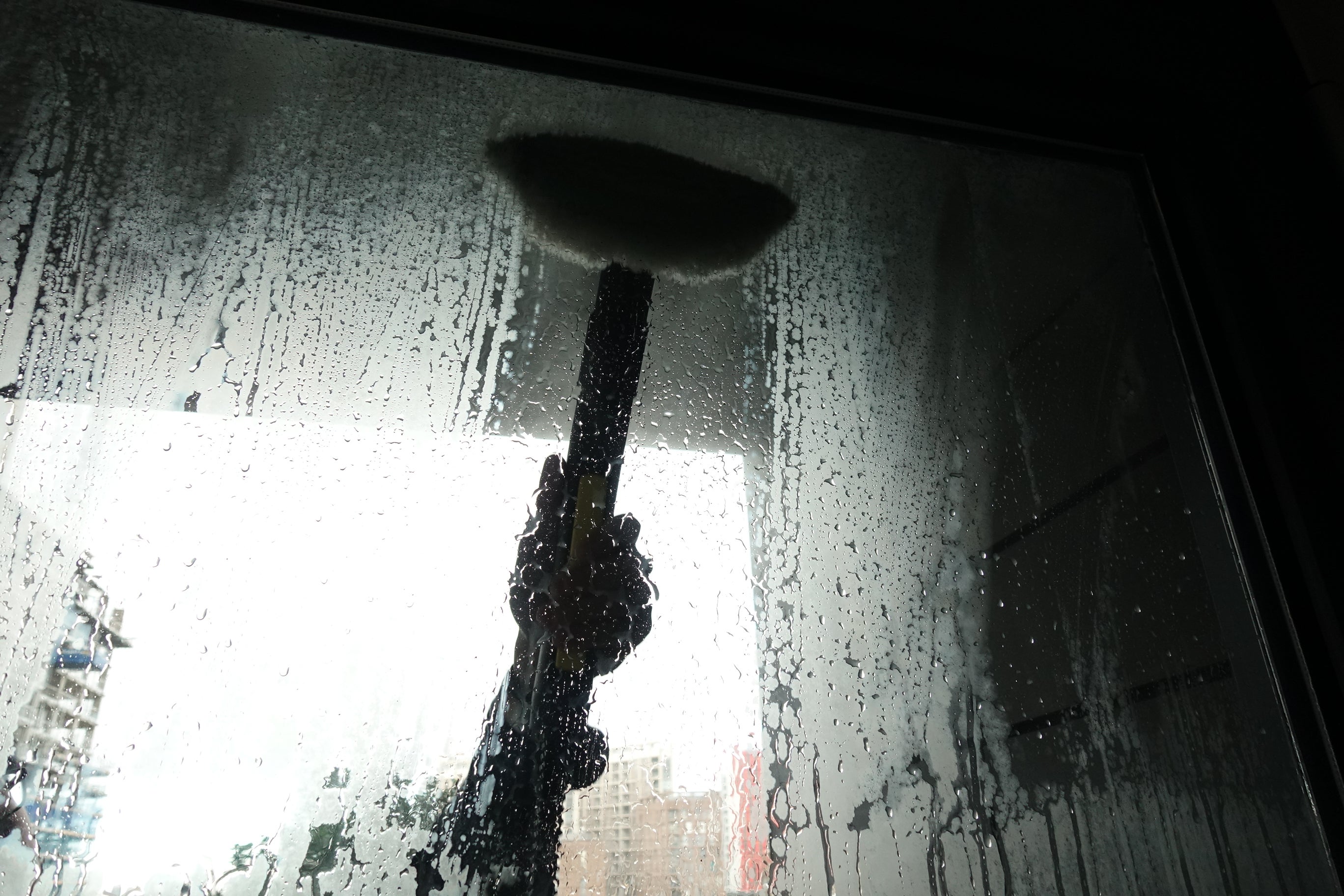 Next, I used the same tool on my red sofa. Even on the lower steam setting the cleaner managed to soak the sofa quickly. I was no longer sure how much dirt had been removed, but judging from the state of the cloth, I figured it had gathered plenty. 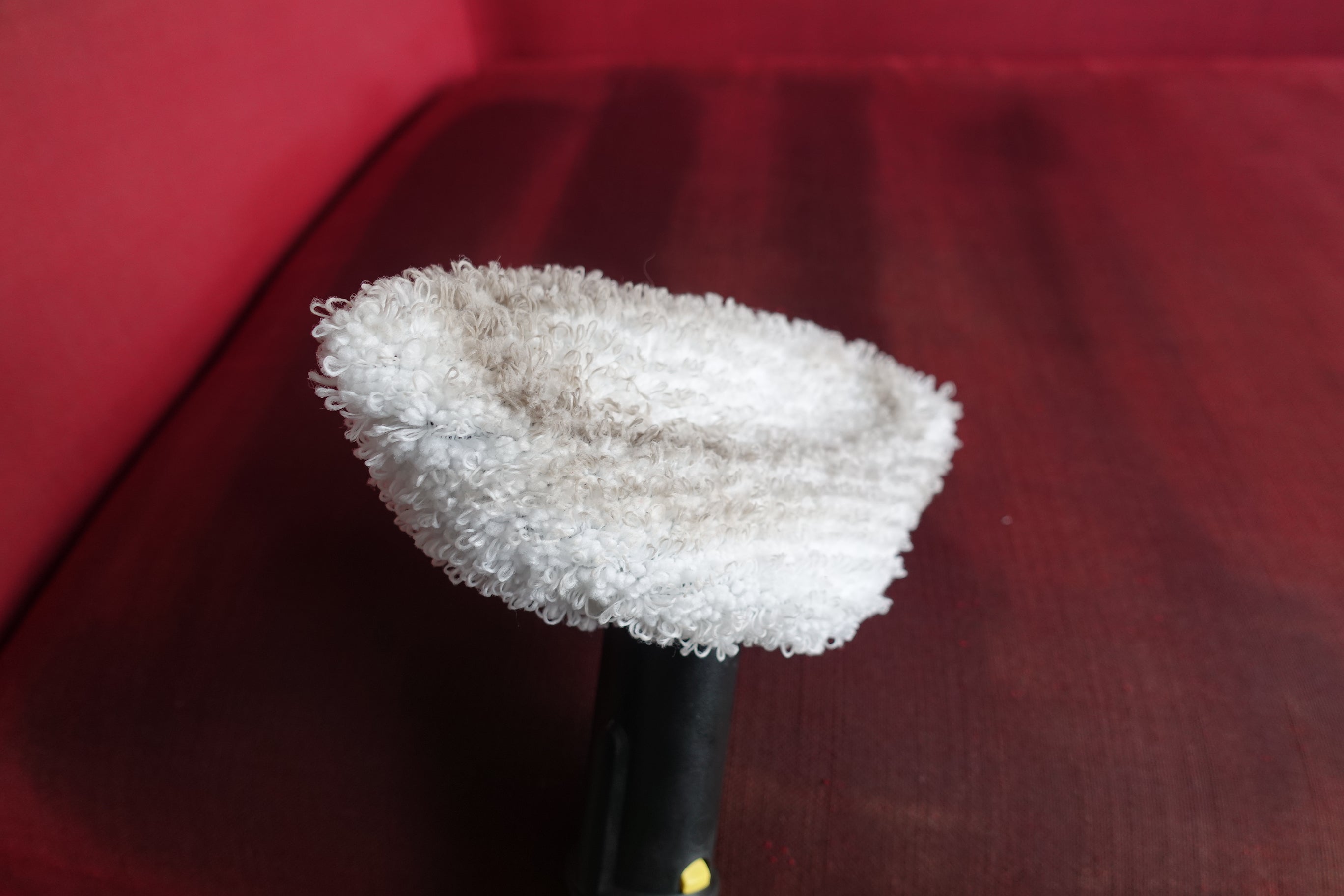 Yet, when dried, the sofa didn’t look all that different; perhaps a little brighter in places. It’s likely I should have steamed it for longer, but I didn’t want the moisture travelling all the way into the cushion. 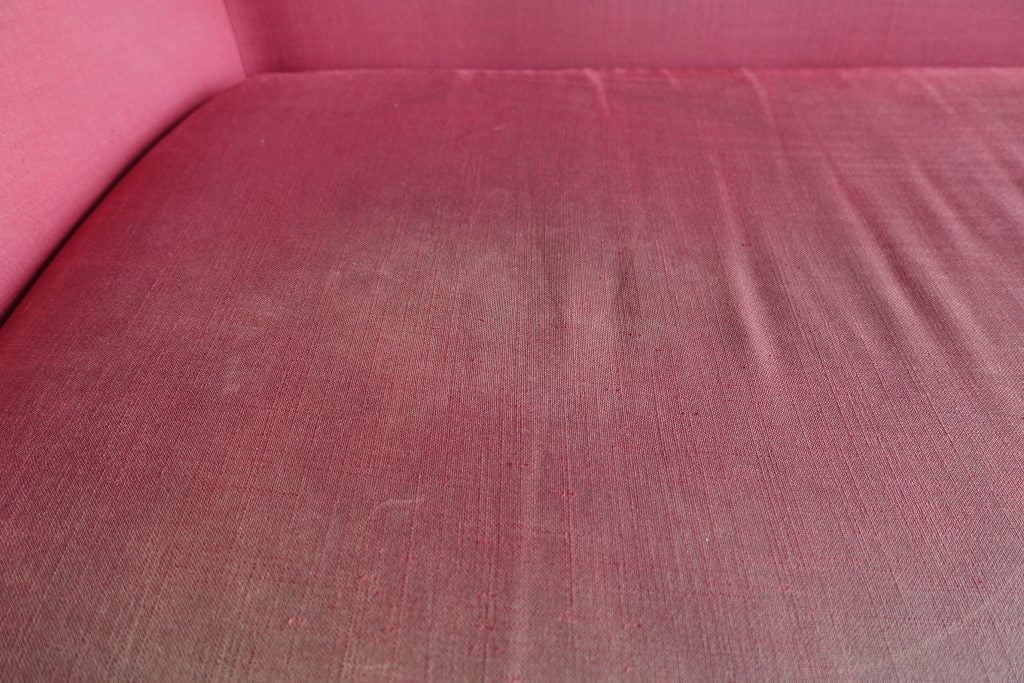 Switching to the detail nozzle and small brush, I set about scrubbing some grouting on the kitchen floor. The cleaner managed to remove some of the grey, but not all of it. Things improved when I switched back to the manual nozzle and used one of its edges to wedge out dirt from between the narrow gaps. The grouting was gleaming white once I was done, but much drying and polishing was required thereafter, since both nozzles had emitted lots of water – even on the lower steam setting. 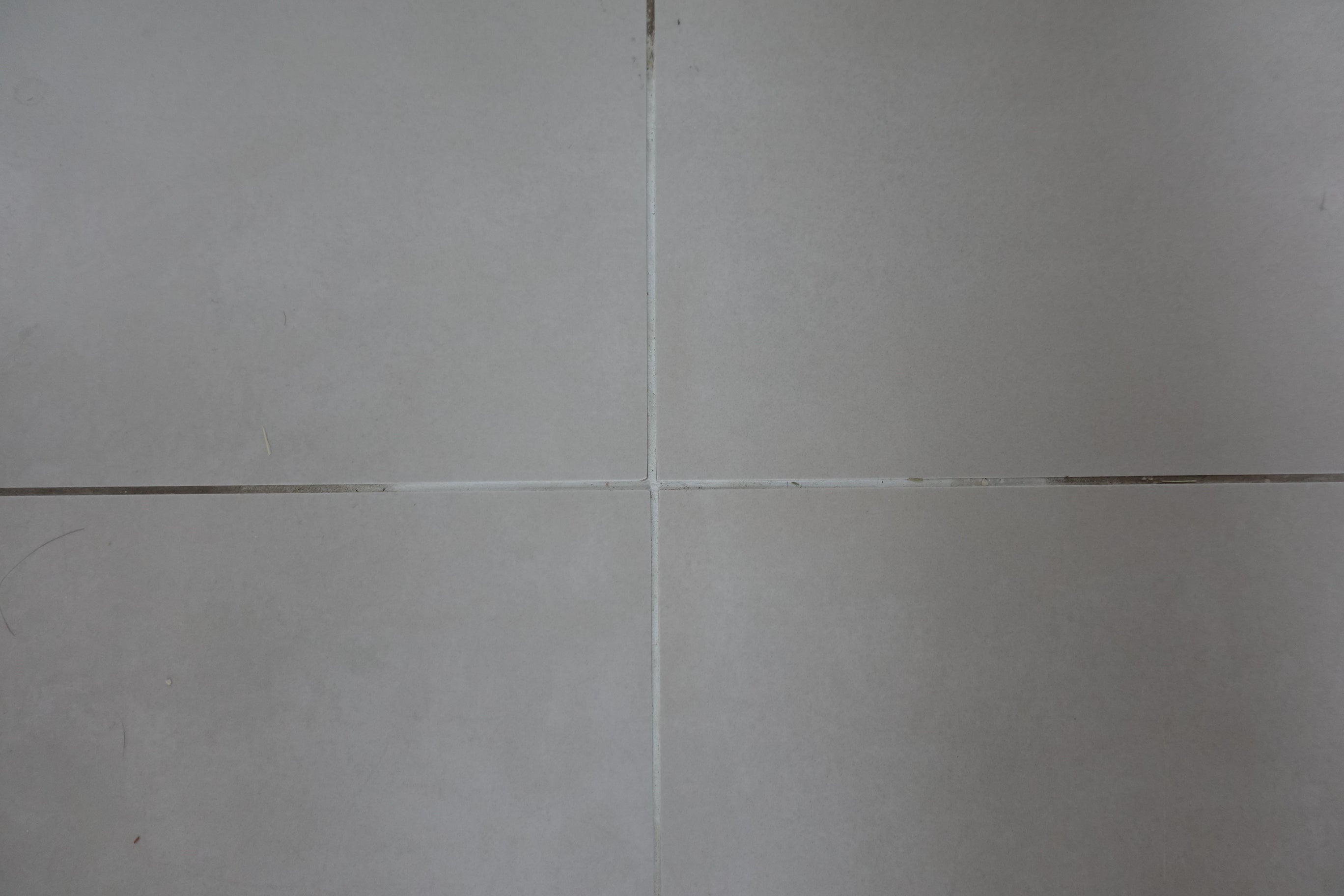 Both the manual nozzle and the small brush proved handy for scrubbing soap scum and limescale off the edges and sides of my kitchen sink. The small brush worked well removing grease from my ceramic hob – but it also soaked it in water, which required a wipe-down.

The small brush also made a good dent into the oil on the inside of my oven door, making a patch of what I considered a permanently brown surface transparent again. It also managed to scrape a significant number of burnt bits off the bottom of my oven. 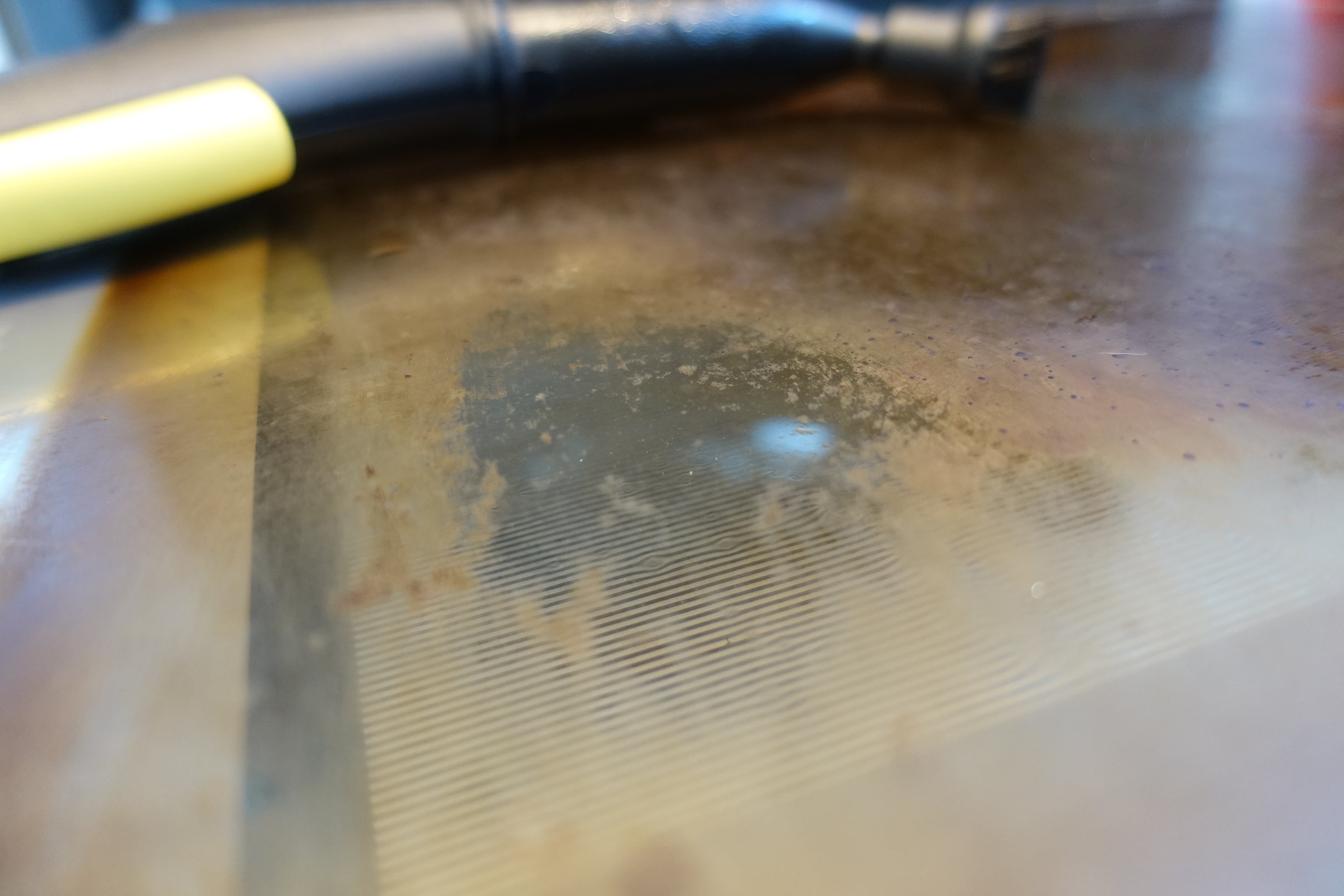 Finally, I was ready for some mopping, fitting both the extension tubes and the floor head with microfibre pad on the steam gun.

Dried muddy water was removed from textured wooden floors in a matter of seconds, using the lower steam setting. While the floor was still wet, there were no watermarks after it had dried. 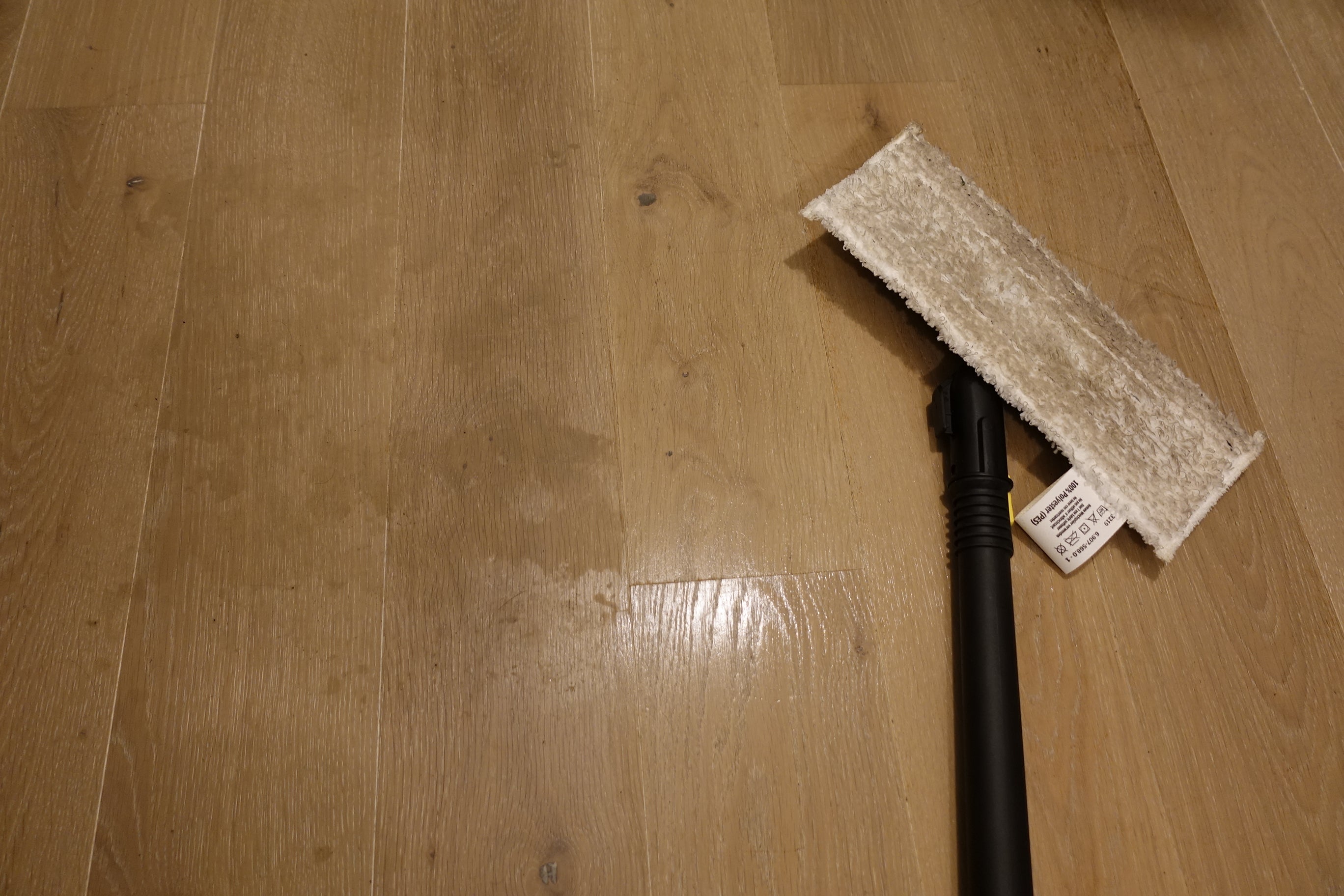 The next challenge was dried tomato paste on smooth kitchen tiles. Although I needed to apply some extra pressure on the stick and increase the steam volume, the Karcher SC 4 EasyFix managed to eliminate all signs of dirt. The only downside was the slightly reddish water, which couldn’t be entirely mopped up, turning into faint red marks when it dried. 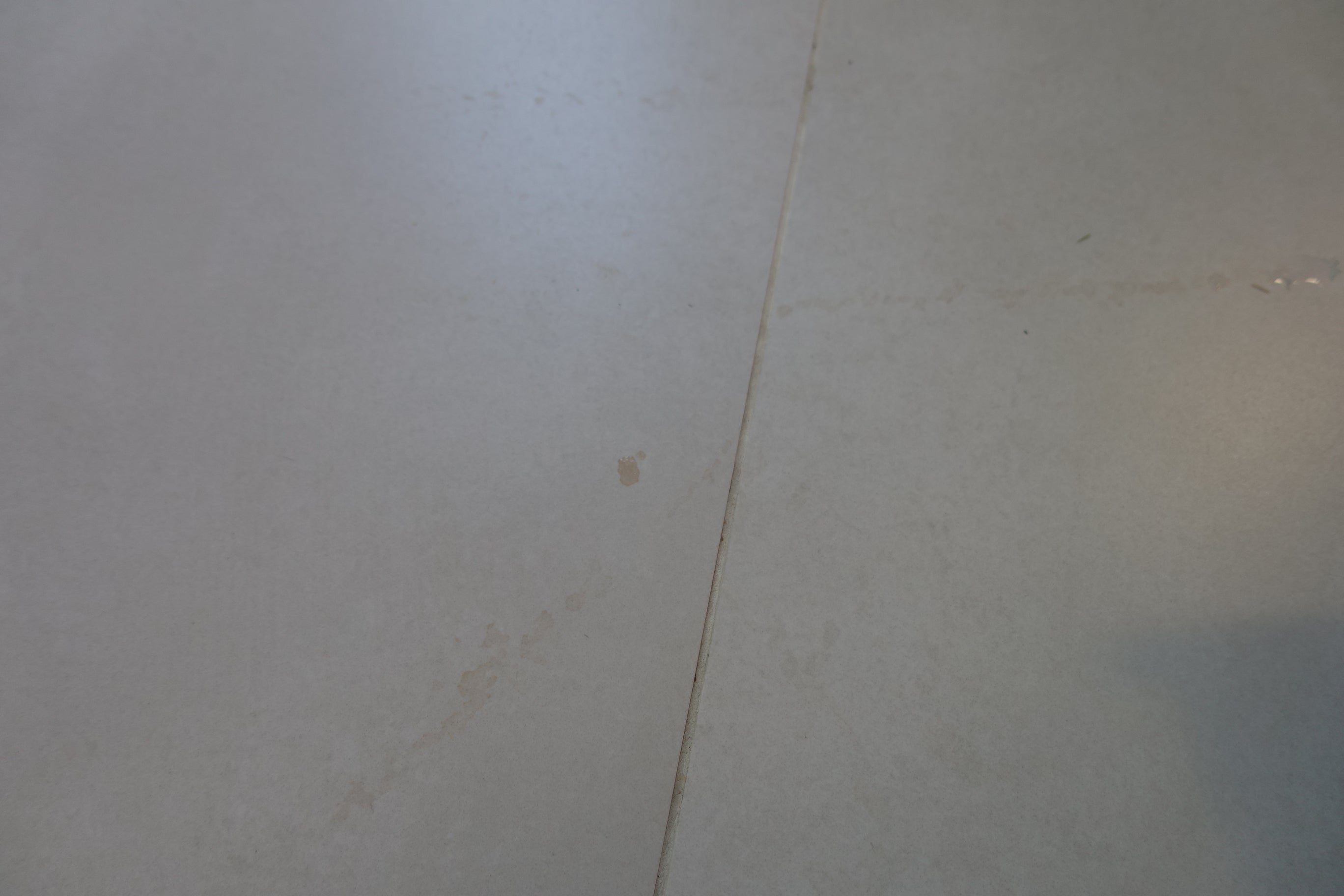 Overall, this cleaner delivers great results, but it needs to be handled with care. Perhaps being less steam-trigger happy would be one of the ways around the issue of excessive water. And it never hurts to keep a few microfibre cloths handy for drying purposes.

While this appliance feels safe in general, the amount of steam it produces can be quite overwhelming, at times making it difficult to see what you’re doing. So, it’s best to be mindful of that and the hose, which tends to become a little warm.

Should you buy the Karcher SC 4 EasyFix Steam Cleaner?

If you’re looking for a powerful steam cleaner, the Karcher SC 4 EasyFix packs a punch. While it isn’t as expensive as the flagship Karcher SC 5 EasyFix Premium, it’s still pricey considering it comes with only a few extra tools. Meanwhile, the more affordable Dupray Neat Steam Cleaner comes with more accessories, such as a squeegee tool, a brass bristle brush and an array of small brushes.