Kameo: Elements of Power is beautiful. It’s probably one of the most beautiful games I’ve ever seen, and certainly the visual highlight of the Xbox 360 launch line-up. It’s the sort of game that, back in the days when people actually cared about 3D action adventures more than today’s me-too first-person shooters and gang games, would have sold 360 systems by the bucketload. But the scary thing about beauty is that it, somehow, stops your brain from working at full speed. Where you should be asking questions – important questions like “Why is this game treating me like a moron?” or “Why does something that’s taken this long to produce still feel so half-finished?” – it’s easy just to sit back and think “ooh, doesn’t it just look gorgeous”. 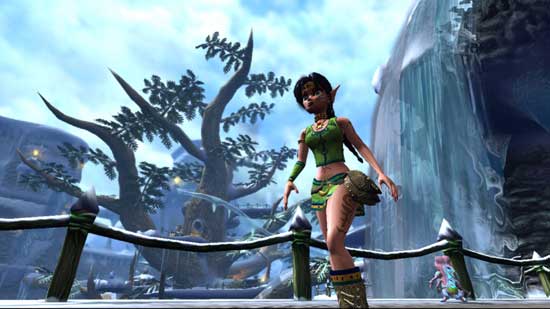 It’s not the characters that make this game, though they are intricately detailed, superbly animated and typical of Rare’s Nintendo-honed skills in this area. It’s the world they inhabit: one of lovely swaying grass and flowers, verdant trees with fuzzy squirrels racing up them, crystal streams, ponds and rushing waterfalls, gnarled rock faces and frosty mountain paths. It’s a world you want to get lost in; to explore and discover new areas of. There are scenes in a vine-covered temple, mist creeping around the ferns or the floor, or in a fire-lit, water-filled grotto that more clearly demonstrate the power of Microsoft’s new console than anything else I’ve yet seen. If the underlying design matched its beauty, this would be a world on a par with Zelda’s Hyrule or World of Warcraft’s Azeroth. The fact that it doesn’t is practically a tragedy. 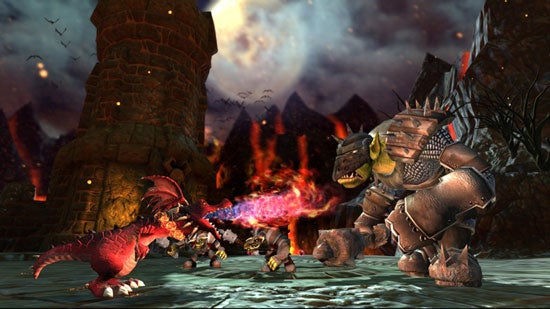 You see, Kameo is a triumph of atmospheric presentation. Everything, from the magic book used for the status screens and option menus to the in-game engine cut-scenes lures you further and further into its fairy-tale fantasy world. The music is exceptional, with strong themes that occasionally sweep you off your feet at the very same time as the gameplay is struggling to do so. The audio effects have been lovingly created and sound fantastic in surround sound. It’s a game that desperately wants to blow you away and, in audio-visual terms, effortlessly succeeds.


Yet in every other way, it’s only halfway there. 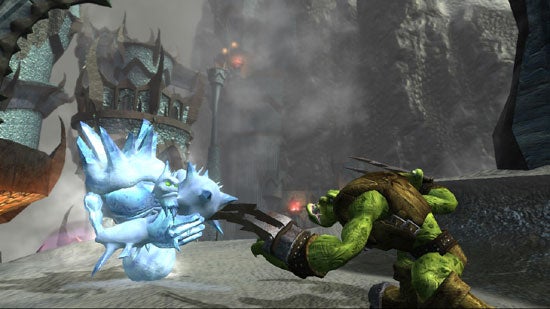 The game starts off well, with a castle assault sequence that would form the climax of many other games. While it’s perhaps not the most novice-friendly approach, it throws you straight into the main concept of the game: Kameo, a gossamer-winged Elven princess, transforms into various elemental forms, and by switching between the three you’re given to start with, you can conquer the various enemies and solve the game’s various puzzles. For example, Major Ruin – an oddball elephant/armadillo crossbreed – can roll up into a ball and power around levels, Metroid Prime-style. Your pugilistic plant form, PummelWeed, can slip under low gates and unleash a devastating uppercut. So, you’re just getting into the swing of things, when the game kicks into an aborted showdown. You lose your elemental forms, and it’s up to you to re-gather them, save your captured family, and stop a huge troll king from destroying the Enchanted Kingdom. Easy. 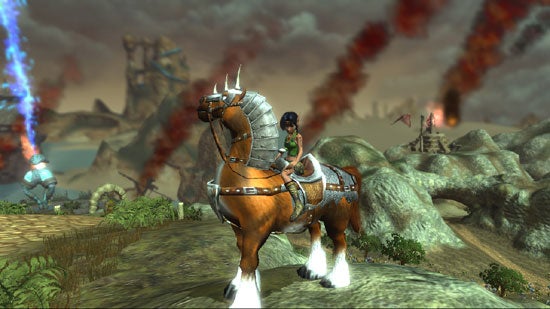 In other words, the game settles into a rather old-fashioned arcade adventure, where new forms lead to new areas leading to fights, puzzles and, eventually, boss battles leading to new forms and so on. Now, this isn’t necessarily a bad thing – it’s still the basic template for a Zelda, a Metroid or a Jak and Daxter, and it puts Kameo in a long and much-loved lineage that stretches back to the days of Wonderboy III. Up to a point, it’s fun here too. For the most part, your quest is entertaining. The combat takes place on a larger scale than in previous games of this ilk, and adding new forms gives you new ways to slay the fiendish trolls, whether with Ash’s flaming dragon breath or via Chilla’s nasty spike ‘em then throw ‘em approach. The trolls make for fun opponents, always finding new and slightly pitiful ways to take you on, and the sheer loveliness of the world and the desire to see new forms and new lands makes for an entertaining way to pass the time.

But the old greats gave you something else too: genuine discovery and intelligent experimentation. There were those sudden realisations that item A now allowed you to reach that door you couldn’t reach before, or that if you tried ability B, you might be able to make it through that barrier that impeded your progress early on. Kameo’s biggest problem is that it holds back on exploration, and gives you very little room to experiment. Instead, you do exactly what you have to, and if you don’t know what to do, then the game practically rams the answer down your throat. Any sensible player will switch off Kameo’s intrusive in-game help within the first hour, or suffer the misery of a thousand patronising hints. 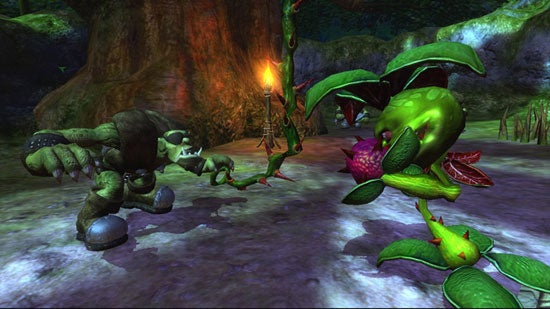 And you’re not really given much reason to explore. Zelda gives you a massive population of weirdos and oddballs and a host of strange little tasks you can do in the hope of gathering useful little bonus items. Metroid Prime gives you all the scanning and the secret item caches to discover. All Kameo dishes out are huts full of bugs and hundreds of people with only one not particularly interesting thing to say. As a result, no matter how beautiful this looks, Kameo never gives you the same sense of being in a real enchanted world. It’s as if Rare finished the drama, but never had time to flesh out the background scenery with life. Unlike Ocarina of Time, it all looks beautiful but feels oddly hollow. 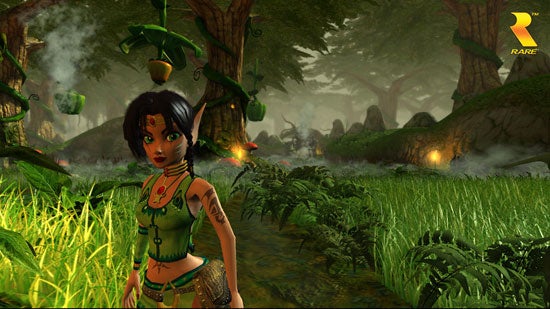 The game fares better when it comes to the big set-pieces; the battleground sections where you suddenly find yourself in warfare on a Return of the King kind of scale, but even here the appeal is superficial. It’s fun to help your troops fire cannons at an attacking Troll warship, but it still feels like something that’s been shoehorned in-between the main adventure, and superfluous to the main cut and thrust of the action. The sight of elves and trolls fighting on such a massive scale is amazing, the boom and rumble of cannon fire thrilling, so why did Rare not tie it in better to the main game? 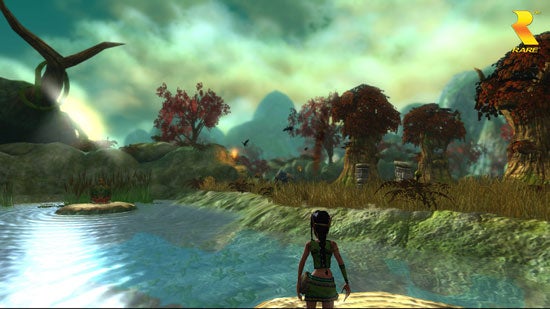 And what’s worse, there are times when the action grows tiresome or aggravating, particularly when it moves underwater. There is one boss battle with a Zelda-inspired electric tentacle creature that’s one of my all-time worst. Not only do you have to cannon exploding seed pods into it using Major Ruin’s charged roll attack; you then have to jump into the water and fire missiles at it in your aquatic form, Deep Blue. This wouldn’t be so bad if the controls and camera didn’t go completely up the swanny as soon as you dive in, making accurate attacks seem virtually impossible. Believe me: it’s the sort of thing that makes you want to collar the developers and SCREAM AT THEM UNTIL YOU ARE ABSOLUTELY BLUE IN THE FACE. Phew…, glad I got that off my chest. 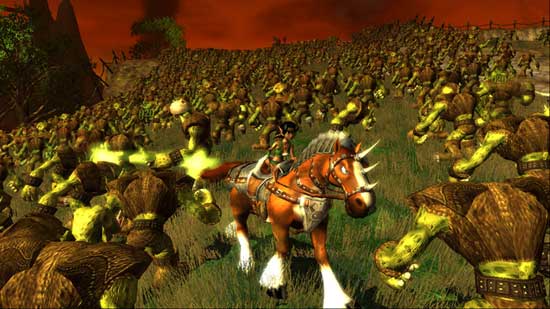 Glad, because we shouldn’t be too harsh. For much of the game, Kameo is engaging and – in case I haven’t mentioned this enough – it’s constantly astounding to look at. It’s just that you can’t help wishing some of the care so obviously lavished on the graphics, the sound and the presentation had been applied to the gameplay underneath. As it is, I can’t remember many games that so clearly display the potential of a new generation of hardware, without really doing anything to harness it to a great experience. And that, my friends, is a shame.


Without the incredible visuals, Kameo would be an adequate action adventure – more Spyro the Dragon than Ocarina of Time. It looks totally 2006, but the ideas are so 1999.