The combination of the upcoming Christmas buying period and a cold, hard recession seems to be having a remarkable impact on AV prices right now. For no sooner have we checked out a Sanyo PLV-Z5 HD Ready projector going for just £700 than we find a 47in LCD TV going for just £874. What’s more, this TV isn’t some dodgy grey import from some brand you’ve never heard of before; it’s JVC’s LT-47DV8BJ.


Even more remarkably, the 47DV8BJ isn’t just some uber-basic lump of plastic JVC has stuck together in a conscious bid to reel in the cash-strapped end of the market. In fact, it sits near the top of JVC’s range, with features aplenty. 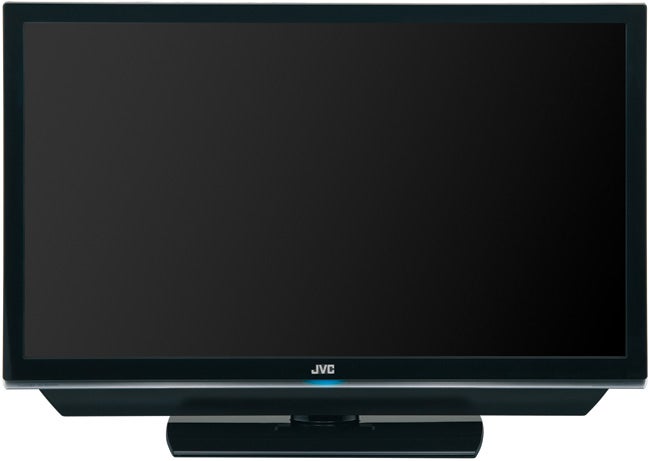 Its design, for instance, while not on a par with JVC’s Super Slim LT-42DS9 still boasts one of the slenderest screen frames we’ve seen round a 46/47in TV. Furthermore, this bezel is very attractively and robustly finished in glossy black, and offset delightfully by a silver sliver running along beneath the screen and a blue neon strip power light that lends the whole thing a tastefully retro flavour.


The screen’s connectivity is more than adequate for such an affordable big-screen monster too, including as it does three v1.3 HDMI inputs, a digital audio output and, crucially, a D-Sub PC port. We say ‘crucially’ here because we’ve found such computing jacks conspicuously absent on a few lower-spec JVCs in recent times. It’s a pity, though, that the D-Sub only supports 640 x 480 and 1,024 x 768 PC feeds. 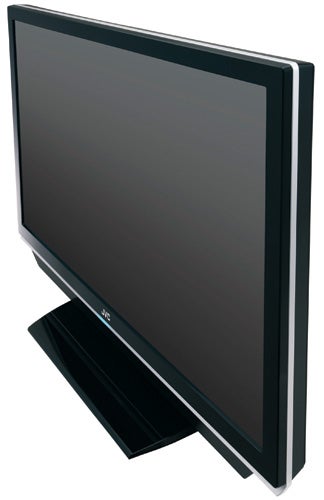 Elsewhere, the 47DV8 carries the Full HD pixel count we’re starting to expect as standard on large LCD TVs, and a 100Hz engine for doubling the image’s refresh rate. As usual with LCD technology, this 100Hz system is designed to reduce the extent to which moving objects blur and lose resolution as they pass across the screen.

There is one rather surprising and potentially demoralising weakness of the 47DV8’s image processing, however: its lack of support for the 1080p/24 signal format now output as the preferred option from the vast majority of Blu-ray players. Your only option if you want to play Blu-ray discs is to set your player to output 720p, 1080i, or 1080p/50/60Hz – none of which are ideal, for they all entail the player using its onboard processing to adjust the image from the 24fps setting the film was (most likely) encoded in.


Still, I have to say that this proved surprisingly little of a problem with both my relatively low-spec PS3 Blu-ray player and my relatively high-end – if aging – Sony BDP-S1E deck. With both units – but the latter, in particular, with its superior processing engine – the JVC presented unexpectedly clean and judder-free images from a 1080/60i output of ”Batman Begins” on Blu-ray.


This helps the set capitalise on another of its strengths, namely the ability to reproduce with good – if not quite startling – accuracy the minutiae of fine detail that makes HD pretty much the only thing we can bring ourselves to watch these days outside the confines of our test rooms. It’s worth adding, too, that the DynaPix engine is one of the better processors we’ve seen when it comes to upscaling standard definition to the screen’s Full HD pixel count, retaining more colour accuracy and introducing less video noise than many rivals. 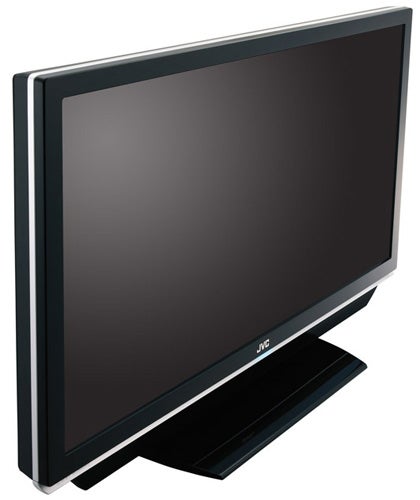 Another strength of the 47DV8 is its brightness and colour saturation. We’re accustomed, of course, to finding LCD TVs pumping out some pretty potent brightness levels – an ability which explains why LCD TVs often have an unfair advantage over plasma ones when compared head-to-head in a retail store environment. But even by LCD’s heady standards the 47DV8BJ’s pictures can look exceptionally intense and aggressive.


This is manna from heaven if you happen to be watching an animated film or TV show, or something gaudy like ”Sky News”. But since the aggression is achieved without seriously compromising the naturalism of subtler colours such as skin tones, it also helps normal films and TV shows look pleasingly dynamic.


Or that’s the case, at least, as long as the scenes you’re watching within those films and TV shows are predominantly bright. For unfortunately the 47DV8BJ exhibits an all-too-familiar failing during dark scenes (or even dark parts of predominantly bright shots): washed out black levels.


And so as Bruce Wayne’s family is killed in the alley outside the opera house, the black colours of their suits and the night sky behind them both look slightly grey and, as a result, lacking in texture detail. To some extent the greyness also reduces the image’s sense of depth, denying Christopher Nolan’s outstanding recreation of Gotham some of its ‘wow’ factor.

However, while there are certainly many plasma and even quite a number of LCD TVs now outgunning the 47DV8BJ on black level, I’m tempted to argue that the JVC’s deficiencies in this department aren’t actually bad enough to stop its pictures rating as very presentable indeed for its money.


Or rather, I would be tempted to make that argument in the 47DV8BJ’s defence were it not for the fact that the set also suffers with two other key black level weaknesses: a very limited viewing angle that sees dark areas greying over quite dramatically, and light leakage.

This latter phenomenon finds dark scenes afflicted by pools of yellowy light seeping across the outer edges of the picture, especially in the top right and bottom left corners. These pools aren’t as far-reaching or aggressive as with the recently reviewed Sony KDL-46W4500, but they’re still impossible to ignore – and therefore distracting – during any really dark scenes, such as the one in the prison cell near the start of ”Batman Begins” where Wayne is first approached by Henri Ducard.


I guess the extreme vibrancy of the 47DV8’s pictures counters the light seepage problem to some extent, especially if you’re likely to predominantly use the set for watching the usually bright material of daytime TV, or playing console games. But it’s hard to imagine that anyone bagging a 47in TV wouldn’t have at least some film-viewing ambitions, and for these sort of viewers the light pooling issues could become infuriating.


Making this flaw all the more frustrating is the 47DV8’s really excellent audio. The speakers protruding from the TV’s bottom edge are unfeasibly powerful considering how unassuming they look, pumping out a soundstage of exceptional size packed with detail, clarity, clear and believable voices, and even that rarest of flat TV commodities, bass.


In some ways the 47DV8 is a terrific LCD bargain, serving up a truly huge and at times spectacularly good image alongside some of the best sound we’ve heard at any price. But its lack of 1080p/24 support is bound to count against it among the AV cognoscenti, and the set’s light-pooling problems will likely at least occasionally trouble anyone, cognoscenti or otherwise.