In these times when you can pick up a 42in Panasonic plasma TV for barely £600, there’s no getting round the fact that at £1,999, JVC’s 42in LT-42WX70 looks scarily expensive. Especially coming from a brand usually found strutting its stuff at the relatively cheap end of the TV market. But the 42WX70 has quite an interesting tale to tell by way of justifying its price. Or rather, it has a series of interesting tales. 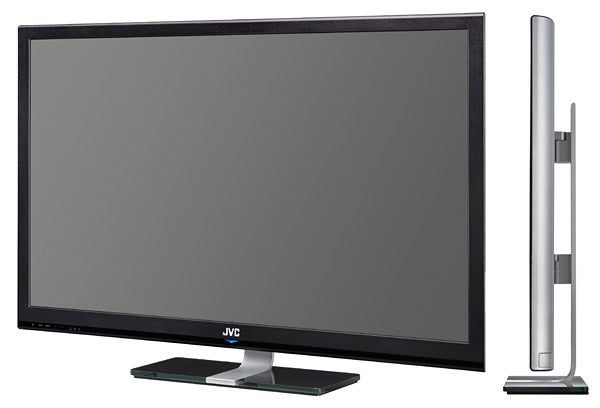 For starters, it looks very distinctive indeed. The bezel round the screen is exceptionally thin; barely an inch across, in fact. And the slenderness also applies to the TV’s rear end, which sticks out way less than that of your average LCD TV. The set’s finish also warrants a special mention, for its textured, almost leathery feel is a very pleasant change from all the shiny plastic we usually find today’s TVs clad in.


Also very distinctive is the desktop stand you can fasten the TV to, as the TV actually attaches via brackets to a single, central ‘pole’ rather than just sliding onto a base neck as usual. Even more strangely, the fastening brackets actually hold the TV quite a way forward from the main pole attachment – a design decision that initially seems a bit daft considering how counter it runs to the slenderness of the TV’s main chassis. 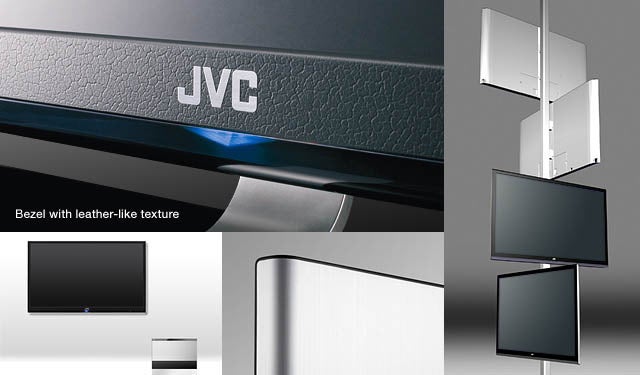 There is, however, method to this apparent madness. For the stand design makes it possible for JVC to slot something in between the screen and the attractive black and silver base. Quite what that something is, however, is to some extent up to you. For the most intriguing thing about the 42WX70 – which doesn’t have a tuner built in – is JVC’s plan to offer a series of modular external tuner/multimedia device boxes designed to fit into the gap beneath the screen, all offering different functionality combinations. 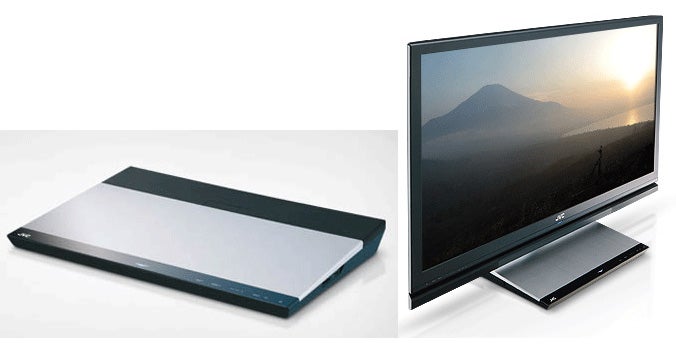 The first of these external boxes is the remarkably slender TU-CX100, offering HD digital terrestrial and analogue TV tuners. But JVC tells us it’s intending to launch later in the year an option containing a hard disk recorder and digital tuner, as well as an option containing a DVD player and a tuner. Blu-ray and Freesat options are also allegedly on JVC’s ‘to do’ list.


Giving you such choices over the exact specification of your 42WX70 seems like an eminently likeable idea to me – so long as JVC actually follows through on its promise to develop plenty of options, of course.

I should say right away that I couldn’t get hold of the CX100 tuner box JVC does for the 42WX70, and so have reviewed the screen using my own source gear (Sky HD box, Blu-ray player, Xbox 360/PS3, PC) connected via the three HDMIs and PC VGA port built into the screen. But then actually I suspect this will reflect the set-up situation/preference of many of our readers too, at least until some of JVC’s more exciting external tuner box options come through.

This latter fact means the TV should be able to show HD digital SLR photographs with unprecedented accuracy – as well as, we’d hope, delivering extra subtlety and dynamism with our favourite video sources. With this in mind, it’s reassuring to see that JVC provides a decent list of colour space options, as well as a seemingly reliable Auto mode if you’d rather not think about this key issue for yourself. It’s worth adding here, too, that every 42WX70 panel is calibrated to the 2.2 gamma setting before leaving the factory, ensuring – hopefully! – exactly the same colour accuracy on each and every panel that’s sold.


Further exploration of the onscreen menus reveals that the 42WX70 is remarkably flexible in all kinds of different ways – a reflection, no doubt, of both its sophistication and its desire to appeal to the custom installation market that’s likely to be so key to its success. 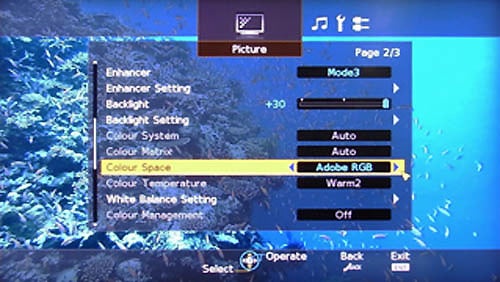 Among the most helpful of the reams of tweaks on offer are: a sophisticated colour management system; white balance fine tuning; gamma adjustment; two types of noise reduction; and the de rigueur Eco option, which adjusts the image settings to get the optimal power efficiency out of the screen.


There are some promising things going on with the TV’s processing, as well. For starters, the TV features the very latest version of JVC’s usually very credible DynaPix HD system, which works on a whole host of picture elements and is especially renowned for increasing the sharpness of standard definition sources.


Then there’s 100/120Hz Clear Motion Drive II processing, designed to reduce blur and judder when watching PAL and 24p sources. And finally there’s a Real Bit Driver – which you can deactivate if you wish – that applies 12-bit signal processing to each of the red, green and blue colour elements.

As I’d hoped, the sum total of all the effort JVC has put into the 42WX70’s pictures results in comfortably the best performance standards JVC has delivered from an LCD TV to date.


Particularly significant is the depth of black level the set can portray. JVC’s LCD TVs have traditionally struggled in this department, leaving dark scenes looking rather grey and flat. But the black levels attained by the 42WX70 are excellent, looking only marginally lighter than the jet black of the bezel.


What makes this all the more impressive is the fact that the new black level prowess is achieved without having to significantly reduce the image’s brightness, leaving images which contain a mix of bright and dark elements looking exceptionally dynamic. Indeed, even if you deactivate the set’s dynamic contrast function (which reduces brightness during dark scenes to boost black levels) the 42WX70’s black levels still look excellent. 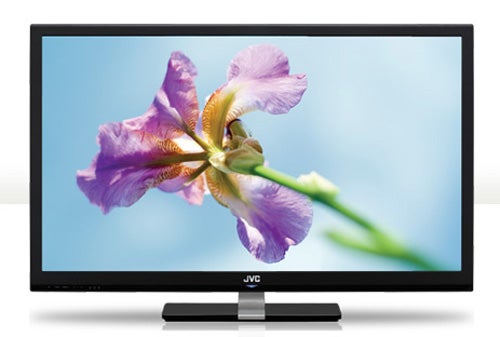 Also making a massive contribution to the image’s at times jaw-dropping dynamism is the screen’s much-feted colour response. There really does seem to be a greater degree of subtlety, blend finesse, and tonal expression on show via the 42WX70 than we’re accustomed to seeing on normal flat TVs – so much so that at times I felt this was enough to justify the 42WX70’s relatively inflated asking price.


I should clarify here, too, that while the set’s colour prowess is indeed at its most eloquent when viewing digital SLR stills (even my highly amateur snaps looked somehow more professional!), it also shines through clearly when watching a Blu-ray or playing an HD game.


As usual for a JVC DynaPix TV, meanwhile, the 42WX70 also excels when it comes to fine detail reproduction. The set’s ability to show even the tiniest of textures and details on a high quality Blu-ray is up there with the very best, while its ability to add sharpness and definition to standard definition sources is rivalled in my book only by Philips’ Pixel Perfect HD screens. 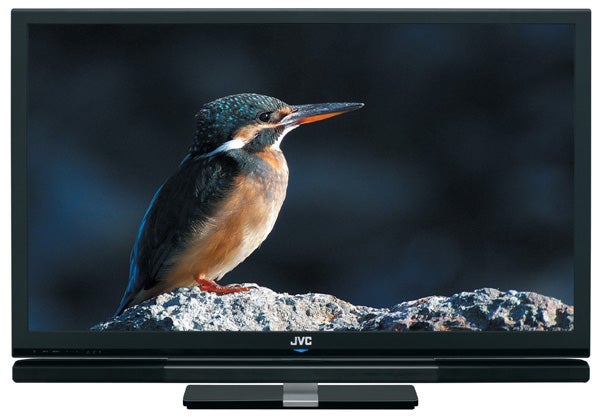 
Audio on the 42WX70 comes courtesy of an optional, detachable speaker ‘bar’ that can be fastened under the screen without compromising the space available for the external tuner modules. In some ways, this robustly-built bar works very nicely; there’s certainly an abundance of treble information, and you can get plenty of volume out of it without distortion kicking in. But there isn’t quite as much deep bass around as I’d hoped such an external speaker solution might have offered.


I should probably add that the speaker bar I was supplied with crackled occasionally, but I’m confident that this was just a problem specific to my early review sample.


Having thoroughly established itself in custom installation circles thanks to its D-ILA projectors, it makes perfect sense for JVC to follow those projectors up with the 42WX70. Especially when that TV combines some outstanding picture quality improvements and genuine innovations with – potentially, anyway – the sort of bespoke feature flexibility previously only found on megabucks offerings from the likes of B&O and Loewe. It’s just a damn shame that motion smearing issue stops us being able to give the 42WX70 a truly unreserved thumbs up.