JVC was actually the first brand to bring a genuinely ultra-thin – or to use JVC’s own parlance, Super Slim – LCD TV to the UK, in the shape of the well-received and decently successful LT-42DS9.


What’s more, as well as grabbing the headlines with its extreme slenderness, the 42DS9 bagged itself a European Green TV award from the European Imaging and Sound Association on account of its ‘outstandingly low energy consumption in both daylight and dark surroundings’; its use of ‘only a moderate quantity of materials’; its compliance with EU regulations on minimizing hazardous materials; its easy disassembly; and finally the fact that a standard ship container could hold at least 50 more 42DS9 boxes than standard 42in TVs.


Not surprisingly, JVC has tried to continue with these green credentials for its successor to the 42DS9, the 42DV1. But as we’ve seen with our previous couple of TV reviews, the amount of competition in the slim and ‘green’ arenas is growing fast right now. And so, for instance, the 42DV1’s packaging is no longer groundbreakingly small. The box around the Sony KDL-40WE5 is quite a bit slimmer, in fact.


Also, the 42DV1’s typical 225W power output, while respectable, is no longer particularly eye-catching when you think that the Sony KDL-40WE5 can get down as low as 88W, and typically runs at well under 200W. 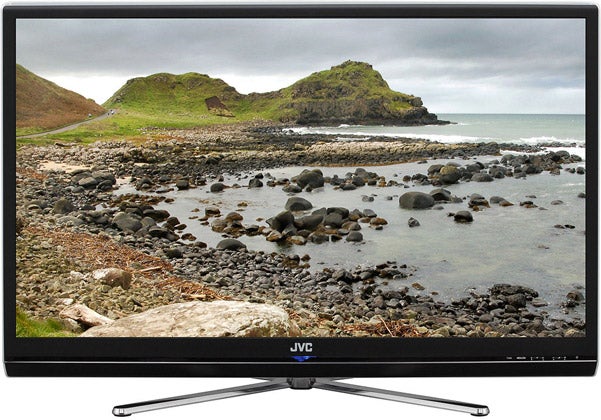 The 42DV1’s bodywork isn’t significantly slimmer than the 42DS9, either, and so it doesn’t stand out as much any more now that so many other new ultra-thin TVs are appearing – at least if you’re considering it from the perspective of the 69mm deep section in the centre of its rear that houses the set’s tuners. To be fair regarding this latter point, the 42DV1 is only around 30mm deep for around two-thirds of its depth, so it certainly looks exceedingly slim unless viewed from a completely side-on or rear view.


With neither its slenderness nor eco-friendliness helping the 42DV1 enjoy the same unique position that its 42DS9 predecessor did, it’s a relief to find JVC upping the 42DV1’s game in other potentially telling ways.


On the green front, for instance, the 42DV1 introduces a full mechanical power switch, which leaves the TV using apparently no power whatsoever when switched off. There’s also a Radio mode – which deactivates the screen if you’re tuned to a radio channel – as well as an initially interesting sounding Eco mode. But this latter feature ultimately turns out to be nothing more than another system that adjusts the image brightness in relation to the light levels in your room.


The 42DV1 also improves considerably in design terms over the 42DS9. For while I was initially suckered in by the 42DS9’s then-groundbreaking slimness, on reflection its finish felt a touch plasticky for comfort. The 42DV1’s bodywork feels more robust, despite the extreme slenderness of the bezel, and the move to an unusual non-gloss, textured black finish also works well, especially in the way it contrasts so strikingly with the (detachable) sweet little chrome-finished, cross-shaped desktop stand the TV ships with.

Another potentially key development for the 42DV1 is its use of a completely revamped dynamic backlight arrangement which, according to JVC’s own measurements, can produce a remarkable contrast ratio of 1,000,000:1.


While we’re used to seeing figures like that being bandied around by plasma and LED screens, I can’t recall seeing anything nearly so vast quoted by a ‘normal’ LCD TV. Even the mighty fine Sony 40WE5 only claimed 100,000:1. Here’s hoping that the 42DV1’s contrast ratio claims don’t just prove to be more evidence that you should never trust manufacturers’ quoted contrast ratios…


With a Full HD resolution, dedicated 24P Blu-ray film mode, 100Hz processing and USB 2.0 jack with MP3/JPEG playback support wrapping up a really healthy spec sheet, it’s ironic that the 42DV1 feature likely to cause the biggest stir is actually its most gimmicky one: the prosaically titled HandClap function.

For yes, with this TV it really is possible to turn the set on or off with three handclaps, or mute it with two handclaps. And by God, this feature really works, right out of the box, with no need for mucking about with calibration systems where the TV has to get used to the acoustic properties of your hand clapping!


To be honest, aside from testing the feature out for this review, I never actually felt inclined to use it even once during my time with the 42DV1. Especially since the TV throws up a highly distracting ‘Nix’ icon on the screen if it decides there’s too much noise around (including stuff like gunfire or an explosion in a film you’re watching) for the HandClap function to work. Having said all that, I’m sure I’d have succumbed to temptation and proudly shown the happy clappy feature off if I’d happened to have a dinner party while the TV was still set up!


Firing the 42DV1 into action quickly reveals that it’s a much better performer than its 42DS9 predecessor. Particularly pleasing is how much sharper moving images look. Panning around the dingy environments that make up the majority of under-rated Xbox 360 classic ”Dead Space”, for instance, results in far less blurring and edge lag than we experienced when playing games on the 42DS9.


And the same holds true for films and TV shows too, as the 42DV1 suffers pleasingly little with the classic LCD motion problems of judder and resolution loss. Even camera pans with movement within them hold up well.


To be fair, we’re not talking about levels of fluidity or motion clarity to rival that delivered by, for instance, Philips’ HD Natural Motion or Panasonic’s Intelligent Frame Creation systems. But the JVC’s efforts are nonetheless good enough to ensure that you’re seldom really distracted by motion issues – especially as the processing that achieves this doesn’t throw up any significant side effects.

The 42DV1 also excels, in typical JVC style, with its colour response. Objects seem unusually solid and three-dimensional on the set thanks to its winning combination of vibrant hues, a seemingly very expansive colour range, and perhaps best of all, some superb subtlety when it comes to rendering blends and colour shifts.


As usual with DynaPix HD TVs, the 42DV1 benefits from some terrific sharpness and detailing with high definition pictures. So much so, for instance, that you can actually make out drops of water on the black pipes that crash to the ground after Bond releases them from a crane during the ‘free running’ sequence in ”Casino Royale”.


Another massive strength of DynaPix HD is its ability to make standard definition pictures look good, adding lots of detail and sharpness without exaggerating noise – so long, at least, as you rein in the edge-harshening antics of the Super Digipure function. In fact, it’s my belief that only the Philips Perfect Pixel HD engine upscales standard definition pictures more successfully than JVC’s DynaPix HD engine. 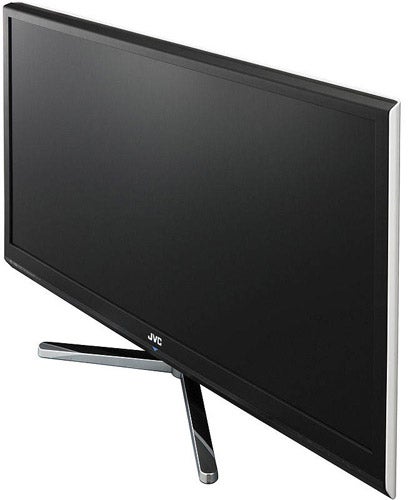 While the 42DV1’s pictures are excellent in most ways, they are ultimately let down a touch by a single problem: black levels.


With the set’s dynamic contrast function turned off, really dark scenes, such as the night-time sequences on the ”Pirates of the Caribbean” Blu-ray, look slightly cloudy in that familiar LCD kind of way. They also lack the formidable sense of depth and scale that’s so evident during bright, colourful scenes, thanks to the way the TV fails to render as much subtle shadow detail in dark areas as the best of its rivals. JVC’s 1,000,000:1 contrast ratio claims for the 42DV1 are now looking decidedly optimistic. It doesn’t help the black level situation, either, that the level of greyness in dark pictures grows massively if you’re forced to watch the set from much of an angle.


At this point I must stress that turning on the 42DV1’s Dynamic Contrast feature improves the set’s general black level response quite a bit; so much so that I personally would leave it on all the time. However, the feature also causes occasionally noticeable – and therefore distracting – ‘jumping’ of the image’s general brightness level.


Turning to the 42DV1’s audio, it’s certainly got plenty of raw power on its side, and so can pump out a good action movie soundtrack with extreme volume and aggression. Just be warned that the set doesn’t actually recognise its own limitations, and so the showy power can cause some pretty severe distortion if you try and push the volume level too far.


JVC’s latest stab at a super-slim TV is a big improvement over its 42DS9 predecessor; in spec, design and performance terms. Indeed, there are times when its pictures look really quite stunning. But in the end the fact that its black level response is only good rather than awesome leaves it a hair’s breadth from a TrustedReviews recommendation.