You’ve heard the hype, you’ve seen the pictures, you’ve probably thought ‘ooh, yes, one of those would look great in my living room’. But now at long last the first of the new generation of Super Slim TVs is finally here, in the oh-so-svelte shape of JVC’s LT-42DS9.


We used the words Super Slim back there deliberately, as this is the name JVC itself gives to its skinny TV technology. Other variations on the theme include Ultra Thin (Hitachi) and Super-Thin Profile (Panasonic). But no matter what you call them, skinny TVs all ultimately stack up the same. Which is to say they all reduce the size of their rear ends to either fit even more snugly against your wall than they would otherwise, or to elicit coos of admiration from anyone who beholds one sat on a desktop stand. 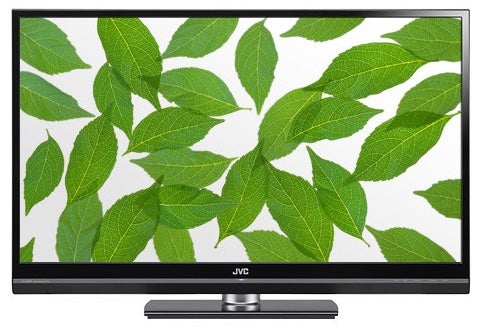 Which brings us right away to a philosophical point about the 42DS9 before we even get anywhere near to testing its performance: does being ‘Super Slim’ really matter all that much?


Those of you seduced by the clever marketing images of slender screens will probably all be shouting ‘of course it matters! We want TVs that take up as little of our living rooms as possible!’ But let’s put some numbers on this, shall we?


Right. At its thinnest, the 42DS9 is just 34mm deep. With ‘normal’ flat TVs tending to come in at around 90mm deep, you don’t have to be a mathematical genius to figure out the 42DS9 is barely a third as deep as a standard flat TV.


However, that difference only really amounts to 6cm. Get a ruler out, look at 6cm, then imagine if that is really going to make a substantial difference to your living room life. Somehow we doubt it. 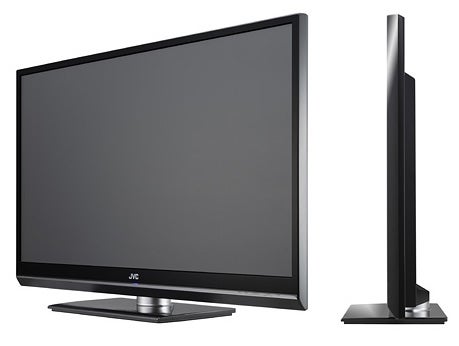 What’s more, while the 42DS9 is only 34mm deep across around two-thirds of its width, there’s a section in the mid-rear where the addition of a tuner module makes the rear end extend to 74mm – only a couple of centimetres less than a normal flat TV.


Still, while the 42DS9 might not be the genuinely life-changing phenomenon the Super Slim marketeers might want you to imagine it, there’s no avoiding the fact that it helps the TV look both really striking and really, really attractive. Especially as the slenderness around the back is matched by an unusually slim gloss black bezel that makes an impact even when you’re sat right in front of the set, unaware of the skinny rear end. Heaven only knows where JVC has hidden the speakers on this TV…


What’s more, while design purists might rue that chunky tuner addition, it makes the TV a hell of a lot more practical to your average man in the street than totally skinny models – like Hitachi’s imminent Ultra Thin range – that don’t come with tuners.

The fact that JVC seems more set on making Super Slim a real mass market option right from the off rather than pursuing a high-brow premium market is also reflected in its price; the sub £1k cost we’ve found online really doesn’t seem a lot to pay for a cutting edge design incorporating some brand new technology.


That technology is essentially a completely redesigned backlight unit and power supply substrate. Regarding the backlight unit, the JVC lab boys have managed to optimise the light-diffusing plates and light-reflection sheets that make up a key part of an LCD TV’s chassis, as well as improving their overall composition. The result is that the set should deliver uniform light diffusion at all corners and edges without adding more CCFL tubes to the design – as well as ensuring that the picture remains bright enough to compete with current fatter flat boys. 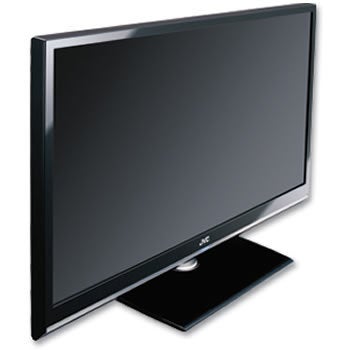 For power, as well as redesigning the supply into a slimmer shape, JVC has direct mounted it on the LCD backlight unit and integrated a fanless heat dissipation system.


Clever though all this sounds, though, it does inevitably raise concerns about whether the shift to slim has compromised JVC’s LCD picture quality in any way. We’ll get into that presently, but first we need to point out that its Super Slim design is certainly not the 42DS9’s only claim to fame.


For starters it has a very handy three HDMI inputs, all built to the key v1.3 specification and all capable of receiving Blu-ray’s 1080p/24 format. Plus there’s the de rigueur component video input, and everything else you’d expect any self-respecting TV to offer bar a D-Sub PC input. This lack of a dedicated PC connection is rather surprising in this day and age, but thankfully it doesn’t mean you can’t connect a computer at all; you can use one of the HDMIs, provided you’ve set your PC to a resolution of 720×576, 1280×720, or 1920×1080.


One other little limitation of the 42DS9’s connections worth mentioning is the fact that although the HDMIs can handle v1.3’s Lip-synch and Deep Color capabilities, they can’t also take the x.v. colour system.

As well as the full HD resolution we alluded to a moment ago, the 42DS9’s other key specifications include a more than respectable looking 7500:1 contrast ratio claim (achieved via the inevitable dynamic backlight system) and the inclusion of the latest generation of JVC’s usually reliable DynaPix HD image processing engine.


It’s nice to find, too, that you can tinker around with some of the DynaPix elements, such as the MPEG noise reduction and Colour Management utilities.


It doesn’t take long in the company of the 42DS9’s pictures to realise that the introduction of slim technology doesn’t appear to have had a negative impact on JVC’s LCD picture quality at all. In fact, the 42DS9 is in many ways JVC’s finest flat TV performer to date. 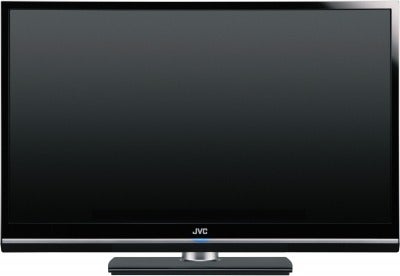 The set’s black level response in particular is in a different league to anything JVC has managed before. The darkness of the night skies in the new Chinatown ”Call of Duty 4” map, for instance, actually looks deep and convincing rather than grey and flat. As a result you don’t find yourself getting picked off as often by enemies you couldn’t actually see because they were hidden behind some nasty LCD ‘veil’. Naturally the same strength helps the set deliver the goods very nicely with dark film scenes such as those in the projection room as Charlie watches the film of his old friend describing ”The Italian Job” during Sky’s recent HD premiere of this Michael Caine classic.


Another string to the 42DS9’s bow during HD viewing is the sharpness and detail on show. All the remarkable detailing present in ”Call of Duty 4’s” scenery is present and correct, while particularly sharp Blu-ray discs such as ”Harry Potter And The Order of the Phoenix” look full of texture and HD clarity.


Colours, meanwhile, are fulsomely saturated when required, doing justice – if that’s the word – to the rather odd cartoon-like palette on show at times during ”Rainbow Six Vegas 2” on the Xbox 360, or the glorious floating LED ‘billboards’ in ”Bladerunner”. There’s plenty of the customary ‘full HD’ subtlety in colour blends too, and the tonal range available during HD viewing is such that skin tones look impressively differentiated but also very natural


It’s great to note, too, that neither the colour tone nor the black level drop off significantly until you watch from a really quite extreme angle, and brightness levels really do seem uniform over every inch of the screen.


Turning to standard definition, for the most part this looks good too, with DynaPix HD doing a better job than many rival engines of scaling digital tuner fare up to the set’s full HD resolution.


For starters, motion doesn’t look particularly great on the 42DS9. There’s no 100Hz element built into the DynaPix engine, and so it’s no great surprise to find fast-moving objects or camera pans suffering with small smeary trails behind them. These were particularly evident during our Rainbow Six sessions, as turning round at speed caused smear trails as wide as a centimetre to emerge from any well-defined colour edge.


Thankfully, though, this smearing problem is not also joined to any serious extent by LCD’s tendency to lose resolution as objects pass across the screen. Also, the smearing issue intriguingly disappears almost completely while watching 1080p/24 Blu-ray feeds, leaving the 42DS9 delivering pictures that are among the very best we’ve seen from the HD disc format. 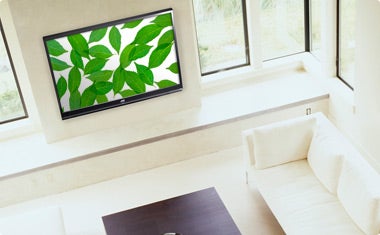 Our final issues with the 42DS9’s pictures concern some minor shimmering noise over some areas of fine detail, and the way digital tuner standard def skin tones look a bit noisy without MPEG noise suppression active, but rather plasticky if you turn the NR on.


Turning to the 42DS9’s sound, even though it doesn’t appear to have any speakers of its own, they ARE there, and they actually pack quite a punch. JVC’s MaxxBass system in particular earns its corn by delivering a really surprising amount of bass for an LCD of any sort, never mind a Super Slim one.


What’s more, the bass doesn’t overwhelm the mid-range at any point, so that vocals are always clear and believable. There’s an excellent amount of detail in the soundstage too; for instance, during ”The Italian Job” there’s a scene where Michael Caine is telling one of his crew off for worrying about his asthma, and you can hear a low-level voice on a radio in the background that many TVs don’t pick up at all.


There’s a fractionally ‘electronic’ feel to some treble information if I had to be really picky, but overall the audio results are impressive, and again give the lie to one of the performance concerns we’d had about slim TV technology.


The 42DS9 is not perfect, there’s no denying that. And we’re not convinced that the current manufacturing obsession with shaving a few centimetres off the depth of their already flat TVs is really that important. But what we can say with absolutely certainty is that the 42DS9 is a very good flat TV – especially with HD – that throws ground-breaking looks into the bargain without costing anywhere near as much as we’d expected.