Crossing TrustedReviews’ path, after we found ourselves enjoying JVC’s super slim LT-42DS9 LCD TV, is the brand’s LT-42DA8 which does not, on the surface at least, seem to have very much going for it.


For starters, it’s not particularly thin. The rear end sticks out the regulation 100mm-plus, actually making it feel quite stocky by today’s LCD standards.


It’s not particularly pretty either; the combination of a glossy black screen frame and outer silver edge looks a bit untidy to my eyes, with the plasticky nature of the silver edge not helping.


Things go from bland to worse when you turn your attentions to the TV’s connections. Disappointment number one is the fact that there are only two HDMIs when we’re increasingly expecting to find three these days. Then there’s the fact that these HDMIs are only v1.2 in nature, meaning there’s no compatibility with the burgeoning Deep Color format. 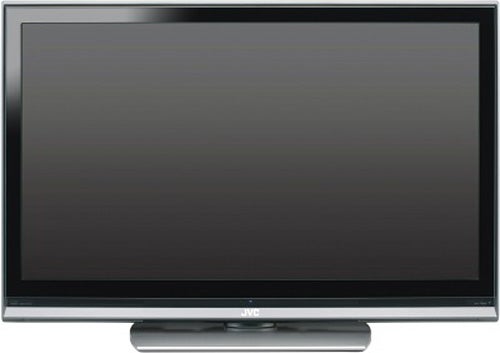 Even more alarming, the HDMIs offer no 1080p support. And we’re not just talking about 1080p/24fps Blu-ray support here; there’s actually no support for any 1080p formats whatsoever. Try playing 1080p/50 or 60Hz into the 42DA8 from a suitably specified DVD upscaler and all you’ll get is a nice blank screen. Yikes.


To be fair, JVC does have an explanation for this, namely that the DynaPix picture processing built into the TV has its own 1080i to 1080p conversion system. But I have a sneaky feeling many people reading this review would prefer it if the JVC merely took in a pure 1080p source rather than ‘creating’ one using internal processing – processing which, inevitably, will not be completely perfect.


After that brief digression, I’m afraid we have to return to the subject of connection deficiencies. For almost uniquely in today’s flat TV marketplace, the set sports no D-Sub PC input. You should be able to get a PC signal via the HDMIs, with VGA and XVGA supported. But this is still a very limited level of PC support, and hardly makes me feel any better about the shortage of HDMIs.


One more absentee from the usual set of TV connections is a four-pin S-Video port. This is actually not a big deal to most people these days, but there may still be a few people with last-gen games consoles or camcorders who may feel its loss.

If you’re paying attention you may have spotted on the previous page that I quoted the 42DA8’s native resolution as 1,366 x 768. Which means, of course, that it’s merely an HD Ready TV rather than a Full HD one like the vast majority of 42in TVs these days.


With a fairly uninspiring native contrast ratio of 1000:1 also failing to set the world alight, really the only positives we can take from our first impressions of the 42DA8 are a black level correction system, noise reduction routines, the implementation of two Oblique Cone Speakers to try and up the set’s sound quality, and last but not least, the DynaPix video processing we mentioned in passing earlier. 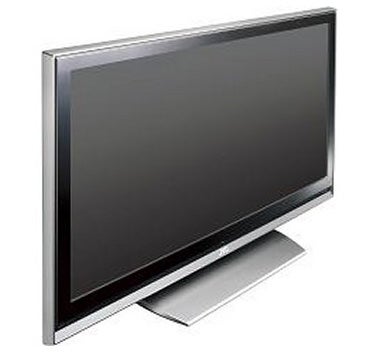 At this point it’s worth pausing for a moment to ponder whether the 42DA8’s £799 price makes much of a difference to the rather negative feelings I’m getting about it so far. But you know, while £799 certainly isn’t a lot to pay for a 42in TV, it’s impossible to ignore the fact that Panasonic’s superb, nicely specified (though not Full HD) 42PX80 42in plasma TV can be had for as much as £200 less if you know where to look online. Also Samsung’s Full HD, four-HDMI, high-performance, specified-to-the-hilt LE40A656 can also now be found for south of £800.


Two core problems upset the apple cart. First and worst, its black levels just aren’t good enough by today’s standards. As Bruce Willis follows the psycho to his next victims’ home in the Blu-ray of ”Unbreakable”, the amount of greyness in the night-time backdrop makes it look as if a sea mist has rolled in over Philadelphia. The effect of this greyness is to leave dark scenes looking flat, unnaturally coloured, and generally rather straining to watch.


The sort of greying over of dark areas I’m describing is, of course, an all-too-familiar LCD problem. But it’s been a while since I saw a large LCD screen as badly afflicted by it as this JVC.

Sadly the 42DA8 also falls prey to another vintage LCD problem: motion blur. Panning around the landscape as far as the stupidly limited camera will let you in PS3 flop ”Haze”, for instance, results in some quite obvious trails behind sharp edges, while the occasional moments of fast action lose resolution.


In the 42DA8’s favour is the exceptional vitality and aggression of its colours, which really explode of the screen. Its HD pictures also look superbly sharp when they’re relatively static (and thus unaffected by the set’s motion blur issue), and there’s very little trouble from such video nasties as dot crawl, grain and colour bloom. 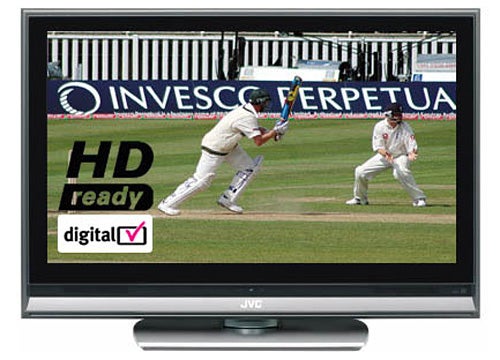 The 42DA8’s standard definition pictures generally deserve praise too, as DynaPix does a better job than most processing engines of upscaling standard def sources to fit the screen’s HD Ready resolution. Noticeable extra detailing and sharpness gets added without the sort of video noise side effects so common on many rival models.


The final entry in the 42DA8’s plus column is its sound. Those Oblique Cone speakers really do perform a cut above the flat TV norm, producing slightly more dynamic range, soundstage width, clarity and sheer volume than many of their peers.


Although hardly expensive for a flat 42in TV, the 42DA8 just doesn’t manage to sparkle in any department. Fundamentally average.