Not everyone wants or needs an all-singing, all-dancing 4K TV. Your budget may preclude something fancy (although 4K sets are getting cheaper all the time), or more likely you’re seeking a screen for second-room duties. Either way, your eyes may well alight on this Full HD 42-incher from JVC.

The LT-42C550 doesn’t have a smart portal offering connected streaming services, and in terms of picture processing it’s only marginally less glamorous than a night out at the Sugar Hut in Brentford. But if you’re after a 1080p TV for a small lounge, bedroom of gaming den, it might well fit the bill.

The design of this 42-inch TV borders on utilitarian. The screen has a thin, gloss-black plastic bezel, and is supported by a wireframe pedestal stand. The panel drops snugly onto two upright prongs and is quickly screwed in place.

Connectivity is surprisingly good. There are three HDMI inputs, one of which supports ARC (Audio Return Channel); and all comply with HDMI CEC control. There’s also legacy SCART and analogue component/composite video and stereo audio, a CI slot , a VGA PC input, digital audio output and USB. There’s also Ethernet – but no Wi-Fi. 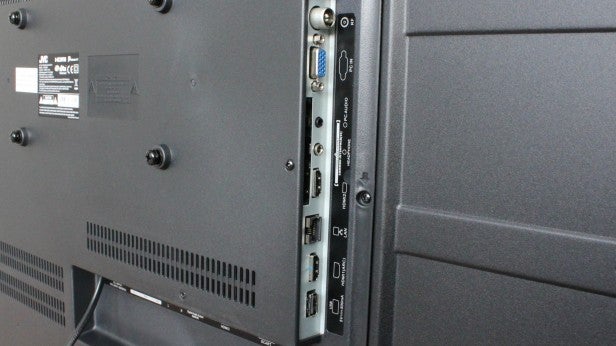 The Ethernet provision isn’t to support a smart portal, because there isn’t one. It’s actually mandated by the Freeview HD specification, and once connected to the internet, opens the door to any IP channels delivered as part of the Freeview bouquet – you’ll find them at the dark end of the programme guide.

This set may have fewer features than a botoxed soap star, but there are some niceties to be found. A PVR function allows you to time-shift to a connected USB hard drive. The maximum drive size supported is quoted at 1TB – which equates to quite a lot of HD TV.

Remember, though, since there’s only a single tuner, you can’t record and watch a different channel at the same time. While this clearly isn’t a replacement for Sky Q, you could find it useful if you want to add recording functionality to a second a room. 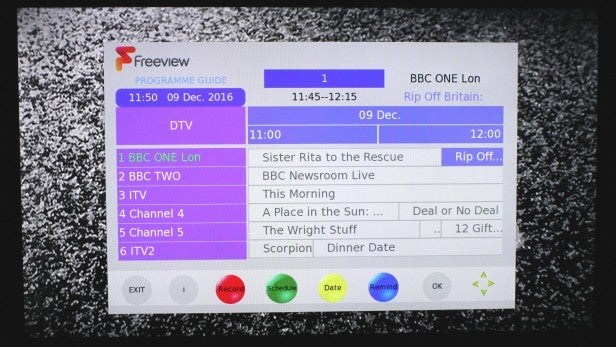 Conversely, there’s a definite lag when moving about the main menus – particularly the programme guide. It’s a bit embarrassing trying to select Sky News and getting an adult channel pop up instead.

Setup is short and sweet; a quick sweep and you’re pretty much done. The main menu consists of a simple graphical overlay for channel selection, picture and sound settings – plus some other stuff that barely warrants a graphic.

The programme guide is a basic Now & Next offering that sits in the centre of the screen.

The supplied remote is a full-size IR clicker that sits comfortably in the hand. For a TV with so few features, it makes a grand job of filling space with important sounding buttons.

This TV is built around a basic 60Hz 1080p panel, with little in the way of imaging science. HD pictures look tight and sharp, from DVB tuner to Blu-ray – heck, you can even get away with DVDs on a screen this small – but there are plenty of caveats. 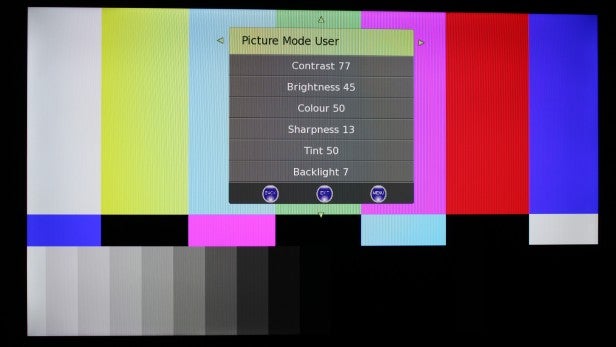 Picture presets comprise Standard, Movie, Dynamic and User. These can be toggled directly from the remote by using the P.Mode button on the remote, so there’s no need to delve through additional menus.

The only adjustable parameter for the main presets is the backlight, everything else is greyed out. In truth, there’s little difference between any of them. If you want to tweak, the User setting is your only option. From here you can alter all the usual parameters: contrast, brightness, colour, sharpness.

Unfortunately, every picture preset suffers from excessive edge enhancement. This results in awful white contours that look horribly unnatural. And since you can’t modify the Sharpness setting, you’re stuck with them. Thankfully, that User setting allows you to clean up the mess. Setting sharpness to around 13 removes overshoots and ringing. 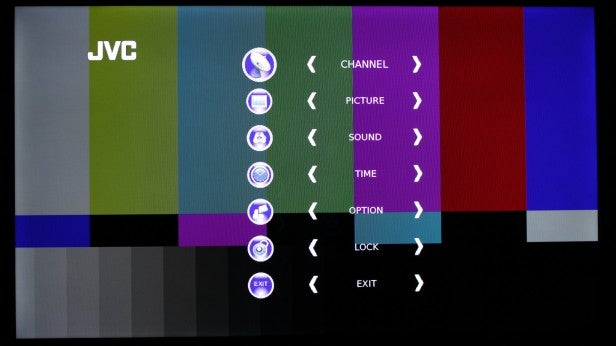 There are no image interpolation modes to maintain motion clarity. The screen loses motion detail at about 600 lines when subjectively measured at 6.5ppf (pixels per frame), which means blur is often visible. Horizontal pans can be a little stuttery.

The set doesn’t really deliver a convincing black either, which means dark images look washed out. You can ramp up the contrast and tone down the brightness for more punch, but you’ll crush shadow detail. Still, on this calibre of screen I think the trade-off is worthwhile.

It’s worth reiterating that this is an entry-level panel, and all these traits merely reflect that. Backlight uniformity is typical for an edge-lit screen at this price. Screen brightness is rated at 270 nits.

Audio performance is poor. Even DTS TruSurround processing can’t save it. The presentation is largely monophonic, and you’ll not want to listen with the volume cranked up to its 8W maximum. 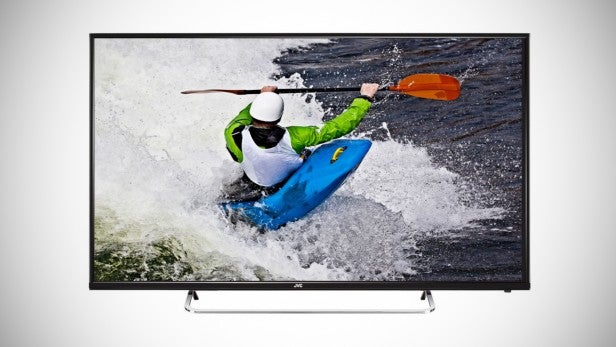 If you need an HD widescreen that presents pictures without frill or fancy, then why not? It’s clean-cut and at 42 inches, the LT-42C550 is small enough to disguise many imaging nasties. For the most part, it looks presentable with a range of content sources.

It may not set performance benchmarks, but overall the JVC LT-42C550 can be considered a workmanlike Full HD TV. For second-room duties, and for £249, you might be tempted to forgive its shortcomings.