The first TV we looked at from JVC’s new LCD range, the 26DA8BJ, didn’t exactly set the world on fire. It wasn’t truly bad; just arguably average. Though come to think of it, given how competitive the LCD market has become over the last six months, arguably average might as well be ‘bad’…


At any rate, the only real encouragement we could gain from the 26DA8BJ was the fact that its ‘DA8′ designation marked it out as belonging to the bottom of JVC’s new LCD tree, leaving room for improvements in models higher up the scale. Models like the LT-37DG8 we’re looking at today. 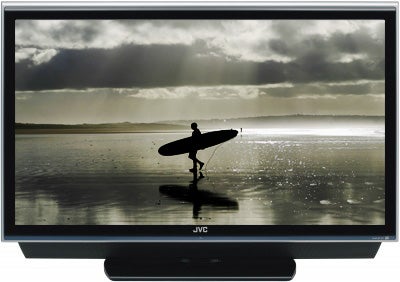 The 37DG8 sits one rung higher up the ladder than the DA8s, with two key extra performance-enhancing strings to its bow. First and potentially most important is its use of DynaPix Plus image processing rather than the ‘mere’ DynaPix found on the DA8. And second, audio should benefit from the introduction of a MaxxBass system which, as its name suggests, boosts the handling of bass in the sound mix.


The 37DG8 also looks nicer than the DA8s, dismissing the cheaper model’s slightly plasticky silvery strip along the bottom in favour of a tastier black ‘wedge’ that juts down to hold the speakers. This is one budget-priced TV with a far from budget build quality.


Connections don’t mark as much of a ‘step up’ as we’d have ideally liked, though. There are twin HDMIs, which is fair enough, but neither of these can take 1080p inputs, regardless of whether you introduce them in their 50/60Hz or 24fps incarnations. However, the most glaring omission is a D-Sub PC port – a rare shortcoming in this day and age that takes on particular significance when you learn that the HDMIs aren’t designed for PC use either. So if you’re looking for a screen to do double duties as a TV and computer monitor, this is not the one for you.

The 37DG8’s key screen specifications are unremarkable. The native resolution comes in at a standard HD Ready 1,366 x 768, while the contrast ratio is a pretty disappointing 1,000:1. Not helping on the contrast front is the fact that the 37DG8 doesn’t have any dynamic contrast system, whereby the backlight can reduce its output automatically during dark scenes to deliver deeper black levels. Quite unusual for a big-screen from an established brand.


We guess there’s a potential upside to this, namely that we don’t have to worry about sudden brightness ‘jumps’ as can happen with some unsophisticated dynamic contrast systems. But without such a system you have to wonder if the set can really deliver the sort of black levels needed to do a good movie proud. 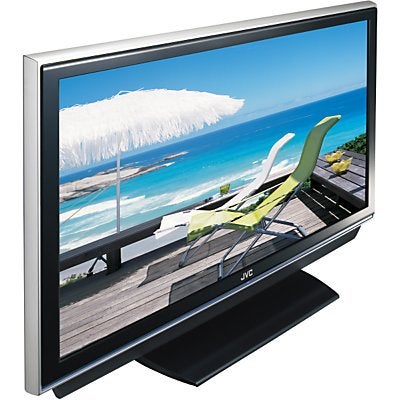 Shifting our attention to the 37DG8’s image processing, the DynaPix incarnation used on the 37DG8 is not JVC’s ‘top of the line’ version. That system is called DynaPix HD and is only found on sets further up the JVC range. What we have here is DynaPix Plus, which sports less processing power and lacks some contrast-improving elements compared with the HD version. Hmm. Let’s hope the reduction in processing power doesn’t mean that this ‘light’ version of DynaPix actually does more harm than good.


Other more minor bits and bobs include the ubiquitous built-in digital tuner, a digital audio output for passing on multichannel audio tracks received via the HDMIs, and a colour management tool.


In action the 37DG8BJ turns out to be no classic, but is a heck of a lot better than we’d expected given how remarkably affordable it is for a 37in LCD TV. Getting the ball rolling in fine style is the sharpness of HD pictures. The exceptional texturing that makes Gears of War on the Xbox 360 still look a cut above the competition graphically is all immaculately rendered with pin-sharp precision. And sharp HD movie transfers such as Pirates of the Caribbean on Blu-ray look as crisp and textured here as on many 37in LCD TVs costing considerably more.

Even more surprising, given the 37DG8’s lowly price, is how relatively little the picture softens up when there’s a lot of movement to handle. So when the actors’ faces move around in their cockpits during the opening space battle of Star Wars Episode III: The Revenge of the Sith (recorded in HD from Sky), they are less afflicted by LCD’s common resolution loss over moving objects than we might expect. Especially considering that the 37DG8 – inevitably for its money – doesn’t have any kind of 100Hz processing engine to help keep motion blur to a minimum.


Other good stuff includes some really vibrant colour portrayal, which works a treat for rich, bright sequences like the Bahamas section of Casino Royale on Blu-ray; some surprisingly assured handling of standard definition sources compared to most similarly priced rivals; and sonics that are considerably more powerful than those of the DA8. Admittedly we’ve heard even better sound from one or two previous JVC models, but we guess the real top audio stuff is being saved for JVC’s premium LCD sets (which we’ll hopefully be looking at soon). 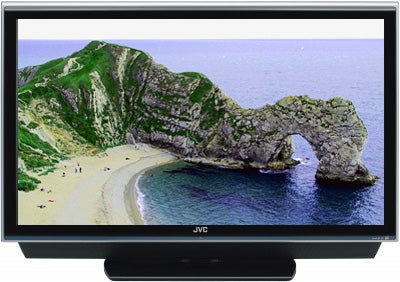 Good though it is, the 37DG8 certainly isn’t perfect. Probably the most glaring problem – and one practically all budget models struggle with to some extent – is rather shallow black levels. This renders night-time scenes, such as those that populate Die Hard 4.0 on DVD, with such regularity that they can look slightly flat and grey. Perhaps as a consequence of this, the 37DG8’s colours occasionally look a little unnatural too, especially where skin tones during dark scenes are concerned.


There are certainly better LCD TVs out there than the 37DG8, especially when we’re talking black levels. JVC really ought to have rolled out some sort of dynamic contrast system right across its range by now, rather than just saving it for the expensive models. However, you can’t reach any conclusion about the 37DG8 without taking into account its extremely aggressive price. And actually, when set against similarly affordable rivals, JVC’s efforts suddenly seem pretty impressive.