Considering that JVC launched the first super slim LCD TV into the UK, the still-available 42DS9, I have to say that the brand’s new 32in LT-32DR1BJ is a bit disappointing aesthetically.


For a start, at 104mm deep without the stand attached, it’s certainly not superslim. This won’t trouble anyone wanting to shove their TV into a corner, I guess, where a few extra inches on a set’s bottom won’t make much odds. But it could definitely be a turn off for wall-hangers, or tech fashionistas keen on a TV with full 180-degree appeal.


The fascia tries hard, meanwhile, thanks to the really extreme level of gloss delivered by the black bezel. But it’s still ultimately just another fairly straightforward black rectangle when all’s said and done.


Things become a little more intriguing with the 32DR1BJ’s connections. Three v1.3 HDMIs get the ball rolling, with able support from an optical digital audio output, a USB 2.0 input (capable of playing MP3 and JPEG files), and a D-SUB PC port. This latter socket is particularly welcome, since JVC has had a naughty tendency to miss such computer connectors off its previous TVs. 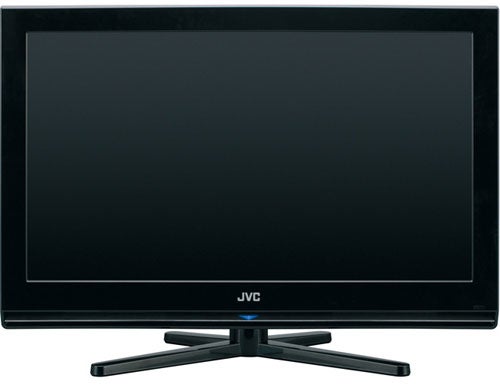 The screen’s key specifications are more than respectable too, as a promising 40,000:1 claimed contrast ratio joins up with a Full HD resolution that I really hadn’t expected to get for the 32DR1BJ’s money.


Also boding well is the presence on the 32DR1BJ of JVC’s always respectable DynaPix HD video processor, with its focus on boosting detail in standard definition sources, cleaner scaling of sources to the set’s full HD pixel count, and motion-adaptive interlaced-to-progressive conversion.


Then there’s a 12-bit signal generator dubbed the Real Bit Driver, there to help the set deliver colour blends with more finesse than the 10-bit systems commonly found on relatively inexpensive TVs.


The set’s excruciatingly bland and also bizarrely sluggish onscreen menus contain a few more items of interest. There’s the option, for instance, to turn off the Dynamic Backlight system – though personally I didn’t feel that dark scenes looked unstable enough with the feature active to warrant deactivating it.

You can also manually adjust the ‘core’ backlight level to suit your tastes, turn on or off an automated colour management system, adjust the level of JVC’s contrast-boosting Super Digipure processing, and finally switch on or off an MPEG noise reduction system.


While the 32DR1BJ might sound as if it’s got a lot going on for a sub-£600 32in LCD TV, though, it’s noticeable that there’s no high-level motion processing like 100Hz or frame insertion. And unfortunately the absence of such motion-aiding features quickly makes its presence felt once you settle down to see what the TV can do. As the players ran round the pitch during the goal-laden tussle between Aston Villa and Everton over the weekend, for instance, they invariably looked slightly soft and short of detail. 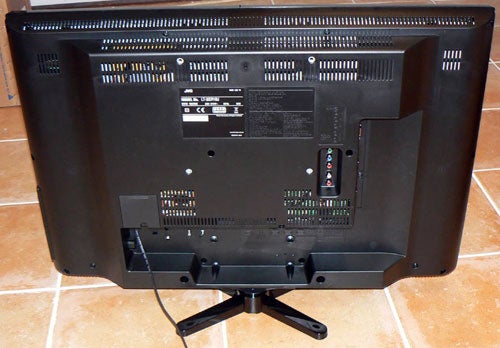 During camera pans across detailed environments, too, fine details tend to go AWOL to a degree not seen with any decent 100Hz TVs. A loss of resolution with motion isn’t the 32DR1BJ’s only issue with motion either, for watching a 1080p movie from Blu-ray also showed up more judder than I was comfortable with.


Turning to the decent number of things the 32DR1BJ’s pictures actually get right, they’re impressively sharp and detailed when not having to contend with much motion. This means the set portrays more of the glories of a good HD source – finer textures, sharper edges, a greater sense of depth etc – than the vast majority of other 32in TVs we’ve seen. Even other Full HD ones.


Impressively, the DynaPix HD processing also helps standard definition pictures look unusually crisp by Full HD LCD TV standards. This is achieved, moreover, without the 32DR1 exaggerating any noise that might be in a standard definition source signal. In fact, the lack of noise apparent during both high and standard definition viewing meant that I never once felt seriously inclined to try out the provided MPEG noise reduction system.

Another strength of the 32DR1BJ’s pictures is their colour response. For the set achieves a really likeable combination of aggressively full saturations and surprising tonal expressiveness and subtlety. This helps pictures spring to life and hold your attention much more readily than is common on affordable 32in TVs.


It helps, too, that the rich colours just described are given a strong counterpoint by a black level response from the 32DR1BJ that’s far, far better than I’d expected to see. JVC has traditionally struggled to get past the grey clouding issue common with LCD sources, yet here, while it hasn’t been completely, miraculously obliterated overnight, it’s kept in check sufficiently well that it only becomes a concern – and a minor one at that – during the very darkest of scenes. 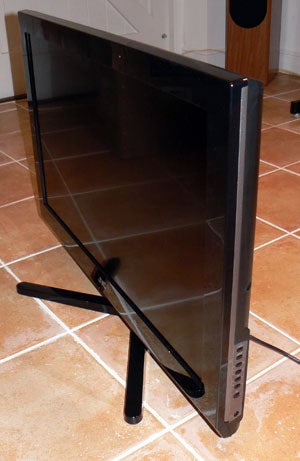 I guess if I was to be picky I would like to see a little more shadow detail in the picture’s darkest areas, for sometimes they can look a little hollow and one-dimensional versus the strikingly three-dimensional appearance of bright image elements.


The sound accompanying the 32DR1BJ’s pictures is, well, a bit odd, frankly. The speakers are to some extent very powerful, able to pump out far more raw volume than the majority of other small to mid-sized LCD TVs. The problem is, this focus on power shows no understanding of or care for other key audio elements whatsoever. And so the extreme volumes you can achieve leave treble information sounding painfully exposed and harsh, bass muddy and prone to causing the speakers to distort, and vocals frequently overwhelmed by the general messiness of the rest of the soundstage.


This wouldn’t all be so bad if the TV provided more finesse and control over the set’s volume, but the set seems to go from too quiet to too loud bizarrely quickly as you press up and down on the volume control.


It’s great to see JVC making real strides forward when it comes to black level response – especially as this new improvement joins forces with JVC’s traditional strengths when it comes to resolution. When it’s at its best, the 32DR1BJ really can deliver some pretty spectacular pictures.


It’s just a shame there are signs of motion blur and judder together with a rather cheap-sounding audio system to keep our feet on the ground.