There’s no easy way to break this to you, so we might as well just get straight to the point: you’re going to have to get your head round yet another new TV technology. Yes, we know it’s already hard keeping up with all the CRT, LCD, plasma, DLP and rear projection stuff. But seriously: painful though it might be, you really owe it to yourself to get acquainted with HD-ILA technology, as represented by JVC’s new HD-56ZR7J.


The first thing you need to know about HD-ILA is that it’s a projection technology, which translates in TV terms to a rear projection set. And a big one at that; the 56ZR7J’s screen is, as its name implies, a ‘healthy’ 56in. Mind you, even this screen acreage pales next to that of this set’s bigger brother, the 70in HD-70ZR7.


From these dimensions it seems clear that JVC is nothing if not confident about what HD-ILA is capable of. And when you look at how it works, that confidence seems well founded.


HD-ILA is essentially a renamed (you’ve got to get HD in there somewhere these days, after all!) version of D-ILA, a JVC-developed technology based on the more widely known Liquid Crystal on Silicon (LcoS) optical system used in a handful of UK front projectors. 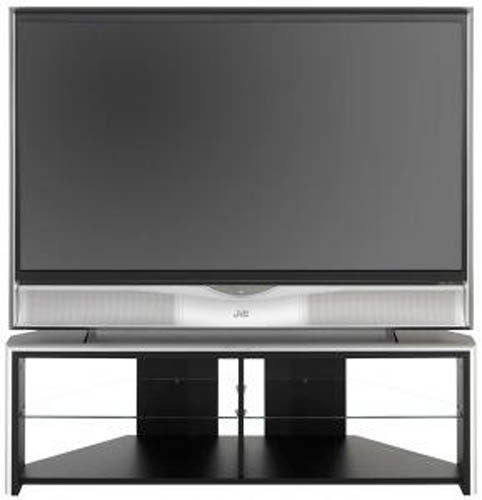 What HD-ILA then additionally brings to the LCOS party is enhanced pixel density – something which has the potential to greatly reduce the distracting ‘grid’ effect, where your eye makes out the individual pixels in a projected picture.


When you consider the HD-ILA also completely does away with those DLP rear projection problems of the so-called ‘rainbow effect’ (stripes of pure colour in your peripheral vision) and fizzy noise over motion, it begins to seem surprising that nobody has done an LCOS-style TV before. Unless, of course, we uncover some nasty secret further down the line…

Connections on the 56ZR7J are acceptable rather than outstanding, in that while they include HDMI, component and PC jacks, there’s only one of each when we’re increasingly starting to look for at least two HDMIs as standard.


You might be surprised to learn that this set doesn’t carry a built-in digital tuner. But to be fair this is actually by no means unexpected, since cutting edge products like this usually start life in R&D with a distinctly international flavour, and thus struggle to integrate such a region-specific feature as a Freeview tuner in their first generation.


Probably chief among the features the 56ZR7J does have is Dynapix video processing; a proprietary JVC system designed to improve motion, greatly enhance sharpness and detail levels (especially with standard definition), reduce noise, and automatically improve contrast based on an ongoing and automatic assessment of the picture content.

The great fear with the first products to use any new technology, of course, is simply that they turn out to be rubbish. So it comes as a huge relief to find that the 56ZR7J is so phenomenally accomplished in nearly every way that you’d swear JVC had been making HD-ILA TVs for years.


The first thing you notice as you instinctively reach for a pair of shades is how phenomenally bright the picture is. There’s simply not another rear projection TV out there that can touch the 56ZR7J in this key respect. Needless to say this has a particularly dramatic effect on the cartoonish joys of an HD Xbox 360 picture.


The 56ZR7J is also peerless in the rear pro world when it comes to video artefacts – or rather, the lack of them. We’d hoped the HD-ILA technology would get rid of the nasties associated with rival DLP and LCD systems, but nothing could have prepared us for the sheer impact of seeing 56in pictures unaffected – during HD viewing, at least – by noise of practically any sort, be it grain, visible pixel structure, colour noise or even smearing or buzzing over motion. In fact, until we saw this JVC in action we hadn’t realised just how noisy the pictures on our reference DLP rear pro set really are!

The almost complete lack of noise lets you forge a fantastically direct connection with what you’re watching, which surely has to be a key starting point for any truly satisfying viewing experience.


Making this general lack of noise all the more remarkable is the fact that the 56ZR7J’s picture is almost frighteningly sharp. In fact, we’d go so far as to say the screen renders every almost infinitesimal detail of an HD picture in a way that we’ve simply not seen before on a rear projection TV. If you think we’re exaggerating, just stick an HD showing of Planet Earth on and see how long it takes for your jaw to raise itself back off the floor.


A final plus of the 56ZR7J’s pictures are its colours, which are both stunningly vibrant and solid but also almost perfectly natural in tone – something that few rival DLP and especially LCD rear pro TVs can claim.

Remarkably it’s not just the 56ZR7J’s pictures that impress either, as its speakers also produce truly excellent sonics. Bass levels are rich and deep enough to leave most flat TVs for dead, the soundstage is dispersed far and wide without becoming incoherent, stupid volumes can be reached before speaker distortion sets in, speech always sounds clear and credible, and treble effects are pristine without becoming harsh.


We’re not saying the 56ZR7J performs perfectly, though. Black levels, for instance, can leave really dark movie scenes looking a touch greyed over. Also, while HD pictures for the most part look breathtaking, standard definition ones can look slightly messy, presumably due to shortcomings with the set’s image scaling engine.


Although we finished the main review on a down-note, we must say that it would really have been little short of miraculous if JVC had made HD-ILA rear projection perfect at the first time of asking. And anyway, the problems described are nowhere near serious enough to deter us from the heartfelt opinion that, as technological debuts go, the 56ZR7J is an absolute doozy.