Where once you might have asked why anyone would spend more than a tenner on the things, headphones have become quite the fashion item – many are willing top spend top dollar these days. Walk around the streets of any UK city and you’re likely to see many a pair of £200-odd cans. Not everyone can afford that sort of money, though, and for those people JVC has come up with the Xtreme Xpolsives range. Headphones like the JVC HAM5X Xtreme Xplosives Around Ear borrow a few design cues from the Beats by Dr. Dre pairs for an urban look on a tight budget.

Design and comfort
As the name suggests, the JVC HAM5X are over-ears headphones, encasing your whole earlobes with faux-leather pads. A quick glance has probably told you this already, but these are big, chunky headphones that will make a smart-dressed fellow either look ridiculous or as though they’re trying a little too hard on the irony front. 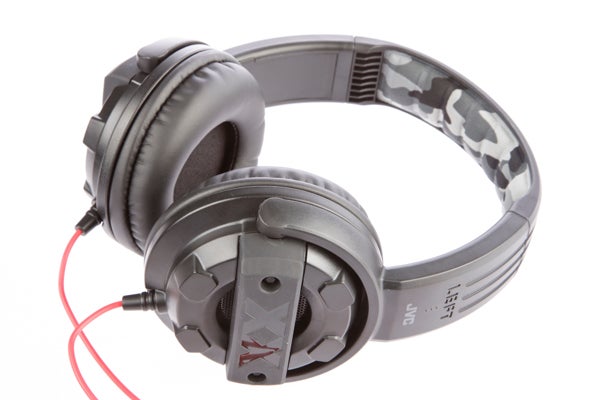 At the £30-odd price, it’s no surprise that the construction is devoid of premium materials. The main frame is textured black plastic, the earcups are lined with conspicuously fake-feeling “leather” and the headband padding is topped with camouflage-print neoprene.

As you’d hope from a design so self-consciously industrial-looking, the HAM5X feel sturdy, but they don’t feel luxurious. They’re not hugely comfortable, either. Using large pads, pressure is distributed fairly evenly on the sides of your head – and there are no fit problems – but we found the ridged headband sits all-too noticeably on the crown. The curvature of the padding isn’t ergonomic enough, and as such they never “disappear” in the way lightweight, comfy headphones do. 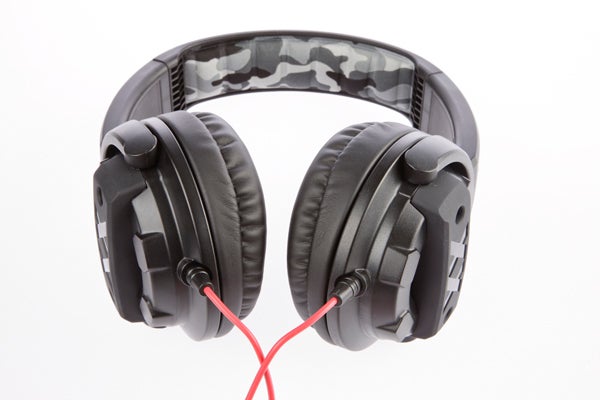 The earcup padding doesn’t help, with a slightly tacky plasticy finish that serves as another reminder the things are on your bonce. However, they are pretty lightweight and don’t need carefully re-arranging on your ears as many on-ears pairs do. Comfort it just ok.

A few design elements of the JVC HAM5X headphones are a little deceptive. It looks initially as though the cables that lodge into each earcup may be removable – they’re not – and as an urban street headphone, the semi open-back style is quite unusual. 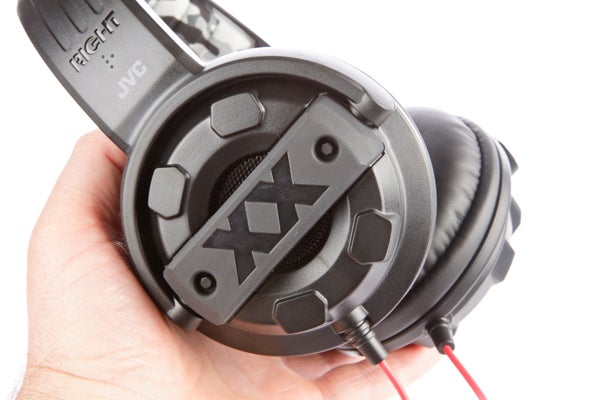 The big “XX-branded” plastic bars on the back of each cup hide permeable grills covering the large 50mm drivers. Leaving open air between the driver and the outside world makes these headphones leak sound much more than most. Noise isolation is reasonable, but if you up the volume on the train, there’s a good chance the person next to you may end up peeved. For a day-to-day commuter headphone, we strongly recommend closed-back headphones or IEM earphones. 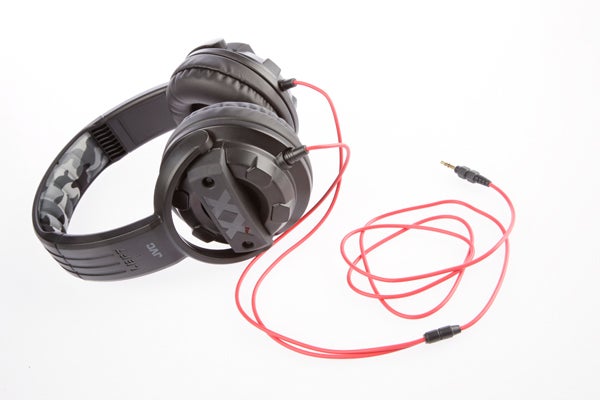 Accessories
The JVC HAM5X Xtreme Xplosives Around Ear are basic headphones, with little need for accessories. The 1.2m cable ends in a 3.5mm jack, and is home to neither handsfree kit nor remote control. There’s no case supplied, but at the low price it’s not something to grumble about for too long.

With “Xtreme Xplosives” part of their name, there’s no mistaking what the JVC HAM5X headphones are about. These are bass-centric headphones that trade in some balance and top-end sparkle for a powerful low-end – which rarely wins headphones points from us.

However, after the branding and loud look instilled had us hoping the worst, we were pleasantly surprised by the sound. It’s not perfect, but it’s not terrible either. 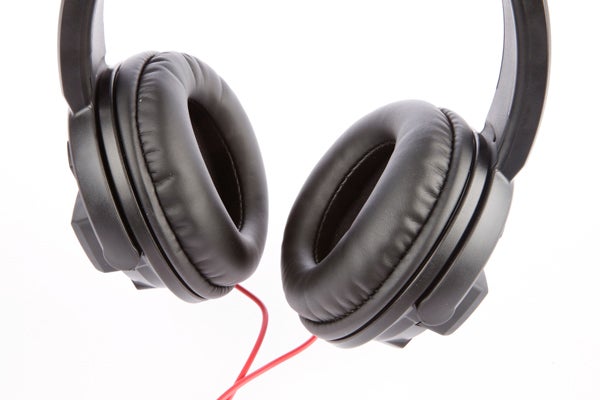 The low-end focus is kept in check in-part by the open-back design, which is what lends an airy, wide quality to many pairs of top-end headphones. You don’t get that airiness here, but there’s a strong stereo image that helps to counteract the clogging effect of a low-end modus operandi.

Bass is given a disproportionate share of the spotlight, but it’s quite deep and powerful – without the fug-like upper-bass swell that made us turn against the Beats On-ear last year.  The low-end is not entirely well-handled, though. It’s a little languorous in its response at times, lacking the toned punch of more expensive sets. However, we expect this effect – and the slight boom factor here – would be much worse if the JVC HAM5X had entirely closed backs. 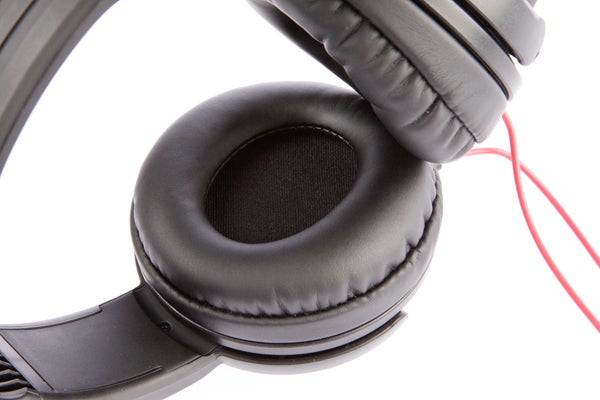 At the price, these are some of the better-sounding bass-crazy headphones you can get, but they do lack the treble sparkle and insight you’ll find from a more neutral-sounding or brighter set. They can leave vocals sounding a little flat and unloved, tending to favour other every other member of the band over the singer, so to speak.

The JVC are consequently pretty good at making aggressive instrumental music sound exciting, but the unbalanced bass just becomes too evident once you get the singer on-stage. It’s much a question of tuning, though, because with some clever equalisation you can get these headphones sounding really very good indeed for the money – thanks to the open-back quality that you can’t simple replicate in a similar manner with a closed set. Neutralise the bass swell and balance is restored, bringing a much more satisfying listen for the audio enthusiast. 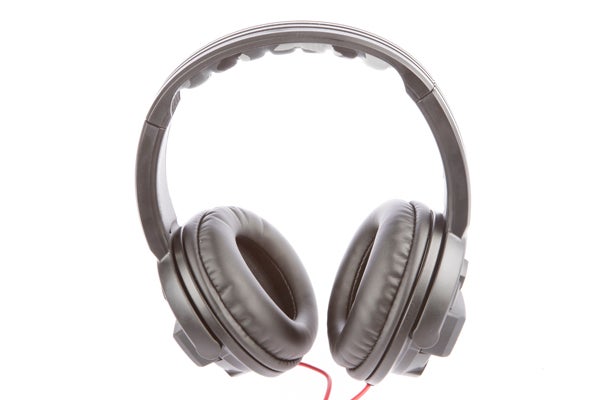 Value
Without such fiddling, though, the value of the JVC HAM5X is a little more questionable. The sound isn’t well balanced, they’re not all that comfortable, their look is a taste we’re unlikely to acquire and the open-back style means they’re not perfectly suited to their main use – listening out on the street. 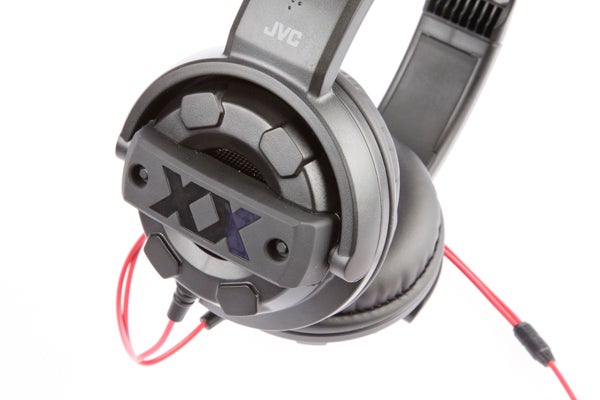 The JVC HAM5X Xtreme Xplosives Around Ear headphones desperately want to make an impact. A hyper-aggressive look and the bassy sound have their eyes on the young, “urban” crowd, but they limit their appeal. These headphones sound much better once the unbalanced bass is tamed with EQ. And while the semi-open design has some major sound benefits, it limits their effectiveness on the train or bus.