At £89, that’s a lot. Great comfort and smart looks only add to the appeal.

However, the noise cancellation isn’t very effective and causes some digital noise that can be distracting in quiet environments. 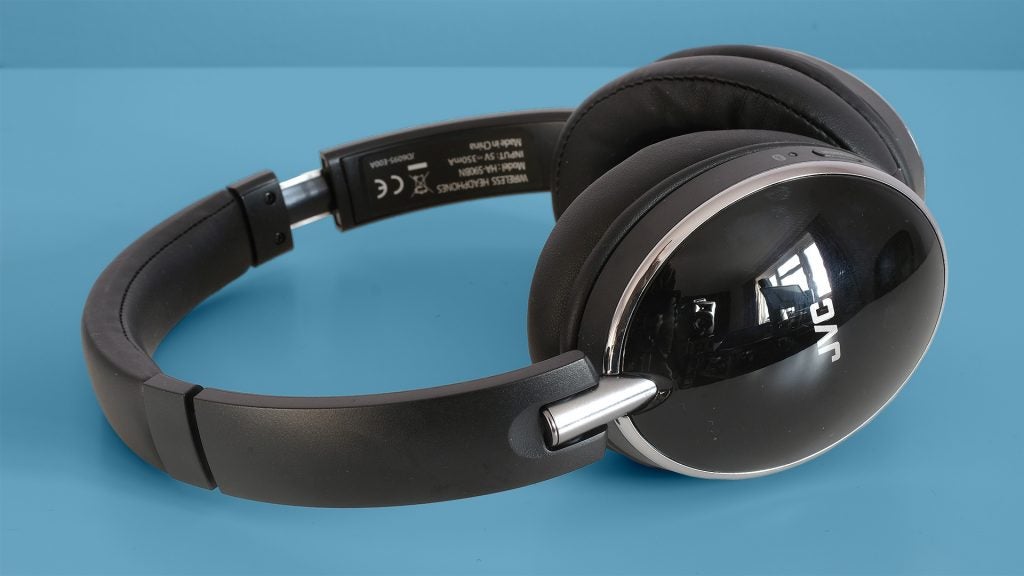 The JVC HA-S90BN are a budget alternative to the Bose QuietComfort 35. At a third of the price, they have obvious appeal.

These headphones look good, too. They have full-size cups, but are fairly low-profile. The headband is slim, and the cups don’t extend too far out – something that can often make bigger units look a bit silly.

The JVC HA-S90BN’s entire outer shell is plastic, though; even the silver trim and the cylinder that connects cup to headband.

As such, they don’t feel like £200-plus headphones; but they’ll easily fool onlookers. 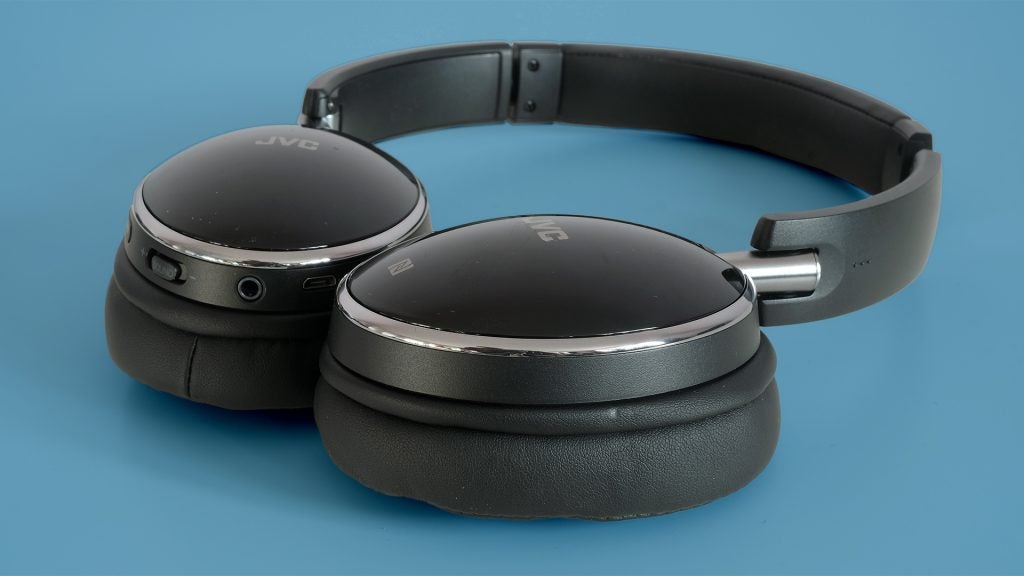 The JVC HA-S90BN’s cups have a curved, ultra-glossy finish that’s as reflective as glass. It sounds deliberately eye-catching, but since the colour beneath this glossy plastic is plain black, they hang onto a low-key sensibility that appeals.

Put them on and, initially, it’s clear that build quality isn’t quite as good as the £150-plus alternatives from which JVC wants to lure you away. The plastic creaks slightly and the hinged cups don’t offer much resistance. Unless you carefully alter the headband, the pressure distribution of the cups can seem a little “off” too. 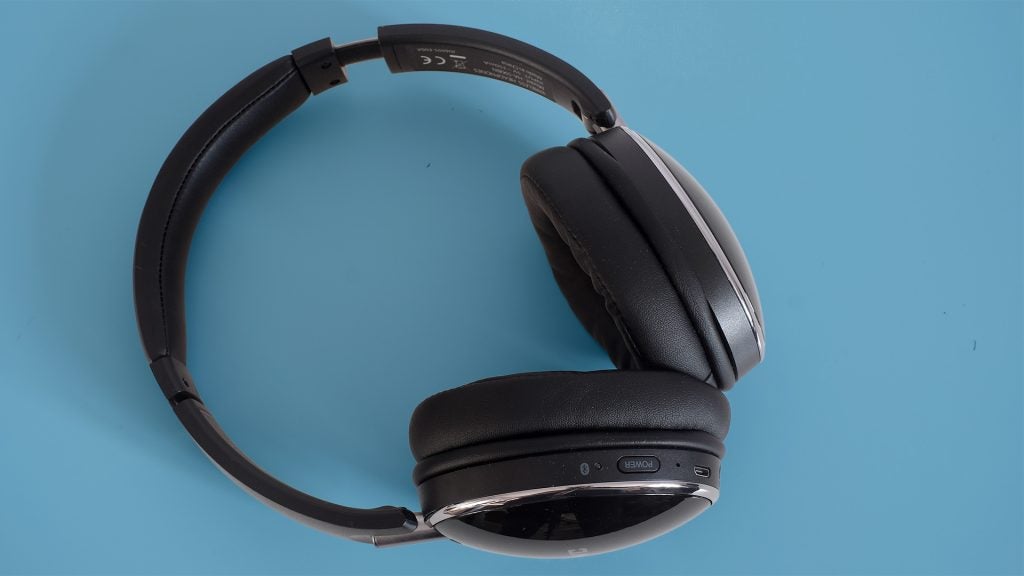 However, for long-term listening I think these are some of the more comfortable headphones you’ll find at the price. The cup padding is thick and soft. I’ve worn the JVC HA-S90BN for most of a day without any discomfort.

The cups also fold into the headband for easier storage in a bag. You get a lightly padded fabric case in the box, which is particularly handy here since the glossy are likely to pick up scratches more readily than some.

For a £90 headphone, the JVC HA-S90BN do quite a lot. You can pair them to an Android device using NFC, for example. Just hold your phone up to the NFC logo on the left cup and they’ll attempt to pair.

Bluetooth reliability is excellent, too. I haven’t experienced a single blip during many hours of testing.

This, and the battery life, suggests the JVC HA-S90BN use an up-to-date Bluetooth chipset. The longevity of Bluetooth headphones has radically improved over the past 12 months, and these JVCs last for up to 27 hours using only the Bluetooth. 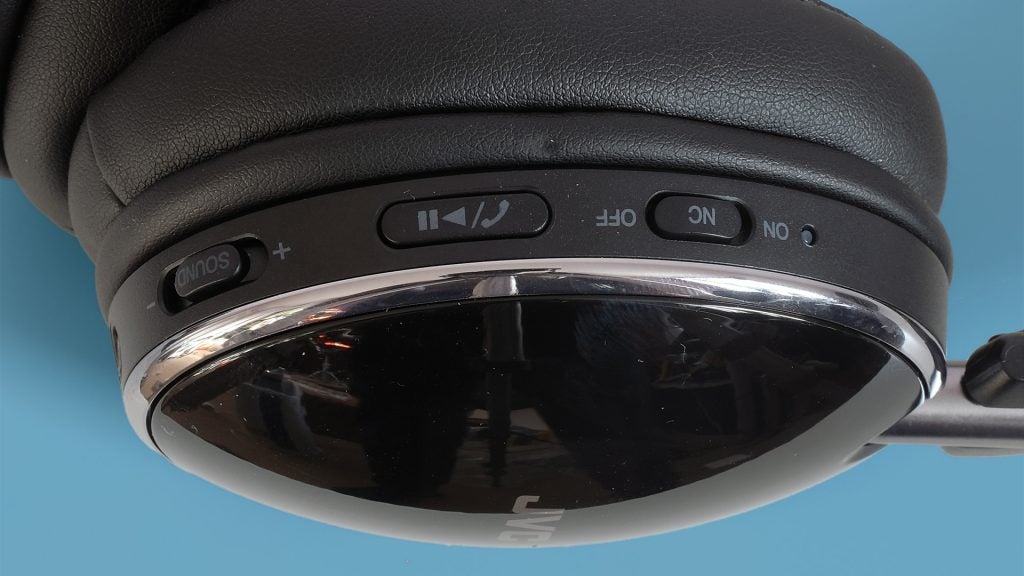 Switch on the active noise cancellation and that drops to 16 hours. Or you can use noise cancelation on its own for a mammoth 35 hours. There’s a dedicated switch for ANC, and you don’t need to fully power the JVC HA-S90BN to use the feature.

The efficacy of the noise cancellation is nowhere near that offered by Sony and Bose headphones, though. It appears to reduce outside noise in a relatively narrow frequency band, predominantly the low-mid and upper-bass registers.

In a café, the JVC HA-S90BN did get rid of some of the street noise from outside, but they failed to touch the real low-frequency sound of a passing bus’ engine. As some of the higher-frequency noise is stripped out, it actually makes what remains appear more prominent. 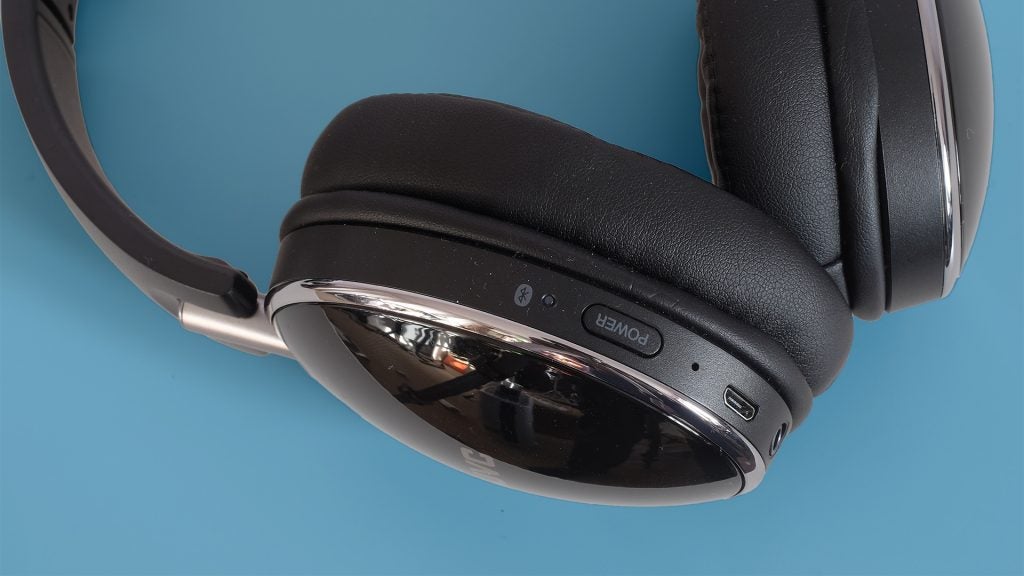 Switching on noise cancelling does improve sound quality a little, firming up the mid-range. However, it also skews the channel balance a little, making centrally positioned vocal sound appear as though it’s panned just slightly to the left.

In addition, using Bluetooth seems to create a very small amount of digital noise – and the ANC highlights it. It’s only audible in the right cup, and I find it distracting when listening to podcasts or music with quieter passages.

After highlighting these issues to JVC, we were kindly sent another pair. But the problems remained in that second set too. It’s a sign they haven’t been designed with quite the care and attention Sony or Sennheiser might apply. That said, I’d take these over the Sony MDR-XB650BT any day.

There are comprehensive controls on the right cup. There’s a rocker for volume, and a play/pause button also changes tracks with multiple presses. 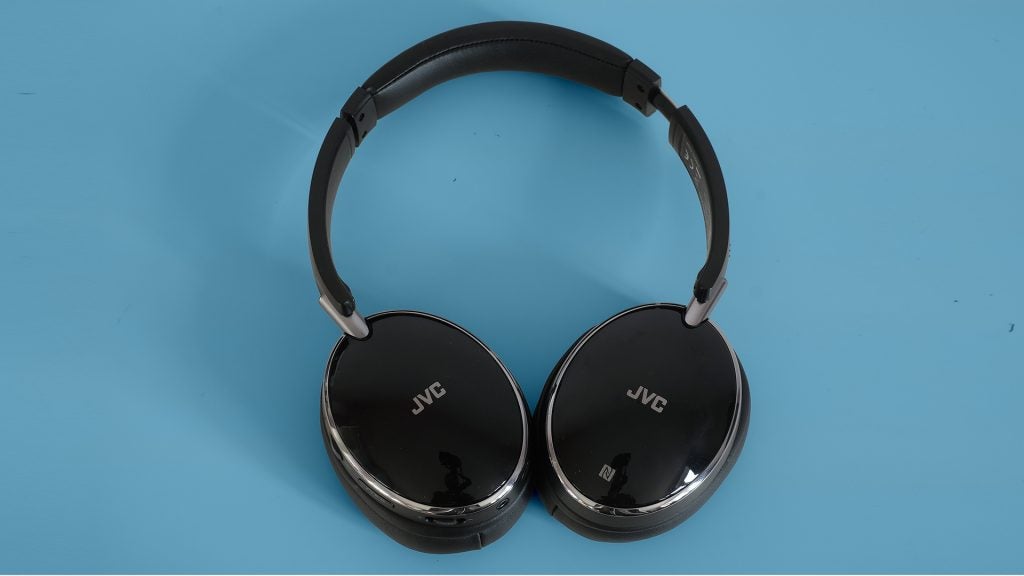 The JVC HA-S90BN sound fine; they’re not ear-grating and they don’t make music sound a muddy mess. However, the Urbanista Seattle and AKG Y50BT  both sound significantly better.

Let’s appraise them in their best-sounding setting, with active noise cancellation turned on. There are also three sound modes. Depressing the volume rocker switches between them. These largely alter the bass: standard, a bit more or a bit less. The first two sound best.

The JVC HA-S90BN lack mid-range bulk and definition. Texture of vocals are left represented by the upper-mids and treble, which are a little granular and unrefined. Turn off ANC and these same frequencies take on a honking character that can be hard on the ear with some tunes.

They’re also less focused than some. The soundstage is less well-defined; dynamics are flatter than those presented by the Urbanista Seattle Wireless. 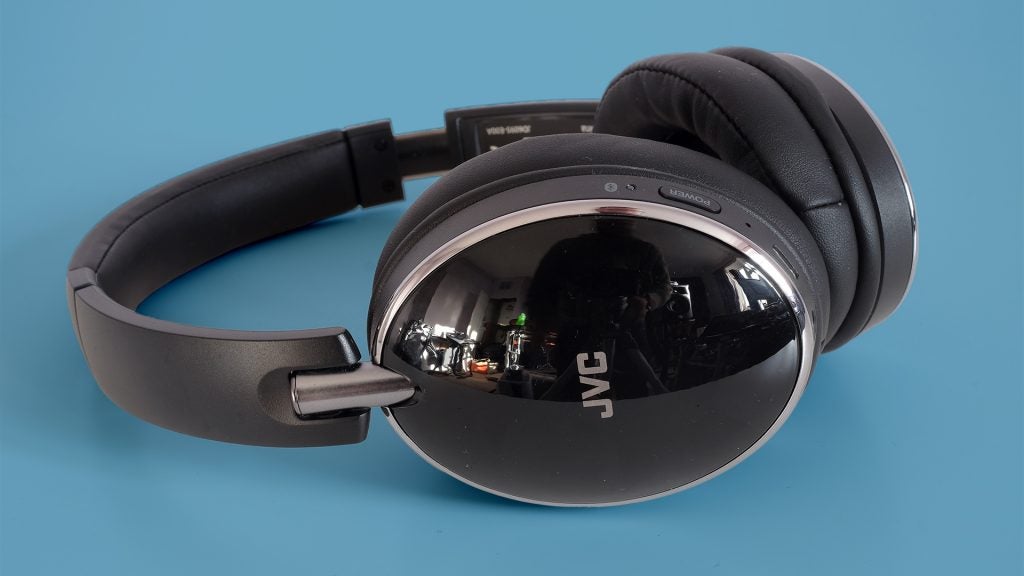 The underserved parts of the JVC HA-S90BN leave you with the impression they’re not quite as rich or smooth-sounding as they should be. They don’t lack bass, but other headphones deliver it with greater impact.

It’s our job to compare headphones such as the JVC HA-S90BN with the best in their price range. And they’re not quite up there. However, aside from the strange noise issue, they don’t commit any major sound quality sins given the price.

With ANC engaged, these headphones are enjoyable enough. The option to boost or trim the bass by a decibel or two is a neat addition too. 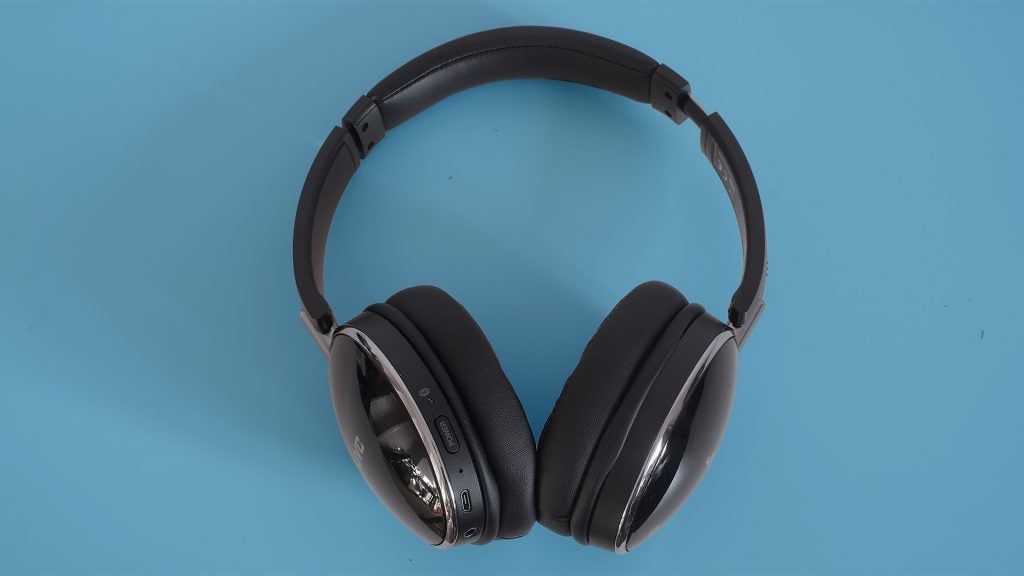 The JVC HA-S90BN have a few too many issues to earn one of our recommended badges; other units at the price sound better. The active noise cancellation isn’t particularly effective and there are a few tech gremlins inside. The AKG Y50BT and Urbanista Seattle are better all-rounders, if sound quality is your main concern.

Not the best-sounding at the price, but the JVC HA-S90BN offer plenty of features for your money.