The DV tape has been the recording format of choice in camcorders for the best part of a decade. But just as tape is fast disappearing from the living room, if not gone already, DV is now facing a number of usurpers. DVD-based camcorders from the likes of Sony and now Canon aim to provide a recording format you can just stick straight into your DVD player. But JVC has taken a different tack, and is backing hard disk technology instead with its Everio range.


The first few Everios were premium devices aimed at early adopters, with the GZ-MC500EK being a particularly accomplished example. But at over £700, the latter is never going to be a device to take on the mass market. So JVC launched the MG series, which doesn’t include any models as small and sexy as the MC500EK, but has other advantages. Apart from a more affordable price, the larger form factor has meant that the MGs can use a 1.8in hard disk instead of the Hitachi Microdrive of previous Everios. So larger capacities are available, with the GZ-MG50EK we looked at offering a commendable 30GB of storage. 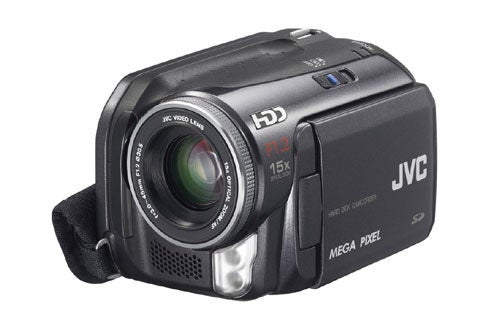 Although MPEG-4 seems to be the MPEG flavour of the moment, and particularly the H.264 variant, the Everios opt for the more mature MPEG-2 instead. MPEG-4 might be capable of higher compression, but MPEG-2 is more readily compatible with DVD burning. With such a sizeable capacity, even at the top Ultra quality setting, the 30GB drive is large enough for over seven hours of video. This equates to a data rate of 8.9Mbits/sec, around that of a standard DVD. If you’re willing to sacrifice quality you can squeeze nearly 38 hours of footage inside at the lowest Economy setting, although this uses MPEG-1 and is only equivalent to VideoCD. Whichever setting you choose, though, you’re going to get a lot more shooting done than the 20-minutes or so DVD camcorders can record on a single disc.


For those who might be a little worried about carrying an active hard disk around, the MG Everios include an anti-shock system reminiscent of the one IBM ThinkPads are now famous for. As soon as high Gs are detected, the Everio instructs the hard disk to lift its heads and park them, ready for the expected impact. This vastly increases damage resistance should you accidentally drop the camcorder. But there are obviously times when high Gs don’t mean impending doom – for example on a roller coaster. So you can manually disable this feature, although you’ll have to remember to turn it back on again afterwards as this doesn’t happen automatically.


Other than the recording system, though, the MG50EK is a pretty standard camcorder. The video image is captured by a 1/4.5in CCD with 1.33 megapixels, and the lens is a high quality F1.2 model. In this respect, the MG50EK hits a sweet spot that the cheaper MG20 and MG30 don’t with their 1/6in CCDs. In our tests, picture quality with the latter two models was noticeably inferior, so it’s worth paying the extra for the MG50. But more on that later in this review.

The MG50 also offers the usual range of controls you’d expect for a sub-£500 consumer camcorder. It’s obviously not meant for hobbyists, as no accessory shoe is provided for adding a video light or microphone. There’s no input for the latter, either, and no headphone jack for keeping track of levels. However, you can manually adjust focus, set shutter speeds from 1/15th to 1/4000th of a second, and exposure from -6 to +6. Aside from auto mode, you can also choose between halogen, cloud and fine white balance presets, or manually set this yourself. Four auto-exposure modes and four digital effects are also provided.


One problem with new camcorder formats such as the Everio has been editing the footage. However, now that the range has been around for about a year, most mainstream software has added direct support. Premiere Elements 2 can import video straight from an Everio camcorder over a USB 2.0 connection, and the latest version 10 of Pinnacle Studio supports the file format too. Although the Everio records MPEG-2 video, the audio is in Dolby Digital AC-3 stereo, and the files have a MOD extension rather than MPG. So not all software will recognise the files without specific support, even if it can edit MPEG-2. 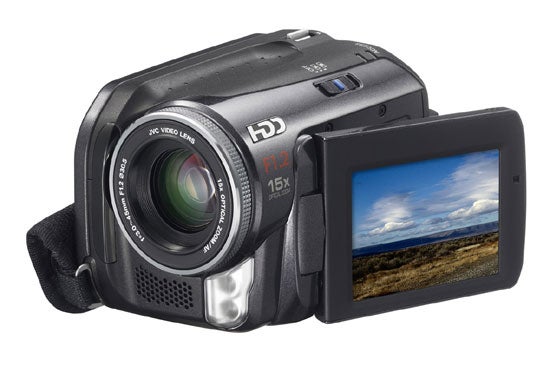 The frame-based compression used by DV is generally considered to afford better video quality than MPEG. But we didn’t notice any particular artefacts in the video we shot at the Everio’s best quality setting. In fact, we’d go so far as to say that the compression format has little noticeable effect on image quality at all.


However, the MG50 is a fairly average camcorder. It only has one CCD, although it is a relatively large one. Under good lighting, the image quality was good, with faithful colour reproduction and adequate contrast. When we moved indoors, the results remained commendable with good artificial lighting, but a certain amount of grain appeared when illumination was poor. Still, this is one area where the cheaper MG20 and MG30 really fall down. Considering that you’re quite likely to shoot in poor indoor lighting if you use your camcorder for capturing family moments, performance under these conditions is crucial. Fortunately, here the MG50’s larger CCD and F1.2 lens really prove their worth. Its abilities are in a different league to the MG20 and MG30, if not up with a three-CCD camcorder such as the Everio GZ-MC500.


Digital photography is another area where JVC’s premium Everio GZ-MC500 excels. However, with just a 1.33 megapixel CCD the MG50 can only manage digital stills at up to 1,152 x 864. The results will be good enough for your web page, but not for printing, so you’ll still have to stick a digital camera in your luggage when you head off on holiday.


The JVC GZ-MG50EK won’t appeal to enthusiasts. Instead, for those with more serious videomaking itentions we’d recommend Sony’s amazing HDR-HC1E. But for a general-purpose holiday camcorder, the JVC has a lot to commend it. With so much storage available, all you need to worry about is keeping it supplied with battery power.


Although there are cheaper Everios on the market, their failure in low light make them a false economy. And although the GZ-MC500 excels in this area, it will be far too expensive for most people, and its 4GB hard disk only stores an hour of video. If you fancy the idea of leaving the bag full of tapes behind, the MG50 shows the worth of hard disk technology in camcorders. Its video image quality is good, and at under £500 it gets the balance just right.