What is the JVC Everio GZ-RX645BE?

The Everio GZ-RX645BE is the latest flagship of JVC’s Quad Proof range of camcorders. The market for traditional camcorders has been under threat for some years, as more people make do with the increasingly reasonable capabilities of their smartphones instead. But action cameras have continued to thrive, with JVC making the decision a few years ago to focus its camcorder attention on devices that could be used in the same sort of environments as those models.

As such, the GZ-RX645BE can handle four different types of threat to its physical wellbeing. It can resist depths of up to 5m underwater. You can drop it from a height of up to 1.5m. It won’t let any dust or sand inside its workings. Finally, it can be used in temperatures as low as -10ºC.

Compared to the core specification of previous flagships, such as the GZ-RX515BE, not a huge amount has changed here. There’s still a 1/5.8-inch back-side illuminated CMOS inside, with 2.5 megapixels, which has remained JVC’s sensor of choice for some years now. This allows Full HD video recording. However, a bit of interpolation is thrown in to provide stills of up to 3680 x 2760. 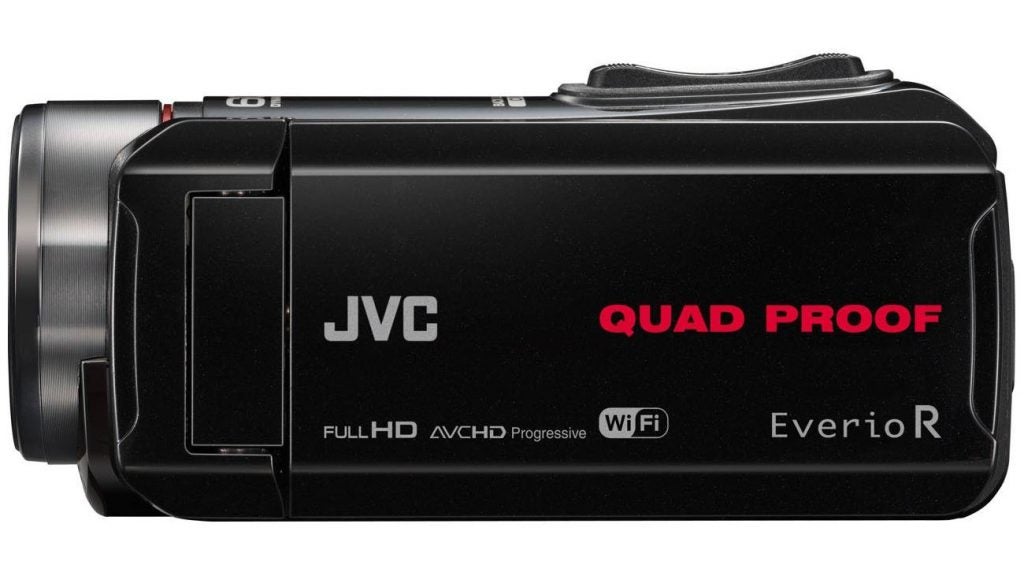 The now venerable AVCHD format is used for video, but JVC now offers up to 50p at 27Mbits/sec, at Full HD resolution, whilst 50i video uses a slightly lower 24Mbits/sec. There’s 8GB of memory on-board, although some of that is taken up by the Pixela Everio MediaBrowser 4 software installers. You can install this onto your Windows PC straight from the camcorder memory. The remaining 6.53GB of built-in memory will be sufficient for 33 minutes of footage, but you can also install an SDXC memory card of up to 128GB.

The GZ-RX645BE offers a robust construction. There aren’t any open ports on the body of this camcorder, with the micro-USB, AV mini-jack and mini-HDMI connections all located behind a double-locked panel. This slides into place to create a watertight seal, after which a second button locks it in place.

The panel also protects the full-sized SD card slot, but there’s no access to the battery at all; this is fully enclosed and non-removable. As a result, you won’t be able to carry a spare with you to prolong battery life, although this model is rated to last five hours, so this is less of a problem.

There’s no lens cap or built-in cover for the lens. Instead, it is protected by toughened glass, so you’ll need to keep this clean. 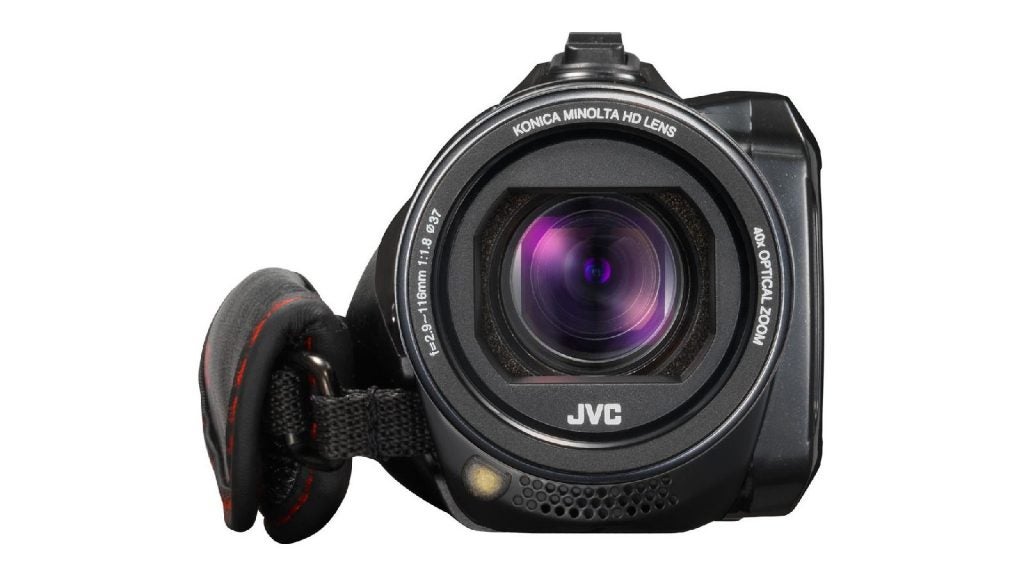 Some previous JVC Quad Proof cameras didn’t offer a filter screw thread, but this one can accept 37mm add-ons. The lens itself is Konica-Minolta sourced, and offers f/1.8 to f/6.3, which is decent.

One reason you may still wish to buy a standalone camcorder in this era of increasingly capable smartphones is the optical zoom. In the case of the GZ-RX645BE, there’s a sizeable 40x optical zoom, and this is boosted to 60x in dynamic mode, which cuts into the sensor to provide a little more magnification.

Another feature usually lacking in smartphones but present in dedicated camcorders is image stabilisation. Unfortunately, with the GZ-RX645BE, this isn’t of the more capable optical variety, but an enhanced electronic version that JVC calls ‘Enhanced Advanced Image Stabilisation’. This uses a few spare pixels on the CMOS, and so can’t be enabled at the same time as the dynamic zoom. It’s a reasonably capable system, but not in the same league as Panasonic’s top optical stabilisation.

The GZ-RX645BE uses the typical ‘Palmcorder’ format, with the record button on the back and zoom rocker on top. In this respect, it’s more ergonomic than a smartphone. Configuration is performed via the 3-inch LCD. There are two shooting modes: ‘Intelligent Auto’ and ‘Manual’. With the former, the main configuration option is how the touch priority auto-exposure/auto-focus works, using face tracking, colour tracking, or area selection.

Switch to manual and the options broaden a little. Manual focusing becomes available, and a manual brightness control is enabled, with options from -2 to +2 EV in 13 steps. Backlight compensation can be turned on, and there are white balance presets for sun, shade, artificial lighting, and both blue and green underwater activity, as well as fully manual mode. There’s a tele macro option too.

This isn’t a particularly extensive range of manual options; there’s no direct control over shutter and aperture. In both manual and auto modes, however, you also get the ability to overlay some rather cheesy animation effects – including things like floating hearts.

In a separate recording effects section, there’s a slightly strange selection of a grainy monochrome filter, baby, and food options. JVC has clearly made a few assumptions about what its customers use their camcorders for. 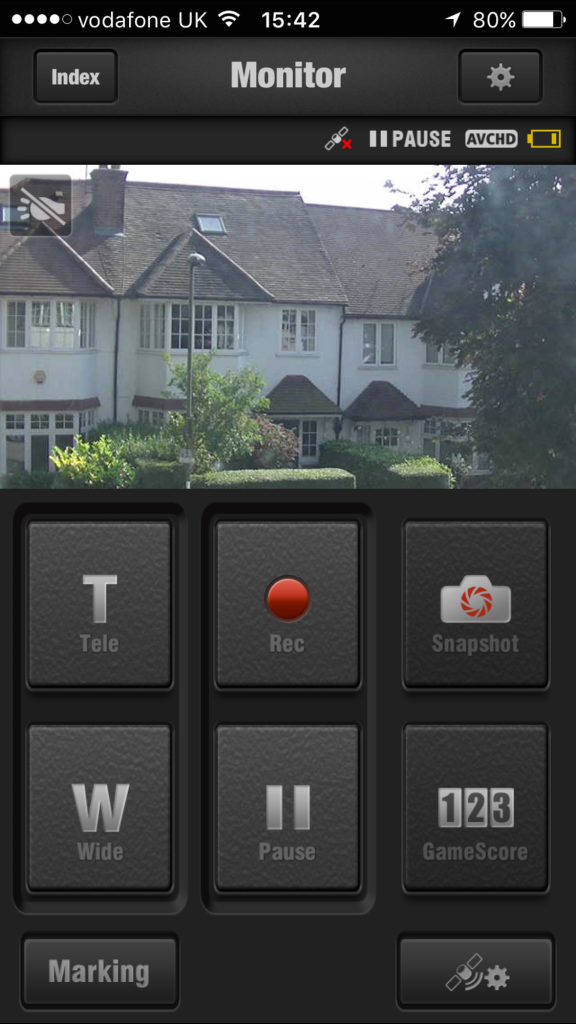 This being a top-of-the-range model, it has built-in Wi-Fi. You can access the camera by connecting to it directly as an access point, or you can connect it to your existing Wi-Fi. The Everio sync. app can then be used to control zoom and toggle recording, although this only works in 50i mode, not 50p. You also can’t change any of the camcorder’s settings, but you can review your recordings.

Although traditional camcorders can still beat smartphones when it comes to features – in particular, the optical zoom – they don’t necessarily offer better image quality anymore. Unless they shoot 4K and have a large sensor, that is.

The GZ-RX645BE isn’t in either of these categories, but it does produce good colour fidelity in bright light, even if it lacks a little detail. I also found that if you’re shooting in very bright sunlight, glare on the protective glass over the lens can soften the image.

Here are two samples of footage taken with the JVC Everio GZ-RX645BE. The first one is of a pigeon in a tree, and the second one a frisky squirrel frolicking through the grassy woodland. You’ll notice that there’s a little tearing as the camera zooms in on the shot of the pigeon.

These are reasonable examples of the footage otherwise, but also note how the footage softens when the dynamic zoom kicks in at the maximum magnification.

Should I buy the JVC Everio GZ-RX645BE?

The JVC Everio GZ-RX645BE is an incremental step up for JVC, and as such it doesn’t offer a huge improvement over the previous generation. Video quality is essentially the same.

The big question with this level of camcorder is always whether you should just make do with your smartphone. But the GZ-RX645BE has a powerful optical zoom and is resilient enough for capturing moments in inclement conditions, so if you need a camcorder for any weather, it makes a decent choice.

The JVC Everio GZ-RX645BE is reasonably capable for shooting in unfavourable weather conditions.