What is the JVC Everio GZ-RX515BE?

The Everio GZ-RX515BE is JVC’s latest range-topping “Quad Proof” camcorder. So it is accredited as water, dust, shock and freeze resistant. Whereas Panasonic has opted to push 4K resolution as its strategy for 2015, with models like the HC-WX970, JVC is sticking with ruggedisation. Both companies are surely feeling the pressure from the increasing abilities of smartphones, but taking different routes to combat this.

Since last year, JVC has been equipping its mainstream camcorders with serious action camera resilience, taking their lead from the ADIXXION GC-XA2 and GC-XA1 that the company had released previously. So the GZ-RX515BE is guaranteed waterproof to a depth of 5m, conforming to the 529 IPX8 standard. It’s dustproof according to the 529 IP5X standard, and can withstand a low temperature of -10C. The shockproofing conforms to MIL-STD 810F Method 516.5-Shock, which in layman’s terms means it can handle a drop from up to 1.5m.

The ruggedness is identical in specification to previous Quad Proof JVC camcorders. Indeed, the GZ-RX515BE is essentially the successor to last year’s Everio GZ-RX110BE. It carries on with the same sensor specification of a 1/5.8-inch back-illuminated CMOS with 2.5 megapixels. So image quality will only be marginally improved, if at all. This provides the same 60x dynamic zoom on top of the 40x optical zoom, which takes advantage of spare sensor pixels rather than digitally expanding the image. 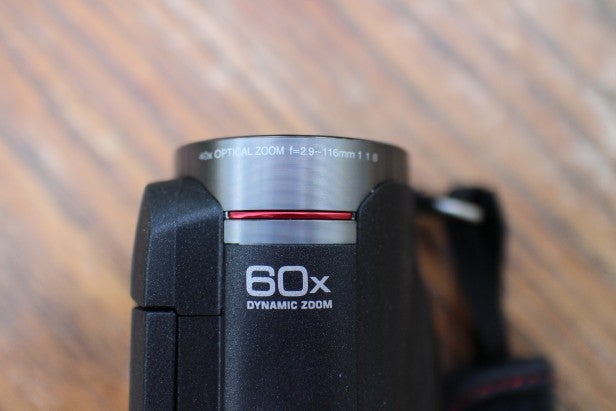 The Konica Minolta HD lens is protected by a thick glass window. It’s relatively mediocre optically. Although the lens is rated f/1.8 at full wideangle, this drops to f/6.3 when zoomed in. This will have a noticeable effect on low light performance in telephoto shooting. JVC has also not equipped the GZ-RX515BE with optical image stabilisation, although this will be in part because of the fragility of this kind of system and the rugged intentions of the camcorder. Instead, a digital system called Enhanced Advanced Image Stabilisation is used. It does provide some reduction of vibrations, but not in the same league as an optical system.

Since JVC has not made the leap to 4K yet with its consumer camcorders, the GZ-RX515BE sticks with Full HD resolution and the AVCHD format. It can also capture still images up to 3,680 x 2,760 pixels. The video can be recorded as 50i or 50p, but there is no control over data rate. In 50p mode, footage is captured at 24Mbps, so the 8GB of memory on board will last a little under 45 minutes. 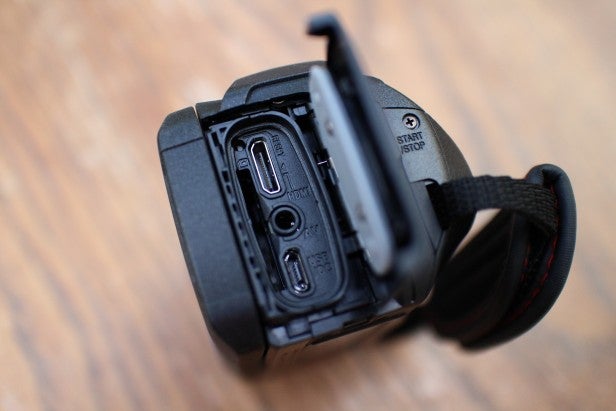 As a result, you may want to avail yourself of the SD card slot to increase storage, particularly as the high capacity battery is rated to last five hours, a figure we didn’t see any evidence to disbelieve so long as you don’t enable the WiFi function (of which more in a bit). This long duration is fortunate because the battery is not removable, so you won’t be able to carry a spare with you to swap out when the original one is depleted. On the other hand, standard Micro USB is used for charging, giving you the option to re-juice the GZ-RX515BE with a standard portable battery pack.

Where the GZ-RX515BE has changed noticeably since the previous Quad Proof generation is the design of the chassis and menu system. The camcorder body is a more subtle graphite shade with brushed metal surrounding the lens, rather than the black and shiny chrome of the previous version. However, the door protecting the ports uses the same double-locking mechanism, rendering it all but impossible to open accidentally. 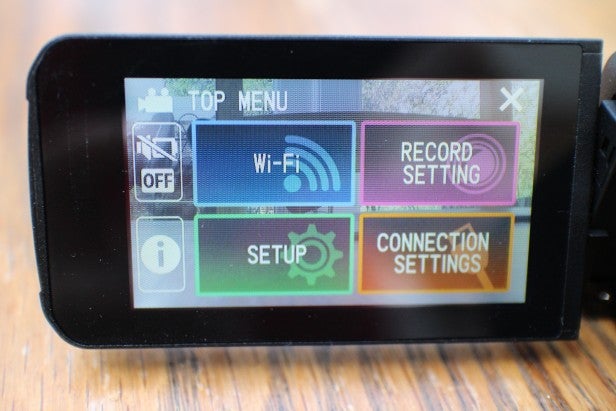 The onscreen icons look the same as previous versions, but once you drill into the menu, the system is simpler and more finger-friendly than before. The main menu is based around four large icons, which then lead to pages of further icons and then the various settings that are available.

The GZ-RX515BE is not packed with manual features, however. Switching from Intelligent Auto to Manual merely exposes an extra page with manual focusing, a global brightness control, white balance and backlight compensation. The white balance options include blue and green options for underwater usage, alongside the usual indoor / outdoor presets and full manual configuration. There is no independent control over shutter and iris. 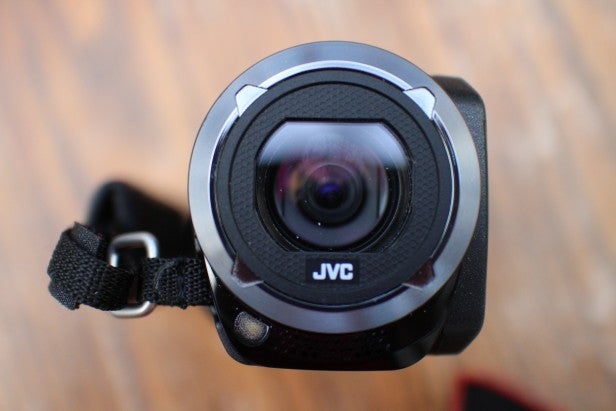 You do get a modest built-in video light, some cheesy animation effects, plus a slightly bizarre selection of three digital “Recording Effects”. These include Baby, Grainy Monochrome, and Food – presumably with the latter aimed at the growing trend for people taking shots of their meals to post on social media. There’s a small amount of control over the microphone level (up or down one increment), but that’s about it on the configuration options. You’re clearly meant to switch this camcorder to automatic mode and leave it there most of the time.

The GZ-RX515BE does have built-in WiFi, which on paper is excellent at this price. We were able to control the camera remotely with the Everio Sync 2 application when connecting to it directly via WiFi. However, we found configuring the camcorder for access via an existing WLAN unduly complicated. The camcorder itself only allows you to connect using WPS. There is no option to scan for a wireless network and enter security details manually. 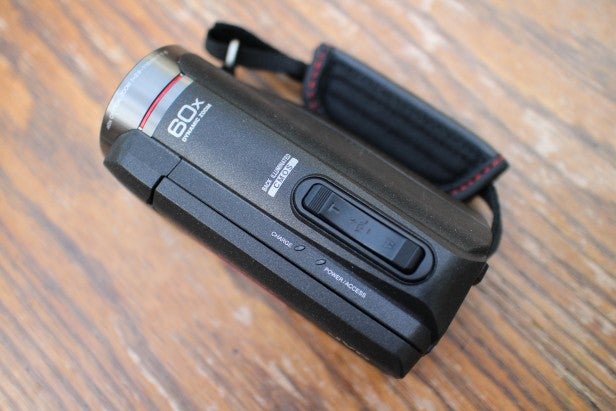 We couldn’t get WPS to work with our BT HomeHub, although a little digging found a QR code system within an online manual for the GZ-RX515BE. This got the camcorder onto our WLAN, but we still didn’t find we could connect the Every Sync 2 app this way. There’s also no facility to stream to a service like USTREAM or LIVESTREAM, which is a bit of omission considering the ADIXXION cameras have this capability.

After the 4K camcorders from Panasonic we have reviewed recently, such as the HC-VX870, most Full HD-only models seem a bit pedestrian in comparison. The GZ-RX515BE shoots decent footage in average lighting conditions and brighter. Colours are faithful and the level of detail is good if not outstanding.

The GZ-RX515BE doesn’t do too badly in poor illumination, either. We were reasonably impressed by the quality of the footage as light dropped, with colour definition remaining clear down to the kinds of levels you’re likely to find in a dimly lit house (or underwater!). However, there is a noticeable amount of fine grain under these conditions, much more than is visible with camcorders sporting larger chips, such as the aforementioned Panasonic HC-VX870.

Should I buy the JVC Everio GZ-RX515BE?

The JVC Everio GZ-RX515BE is no game-changer, but it is worth considering if you want a regular HD camcorder capable of withstanding inclement holiday conditions, or sports activities, although it’s probably not the best choice for extreme sports due to its size. It’s worth noting that this camcorder is essentially the earlier JVC Everio GZ-EX515BEK with some tweaked features, a new menu and the Quad Proof chassis.

But with only a small premium for the ruggedness compared to the earlier model, the GZ-RX515BE makes a decent stab at making a budget HD mainstream camcorder desirable again. It’s a shame the Wi-Fi provision is so clunky, but if you do fancy shooting decent video without worrying about breaking (or water logging) your camcorder, there’s just about enough here to warrant the purchase.

The JVC Everio GZ-RX515BE is a fairly standard HD camcorder in a rugged body, for a reasonable price.