JVC jumped on a couple of bandwagons at once when it launched the GZ-MS100. Not only was this the company’s first flash memory-based model, it also promised direct YouTube uploading, like the Flip Video Ultra and Creative Vado. Now we have a mild update in the form of the Everio GZ-MS120. So what’s new?


For a start, the chassis looks a little fatter, although in reality it’s virtually the same size. It is around 20g heavier than the GZ-MS100, however. Most of this can be attributed to the most major improvement – dual SD Card slots. In theory, you could populate both with 32GB SDHC media. Video is recorded in the same selection of MPEG-2 formats, with 8.5Mbits/sec the top data rate. So with 64GB of flash memory on board you could record 15 hours of footage, and the GZ-MS120 will switch between cards automatically as you record. 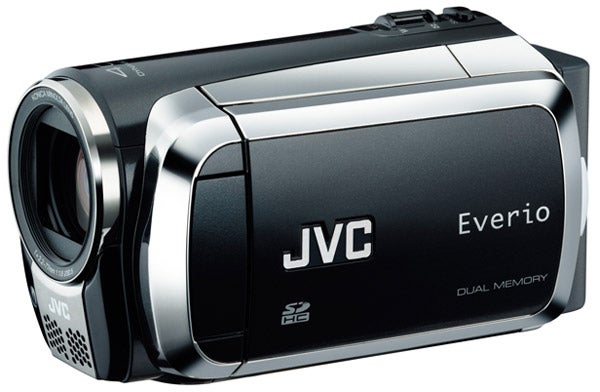 There are some more subtle differences, too. The built-in sliding lens cover is now automatic rather than manual. Another difference you probably won’t immediately notice is reduced power consumption. JVC now claims the camcorder draws 1.8W rather than 2.3W. Considering the same battery pack is supplied, the GZ-MS120 should last noticeably longer. We certainly found it lasted for well over two hours of usage, which is exactly what you need for a pocket-friendly shooter such as this. The LCD is slightly higher resolution, too, with 123Kpixels compared to 112Kpixels. 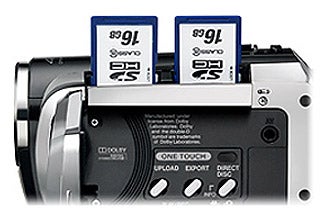 Internally, though, the GZ-MS120 is pretty much the same as the GZ-MS100. It still relies on a small 1/6in CCD sensor with 800Kpixels. This allows the camcorder’s Konica Minolta lens to offer a whopping 35x optical zoom. However, the GZ-MS120 offers a slightly improved top digital photo resolution of 832 x 624, where its predecessor maxed out at 640 x 480. The image processor is now JVC’s HD Gigabrid Premium, rather than the Gigabrid Engine of the predecessor. 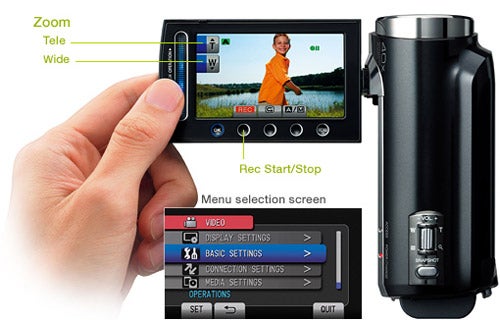 Camera control is also still mostly provided by JVC’s (literally) flashy Laser Touch Operation. In manual mode, you can adjust focus, brightness, and shutter speed. However, focusing with the Laser Touch Operation is at best a black art, so you probably won’t want to use it. You can at least independently configure the shutter from ½ to 1/4,000th sec, and brightness from -6 to +6. Alternatively, the usual array of Night, Twilight, Portrait, Sports, Snow and Spotlight scene modes are available. These settings are all buried at the second level of the menu, though, further discouraging you from using them. Fortunately, backlight compensation has its own special control. You simply touch the appropriate position on the Laser Touch Operation strip to enable or disable it.

Being very much a point and shoot model, the GZ-MS120 doesn’t include features for the enthusiast. There is no accessory shoe, nor minijacks for an external microphone or headphones. There is a little LED video light built in, and the control for this is relatively easy to access in the menu. It’s pretty weedy, but should help with picking up some sort of picture at short range when the environment would otherwise be too dark.


JVC has also included the multi-purpose strap design we first noted with the Everio GZ-HD300. A catch at the rear loosens the strap, which can be adjusted to perform two functions. You can either have the camcorder hang from your wrist, like a compact camera. Alternatively, you can open the catch and pull out the side strap cunningly hidden inside a flush rubber strip and hold the camera Handycam style. 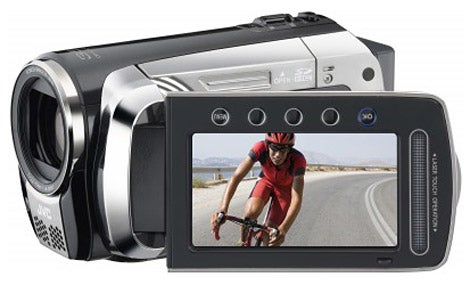 With its identical sensor and optics, the GZ-MS120 wasn’t likely to perform much differently to the GZ-MS100. The slightly improved image processing engine primarily benefits power consumption, as mentioned earlier. But we noticed mild benefits to low light performance. In particular, the yellow cast so common with camcorders which rely on a 1/6in sensor was reduced.


In good lighting, the GZ-MS120 produces a heavily saturated image, but otherwise colours are relatively faithful. There’s also a reasonable amount of detail, considering this is a low-end standard definition camcorder. As with the GZ-MS100 and GZ-MG330, the real party piece, however, is how well this camcorder performs in moderate artificial lighting – a key requirement for a camcorder that’s aimed at shooting family moments. A commendable amount of colour and detail are retained in these conditions, and although there is grain, the noise is not so great that detail disappears.

When the time comes to watch your footage, only two options are available. Lurking cunningly under the LCD is a minijack for outputting composite analogue video, with RCA stereo audio. But otherwise you will need to attach the GZ-MS120 to a computer via USB 2.0. The MPEG-2 video files use a MOD format, which is now widely supported by editing software. 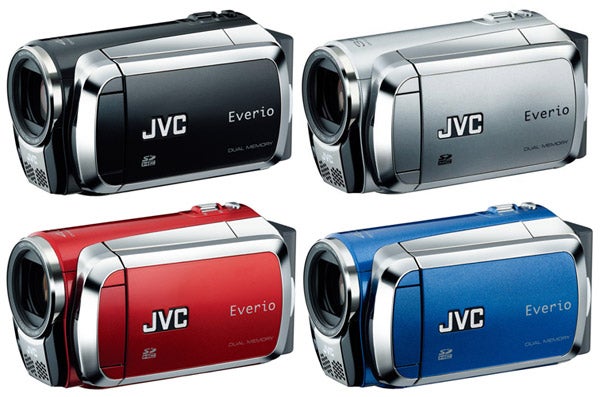 But the GZ-MS120 is specifically aimed at posting video online. The One Touch Upload to YouTube operates in the same way as the GZ-MS100 (and other JVC camcorders which have subsequently been released with this feature). Unlike the new breed of pocket Internet camcorders, the software isn’t stored on the device itself. You must load this from CD first. The app itself has changed, however. Instead of a special version of CyberLink PowerCinema NE, you now get Pixela Everio MediaBrowser, although this performs essentially the same function.


In order for video to be compatible with One Touch Upload, you need to have pressed the Upload button prior to recording it. This limits the duration to 10 minutes, the current maximum for videos on YouTube.


The Everio GZ-MS120 retains the half-decent image quality which made its predecessor a contender, and adds one or two extra features. JVC should also be commended for the fact that the Everio GZ-MS120 doesn’t appear to come with a price increase, unlike most of the new camcorders we have seen this year. It arrives at much the same cost as its predecessor did at launch, which makes it relatively better value. However, you can still pick up JVC’s own Everio GZ-MG330, for under £300. With its 30GB hard disk and similar image quality, it remains the best buy if you’re on a tight budget.