As the pioneer of consumer camcorders which use hard disks for recording, JVC had a head start with its Everios. When we looked at the GZ-MG505EK last year, it still led the pack for next-generation camcorders. But now that both Canon and Sony have joined the fray, with quite a few models offering high definition recording to disk as well (including JVC’s own GZ-HD7), a standard definition camcorder like the GZ-MG575EK can’t trade on the novelty of its recording medium alone. So is this Everio, like its predecessor, the must-have video device for those not ready for the move to HD, or is it now just an also-ran? 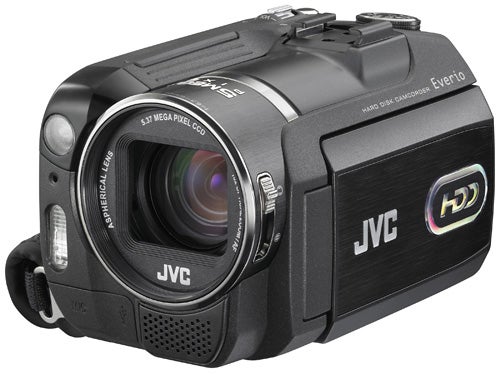 Although ostensibly the successor to the GZ-MG505EK, the MG575EK takes a rather different approach electronically. Where the older model sported a trio of reasonably sized 1/4.5in CCDs with 1.3Mpixels apiece, the new one uses a single much larger 1/2.5in sensor. The gross resolution is 5.4Mpixels, though. So maximum still image resolution remains a similar 2,592 x 1,944. This means the MG575EK could readily double as your digital camera, albeit a portly alternative. It’s also worth noting that no pixel shifting is used with the MG575EK, as the CCD’s native resolution matches still image size. 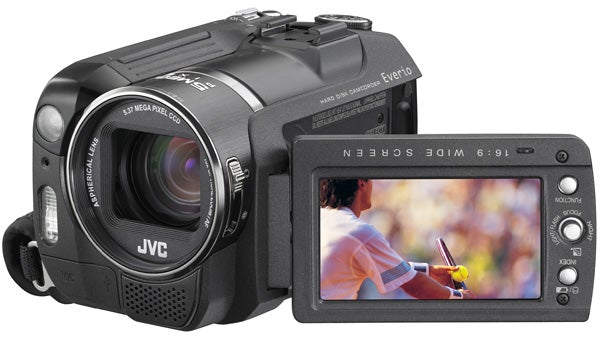 The JVC includes a 40GB hard disk for video recording, which for standard resolution video is pretty capacious. Even at the top Ultra Fine setting, which uses an 8.5Mbits/sec data rate with MPEG-2 compression, you can record 570 minutes of video, rising to 50 hours in the quarter-resolution Economy mode. An SD slot is also provided, should you wish to extend your storage or record your still images on a removable medium.


Although nowhere near as svelte as Panasonic’s HDC-SD5, the JVC is comfortable to use. It has an integrated lens cover, which operates manually via a slider on the side of the lens. There’s no viewfinder, but using your hand to steady the camcorder via its LCD puts both hands in just the right place to operate most of the important controls.

Despite its sub-£500 street price, the MG575EK offers a decent set of features for the more serious video maker. A standard-sized accessory shoe is built in, plus a microphone minijack. However, the AV jack doesn’t double as a headphone socket, nor is there any manual control over sound levels, so you won’t be able to monitor the signal from an external mic.


For the slightly more adventurous user, JVC has included five Program AE modes on a separate dial for speedy access, including Twilight, Portrait, Sports, Snow and Spotlight. If you want a little more control, the dial is also home to the Shutter and Aperture Priority modes. The shutter can be varied from ½ to 1/4000th (or 1/500th in photo mode), and the aperture from F/3.5 to F/16 (or F/8 in photo mode), but you can’t set both at the same time.

Manual focusing is performed via the joystick located on the 2.7in widescreen LCD. This is also used for accessing the night mode, which slows the shutter right down to provide a viewable image in low light. Alternatively, you can use the joystick to turn on the built-in LED video light, which is reasonably effective at short distances. In photo mode, the same setting turns on the flash. The joystick provides access to backlight compensation, too, and offers a choice between three different spot exposure locations.

The joystick is also used to get around the full menu, and it has a third use when the Function button is invoked in manual mode. Here, you can adjust exposure (which JVC calls Brightness) in increments between +6 and -6, or choose between the three presets and manual or automatic white balance options. JVC also provides four digital effects in the Function menu, although we would always recommend this kind of processing be left to the editing stage.


In all, although the controls are scattered around a bit, it’s a relatively user-friendly system once you get used to it, giving you quick access to most of the important settings. There’s even a neutral density filter available for reducing the amount of light reaching the sensor. This could be handy in extremely bright conditions, which force a camcorder to use high shutter speeds and narrow apertures – settings you’ll want to avoid if, for instance, you’re trying to increase the amount of motion blur or reduce the depth of field, respectively.

The GZ-MG505EK set a high standard for image quality. With its trio of relatively large CCDs, it offered great performance in a wide range of lighting conditions. The GZ-MG575EK’s single CCD in theory puts it at a disadvantage, but the larger size compensates for this somewhat.


In really low light, the new model was slightly behind the old one at maintaining colour fidelity. But in more clement illumination there was little to separate the two models. In bright sunny conditions, the GZ-MG575EK acquitted itself extremely well, with rich colours and plenty of detail. Choosing one of the lower quality settings does introduce artefacts, but at the highest setting the detail is pin-sharp. 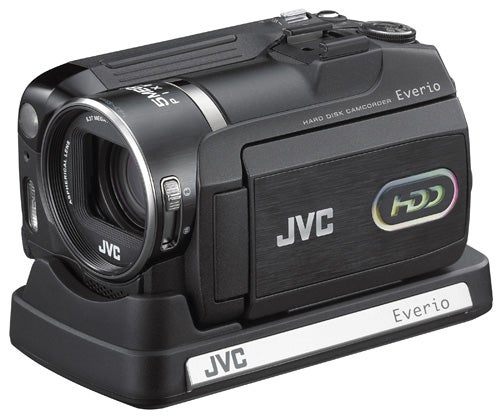 Aside from the aforementioned AV output, the camera itself only offers USB connectivity. The AV cable also only provides composite analog video and RCA audio. But JVC supplies a docking station which adds S-video and even FireWire, alongside extra AV, USB and power attachments.


With JVC’s Everios now on the market for some years, editing the footage won’t cause any problems. All the leading editing applications can now import footage straight from an Everio, and edit it without issue. Only DV remains more widely supported.


When we looked at the GZ-MG505EK a year ago, it proved to be a consummate all-rounder. Its video quality was excellent and its still images of high enough resolution to give your digital camera a hard time. Whilst the GZ-MG575EK offers similarly excellent features, the market has moved on somewhat. But if the leap to HD camcorders is out of your budget, the JVC’s sub-£500 price makes it a tasty prospect for family holiday duties, with an eye on more serious usage if desired.