JVC was the first company to release consumer-oriented hard disk-based camcorders. But its Everios are under increasing competition from other manufacturers – as well as the latest flash memory models. So JVC is making its hard disk camcorders smaller, more compact, and better value. Leading the charge at the budget end of the scale is the GZ-MG330, which is also aiming to please the more style-conscious videomaker. You can have it in red, blue, silver, and black. So you can choose whichever one matches your usual outfit.


Despite its fruity new look, the MG330 has a relatively run of the mill specification. It’s built around a 1/6in CCD with a gross 800,000 pixels, but only half that number is used for video or still images. This is par for the course for a camcorder at this price, and the largest digital photos are therefore only 640 x 480. So the MG330 is no convergence special either. 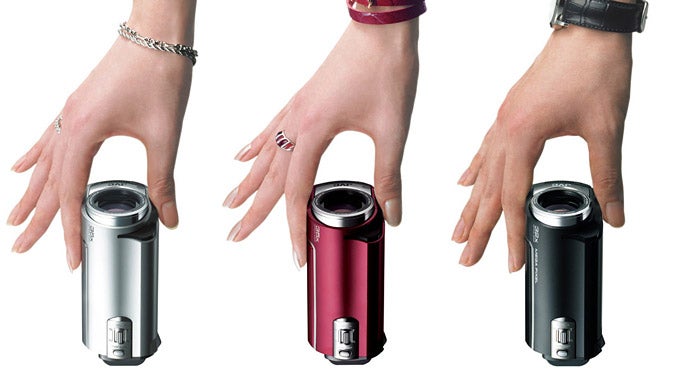 Thanks to its small sensor, the JVC offers a whopping 35x optical zoom, although you can add digital zoom to make 70x or a ridiculous 800x. There’s a manual shutter over the lens, instead of a cap, which is operated by a switch on the side. Image stabilisation is of the digital variety, rather than the more effective optical version. The microphone is sensibly placed at the front of the unit, rather than on top as with so many camcorder designs these days. 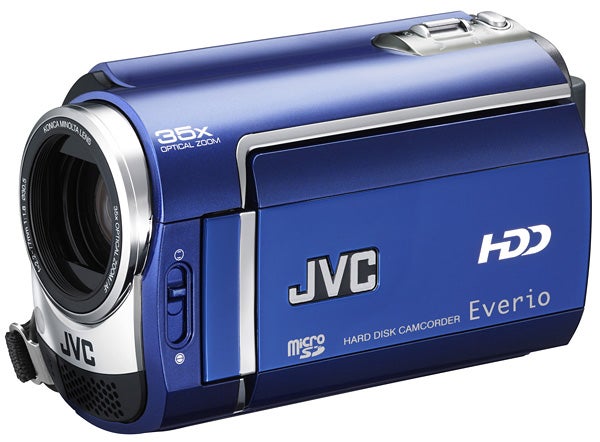 Video is primarily recorded to a 1.8in hard disk with 30GB capacity, although there is a slot for a micro SDHC card. Shooting is exclusively at the DVD resolution of 720 x 576, using MPEG-2 compression. Four quality modes are available – Ultra Fine at 8.5Mbits/sec, Fine at 5.5Mbits/sec, Norm at 4.2Mbits/sec, and Eco at 1.5Mbits/sec. In the latter mode, you can store over 37 hours of video, although this drops to around seven hours in Ultra Fine.

In the auto setting, there’s nothing more to do than point and shoot. But if you do want to tune your video more finely, there are plenty of options available. The MG330 has a novel control system called ‘Laser Touch Operation’, which consists of a strip down the side of the LCD, which you stroke to change settings up or down. The pulsating blue light involved is rather gimmicky, and more than a little reminiscent of Knight Rider’s KITT. But it’s a fairly pleasant and easy system to use. 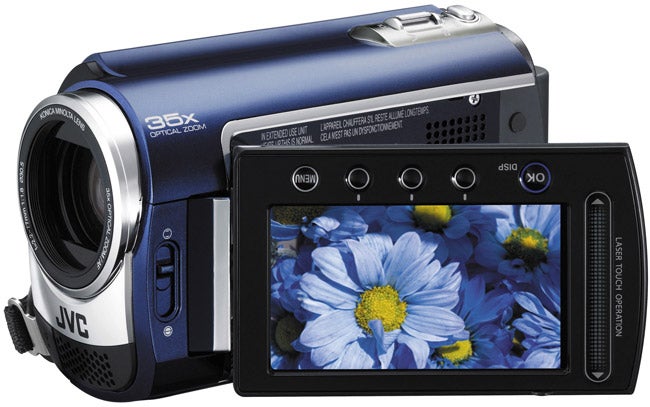 In manual mode, the MG330 offers a decent selection of controls. However, all of them are found a few levels into the full menu system. There is no joystick-operated quick-access system as found in Canon and Panasonic camcorders. Backlight compensation, auto-gain control (AGC) and the program AE modes are available at the first level of the menu. The latter includes all the usual subjects – Night, Twilight, Portrait, Sports, Snow, and Spotlight.


But all other options require a trip to the next level of the menu, via Manual Setting. White balance choices include Fine, Cloud and Halogen presets as well as auto and manual. Exposure control is found under the heading Brightness, and offers single steps from +6 to -6, with no direct correlation to iris F-stops. But you can set shutter speeds from ½ to 1/4000th. You can even swap between whole frame and spot metering. Finally, there’s a tele-macro mode and the usual array of digital effects, which are only worth using if you never intend to edit your footage on a computer.

Despite the decent level of manual controls, this is not a camcorder for the enthusiast. It has no input for an external microphone, and no accessory shoe to mount it on. There’s no minijack for hooking up headphones, either. The MG330 has a few other novel features for the home user, though, most notable amongst which is the Register Event ability. This lets you log all video shot under a preset heading, such as Vacation 1, Holiday 1, Sports 1, Anniversary 1 and so on. These can then be used to group your files in playback mode, which will be handy when you have hours of footage stored on the JVC’s hard disk.

In well lit outdoor conditions, the Everio does a commendable job. Even in fully automatic mode, footage is nicely saturated, yet true to life. The digital image stabilisation was better than we expected, too. As with all camcorders relying on a small 1/6in sensor, the MG330’s biggest weakness is low light. But even here it outperformed our expectations. We were quite impressed at how much colour information was retained in relatively gloomy conditions – a particular weakness of JVC’s camcorders in the past. There wasn’t a huge amount of grain in low light, either, although colours become yellow-biased in our regular ‘100W-illuminated living room’ test. Overall, the MG330 punches above its weight in most conditions.

When it comes to previewing and editing the results, there are two options. A minijack is available, with a breakout cable for hooking up to a TV via composite analogue video and stereo RCA audio. Alternatively, a USB connection lurks secretively at the front of the unit, hidden next to the built-in microphone. Footage can be dragged off or imported onto a PC or Mac. The Everio’s MOD video files are now widely supported by video software, having been around for about four years. So there should be no issues editing the clips.


Despite being a hard disk-based camcorder, the JVC Everio GZ-MG330 weighs less than 400g. It’s still a bit heavy and bulky for carrying around in a pocket of any nature, but you won’t think twice about stuffing it in a bag when you head out for a trip. This is rather impressive, and negates one of the weaknesses of the hard disk camcorder format. Couple that with its decent image quality in most conditions and very reasonable price, and the Everio GZ-MG330 makes for a bargain choice.