JVC has often positioned itself as the maverick in the camcorder business. Where Canon, Sony and Panasonic usually offer products for every sector of the market, JVC tends not to focus on the high-end video enthusiast, and didn’t release a model aimed at this type of user for most of 2009. However, at long last the Everio GZ-HM400 has arrived, packing features to put JVC right back in the frame against the best its main competitors have to offer.


The HM400 is built around the same sensor specification as the Everio GZ-X900 launched in the first half of 2009. This is a huge 1/2.33in CMOS with a whopping gross 10.3-megapixels, one of the largest, highest resolution sensors in any camcorder currently available. The main recipient of the high resolution is digital photography, with still images available up to 3,456 x 2,592 without interpolation. Storage comes in the form of 32GB of internal flash memory and this can be boosted by up to 32GB again by adding an SD/SDHC card.


Where JVC has really made improvements for the HM400, however, is in manual control. Instead of relying almost entirely on JVC’s incredibly fiddly Laser Touch Operation to access the majority of settings, the HM400 offers a host of discrete buttons and a control knob adjacent to the lens. There is no lens ring – Panasonic remains the only company to offer this in its highest-end consumer camcorders – but the knob is the next best thing, and Canon also adopted the same approach for its LEGRIA HF S10. 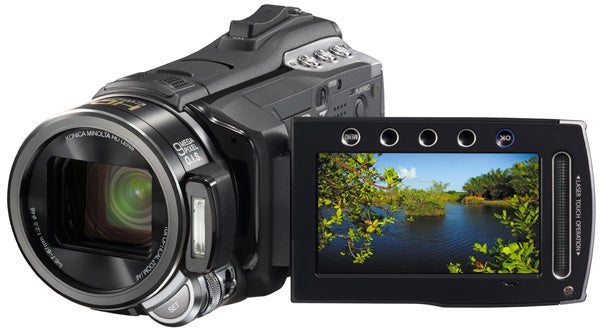 To activate the knob, the camcorder must be switched to manual mode using the button on the LCD edge. A nearby switch then alternates its operation between manual focusing and exposure. The knob doesn’t make effects like focus pulling quite as easy as a lens ring, but it does make manual adjustment of focus much more fluid than menu buttons or JVC’s Laser Touch Operation. Focus and exposure aren’t its only functions, either. Three buttons along the top rear of the body further extend the knob’s usefulness, so let’s take a closer look at them.

The A button enables an aperture priority mode, so the knob then adjusts iris F-stop. Press the S button instead and you get a shutter priority mode, where the knob controls shutter speed. You can’t configure both parameters simultaneously, however. The third button is marked U, and it can be adapted to a number of different functions via the full menu. These include focus assist mode, backlight compensation, photometry area, white balance, the high-speed recording setting, shutter mode and continuous shooting speed. The knob then adjusts the parameters for the given function, in the majority of cases, or the button itself may be used to cycle through the options, for example if it has been configured to control high-speed recording.

The latter is a fun option, which lets you capture footage at frame rates much faster than usual, for smooth slow motion at the regular speed. Many Sony camcorders also offer this facility, but with only a single setting. The JVC has three options – 100 frames/sec, 250 frames/sec, and 500 frames/sec. However, all necessitate quality compromises, with footage shot at resolutions of 480 x 270, 480 x 116, and 640 x 72 respectively. You’re also limited to under five seconds of shooting in each case, and under three with the fastest option. The resulting footage is longer, as it’s played at 25 frames/sec, but high speed recording is more of a fun feature than of serious use. 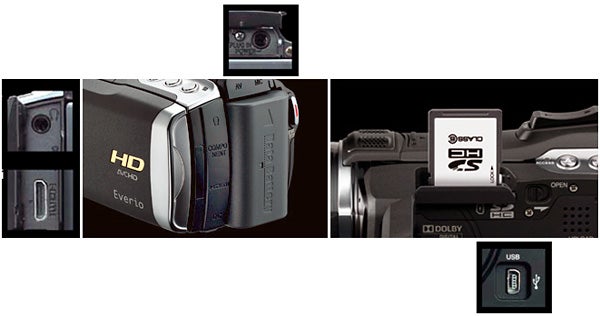 The user-configurable button, though, is very handy indeed. We would have liked to have seen manual audio control as one of the options. But it’s good to see high-end features like Focus Assist there, which fringes areas in focus with blue for easier control. The remaining settings require use of the main menu via the fussy Laser Touch Operation, which is controlled via a finger-sensitive strip down the edge of the LCD screen and is not very accurate. So it’s fortunate you won’t need it for everyday controls. There is a new option to be found there, however – sharpness. This isn’t the same as the extensive picture control offered by many Canon camcorders, but useful if you want to take out some of the artificial detail found in consumer-grade video.

With the HM400’s enthusiast orientation, it’s reassuring to find a standard-sized accessory shoe on offer. However, JVC has situated this on an external adapter, rather than directly on the camcorder body itself. A sliding cover on the top of the lens reveals a screw mount for the adapter, so the shoe sits high up. It’s a perfectly workable solution, but you have to remember the adapter (or leave it permanently attached), although if you’re not using it the camera is sleeker without it.


There are minijacks available for an external microphone and headphones, as well. Annoyingly, these are situated under different flaps at the back of the camcorder, so both flaps must be open when you use both ports at once. Video outputs are comprehensive, however, and include an A/V minijack for composite video connectivity, a proprietary component port, and mini HDMI. 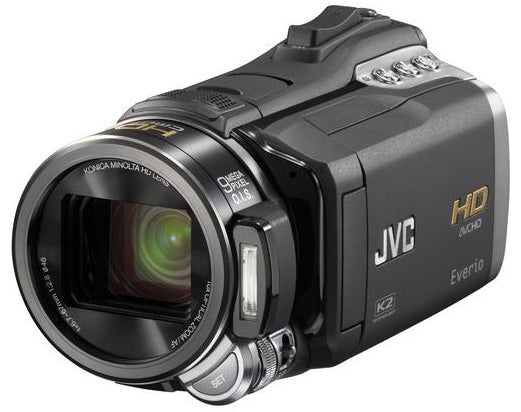 With its huge sensor, it’s no surprise that the HM400 can shoot extremely high quality footage. Both colour and detail are superb in good lighting. JVC has included its K2 Technology in this model to improve image processing, and this appears to have paid dividends. The HM400 outperforms the JVC Everio GZ-X900, although this is most noticeable in low light. Video remains bright at worse levels of illumination, with more colour retained and less noise. Nevertheless, the HM400 is still not quite up with the best models from Panasonic, Canon and Sony in low light. It performs well in most conditions, but there will be situations where models such as Panasonic’s HDC-TM300 can still pick up an acceptable image, but the HM400 might not.


The JVC Everio GZ-HM400 is an impressive return to the high-end for JVC after a year of absence. The level and ease of control is on par with the best of the competition, providing ample settings for the creative video enthusiast. The sub-£700 price is also very encouraging. Only the mediocre low light performance lets the side down. Otherwise, this is a capable, well-designed camcorder worthy of consideration if you’re serious about your videomaking.