JVC has frequently offered very competitive budget camcorders. The Everio GZ-MG330 and Everio GZ-HD300 combined decent image quality with a reasonable price, to make them tempting propositions. So the Everio GZ-HM30SEK has a heritage to live up to, but it takes a slightly different tack to its forebears.

At first glance, the specification is pretty unexciting. The HM30 (the SEK on the end refers to the silver model we tested, with a functionally identical black BEK version also available) is based around a rather run-of-the-mill 1/5.8in CMOS with 1.5Mpixels, which doesn’t even have the back-side illumination of JVC’s recent more premium models, such as the Everio GZ-HM650BEK. However, this sensor doesn’t need the 2 Mpixels of a Full HD camcorder because the HM30 uses the AVCHD Lite format instead. This captures at 720p instead or 1080p. The HM30 will output 1080/50p over its HDMI connection, but this is upconverted.

A selection of standard definition modes are available too, all operating at 720 x 576 pixels. However, no still image capture facility is included. Video is recorded exclusively to SD memory cards, with SDXC supported up to 64GB. A piece of media this size will be enough for 13 hours of footage at the top 720p setting, and nearly 48 hours of the lowest quality standard definition.

One advantage of a small sensor is that it allows a hefty optical zoom in a small camcorder body. The HM30 offers a sizeable factor of 40x, and when shooting standard definition, there are plenty of extra pixels available so JVC can offer a Dynamic Zoom as well. This crops into the CMOS sensor rather than blowing up the output signal, so you don’t lose resolution. However, a smaller area of the sensor is used, so there are implications for low light sensitivity. 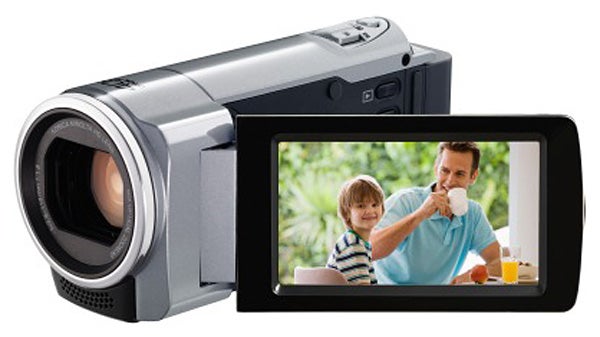 JVC also uses the extra pixels to provide a more powerful Advanced Image Stabiliser (AIS) option, which smoothes jerky camerawork a little more than the standard setting. However, this again crops into the frame a little more, which doesn’t affect zoom ratios but will marginally reduce performance in poor illumination. It’s also only effective when not heavily zoomed in, so best used for shooting when walking.

One area where budgets have been clearly snipped is in the control system. Many recent JVC models now use a touchscreen LCD, but the HM30 relies on a set of buttons. These are situated on the side of the device under the fold-out display panel. The buttons are all the same size and shape, and not easy to see when you’re looking at the screen. So this isn’t the easiest set of controls to use.

A button on the top of the camcorder switches between Intelligent Auto and Manual. In intelligent AUTO mode, there’s a face detection option available, which sets focus and exposure according to any faces detected. But otherwise the camcorder attempts to detect conditions and select an appropriate setting. The Gain Up option also lets you choose to increase gain or reduce shutter speed in low light conditions. You can enable a time lapse mode, which will grab a fame every one, two or five seconds.

Although the manual mode does increase the range of options, this doesn’t release a full complement of settings. There are scene modes available, but only two – Nightalive, which increases gain and enables a slower shutter speed, and Spotlight, which reduces the effects of overly bright lighting. You can focus manually, which is particularly fiddly with the HM30’s control system. There’s also a brightness setting with 13 steps from -6 to 6, but no option to alter iris or shutter independently. The White Balance control does give you the option to select fully manual, plus sunny, cloudy and halogen presets, but nothing for fluorescents. 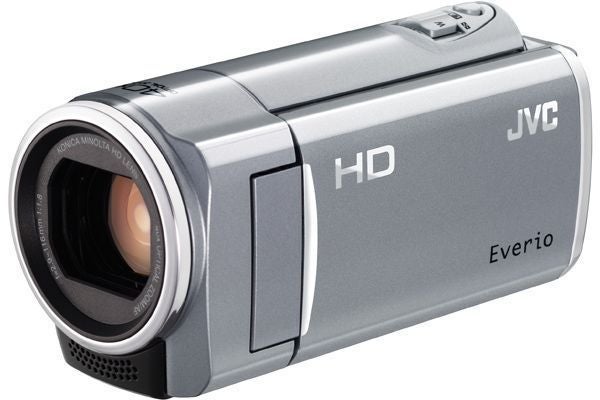 However, we wish the backlight compensation and tele macro settings weren’t buried in the menu. Although face detection can step in when shooting human subjects against a bright sky, if they’re looking at the camera, it’s always useful to be able to boost exposure where your subjects are being kept in the shadows by an overly luminous background.

Naturally, there are few provisions for the videomaking enthusiast. No accessory shoe is available, and no connections for attaching an external microphone or headphones. There is a mini HDMI port, which as we mentioned earlier will upscale the video to 1080/50p, if your TV supports it. However, the AV port only outputs composite analogue video, plus stereo RCA audio, not S-video or component HD.

In optimal conditions, the HM30 manages a good picture. It’s lacking resolution compared to Full HD alternatives, but colour is still relatively faithful. Contrast is dealt with well, too. Most surprising is the decent performance in low light, with a picture that managed to remain reasonably colourful in our 100W ceiling light test. The white balance system does have some trouble getting colours entirely accurate in mixed lighting conditions, but the image is at least bright and mostly devoid of grain. Overall, picture quality is a cut above pocket Internet camcorders.

JVC’s Everio GZ-HM30SEK is available for under £200, and considerably less than that from some vendors. It’s not a particularly exciting camcorder, but it does offer better image quality than 720p pocket Internet models, and a few more features. So if you’re after a little bit more than a Flip (may it rest in peace…) or its pretenders can offer, the GZ-HM30SEK is a decent-value alternative worth considering.