We were pleased to see JVC return its attention to the high end with the Everio GZ-HM400. Now this model has already been superseded, although the numerical reduction to GZ-HM1 would imply an earlier model. But the memorable number is warranted, as there are some notable improvements here.


One of the best features of the HM400 – the huge 1/2.3in sensor – remains the same, although the resolution has been upgraded from 10.3-megapixels to 10.6-megapixels. But even more significant is the switch to a backlit CMOS sensor. This is a technology which Sony calls Exmor, and is appearing in digital cameras now too. Instead of placing the sensor wiring in front of the pixel array, these are located behind, so more light can get through. Our previous encounters with backlit CMOS sensors have shown them to be very capable, particularly in low light.


The other significant enhancement is in image stabilisation, which is shaping up to be a key area of competition in 2010. JVC has added an Advanced mode to the HM1’s optical image stabilisation system, which allegedly quadruples the area covered. In our testing, the HM1’s Advanced mode was clearly more effective than the standard setting at smoothing out jerky camera work, with no obvious loss of image quality involved. 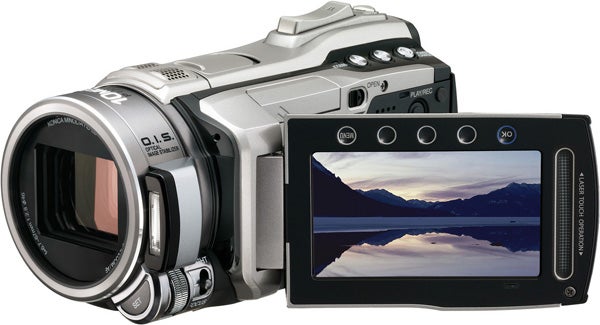 Apart from these two changes, however, the HM1 has virtually the same features as the HM400. This is no bad thing, as the HM400’s capabilities were already extensive. Leading the charge is a dial next to the lens. This doesn’t provide quite as much ease of use as a full lens ring, but it comes a pretty close second. A nearby switch toggles the function of the dial between manual focusing and exposure. The SET button on the front stores your configuration. Whilst the dial won’t make rack focusing easy, it does facilitate fine adjustment compared to joystick-based systems.


The dial has other functions, too, when used in tandem with the three buttons on the top of camcorder body. Two of these provide immediate access to the aperture and shutter priority modes, with the dial used to alter the respective values – or the HM1’s Laser Touch Operation strip on the left of its LCD. The third button is user configurable, with options including scene modes, white balance, toggling the focus assist system, backlight compensation, and a host of settings related to the HM1’s still image mode.


The touch-sensitive buttons and Laser Touch Operation strip provide direct access to yet more functions. You can cycle through the three different image stabilisation options (including off), and JVC has sensibly included extra controls for toggling record and operating the zoom. This will facilitate two-handed shooting, although the main zoom is large and the record button comfortably placed for the more traditional HandyCam posture.

The remaining options can be found in the full menu, which again is operated via the Laser Touch Operation strip and LCD panel buttons. Here you can toggle face detection and JVC’s event registration system, where clips can be assigned tags to aid organisation. A selection of more fun-oriented shooting modes are also provided. High-speed footage can be captured at 100 frames/sec, 250 frames/sec, and 500 frames/sec, although resolutions drop to 480 x 270, 480 x 116, and 640 x 72 pixels respectively. You’re also limited to under five seconds of shooting in each case, and under three with the fastest option.


There’s a Time Lapse option as well, which records a frame at intervals ranging from one to 80 seconds. This mode is best employed alongside the external adapter, but is ideal for capturing the motion of clouds, or even plants growing, as the duration of time-lapse recordings is only constrained by the amount of storage available. 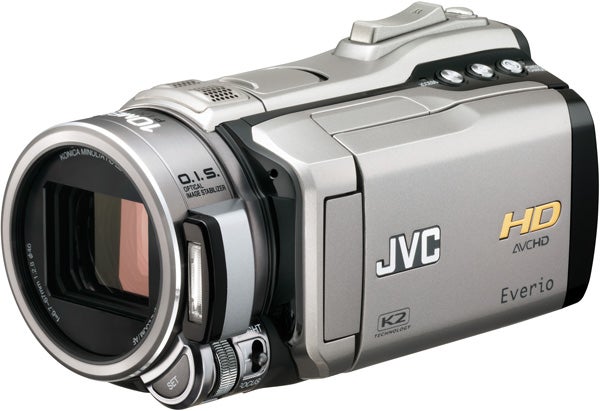 Delving deeper into the menu will reveal there’s even a control for sharpness and a zebra option, both of which will be popular with pro users. Less welcome will be the fact that the menu is also the only place to adjust audio manually, and there’s no progressive shooting mode available, either.


The HM1 has all the requisite physical features. An accessory shoe isn’t built in directly, but there’s an adapter included that screws into a port hidden beneath a sliding door on the top. Flaps on the rear cover minijacks for headphones and an external microphone. Video is recorded in AVCHD format, at data rates up to 24Mbits/sec. Like the HM400, the HM1 integrates 64GB of flash Memory, with an SDHC slot also available for expansion. But you’re unlikely to need it, as even at the top quality setting there’s enough storage for nearly six hours of footage.


The huge CMOS sensor employed by the HM400 already provided excellent image quality in good lighting, and the HM1’s backlit version is no different. Colours are vibrant but realistically saturated, the level of detail is high, and the autofocus and exposure systems cope quickly with rapid changes in conditions or framing. But it’s the HM1’s performance in low light which is the real revelation, and a noticeable leap forward compared to the HM400. The backlit CMOS sensor has clearly paid dividends here. Not only is the image brighter, but there is almost no sign of grain until illumination drops to a very low level. This was the HM400’s most significant bugbear, and with the HM1 JVC has not only made improvements, but brought performance up to a level on par or better than every other consumer-grade HD camcorder currently on the market.


We already liked JVC’s Everio GZ-HM400 quite a lot, and the GZ-HM1 improves on it in a couple of important areas. With class-leading low light performance, competitive image stabilisation and a great set of features for the enthusiast, this is a capable camcorder which could even appeal to the semi-professional user. However, like its predecessor, its main downside is its price. At over £1,100, it’s at least £300 more than Panasonic’s similarly able HDC-TM700. So although the HM1 is an excellent bit of kit, it’s up against cheaper alternatives which are equally accomplished.