Sony’s tape-based HDV models kicked off the move to high-definition camcorders, but now that format seems to be settling into the semi-professional realm. Instead, Sony and Panasonic have opted for a new H.264-based format called AVCHD for their latest consumer-oriented HD camcorders. JVC, however, is not part of the club. So this month’s GZ-HD7E eschews trendy MPEG-4 in favour of good old-fashioned MPEG-2, as does HDV. 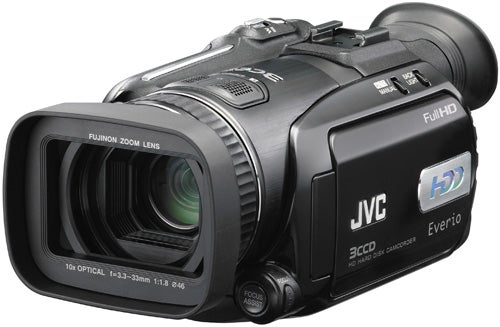 But that’s not the only difference between JVC’s new baby and Sony’s latest models. The GZ-HD7E is in the unique position of being the only consumer camcorder to record what JVC calls ‘Full HD’. Where the highest-resolution version of HDV only operates at 1,440 x 1,080, the GZ-HD7E can capture at up to 1,920 x 1,080, although it still uses field-based interlacing so the Full HD name is a little misleading. Ironically, JVC’s professional HD camcorders are in the other HDV camp – they record in the progressive 720p mode, where frames are 1,280 x 720 with no fields.


As with JVC’s other Everios, the GZ-HD7E uses a hard disk for recording – in this case a substantial 60GB in capacity. Even in Full HD High Quality mode, this is enough for five hours of footage. You get the same amount of time out of the 1,440 x 1,080 Constant Bit Rate (1440CBR) mode, but seven hours from SP mode, which is also at 1,440 x 1,080 but with higher compression. The GZ-HD7E doesn’t have any non-high definition recording modes. I guess spending a grand on a HD camcorder and then not using its full resolution would be a bit of a waste, but having that option available would have been handy. 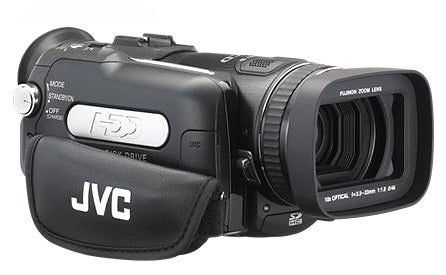 The imaging system consists of a trio of CCDs, not the CMOSes now gaining favour with Sony and Canon. However, these are relatively small at 1/5in and each one only has 570,000 pixels – you would need four times that for true HD resolution. So to bump up the resolution JVC uses its pixel-shifting technology, whereby the green chip is offset by half a pixel in the X and Y direction. JVC calls upon Fujinon mounting technology to ensure the prism and CCD line up correctly, which until now has only been found in professional models.

As you would hope for a camcorder this expensive, the GZ-HD7E is replete with manual features, the pinnacle of which is the manual focus ring. This is allied with a Focus Assist button that helps you produce pin-sharp manual focus. On the rear of the body, separate buttons are available for aperture and shutter priority modes. The aperture can be varied from F1.8 to F8 and the shutter from ½ to 1/4000 sec. There’s a brightness button, too, which lets you vary gain from -6 to +6. The joystick on the LCD then provides access to the five Programme Auto-Exposure modes, including portrait, sports, snow, spotlight and twilight. In tandem with the function button, this also operates the four digital effects; tele macro mode, zebra, and sharpness. It can even call up colour bars. 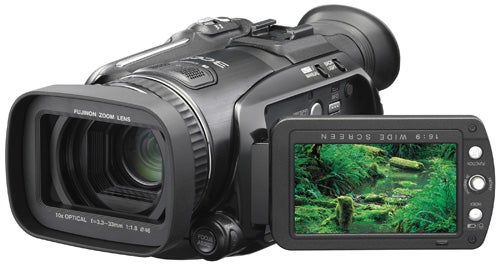 Sadly, although the GZ-HD7E has a microphone minijack input and standard accessory shoe, it lacks a headphone jack – so you won’t be able to monitor your audio. But since no manual sound level control is provided either, this is a bit of a moot point. You would only be able to check if levels are loud enough – not do anything about them if they’re not.


So those are the facts and figures. But just offering lots of pixels is only half the story, particularly now there are plenty of HD camcorders to choose from. Image performance and the effects of the MPEG-2 compression are more important. In optimal daylight, colours were bright and saturated (perhaps too saturated). There was also a hint of grain. Under good artificial lighting conditions, we found it still provided impressive colour fidelity thanks to an effective Automatic Gain Control (AGC), but there was quite a lot of noise present. 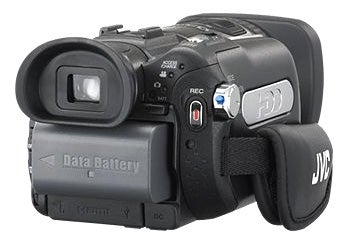 Overall, the GZ-HD7E acquitted itself well for its intended market. On the plus side, the worst noise and artefacting we’ve seen with AVCHD-based camcorders wasn’t evident with the JVC. However, we did see more trailing in motion than with HDV-based competitors such as Sony’s HDR-HC3E. So, for more discerning consumers and semi-professionals, JVC’s MPEG-2-based recording format can’t quite compete with HDV, despite the higher resolution.

When AVCHD camcorders first arrived, their gadget credibility was high but they had one gotcha which made early adoption a somewhat silly idea: it was impossible to edit the video format natively with any existing software. Since then, Ulead Video Studio 11 Plus and Pinnacle Studio Plus Version 11 have added editing support for the format, and it’s likely other mainstream apps will soon follow suit. So what about the GZ-HD7E’s connectivity? Unlike most of Sony’s HDD camcorders, it does have FireWire (i.Link) as well as USB ports. It also offers HDMI, for connection to HDTVs, and component analog – but no S-video.


However, we had enormous trouble finding a way to get the footage onto a PC for editing. JVC supplies Cyberlink’s BD Solution, which consists of PowerDirector 5 NE Express for editing, PowerProducer 3 NE for authoring to disc, and PowerCinema for playback. As the BD in the name suggests, you can use the Cyberlink software to burn Blu-ray assuming you have an appropriate burner. Since the GZ-HD7E is aimed at consumers, you can also get a Share Station for around £300. This is a docking station for burning your video straight to DVD, avoiding the problem of PC editing altogether. 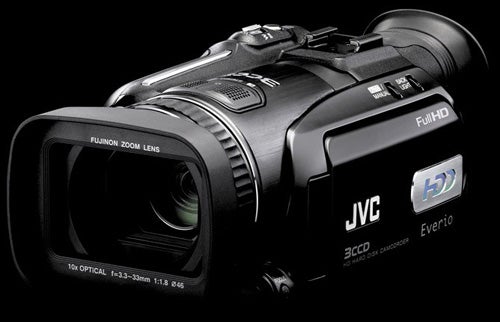 The unit is detected when connected via FireWire as either an HDV or DV camcorder, depending on whether it’s set to DV downscaling or not. However, no software we tried could actually capture video in this way. Instead, we resorted to the USB link, from which the JVC can be accessed as an external drive in Windows, and found that the files have MOI and TOD extensions – a bit of a flashback to the MOD files of the standard definition Everios. We tried renaming TOD to MPG and were able to play the files in Windows Media Player, but still had no joy editing them with Ulead Video Studio or Adobe Premiere. Only Cyberlink’s PowerDirector could import the TOD files (or our renamed MPGs) and edit them. The TOD files were automatically converted and copied to another location, when opened directly from the camcorder’s hard disk.


The JVC GZ-HD7E is close to what a lot of people have been looking for – a high definition camcorder which looks to the future and ditches tapes in favour of the convenience of hard disk storage. But unfortunately, as with the AVCHD camcorders when they first came out, JVC has forgotten something important: editing. This isn’t entirely JVC’s fault, and at least the Cyberlink software supplied does the job. But if you wanted to use this camcorder for video editing more elaborate than PowerDirector can provide, you will currently be disappointed.


Overall, JVC’s GZ-HD7E is a very capable camcorder but until more applications support editing, its output will remain one for the gadget-hungry consumer rather than more serious enthusiasts.