The switch to HD camcorders has been accompanied by a switch in compression systems. Just as Blu-ray discs have looked towards more advanced codecs than the MPEG-2 used by video DVDs, mainstream HD camcorders have almost universally moved over to different flavours of AVCHD, which is based on MPEG-4 AVC, or H.264 as it is usually known. Except JVC, that is, which resolutely stuck it out with MPEG-2. With the release of the Everio GZ-HD10, however, JVC finally joined the H.264 party.


JVC hasn?t thrown in the towel entirely with MPEG-2 just yet, though. Alongside the GZ-HD10, the company has also released the more fully featured GZ-HD40, which we have here. The HD40 sports JVC?s latest Gigabrid image processor, which supports both MPEG-2 and H.264, and in this case the camcorder can record to either format. JVC has also launched a GZ-HD30 model, which has similar features but is exclusively available through the Dixons/Currys group.


JVC?s latest camcorders also signal another change for JVC. Whilst previously the company relied on CCD sensors, using the traditional three-sensor approach for higher-end camcorders, the new models switch to a single CMOS sensor. In the HD40?s case, this is a single 1/3in CMOS with 2.68-megapixels, which is on par with Canon and Sony?s best offerings. It can also take still images at 2,432 x 1,368 pixels. 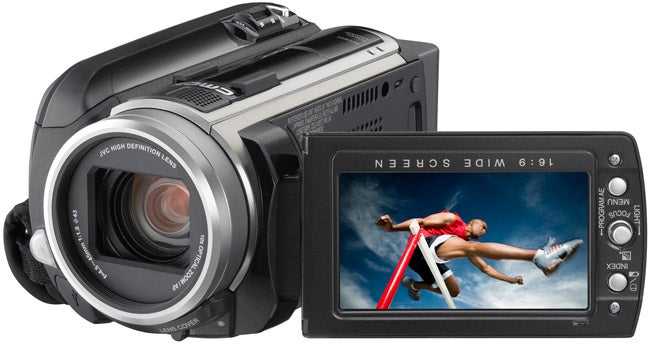 
JVC was the first manufacturer to offer camcorders with hard disks for storage, and the HD40 continues this tradition with a hefty 120GB unit. This is enough for a massive 15 hours of AVCHD footage even in XP mode, or 10 hours of MPEG-2. The HD30 variant only has an 80GB unit, so has two-thirds the capacity. The HD40?s MicroSD slot can also be used for recording video, but only in AVCHD mode. An 8GB card is enough for an hour of XP footage.

JVC camcorders usually have a healthy selection of manual settings available, but they don’t make them a doddle to access. Fortunately, in the HD40’s case JVC has chosen not to include its funky but fiddly Laser Touch Operation system, as seen on the Everio GZ-MG330 and MS100. Instead, a regular joystick can be found on the edge of the LCD. However, you will still need to delve into the second layer of the menu under Manual Setting to adjust things.


But at least there is a wealth of options. The Brightness function combines iris and gain into one setting with 13 steps. An aperture priority mode is also available, but this only offers F-stops from F1.8 to F8, which is rather a narrow band. There is separate Shutter control offering variation from ½ to 1/4000th of a second, but this is actually also a priority mode, so overrides any aperture settings made.


Annoyingly, JVC hasn’t included the lens ring which made the GZ-HD7 such a strong enthusiast contender. Instead, the joystick on the LCD edge is employed – simply pull this down once to engage manual focusing. At least the excellent Focus Assist system is available. This switches the LCD preview to monochrome and colours the areas currently in focus as you make adjustments. You can choose between green, red or blue according to preference.

There is a full-sized accessory shoe, but it sits under a removable piece of plastic that you will almost certainly lose eventually, so is best left in the box. Microphone and headphone minijacks are provided, too, along with the ability to adjust external mic levels.


Although traditional wisdom has it that three sensor chips are better than one, this is assuming the sensors are the same size for both cases. In consumer camcorders, one large chip can often perform better than three smaller ones, as revealed by Sony and Canon’s premium HD camcorder strategies. Now JVC has followed suit, and it appears to be a step in the right direction. Although the HD40’s most recent predecessor, the GZ-HD6, produces great colour, the HD40’s footage is clearly sharper, particular in FHD mode. In optimal lighting, it’s almost as good as Canon’s HF10 and HF100, and comparable to Sony’s HDR-SR12.


In good artificial lighting, the HD40 still maintains its excellent colour, although there is a little more noise evident. Footage, again, looks a lot better than JVC predecessors, and in fact brighter than Canon’s HF10. But the noise is slightly more obvious. In lower light, the HD40’s footage is still brighter than the HF10’s, although again slightly noisier, and clearly ahead of Sony’s SR12. It’s a marked improvement over the HD6, which produces a much darker image in comparable conditions. So overall the HD40 can take a place alongside the best HD camcorders released in 2008 for image quality.

Perhaps one of JVC’s reasons for taking the, ‘if you can’t beat ‘em, join ‘em’ route with AVCHD, is editing compatibility. The TOD files produced by the company’s MPEG-2-based HD camcorders are still not widely supported, but virtually all editing apps have versions that can cope with AVCHD, bar Adobe’s. So now, you can safely import your HD40 files into Ulead VideoStudio, Pinnacle Studio, or CyberLink PowerDirector and edit away. We tried the latest versions of all three, but only the Pinnacle and Cyberlink software could cope with the files. 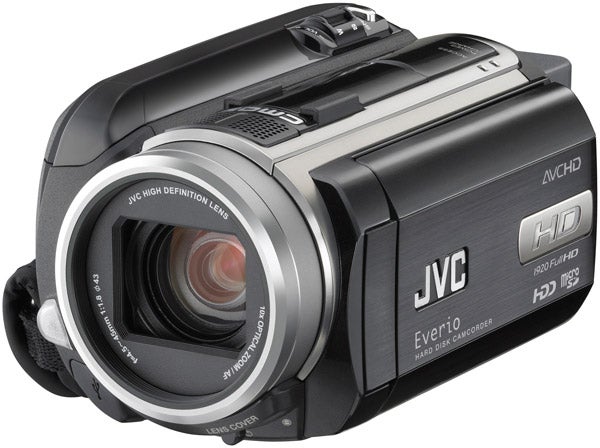 The 1440 CBR MPEG-2 mode is essentially HDV, so the most likely to be compatible with editing software. In the past, we’ve found that JVC’s FHD MPEG-2 mode is a little less likely to work, but the latest versions of both Pinnacle Studio and Ulead VideoStudio are compatible.


If you just want to watch your footage on a TV, a full-sized HDMI port is available. This is v1.3 compliant, so supports Deep Color with a compatible TV or projector, and can also output 1080p. Alternatively, there’s a proprietary connection for analogue component, and a minijack for composite video and RCA audio. A docking station is also supplied, which replicates the analogue video connections, plus the USB 2.0 and DC power ports, and adds FireWire.


The Everio GZ-HD40 is a very strong entry, and on pure quality and features really puts JVC on par with Canon and Sony, with a few niggles such as the lack of a lens ring. However, its price is a drawback. At nearly £1,000, the HD40 is significantly more expensive than Canon’s HF10 or HF100, which still get our nod as the best AVCHD choices in 2008. Fortunately, the HD30 variant offers identical quality and features, apart from the smaller 80GB hard disk and lack of a docking station. As that is available for £645, over £300 less than the HD40, it makes the much better choice – and the best value hard disk-based AVCHD camcorder currently available.