JVC has always been a little different from the other big brands in the camcorder business. The company struck out alone with hard disk-based camcorders for consumers when it launched the Everio range around three years ago. Although Sony and Canon have now emulated JVC with their own hard disk models since then, JVC is differentiating itself again in the move to HD. Instead of adopting AVCHD, JVC is sticking with MPEG-2.


The Everio GZ-HD3EK is JVC’s second consumer HD camcorder, coming in as baby brother to the GZ-HD7E. It’s still a premium model, with a similar basic specification. But it’s also smaller, lighter, cheaper – and it doesn’t shoot Full HD at 1,920 x 1,080. Instead, the maximum video resolution is 1,440 x 1,080, the same as HDV. 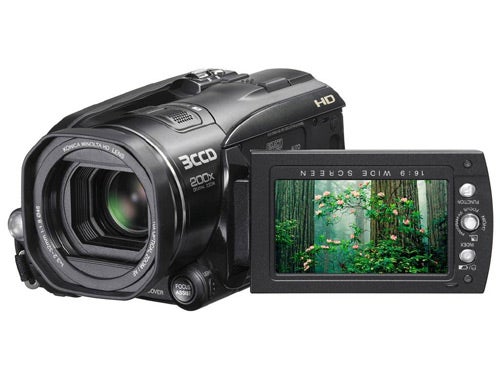 At the heart of the HD3 is the same trio of 1/5in CCDs as the HD7, each with 570Kpixels. These are native 16:9 chips, too, and the maximum still image resolution remains 1,920 x 1,080 pixels. However, with its more affordable aspirations, the HD3 has a Konica Minolta lens rather than the Fujinon Professional aspherical one, and JVC has switched to an electronic image stabiliser rather than the optical one on the HD7.


Without the top Full HD mode, the HD3’s highest video mode is XP. This records at 1,440 x 1,080, but with the same 26.6Mbits/sec data rate of Full HD. This is considerably higher than AVCHD camcorders use, although the MPEG-2 compression favoured by JVC is less efficient than the MPEG-4 AVC of AVCHD. Even more significantly, the data rate is higher than HDV, which also uses MPEG-2.


The HD3 has a 60GB hard disk built in, again the same as the HD7, which is enough for five hours of recording in XP mode. There are two other recording modes on offer – a 1440CBR mode with the same data rate as XP but using a constant data rate for greater compatibility. The SP mode reduces data rate to 19Mbits/sec, allowing you to fit seven hours on the built-in hard disk.

Although the HD3 is the lower-end member of the Everio HD range, JVC still hasn’t skimped on hobbyist features. There’s a mini-jack for connecting an external microphone, and a standard accessory shoe, although no headphone socket is available. The major missing feature is the HD7’s manual focus ring, so you now have to enter the menu to perform this task, but the Focus Assist button is still available. Instead of being able to adjust shutter and aperture separately, the HD3 only has priority modes, where you can have one or the other, but not both at the same time. Shutter speeds range from ½ to 1/4000, and aperture from F1.8 to F8, yet again the same as the HD7. You can add + or -6 exposure on the top, too, independently of aperture. 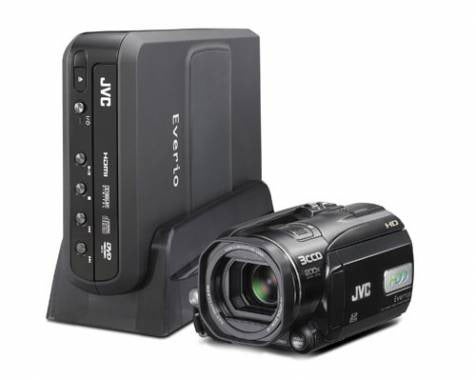 The HD3 offers the usual program auto-exposure modes, including Twilight, Portrait, Sports, Snow and Spotlight – all accessed via the menu. It’s also possible to engage + or -5 levels of sharpness. But we found that pushing this too far either way had a detrimental rather than positive effect on image quality. The HD3 has a few other handy features, which will be welcomed by point-and-shoot users. The built in video light has its own separate button, and the integrated lens cover operates via a solid slider on the bottom of the lens.


Despite its higher bit rate, the HD3 still didn’t quite match the best we’ve seen from HDV for video quality, such as Canon’s HV20. But its performance was still ahead of any AVCHD camcorder we’ve tested. In bright sunlit conditions, the HD3 provided well saturated overall colour, although it did have a slightly warm look, particularly with skin.

Indoors, the colour was similarly decent, but with a slightly greenish tinge we couldn’t white balance out. Whites were also a little too bright. But most consumers will be more than satisfied with the performance. In worse artificial lighting, the HD3 still did well, although there was a little more noise evident than with a high-quality HDV camcorder like the Canon HV20. The image also became quite dark with poorer lighting, although a reasonable amount of colour was maintained. This can be improved by using the manual controls to set the shutter at 1/30th .


From our testing, the HD7 was better in poor illumination, maintaining better colour with less grain at lower lighting levels. But the HD3 was on par with most camcorders in its price range. We were also surprised at how well the electronic image stabiliser coped with motion. Although it didn’t smooth out mild motion as well as the HD7, it was just as good when things got a little more shaky. 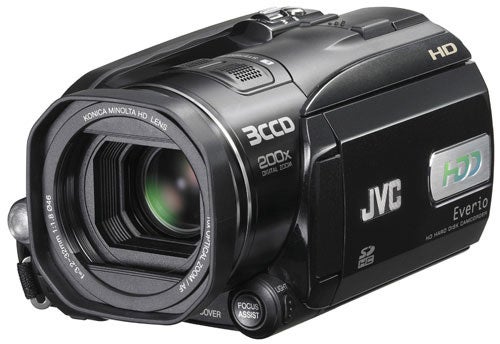 So, overall, the HD3 is not quite as good as the HD7 for image quality, but it’s close enough to fit the lower price. With better performance than AVCHD, the story’s looking good so far for JVC. However, our bugbear with the HD7 remains – editing the footage once you’ve shot it. Cyberlink’s BD Solution is bundled to take care of this, and the copy of PowerDirector included in this suite is the only software we’ve found which will actually import and edit the TOD files the camcorder records on its hard disk.


You could, of course, record the video over the analogue component link with an editing system capable of capturing HD video from this kind of source, such as Matrox’s RT.X2. Alternatively, there’s HDMI built in for watching your footage on a HDTV or capturing using Black Magic’s Intensity. But if you want the native files we’ve found the USB port is the only way to get to them. There is a FireWire port as well, but we weren’t able to capture video using this. Both S-Video, and an A/V port combining composite video and RCA audio connections, are also available.


Although the HD3 has the same electronic basis as the HD7, it is clearly a lesser model in terms of manual features and video quality. It lacks the flagship Full HD mode, too. But it’s also quite a bit cheaper. It undercuts our favourite hard disk HD camcorder, Sony’s HDR-SR8E by over £100, yet beats it slightly on video quality. For now, the lack of editing support still counts against JVC. Once the curious TOD files are supported by mainstream software, though, the HD3 is going to be a real contender.