JVC’s Everio GZ-MG330 was one of the camcorder successes of 2008. Combining real camcorder abilities with hard disk recording for under £300 proved to be a market-winning formula. But as 2009 draws on, and even pocket Internet camcorders go HD, there is clearly room for a similarly potent but pocket-friendly model in high definition. So now we have the GZ-HD300. It’s only 10g heavier than the MG330, a mere millimetre wider, and also comes in a choice of colours, in this case red, black or blue (denoted by the last three letters after the 300). 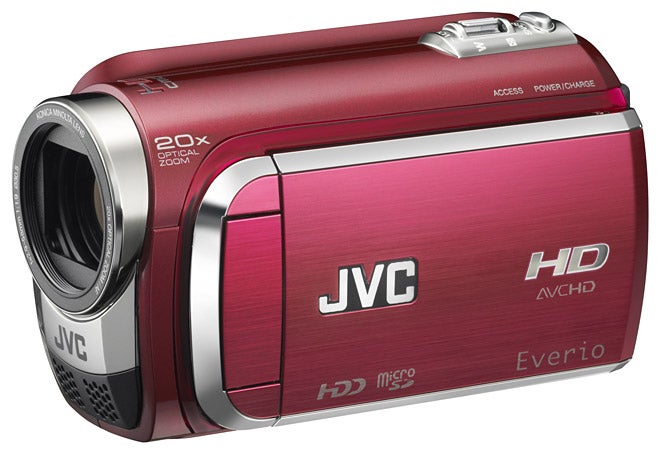 Video is recorded to a 60GB hard disk, and as with the HD10 only the AVCHD format is offered, not the quirky MPEG-2 option JVC favoured until the previous generation. However, JVC has now followed Canon’s lead and added support for High Profile, Level 4.1. So now the top data rate is 24Mbits/sec. Even at this setting, you can store 5.5 hours of footage, and this rises to over 27 hours in the lowest quality mode. On the downside, there is no progressive option, so all quality settings are interlaced.


Unlike the two previous models, JVC has kept the enthusiast-oriented features to a minimum. The sleek coloured body has no accessory shoe or minijacks for microphone and headphone. The menu control system has switched to JVC’s consumer-oriented ‘Laser Touch Operation’, too. This provides a bar to the side of the 2.7in LCD which you stroke with a finger up and down to navigate options. It then glows blue in sympathy with your caresses. We found this system did take some getting used to, however, making us regularly overshoot menu options.

Overall, though, the HD300 is meant to be used in automatic mode most of the time. Face detection has been added, so the camera will automatically set exposure according to any human phizogs it picks up. But as with other implementations this isn’t a perfect system, and it struggled to lock onto shadowed faces when the background was significantly brighter than the intended subject matter.

The menu system does still provide JVC’s usual array of manual options. Shutter speeds can be varied between ½ and 1/4000th, but no specific aperture control is available, just a generic Brightness with steps from -6 to +6. The two can at least be configured independently. However, with these options buried in the menu you won’t want to use them that often, which will also be true of the manual focusing. An assist function is included, which temporarily renders the image monochromatic and adds blue edges to objects in focus. Nevertheless, the Laser Touch Operation makes manual focusing a rather fiddly and unrewarding experience. 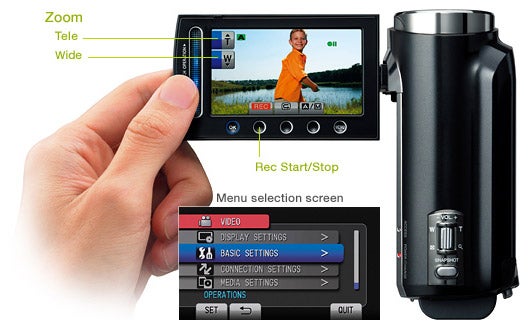 Other configuration options include x.v.Color, with HDMI 1.3 support so you can see the results on a compatible TV or projector. JVC bundles its event registration system, so you can tag footage to group it together. The HD300 has a rather healthy 20x optical zoom, and an automatic cover protects the optics, although the image stabilisation is of the digital variety, not optical. We particularly like the integrated cord, which can either be used to dangle the camcorder from your wrist, or to adjust the securing strap for comfy one-hand operation.


Considering its single quarter-inch CMOS sensor, the HD300 promises neither top-of-the-range nor entry-level video performance. In good lighting, video shows plenty of fine detail and accurate colour. With the 24Mbits/sec data rate enabled, there is little sign of compression artefacts either. Overall, in optimal conditions the HD300 provides performance which belies its diminutive size, and isn’t significantly behind premium alternatives. 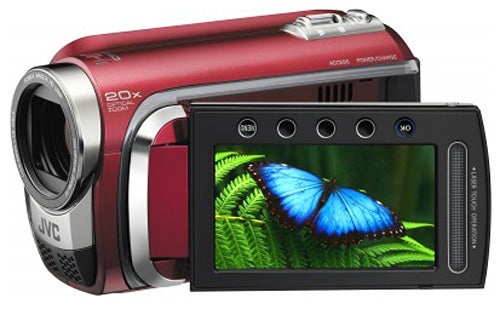 Low light performance can’t compete with higher-end full-sized models sporting larger sensors, however, such as those in Canon’s range or the Panasonic HDC-HS300. Nevertheless, it is better than we expected from a camcorder of this size, and underlines where Panasonic went wrong with the HDC-HS20. Although grain does appear as the lighting level drops, JVC has managed to keep it fine and monochromatic, so footage remains more usable than the HS20’s. The auto white balance also maintains accuracy, avoiding the colour cast so frequently evident of budget camcorders using small sensors. Footage is fuzzier in low light, but overall performance is noticeably better than the HS20.

Since the AVCHD format is used for recording, editing footage from the HD300 is unproblematic. Virtually all consumer and professional software now provides support for AVCHD, and we encountered no difficulties with any application we tried, even when editing the 24Mbits/sec footage. 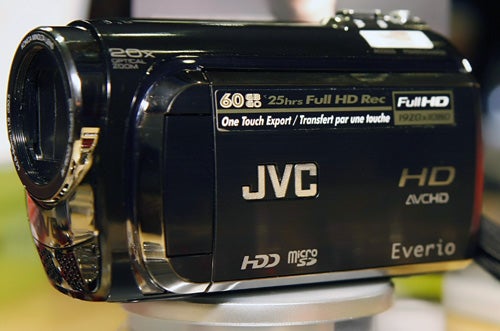 The HD300 incorporates mini HDMI, plus connections for component and composite analogue. However, only cables for the latter two are included in the box. To watch your HD movies in all their digital glory on your HDTV, you will need to supply your own adapter to convert mini to regular HDMI. The video can then be output as 1080/50p, with a compatible TV. JVC has also integrated buttons for One Touch operations, which speed up PC connection and allow you to burn footage straight to disc.


The JVC Everio GZ-HD300, like other Everios before it, is a bit of a maverick. Although a number of the smaller camcorder manufacturers have attempted to shoehorn HD video quality into a pocket-friendly format, only Sony’s HDR-TG3 has come close to getting the balance right. But JVC achieves superior image quality and adds over five hours of storage in a still very compact package.


It sounds like the same winning combination as the MG330, but there is one catch: this camcorder currently costs £700. So Panasonic’s HDC-SD9 offers much better value, and Canon’s HF100 superior image quality for less as well. The GZ-HD300 is clearly a well thought out pocketable camcorder, but it’s a little too pricey at the moment to reap quite the same success as its MG330 inspiration. If prices drop to £500 or below, though, it will be a very tempting proposition indeed