The AVCHD format is fast becoming the standard for HD camcorders. With the release of the Everio GZ-HD40, HD30 and HD10, JVC has finally jumped on the bandwagon. But where the HD40 and HD30 still hedge their bets by offering MPEG-2 compression as well, the Everio GZ-HD10, released at the same time, goes all the way. It only offers AVCHD, and it also misses out on the Full HD resolution offered by its bigger brothers.


The HD10, again like the other new additions, also relies on a CMOS sensor rather than JVC’s usual trio of 1/5in CCDs for its HD models. In this case, it’s a 1/4.5in sensor with an effective 1.84-megapixels, and in fact only 0.95-megapixels are used for video – which is less than the native resolution of the video format used. The HD10 records AVCHD, but at the 1,440 x 1,080 resolution variety of HDV and the first AVCHD camcorders. Stills can be captured at up to 1,920 x 1,080, but here again the camcorder is using only 1.55-megapixels. So in all cases interpolation is being employed to make up the difference. A 10x optical zoom is available, or you can add 200x digital zoom, and a manually operated shutter is used to protect the lens. 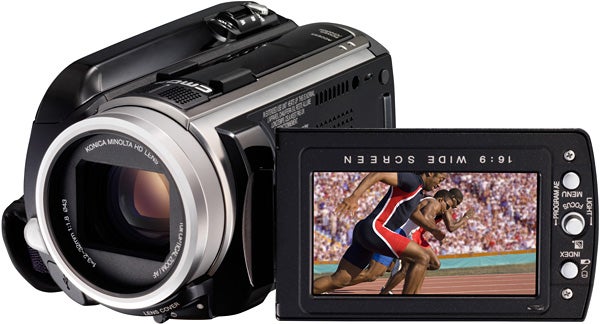 Three recording modes are available, all using 1,440 x 1,080 and interlaced fields. The top XP option records at a healthy 17Mbits/sec, currently the fastest data rate available in any AVCHD camcorder, and matching the top options from Canon’s HF10 and HF100, or Panasonic’s HDC-SD9 and HS9. Below that, there are 12Mbits/sec SP and 5Mbits/sec EP modes. A 40GB hard disk is used for storage, which is enough for a healthy five hours of footage even in XP mode, and 16 hours in EP. There’s a microSD slot available as well, which can be used for both still image and video recording.


Although the HD10 is aimed lower than the other new members of the range, it still has a few features for the enthusiast. A standard-sized accessory shoe is available. However, this is covered by a plastic panel, which isn’t secured and simply comes off, so you will either lose it or leave it permanently in the box. A minijack is available for a plug-in microphone, and you can even control the audio levels manually from +2 or -2. However, since there is no headphone jack you won’t be able to monitor the audio to check for unwanted buzz or background noise.

Menus are navigated using the joystick on the edge of the LCD. In automatic mode, pushing this joystick right turns on the LED video light, which is handy in complete darkness although not exactly powerful. But switch to manual and more options emerge. Pushing the joystick right calls up a ring of Program Auto-Exposure modes that include Sports, Snow, Spotlight, and Twilight. Pushing up toggles Backlight Compensation and also lets you shift the position of the auto focus concentration. Push the joystick down to enable manual focusing, which would be fiddly if it weren’t also possible to toggle JVC’s focus assist system that paints everything in focus with a bright colour.

Further options are buried in the full menu. There’s a Brightness control that bundles exposure and gain into one setting ranging from -6 to +6; shutter speed can also be set manually from 1/15th to 1/4000th of a second; and you can adjust sharpness from -5 to +5. Elsewhere, JVC’s Register Event system is available, so you can tag your videos with a label to aid finding them again – handy in a camcorder with room for 5 hours of footage. Like JVC’s other recent HD camcorders, the HD10 also offers x.v.Color for an expanded gamut, although this is only really applicable to compatible HDTVs and projectors. 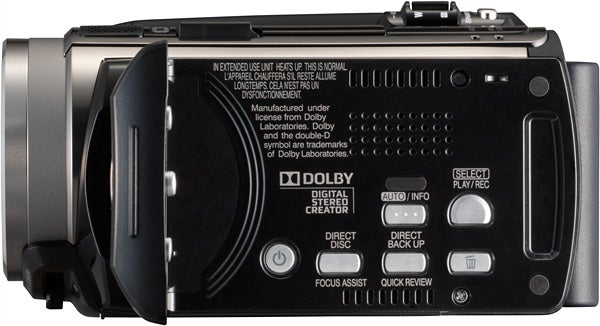 Canon and Sony have shown that a single large CMOS sensor can usually perform better with HD than a trio of smaller CCD sensors. The HD10’s single CMOS sensor is larger than predecessors such as the GZ-HD6’s 1/5in CCDs. But not much larger. As a result, low light performance was quite disappointing. The image kept a fair amount of detail as the light levels dropped, but colours washed out and gained an orange tinge. Fortunately, the HD10 fared considerably better in good lighting, and provided a much more competitive image. Overall, though, performance was on par with Sony’s HDR-TG3 rather than vying with the likes of Canon’s HF10.

As the HD10 records exclusively in the AVCHD format, editing footage is far less problematic than with JVC’s previous MPEG-2-only models, such as the Everio GZ-HD6. A USB 2.0 port lurks beneath the lens for connecting to a PC or Mac. We had no problems editing the HD10’s footage with Pinnacle Studio Plus 12 and CyberLink PowerDirector 7, but Ulead VideoStudio 11 Plus crashed when we tried importing the files, and Adobe apps of course don’t support AVCHD at all. JVC supplies the Cyberlink BD Solution bundle, which includes PowerDirector and the ability to burn your AVCHD footage to Blu-ray, if you happen to have the appropriate writer installed in your computer. 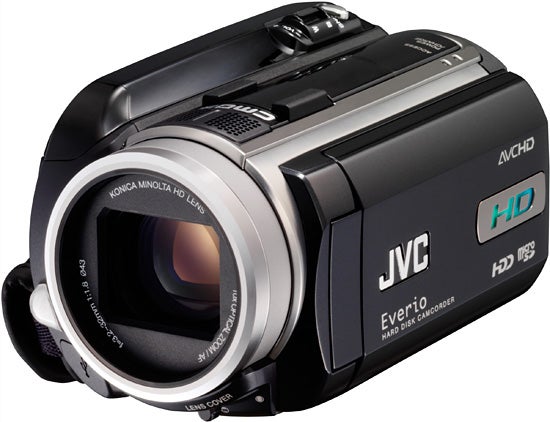 If you want to watch your recordings directly on a TV, the HD10 offers a comprehensive set of options. For HDTVs, there’s a full-sized HDMI port for direct digital connection. It’s HDMI 1.3 compliant, too, so supports the transmission of x.v.Color. There is also a proprietary socket for component analogue. Alternatively, the AV minijack offers composite analogue video and stereo RCA audio connectivity, but no S-Video.


Although the use of a CMOS sensor in the Everio GZ-HD10 brings JVC in line with Sony and Canon, its small size makes this a rather middle-of-the-road model. Thanks to the small CMOS, low light performance isn’t so competitive, yet its price puts it in direct competition with Canon’s excellent HF10 and HF100 models. The HF10 costs a little more, and only has 16GB of flash memory compared to the HD10’s 40GB hard disk. But its image quality is significantly better, and it wins out on enthusiast features too. So although the HD10 has plenty to commend it, we’d still prefer spending a tad more on the Canon HF10, or about the same on the HF100 and a couple of 16GB SDHC cards.