So far, consumer 3D camcorders have generally hedged their bets by providing the third dimension as an addition to otherwise essentially 2D models. Panasonic’s HDC-T750 came with an attachment, and this is now just an optional extra for the HDC-TM900 and HDC-SD90. JVC, however, has decided not to do 3D by halves. The Everio GS-TD1 does shoot 2D if you want, but its primary focus is 3D, with hardware specification arranged accordingly.

You may have noticed that human beings have two separate eyes, rather than two lenses feeding a single eye. Yet the latter has been the approach taken by previous consumer 3D camcorders, with just a single sensor fed by a dual-lens arrangement. The GS-TD1, in contrast, has two parallel optical systems. There are twin lenses feeding a pair of 1/4.1in back-illuminated CMOS sensors, each with 3.32Mpixels.

This setup gives the GS-TD1 an important set of features that the Panasonic offerings lack. First, there’s no need for calibration as the 3D lens is permanently attached, so you’re always ready to shoot as soon as the device is powered up. Second, and perhaps more significantly, the twin lenses mean you can actually zoom in 3D mode. There is only a 5x factor available when shooting 3D, which is still a little miserly, but this extends to 10x in 2D mode. Even 5x is preferable to the fixed framing offered by Panasonic’s consumer 3D models so far.

The final benefit of JVC’s dual approach is that the GS-TD1 doesn’t natively record side-by-side 3D, which squeezes two anamorphic frames into a single Full HD resolution, although it can for maximum compatibility. Instead, two Full HD video streams are captured, promising much greater detail in 3D mode. To take advantage of this, the GS-TD1 records at a maximum data rate of 34Mbits/sec in 3D mode, although 2D mode is still limited by the constraints of the AVCHD standard, so tops out at 24Mbits/sec.

There is a 64GB allocation of Flash memory on board, enough for four hours of footage at the top 3D quality setting, and nearly six hours at the top 2D quality setting. This can be further extended via the single SDXC-compatible SD card slot. A big blue-illuminated button on the rear switches between 2D and 3D modes.

We’ve also noticed that, when camcorders grab two frames within the area of a single CMOS, image quality drops dramatically in 3D mode due to the fact that each side of the stereoscopic picture has been squeezed into half the sensor. With the GS-TD1, there’s an entire 1/4.1in sensor for each side, which isn’t massive but better than half of any other current consumer 3D camcorder’s CMOSes, and will benefit from the back-illuminated technology too. So low light performance should, in theory, be significantly better than other 3D camcorders. 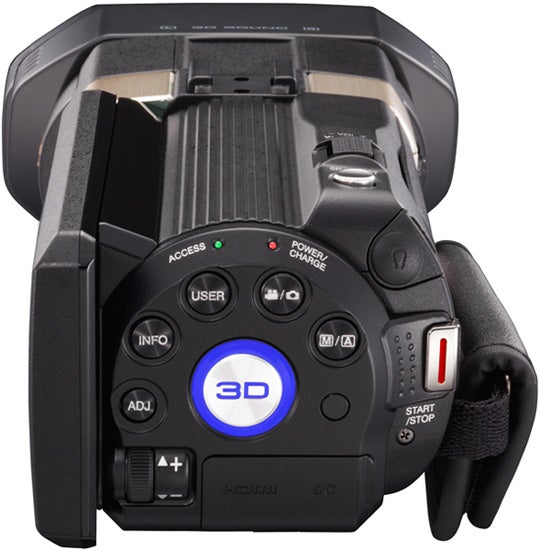 As with the Everio GZ-HM960, JVC has equipped the GS-TD1 with a LCD display incorporating parallax barrier technology. So you can see the 3D effect as you shoot, without the need for special glasses. This system is nowhere near as effective as shutter glasses, but it’s about the best currently possible without extra paraphernalia, and gives you the sense of depth required as you shoot.

The GS-TD1 has all the necessary physical features for enthusiast users, too. There’s a standard-sized accessory shoe, so you can connect third-party peripherals such as a radio mic receiver, with a minijack input nearby on the bottom edge of the lens body. Another minijack is available at the rear of the device for hooking up headphones to monitor your audio levels.

Strangely, a large part of the camera body is taken up by an internal battery compartment. This is considerably bigger than the 1460mAh unit included in the box, so although we don’t usually approve of captured batteries, at least in this case there are options for greater capacities if desired. Also strange is use of a manually operated lens cover, rather than one which opens automatically when you turn the camcorder on.

Although the GS-TD1 doesn’t offer a lens ring, it still provides a commendable selection of manual controls and enough buttons to make these easy to access. In manual mode, the Adjust button on the rear provides access to an array of settings, which are then adjusted by a nearby wheel. Press and hold to call up the menu, or press once to adjust the current parameter.

The available settings include brightness, focus, shutter speed, aperture, white balance, and parallax. Aperture and shutter speed can be configured separately, but not at the same time as brightness. The parallax adjustment lets you widen or shorten the separation of the two sides of the stereoscopic image. Although the image should be calibrated already, you may want to make changes for various creative reasons. There’s also a User button which can be assigned with a range of functions, to provide immediate access. 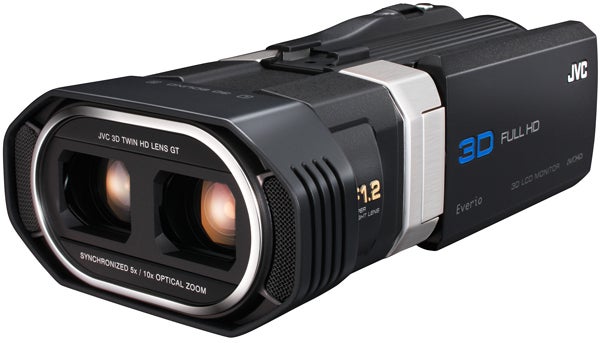 With its duo of 1/4.1in CMOS sensors, the GS-TD1 promises decent, if not absolutely high-end image quality. In good light, colour fidelity and detail are excellent whether you’re shooting 2D or 3D. The 3D effect is very respectable for objects more than a meter away, when viewed on a large 3D TV. As we predicted, low light performance is noticeably superior in 3D mode than other models we’ve tested. Colours are not quite as faithful as 2D mode, but the level of brightness is similar.

However, the dual-Full HD recording does have its drawbacks. This uses a proprietary MP4 format, which will appear to non-compatible editing apps as 1080/50p footage. We found this played in Windows Media Player as if it was just 2D footage. Pixela’s Everio MediaBrowser 3D is provided for converting the MP4s, so you can output them to sites like Facebook and iTunes in 2D mode, and YouTube in 3D mode. The 2D and 3D AVCHD formats are more widely compatible, however. The 3D version uses the now-standard side-by-side system, so you could even upload this manually to YouTube, add a tag, and watch it using anaglyphic glasses. The other alternative is to use the GS-TD1’s Mini HDMI connection to output directly to a TV. The GS-TD1 will convert its MP4 footage to side-by-side, so most 3D TVs will be able to handle it.

Although we’re still not entirely convinced by 3D either as a domestic viewing format or for grabbing your home movies, JVC has at least created a product with potential to cross over into the semi-professional arena. Where the Panasonic consumer models so far have been very limited in 3D mode, the GS-TD1 behaves similarly whether you’re shooting with or without the third dimension. This makes greater creative possibilities available, so the GS-TD1 has the potential to appeal to student filmmakers or even experimental videographers on a budget. Unfortunately, the price is at least £1,400 from most stores, so only the very richest hobbyists will be interested. But otherwise this is the most competent consumer-oriented 3D camcorder yet.