After a protracted absence from the UK home-cinema scene – caused, I suspect, by the company’s merger with Kenwood – JVC is finally on the verge of launching some new projectors in the UK.

Following my surprisingly unsatisfying early look at the new X5000 entry-level model at IFA, I’ve now had the opportunity to spend some time with a pre-production sample of JVC’s new flagship X9000.

Actually, I’ve also had a much more promising play with another pre-production unit of the X5000 in the comfort of my own test room. I’ll come back to my findings briefly at the end of this X9000 preview.

As usual with JVC’s top-end projectors, the idea behind the X9000 is that it’s built using only the very best optical elements, hand-picked off the production line by JVC’s engineers. This sounds gimmicky, I know – especially since, at £8,499, the X9000 costs nearly £3,000 more than the step-down X7000B.

However, I’ve personally witnessed the difference this hand-picked optical approach can make in previous JVC generations, and according to the company’s spec sheets, it yields significant brightness and contrast benefits here too. 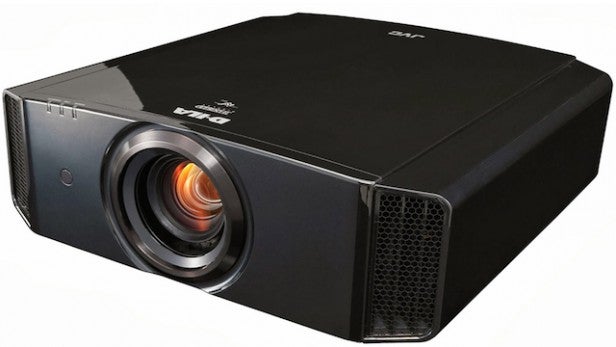 In my own test room – with my own tried-and-tested demo material – the X9000’s contrast performance was immense. It hits black levels not even JVC has hit before, making them the deepest black levels I’ve seen on any projector. Not a bad claim to fame given that many home-cinema fans consider black-level response to be the foundation of good picture quality.

Helping to make these stellar black levels look even more dramatic is the X9000’s striking brightness.

There was a time when a lack of lumens was pretty much the only weakness in JVC’s D-ILA projection system, but the X9000 continues the progress made in the past couple of D-ILA generations in delivering pictures that now look startlingly dynamic and vibrant.

So much so that I think the X9000 might end up claiming an important USP when full review samples rolll out: HDR prowess.

Certainly, no other projector I’ve seen bar, perhaps, some of the megabucks offerings of SIM2, has produced such a boldly dynamic picture, with so much range between its blackest blacks and brightest whites. This is just what you want to see when you’re watching HDR.

While there is potential for such laser technology used in the recently tested Epson LS10000 to outshine – literally – the X9000’s brightness, I haven’t seen any evidence suggesting the tech is ready to compete with JVC in terms of black level.

Perhaps the best way to think about this is the X9000 could carry the same HDR appeal in the projection world that LG’s OLED models carry in the TV world. In other words, even if they can’t achieve the most extreme levels of HDR luminance, they can at elast frame their expanded dynamic range images against a more profound and cinematic black-level starting point.

The only pity here is that I wasn’t provided with any HDR content with which I might test my theory on this preview X9000, so we’ll have to wait for the final review sample to arrive to see if I’m right.

It was also good to see that the X9000 pre-production unit suffered none of the processing noise issues witnessed with the X5000 demo. In addition, its colour handling looks arguably even more refined than it has been on previous JVC flagships – possibly because it has that bit more brightness and contrast to work with when expressing its colour palette. 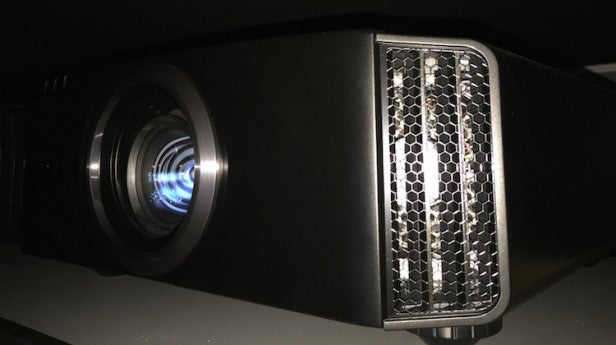 The X9000 does have one potentially significant problem, though. Although it’s capable of taking in 4K UHD feeds, and uses complex “e-Shift” technology to try to recreate 4K pixel density from its Full HD D-ILA chipsets, it was clear during my preview that it doesn’t render 4K sources with anywhere near as much detail as a true 4K projector – such as the similarly priced Sony VW520ES.

On a less important note, the X9000 also struck me as running quite noisily when using its lamp in its brightest mode.

There’s scope for both of these issues to be improved between now and the X9000’s November release, though. And even if they aren’t, I still feel from what I’ve seen so far that the X9000 has the potential to be this year’s HDR hero.

As promised, I want to add a quick word about the X5000. For having now had the opportunity to use an X5000 in my own test room, and actually adjust some of its settings for myself, I’m feeling far more upbeat about JVC’s new entry-level projector.

Certainly, I managed to get it to deliver black levels much more in line with the sort of depths I’d expect from a JVC projector, and it was also possible to remove pretty much all of the noise that was such an issue during the IFA demo.

Fingers crossed that, when the X5000 finally arrives, it finishes the job of blotting that bizarre IFA experience from my memory.