Usually the arrival of any new JVC projector is a cause for celebration. However, on paper the JVC DLA-X90 we’re looking at today could be an unusually hard sell despite being JVC’s flagship 2012 model. For, rather than introducing any radical new features over the mid-range – and brilliant – JVC X70 model we tested back in March, the X90 is to some extent ‘just’ a fine-tuned version of its substantially cheaper sibling.

Essentially what JVC has done with the X90 is hand-select only the very best quality optical components for the X70 as they’ve rolled off the production line and syphoned them off to build X90s. Clearly the suspicion is that this will deliver only an iterative improvement in picture quality that will struggle to justify the three grand extra the X90 costs over the X70. Indeed, we can imagine really die-hard cynics even starting to whisper “snake oil” under their breath. 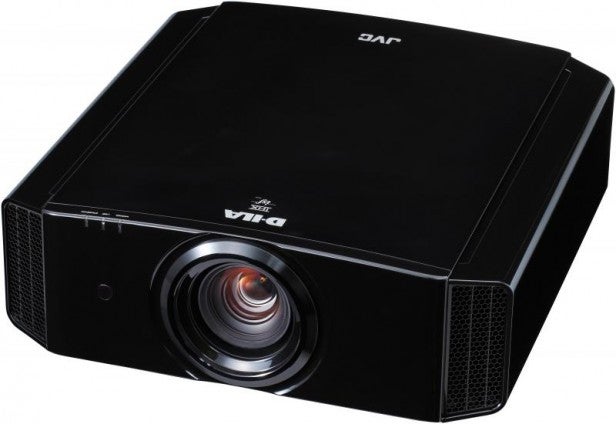 But JVC does actually have some numbers to back up its claims for just what a difference selecting the best components can make? Well, it has a number: 120,000:1. This is the native – repeat, native – contrast ratio JVC claims to have measured from the X90, and it compares very promisingly indeed with the 80,000:1 claimed for the X70.

A 50 per cent increase in contrast would look good in any circumstance, but it’s positively mouthwatering when you’re talking about projectors capable of producing such stupendous contrast ratios without having to resort to any dynamic iris ‘trickery’ like the majority of other digital projectors do.

Better convergence
JVC further claims that using only the finest components will lead to an improvement in the convergence of the images of the three DLA chipsets at the JVC DLA-X90’s heart – something that could prove particularly important on the X90 given that it sports JVC’s new e-Shift technology.

First seen on the X70, e-Shifting essentially sees HD pictures being reproduced twice, the second image being shifted one pixel diagonally up from the first one, the idea being to essentially double the number of pixels that create the image and thus improve that image’s sense of density and perceived brightness.

JVC likes to claim that e-Shifting results in a finished resolution for its X70 and X90 pictures of 3,840 x 2,160 pixels. We suppose in one sense this is true. But this certainly does not make the X70 or X90 true 4k projectors in the way that the Sony VW1000ES is. For the e-Shift system doesn’t actually add any real picture information to HD sources; it’s not an upscaler, just a pixel ‘doubler’. JVC’s e-Shift projectors can’t even receive true 4k-resolution sources either, much less display them in their native resolution. 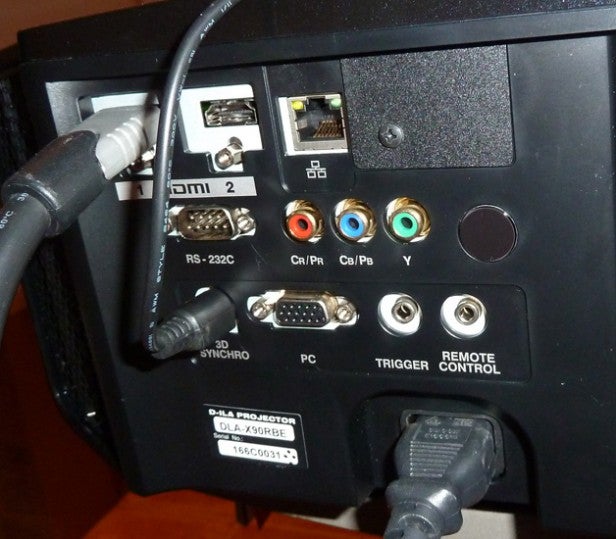 We’re not intending to knock e-Shift here, by the way. On the contrary, its abilities were generally much appreciated on the X70, and as noted a couple of paragraphs ago we have even higher hopes for it on the X90 given the potential greater precision of its optics. We just want to make sure nobody thinks they’re buying into the full 4k dream by getting an X70 or X90.

Nth degree calibration
While the vast majority of the X90s differences from the X70 come from the grade of its optical components, the X90 does have one extra feature the X70 does not: the facility to calibrate its colour profile via a PC connected to a built-in RJ45 port, courtesy of  proprietary software you or an installer can download from JVC’s website. This clearly opens the door to the X90 becoming a firm favourite among professional installation companies, as well as allowing the sort of serious cinephile likely to spend £10k on a projector exactly the sort of nth degree fine tuning they’ll probably desire.

The JVC DLA-X90 sports the same heavy design as the X70, with its distinctive cooling ‘wings’ down each side, and is impressively compact by the standards of the £10k projector market.

It’s pretty well connected too, with the usual two HDMIs (surprisingly few projectors, even high end ones, offer more than two), the aforementioned RJ45 port, a component video input, a PC port, a 12v trigger port, a hard-wired remote port, and an RS-232 for system control. Plus there’s a port for attaching the external 3D transmitter.

External 3D transmitter
The fact that the 3D transmitter isn’t built into the JVC DLA-X90’s bodywork could irritate some folk, we guess. But actually it doesn’t bother us at all; in fact, we can readily imagine room set ups where being able to position the transmitter away from the main projector body could actually be helpful.

Although the transmitter isn’t built into the projector, it is given away free with the projector in the UK – as are two pairs of 3D glasses. 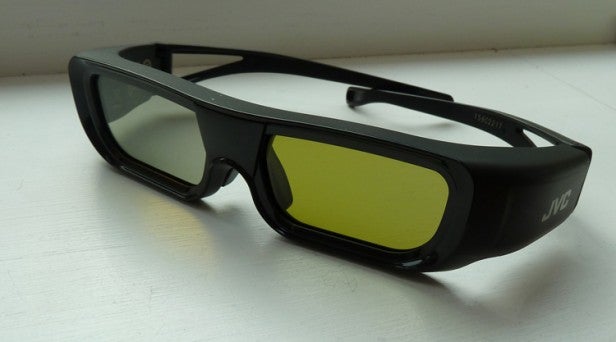 Further signs of the X90’s high-end credentials include its carriage of full gamma and colour management internally if you don’t/can’t take advantage of the external PC calibration system, and its endorsement by both the Imaging Science Foundation (ISF) and THX.

Beginning our tests with 2D material, with those concerns about whether the X90 can really get away with costing £3k more than the immaculate X70 ringing in our ears, we were rather startled by just how quickly those doubts were quashed. For the X90’s advantages are immediately clear rather than just being something you only see over time, or if you really go looking for them with a fine-toothed comb.

Razor sharp
As hoped, for instance, the greater precision of the JVC X90’s optics does indeed give an extra dimension of impact to the e-Shift technology, making images look even more pixel – or semi-pixel – perfect than they did on the already preternaturally sharp X70. Indeed, so extreme is the X90’s detailing and clarity that you can’t help but feel that without e-Shift, 2D pictures would maybe have looked a little too forensic, highlighting the mechanics behind the picture’s production to the detriment of the image as a whole.

Another way to think about what the combination of e-Shift and the X90’s awesome optics allows the projector to achieve is to imagine the gorgeously polished, smooth, dense image of a high-quality 55in TV doubled in sized without any hint of the pixel-wielding technology that’s behind it. 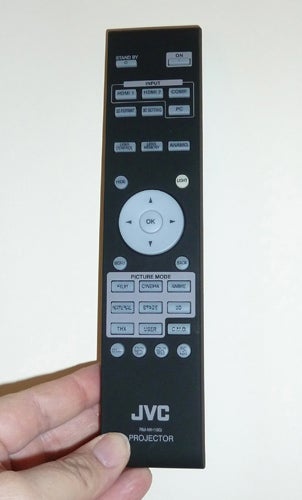 Even more outstanding, though less surprising, is the X90’s black level impact. In a fully blacked-out room, dark scenes look even more contrast-rich, believable and immersive than they did on the X70. Which means pretty much by default that dark scenes look richer and more believable than they do on almost any home cinema projector – including many of Sim2‘s glorious output. Especially as the DLA optics system can deliver such immensely deep blacks without needing the aid of a dynamic iris, so that dark scenes look wonderfully stable and uniform.

To be clear, you do need to be watching in a totally dark room to fully appreciate the X90’s contrast improvement over the X70; let any ambient light in and the black level difference reduces to pretty much zero. But as noted earlier, surely anyone with the best part of £10k to splurge on a projector will be installing it into a place where full justice can be done to it.

The extra convergence accuracy that seems to boost the JVC DLA-X90’s detail resolution also helps colours enjoy slightly more precision in terms of their blends and edges than you get with the X70, and tones additionally have a fraction more punch on account of the X90’s contrast enhancement.

The fact that the sort of improvements we’re talking about here are being made to a 2D picture performance that already blew the competition out of the water with the X70 almost beggars belief. But, as they say, seeing is believing.

Switching to 3D, the X90 is almost amazing. Though you wouldn’t guess this right away…

3D oddity
First of all, the e-Shifting technology doesn’t work with 3D, so you initially feel a tangible (though thankfully quickly forgotten) sense of sharpness loss in the switch from 2D. Much worse, though, is the fact that the projector bizarrely doesn’t automatically switch to its dedicated 3D picture preset when it detects a 3D input, despite the fact that if you don’t use this preset, 3D images tend to look short of brightness, low on colour and beset by crosstalk ghosting noise to a most unpleasant degree.

Thankfully, engaging the 3D mode – or a tweaked version of this if you wish – instantly makes things look a million times better, as colours become both more natural and more vibrant, while sharpness levels increase dramatically (not least because crosstalk decreases dramatically) and the 3D effect becomes markedly more pronounced. 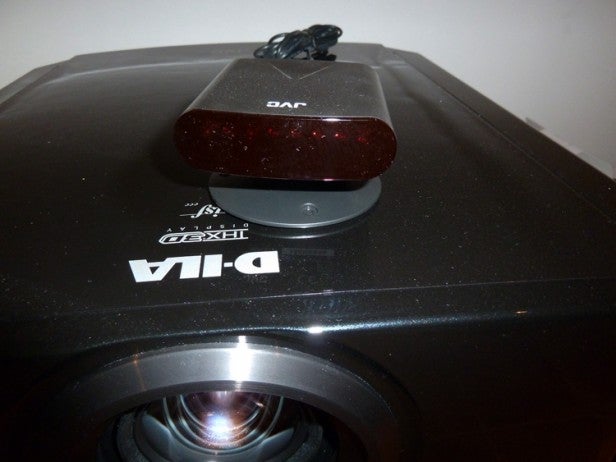 It’s actually quite scary to think how many people might feel let down by the JVC DLA-X90’s 3D performance just because it doesn’t default to the 3D setting. And it’s sad as well, for with the 3D mode engaged 3D pictures mostly look excellent – especially where detail levels and colour balances are concerned.

Even at their best, though, it has to be said that the X90 betrays a touch more crosstalk than you get with true 3D heroes like Sim2’s Nero models or the Sony VW1000ES. There’s a touch of judder and blurring in the projector’s 3D motion handling too, and a touch more brightness wouldn’t have gone amiss. JVC’s latest 3D glasses are also a step in the wrong direction, as they sit too high on your nose and use over-narrow lenses, which let too much of the world outside your projection screen intrude into your field of view. Despite all this, though, overall it’s the X90’s colour and detail with 3D that still dominate your experience.

The last point to cover is the JVC DLA-X90’s running noise. Which we’re pleased to report is rather impressive, running almost silently with its lamp set low for 2D viewing, but still being pretty subdued and certainly very even with its noise tone when it shifts up a gear for 3D viewing.

Verdict
All-in-all we guess the JVC DLA-X90’s performance can still only be called an iterative evolution of the X70’s performance. But the degree of evolution is actually greater than we’d expected, and as such there’s ample excuse – provided your home cinema room is good enough – for finding the extra money you need to step up from the mighty X70 to the truly imperious X90.