The X700R is a home cinema projector using the contrast-rich DLA optical system and JVC’s potentially controversial e-Shift 4K technology. This delivers a sort-of-4K resolution effect without actually being a true 4K projector – a confusing state of affairs given an extra frisson by the fact that the X700R’s £7300 price sits potentially dangerously close to the £8,800 you’ll need for the native 4K Sony VW500 projector.

It’s very much a case of ‘been there, done that’ with the X700R’s design. It’s absolutely identical to JVC projectors of seasons past with its low-slung, wide, angular shape adorned in a glossy black livery with two venting ‘wings’ on each side and a large centrally placed lens on the front edge.

The most interesting things about its design are its reasonably small footprint for a high-end projector, and the THX and ISF logos adorning its top edge. 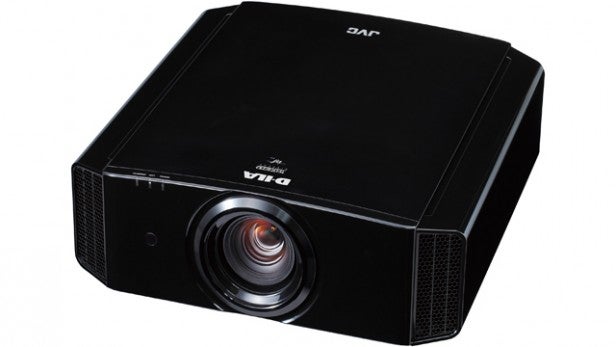 These logos indicate that the X700R has sought and gained the endorsement of two significant independent third party organisations. The THX group only allows products to use its badge if they’ve passed a stringent set of performance criteria, while the ISF name is only usable if a product is deemed sufficiently rich in picture tools to support an in-depth calibration by one of the ISF’s trained experts. It’s worth adding, moreover, that the THX certification is for 3D as well as 2D playback.

Connections on the X700R’s rear comprise two HDMIs, a LAN port, a socket for plugging in a provided 3D transmitter, a 12V trigger port, and an RS-232C jack for system integration.

The HDMIs are more interesting than most because unlike those found on last year’s JVC e-Shift 4K projectors, these ones can receive 4K video (even up to 60p, albeit only at 8-bit with 4:2:0 colour sampling). However, the projector can’t output 4K inputs in their native 4K resolution. Confused? Guess we’d best try to explain this e-shift 4K malarkey, then!

As simply as possible, e-shift 4K puts two full HD-resolution chips in sequence, with one offset from the other by half a picture up and sideways. This results in a picture with twice as many smaller pixels in than you’d get with a single full HD chipset, enhancing the sense of pixel density and (potentially) detail in the image – handy when you’re talking about pictures as big as those a projector is capable of producing.

However, the images going through the double imaging chips are NOT pixel-for-pixel 4K, even when the source you’ve fed in is native 4K. Feed a 4K signal into the X700R and it will downscale them before pushing them through the imaging system.

This raises a very real question over whether the ability to take in native 4K video is really worthwhile on the X700R or merely a rather disingenuous move by JVC likely to confuse the nascent 4K projection market. To be fair to JVC, though, we have found in other areas of the AV world that content delivered in HD but filmed/created in 4K can deliver slightly cleaner, crisper images. So it’s possible this ‘start with the best source you can’ logic will hold true as the native 4K feeds go through the downscaling and e-shift 4K processing steps in the X700R.

The X700R is on much more solid ground with the rest of its specification. Its claimed contrast ratio, for instance, is nothing short of mind boggling at 1,200,000:1. To be clear, this monstrously high figure (in a world where most projectors struggle to get above 100,000:1) is not a native contrast ratio figure of the sort JVC has traditionally quoted alongside its D-ILA projectors. Instead it’s a dynamic contrast ratio delivered via a new intelligent Lens Aperture (ILA) technology that automatically increases and reduces the amount of light the projector is outputting to suit the brightness or darkness of the content being shown. 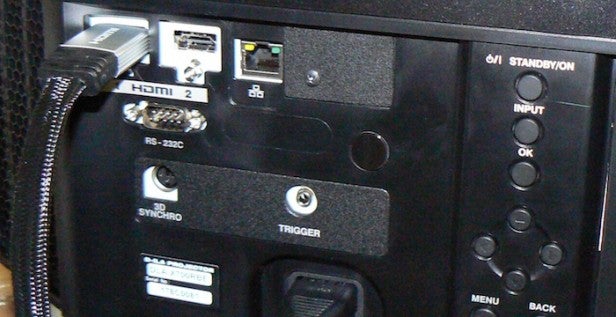 The intelligent lens aperture tech isn’t the only innovation focussed on making JVC’s already legendary projector contrast abilities even more stellar. For JVC additionally claims to have reduced the spacing between each pixel of its latest D-ILA chips by a startling 40%, to reduce light ‘waste’, while there are also new efficiencies in the path the X700R’s light takes through its optical system.

The X700R isn’t the brightest projector in the world with its claimed output of 1300 Lumens. But you should feel more impact from each of these available lumens than you would with a ‘normal’ projector if the X700R delivers on its contrast claims.

The X700R is also a 3D capable projector, shipping in the UK with the necessary 3D RF ‘dongle’ and two pairs of active shutter 3D glasses.

Looking for other unusual or promising features about the X700R, there’s an ‘Environmental’ setting that automatically adjusts images to best match the room environment (though we’d suggest that this is not going to deliver results comparable to having a professional ISF installation carried out).

There’s also a very useful lens memory feature, where you can set up to 10 lens and zoom preset options for different aspect ratio movies when using a 21:9 screen.

Next, JVC has introduced a new Frame Addressing Driver system specifically to ‘cancel’ the crosstalk ghosting 3D problems that were really quite problematic on last year’s JVC projector range. And finally there’s a souped up version of JVC’s Clear Motion Drive processing for improving motion clarity.

Having already been blown away by the X500R model in JVC’s new projection range, which comes in substantially cheaper than the X700R at £5000, we ought to pick out the highlight differences between the two models to pinpoint what your extra £2,300 is getting you with the X700R.

The main – and potentially decisive in itself – difference is that the X500R ‘only’ delivers a native contrast ratio of 60,000:1 and dynamic contrast ratio of 600,000:1. These figures are only half as impressive as those of the X700R – even though they still humble the figures of pretty much every other projector at anything like its £5k price point.

The X500R also only supports half as many lens memory settings as the X700R, and fails to provide the X700R’s calibration-friendly Real Colour Imaging Technology, which allows you to combine picture modes and dedicated colour profiles. One other difference that may interest some is the X700R’s ability to emulate the image characteristics of a Xenon lamp despite actually using a normal 230W UHP one.

The X700R is fantastically easy to set up in terms of getting your images in the right place on your screen. This is because there’s both vertical and horizontal optical image shifting as well as an exceptional amount of optical zoom. Even better, these tools – as well as the projector’s focus system – are all motorised, so you can manipulate them via remote control.

Optimising the X700R’s images can be as straightforward or as complicated as you like. There’s a healthy and reasonably useful array of themed picture presets for people who want to keep things simple, but if you want to eke out every last drop of picture quality you can draw on deeper set-up tools like extremely fulsome colour management systems, white balance fine tuning, gamma fine tuning, and some welcome fine controls over the effects the e-shift technology has on images.

In terms of set up advice, our main tips would be that you don’t bother with the Clear Motion Drive system, as it can cause distracting processing artefacts, and that you set the Enhance element of the e-Shift 4K system down to around 30-35% to reduce grain, and the NR element down to 1 to keep images looking authentic and natural.

You might also want to turn off the intelligent lens aperture system, as while this gives a marginal extra ‘kick’ to the image, it can cause some small brightness stability distractions which we’d argue you don’t really need to be bothered by when you’ve got a projector with a native contrast performance as extreme as that of the X700R.